June 01, 2017
This year seems to be whizzing by faster than a whizzy thing.  We are rushing towards the half-way point in the year.  The garden which had a coldish and a dryish start to the growing season has now had some heat and rain and is growing like crazy. 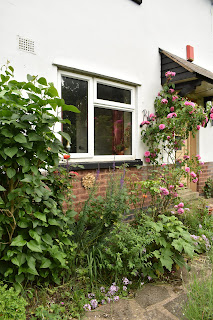 I have been giving this border in the front garden some attention.  Whilst it is not the biggest border you will ever see it is quite difficult to plant up.  The rain shadow from the house means that it gets very dry at times.  It also has serious couch-grass habit.  I struggle to keep on top of it but this year it's been a bit better; maybe because I keep weeding it.  I have also planted some divisions from plants in the back garden into it to give it more structure.  So far it is progressing slowly, but well. 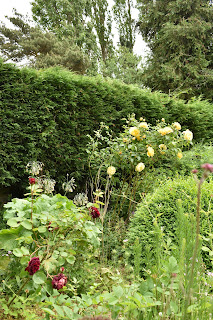 This side part of the Knot Garden rarely gets a mention.  The yellow rose is Graham Thomas and it is a fantastic rose, it flowers repeatedly for weeks.  The red is William Shakespeare, which has struggled  a bit to get going but now seems to be maturing well. 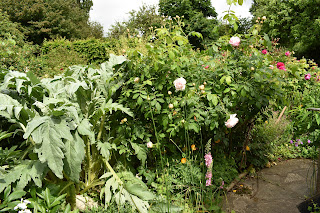 When I walk around to the back garden I am greeted by a flounce of roses and cardoons. There is a sprinkle of orange welsh poppies and a pink verbascum that has been growing in the crack in the crazy paving for several years now.  It is tenacious in refusing to give up. 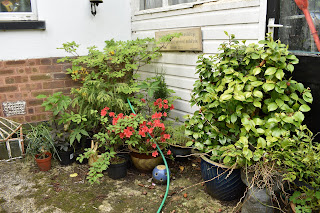 In the courtyard the red azalea is flowering well.  The Rhododendron luteum has not flowered as well as usual and I think it is time that it was taken out of its pot and planted into the garden itself.  I shall have to buy a replacement one though to be in the courtyard as the scent is something I would miss too much. 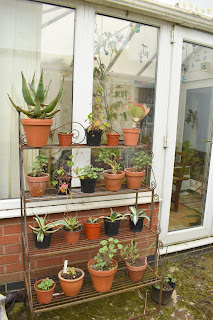 The stand is currently housing spikeys and pelagoniums.  Most got through the winter unharmed. 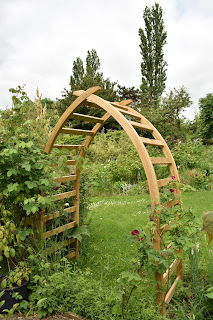 My rather wonderful Forest Whitby Arch, which I adore more than is probably reasonable, is now softening into the garden as the roses grow back around it.  Mme Alfred Carriere to the left and Souvenir du Dr Jarmain to the right. 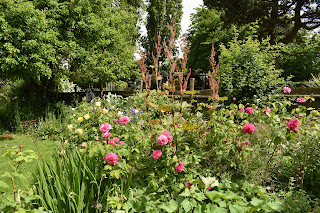 The roses in the Conservatory Border are all doing very well and the scent fills the warm air. 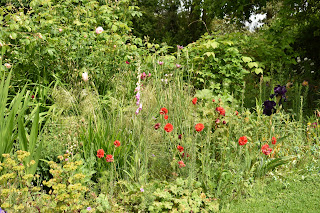 In the Pond Border I am having a love affair with geums, I need more geums. 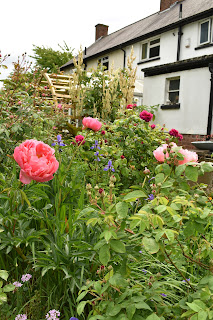 Whereas in the Coal Bunker Border I am infatuated with these coral peonies. 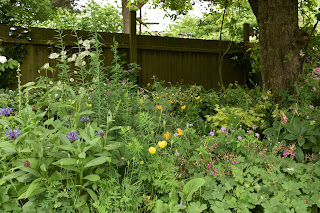 The Spring Border is now past its spring best.  The blue perennial knapweed is adding colour as are various geraniums and welsh poppies.  The small acer has been there for about eight years now and grows slowly but surely. If I turn around and look across the pond I can see the yellow flag irises in the pond and the blue irises beyond in the Pond Border.  They set each other off perfectly. 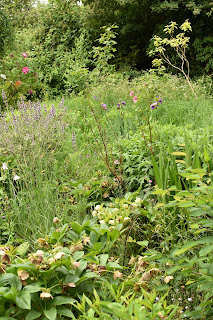 The Woodland Border is a haze of purple sage.  It is becoming a good border. 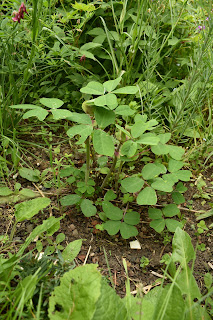 My precious Amicia zygomeris is growing well.  Every year I worry it will not return, but so far so good. 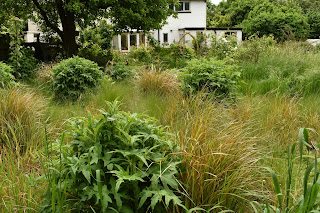 The Prairie Borders are growing back well now after their spring cut. 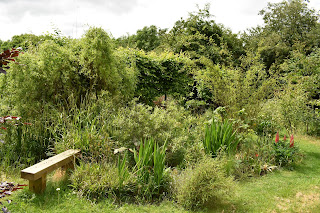 and the Exotic Border does not look hugely exotic yet, but give it a few more weeks. 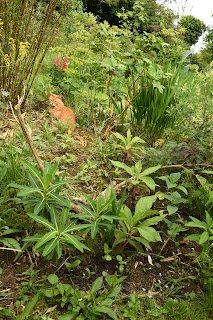 It looks a little more exotic from this direction as you can see the echiums that I have planted out.  There is also a Bruce in this picture, he is not very exotic. 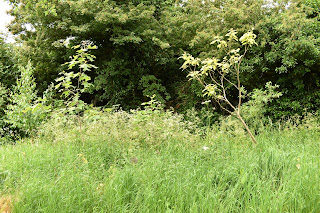 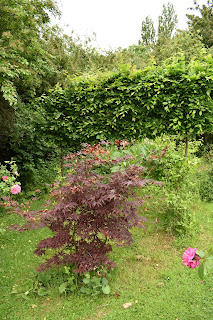 The Four Sisters are coming on but the Carol Klein acer has got wind burned again.  Now this troubles me as I planted it there as it was sheltered.  Suddenly last year it started to get burned, I cannot work out what has changed unless we are getting wind from a different direction? 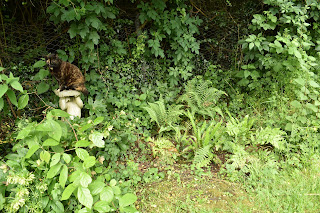 Esme keeps watch over the fernery from her plinth. 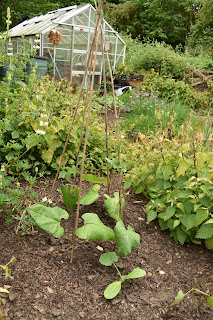 There are some veg in the veg borders.  I planted a few runner and cobra beans and a courgette (singular). 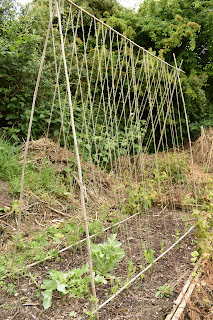 The recently planted out sweetpeas are also in the veg beds.  I need them to be slow to flower as I must have some in October for my daughter's wedding. 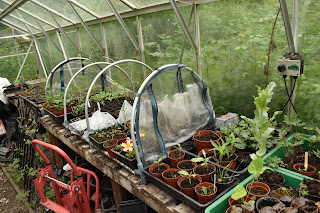 and the greenhouse is fairly full of germinating seeds and potted on seedlings. 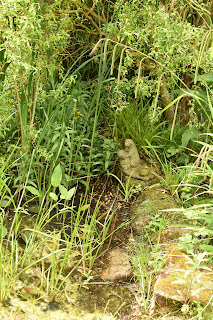 The pond edge has a new occupant, my memento from RHS Chelsea Flower Show, Ray the otter.  He is quite small yet for some reason makes me very happy. 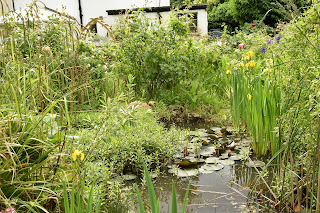 I end as ever on the pond.  It is a little gunked up in places but the parrot weed is far more under control this year so that is good.  The newts ate every tadpole, every single one.