and then it got hot

June 18, 2017
Suddenly after a somewhat chilly start to spring, June has galloped into action by firstly providing lots of rain and then almost without warning, a heatwave.  Now us Brits are used to newspapers and TV telling us we are going to have a heatwave but they do not always appear.  This weekend, suddenly, we were plunged into a bone fide, flipping hot, heatwave. 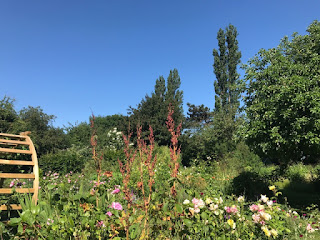 I had lots to do this weekend in the garden so I got ahead of the game by cutting the lawns when I got in from work on Friday. 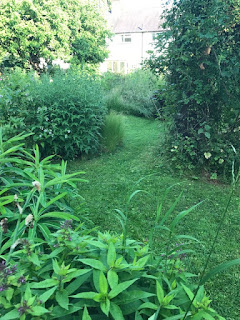 This has become an increasing habit this year and it fulfills two purposes.  Firstly it is the best detox to the week I can think of.  After an hour or so of mowing things that are worrying me, forcing itself to the front of my mind, are muted by grass clippings and hopefully put away until Monday.  Secondly it means I am ahead for the weekend.  I do not have to consider getting the lawn cut on either Saturday or Sunday, I can just pile into the weekend gardening jobs...... 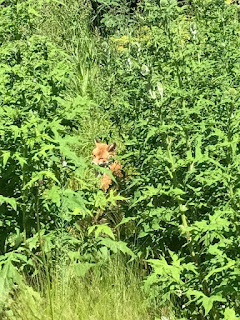 ...... except this weekend it was hot by 10am and by noon it was (gosh I hate saying this, but this time it is true), too hot to get anything meaningful done in the garden.   I found this fox nestling into the shady parts of the Prairie Borders. 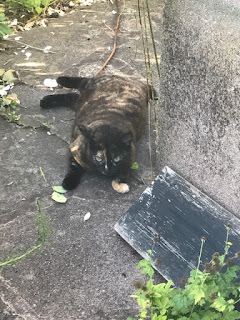 Esme was spreading herself on the shady concrete by the coal bunker.  She seems to have been trying to get as much of her as possible flattened onto the cool path. 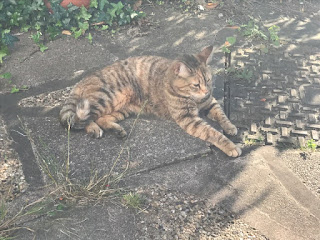 Whereas Flossy, who is a heat-seeking kind of cat, went more the for the dappled shade approach where she arranged herself in a lady like manner.  Flossy never lets me forget that she is the Audrey Hepburn of cats. 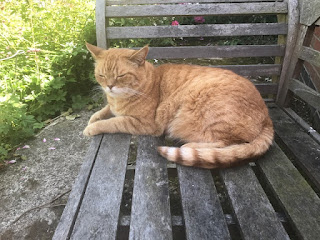 and as for his gingerness, well he was in wise Yoda mood and chose the shady end of the bench.  For most of the day he was not visible at all, he was in some shady spot in the garden keeping as cool as possible.  If Flossy is Audrey Hepburn then Bruce is the Fonz.  Now I have to think who Esme is, I think she is probably George from the Famous Five;  either that or she is Boudicca for I am pretty sure she was a warrior queen in a former life. 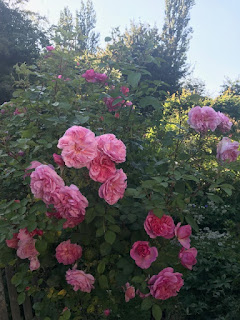 I managed some planting out fairly early on but by lunchtime I was struggling. I also knew it was only going to get hotter.  The heat brought out the scent of the roses magnificently in the garden, but I knew I would have to give up and go indoors.  This always seems a shame when it is so glorious outside but I know (because Noel Coward tells us) that only mad dogs and Englishmen go out in the midday sun and I am neither.