May 23, 2017
RHS Chelsea Flower is one of my favourite events of the year.  This year though, even as I travelled up to London on a very early train, I already knew that it would not be like other years.  I had read a couple of articles and watched the first of the BBC coverage and it was clear that this year's show was not the same as usual and that Brexit was getting the blame.

When the show brochure arrived a few days ago the show map at the back confirmed that this show looked different.  There are fewer show gardens and it also seemed like fewer artisan gardens as well.  There were also several 'feature' gardens, that were not included in the judging.  Clearly the RHS were looking at ways to fill the space and whilst one could be cynical about this, in reality it seemed to me that they had done a good job.  They had had to think imaginatively; for starters there are more places to sit.  There are some nice picnic areas where usually there are none.  Regular visitors will know that at certain times in the day finding a place to sit can be quite hard, so this was a good thing.

That the RHS have not been able to host the same amount of show gardens as usual is clearly a concern, but the unexpected consequence of this has been the creation of breathing space.  This might not be economically welcome in terms of revenue, but for the busy crowds that visit I think it will be appreciated as moments of respite. 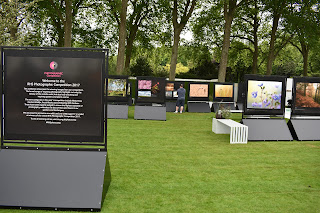 The Feel Good Gardens are a good thing.  They are a suite of gardens to celebrate Radio 2's 50th anniversary that are based on the five senses.  These gardens are really good, they have good planting and, had they not have been commissioned by the RHS and therefore not included in the judging, they are indeed worthy of being judged. 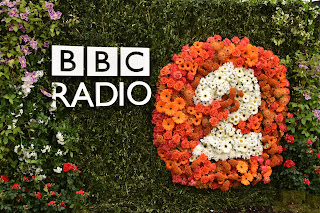 The Zoe Ball Listening Garden, designed by James Alexander Sinclair, throbs.  People say to you when you are near by, go and put your foot on the gravel, feel it.  It is a brilliant concept. 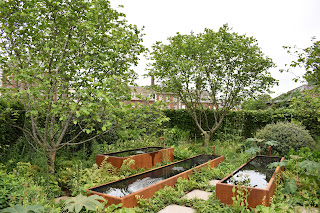 The Chris Evans Taste Garden designed by Jon Wheatley was superbly planted. If vegetables are your thing, this garden is for you. 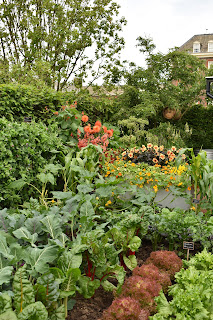 The Jeremy Vine Texture Garden, designed by Matt Keightley might have been my favourite.  It was hard to decide, the planting is exquisite. 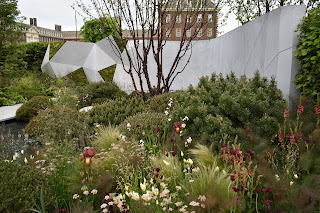 But then the Jo Wiley Scent Garden designed by Tamara Bridge and Kate Savill was very close in terms of superb planting and the feature curved stone bench is a delight. 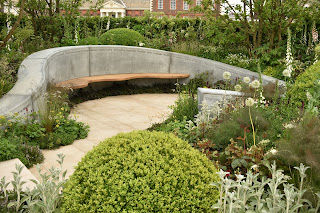 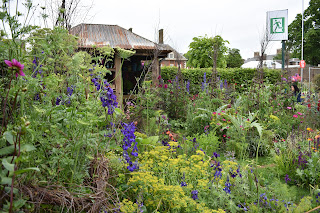 Whilst talking about the feature gardens I have to also mention Professor Nigel Dunnett's Greening Grey Britain garden which apparently includes the first street art in an RHS Chelsea Flower Show garden, was very special.  This is despite me making a pillock of myself by mis-describing Sambucus nigra as angelica (you know when your mouth starts to say something and you know its wrong - that). 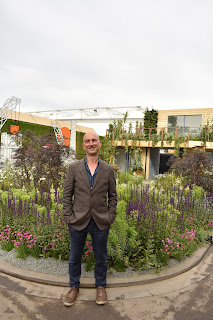 The man himself - Prof Nigel Dunnett 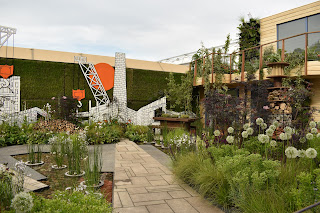 In terms of show gardens, there might not be many, but they cover a wide spectrum in style.  The judging, which let's face it is sometimes a bit contentious, has again delivered some surprising results.

The M&G Garden by James Basson won a gold medal.  It oozed gold, there was no way this garden was not going to get gold.  It is a stunning garden that impacts on the senses in terms of how high it is and also how in contrast how flat it is.  The concept is the botanical flora in a disused lime quarry in Malta and it is a very different landscape to what you might usually expect to see.  It is beautiful and skillfully planted.  You are unlikely to rush home and copy the planting in your gardens but that is not what Chelsea is always about.  This garden is more akin to living art and works brilliantly.  I liked it a lot.  Interestingly it is one of those gardens that when I look back on the photographs they do not give the sense of the garden that seeing it in reality does.  You can put that down to my poor photography skills. 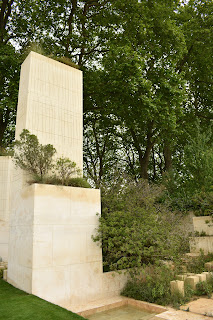 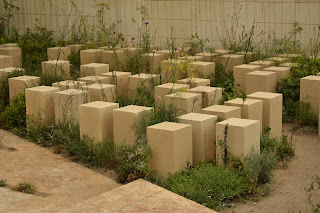 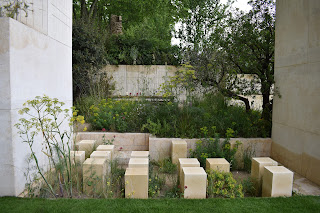 The Morgan Stanley Garden by Chris Beardshaw received Silver-Gilt, now I think that Mr Beardshaw could rightly feel a bit miffed by this.  It is a brilliantly planted garden and is a total contrast to the James Basson garden above in that it is more accessible as planting styles you can copy.  There is great use of topiary and the space flows.  I have to suggest that this garden must be a strong contender for the People's Choice. 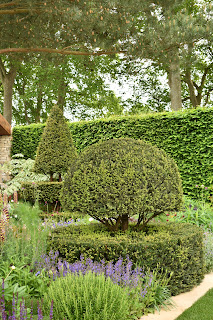 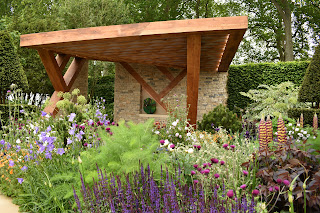 An equal contender, if people can find it (and make sure you do if you visit), is the Linklater's Garden for Maggie's by Darren Hawkes.  The garden is hidden behind high hedges that you peak through or look down upon.  It is a delight to discover and needs time to look at as there are many clever details in the brilliant planting.  I stood looking at it for quite a while.  It won a gold medal and so it should. 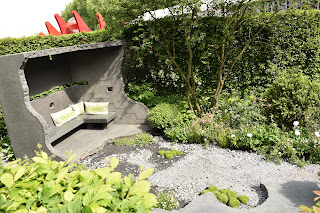 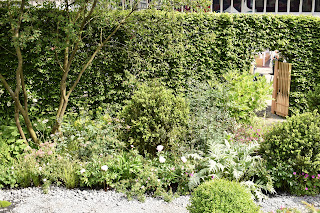 The Royal Bank of Canada Garden by Charlotte Harris is also a gold medal winner.  Again rightly so, I liked this garden a lot.  It has great use of colour and of pines.  I have moved from being a general conifer disliker (apart from gingkos whom I adore) to a pine lover. 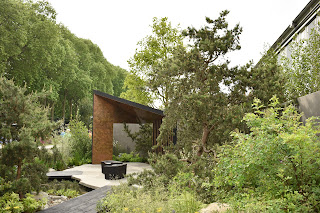 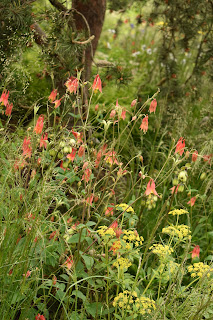 Lupins are the plant of the show, and used to great effect in the 500 Years of Covent Garden: The Sir Simon Milton Foundation Garden in partnership with Capco by Lee Bestall which surprisingly (to me) received a silver medal.  I thought it a good garden, it demonstrated the history of Covent Garden well with its use of apple trees from its orchard origins. 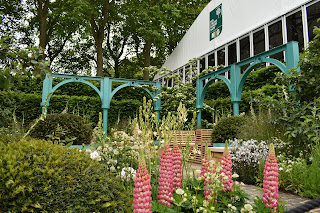 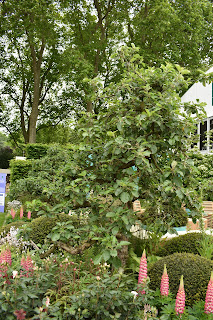 Finally for this post I will mention the Silk Road Garden, Chengdu, China by Laurie Chetwood and Patrick Collins.  This garden occupies a huge space and it very brightly coloured.  You have to take a moment to look beyond the colourful structure and actually look at the planting.  I know I partly liked this garden as many years ago I bought a set of three silk handbags (as you do) and they were shades of the red used in the garden. 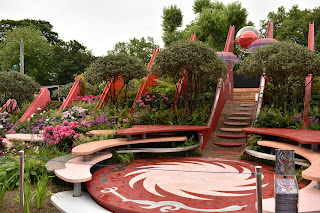 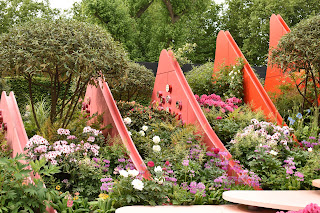 I have not covered all the show gardens in this post (I have to save some for later!) and also the artisan gardens and the always wonderful Floral Pavilion.  I end by remarking on how warm it was and is due to be this week.  The sun came out, I had to buy hat as I had forgotten mine and I considered how nice it is when it is a little 'otter. 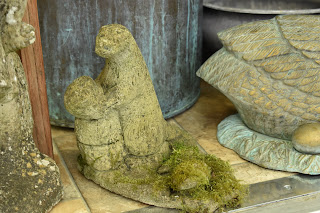 (if the otter is still there tomorrow when I go back I might have to buy it).