April 16, 2017
I was asked if I would like to receive a couple of items from Qwerkity's gardening range so that I could review them.  I happily said yes and then waiting for my mystery parcel to arrive.  I had not chosen the gifts so that made it a bit exciting to see what would arrive.

A few days later the parcel arrived.  This in itself was good, it arrived quickly and with no fuss.  I like a no-fuss delivery.

The first gift was this rather lovely  William Morris Tool Tidy bag made by Briers. 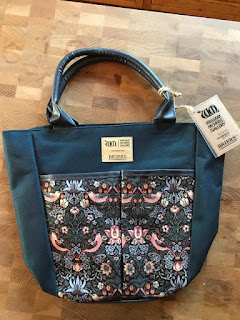 I do rather like a bit of William Morris so the design appealed to me.  The bag outer is made of cotton canvas and it is plastic lined so that it is wipe clean inside.  It is well made and feels quite sturdy.  I loaded it up with some tools and was just about to go into the garden when I realised I had not got enough hands to carry all the seeds I was about to sow.  I popped them into the bag and out I went. 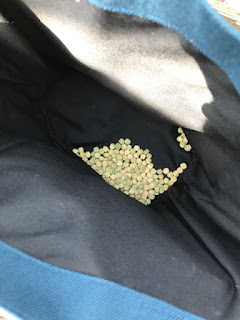 This is when I realised that the peas I was about to sow had a hole in the packet and spilled out into the bag.  At least they had not gone all over the floor, so the bag was already being useful.  This bag would make a thoughtful gift for a gardening relative/friend.  I certainly was happy to receive it.  The bag is currently retailing at £14.99

The second gift was Rachet Secateurs made by Kent and Stowe. 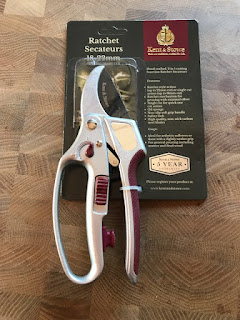 The secateurs have a non-slip soft grip handle and a safety lock.  The blades are made of non-stick carbon.  The secateurs have two cutting actions, a single cut action that can tackle up to 18mm and a ratchet style action that can handle up to 22mm.  The packaging says that they are for general pruning including mature and dead wood.  So I popped them into my Tool Tidy bag and took them outside for a spin/cut.

The single cut is as you would expect from a pair of secateurs.  The blades are nicely sharp and they snipped through stems with ease.  Then I wandered up to the top of the garden to look at the mahonia that has recently taken a turn for the worse.  I had been advised to cut it back to see if that would invigorate it so it was a good test for the secateurs. 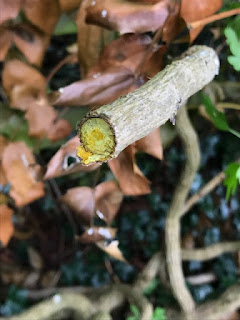 If you have ever pruned a mahonia you will know that they are very woody.  The ratchet action made short work of cutting through the stems, though for the very thick ones I did use a pruning saw which was what I had expected to do.

The secateurs are lightweight and it says on the packaging they are good for people with a slightly weaker grip.  I found them very easy to use and whilst I had at first wondered if they were too lightweight, they have coped well with what I have been expecting them to do.  These retail currently for £14.99 and I think they are very good value.

Overall I am happy to recommend the two gifts and the service I received from Qwerkity.
Briers Kent & Stowe Qwerkity Ratchet Secateurs Tool Tidy William Morris