Irritating Plant of the Month - April 2017, the Painted Fern

April 23, 2017
So there I am, weeding the Woodland Border the other day, and musing to myself about what would be the irritating plant this month.  I am fairly happy with my garden at the moment, spring has sprung and things are growing.  The tulips are in full flower at the moment and the fruit trees are starting to blossom.  It is all about as hunky dory as it gets.  Not for the first time recently I wondered if maybe this month I would give this post a miss as I am not going to force myself to identify something. 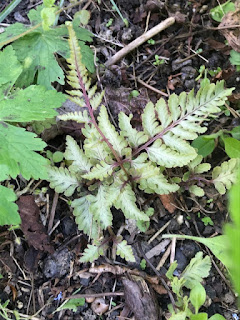 Athyrium niponicum possibly Vidalli.  A great name and on all the pictures a great fern, but for me it is generally an unhappy, sulky, unco-operative plant.  Whilst thinking about writing this post I looked it up and apparently it is very good for shady areas.  At which point the history of this plant came flooding back to me.

I bought this plant probably nine years ago and I thought it was perfect for putting into the shady bit of border around the Bramley tree.  The area is not that dry and I thought it would be happy enough there.  Well it sulked, its two companions that were in the same collection upped and died and several times I thought this one was dead as well.  After a couple of years I decided I had sited it in the wrong place.  Maybe this shade loving fern was not getting enough light?  So I dug it up and moved it into the Woodland Border, which despite the name, is not the most shady of areas in the garden.

Several years later and quite frankly it just has not improved.  It still throws up the odd leaf and generally looks pathetic.  I am currently considering relocating it again into the fernery.  That is a shady part of the garden and quite dank.  The other ferns seem to love it, maybe this will be (in all senses) kill or cure.  I shall think about it.
Athryrium niponicum IPotM Irritating Plant of the Month Vidalli