An apology to laurels

April 13, 2017
Dear reader, it has taken me ten years to reach this point, but I have to hang my head in shame and make an apology.

I have written often that I am not a fan of evergreens unless they are the ones I like.

I have written previously about the laurel that occupied the whole top corner of the garden when I moved in.  I summarily had the laurel cut down but it refused to die.  It refused to die so often I had to give it points for perseverance and in the last couple of years I have let it be.

and then I went to visit Burghley House where I saw this..... 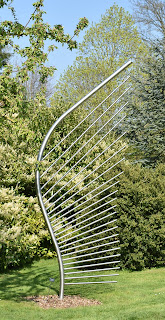 This was taken as a photograph of one of the sculptures, but behind it you can see the flowering laurel.  As we walked around the gardens every now and again we were suddenly aware of a rather pleasant, slightly citressy, fresh scent.  We discussed what it might be and sniffed about as gardeners are want to do.  Heaven knows what the other people visiting thought of us, but we cared not, we were on a mission.  No matter how much we looked around we could not identify it, there was just lots of this flowering laurel instead...... 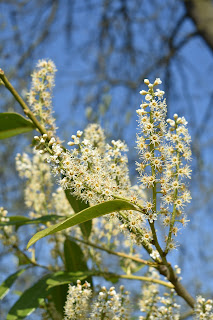 and then we realised it was the flowers on the laurel.  Now I am no fan of laurel, I have declared it boring and just green many a time.  So why had I not realised that a) it flowered, b) it had pretty flowers and c) it had scented pretty flowers.

If I thought about it then I would have said of course it must have some sort of flower/fertilising mechanism; but I had never given it any thought at all.  I had dismissed it totally as a plant group.  This then raised a question, what about the remnant of laurel I had back in the garden.  The generally ignored and occasionally sworn out unwelcome plant that (maybe I am over-egging this) I pretty much despised. 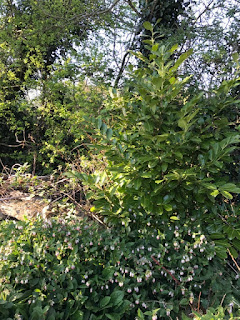 So I got home and wandered up to the top of the garden, the corner where I let things grow over the pile of stones that once housed an unwanted water feature. 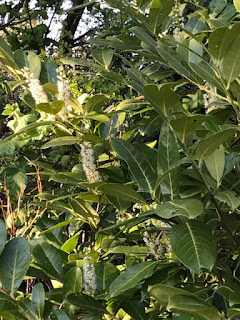 it is flowering!  Suddenly Mr Unwanted, Mr Unloved (don't ask me why its suddenly gendered as male, it just is.  Maybe its because of Laurel and Hardy, anything is possible.)

Anyhoo, not only is it now allowed to be, now it has a reason to stay and is welcome.  I admit my mistake and apologise to it with all sincerity.
Burghley House evergreen Laurel