March 19, 2017
A few weeks ago I attended the Garden Press Event.  This is where companies can show off their new products to garden writers and it is very much where they are hoping that things will catch your eye.  It is a bit like being a kid in a candy shop as there are many wonderful things to look at and talk about but one thing in particular caught my attention:  The Whitby Arch made by Forest.  I walked past it several times, I stroked it a few times and I could be heard to say "it will be mine, oh yes, one day it will be mine"*

As soon as I got home I measured up the space where my previous rose arch had occupied.  It had finally met its end after one storm too many this winter.  Measurements taken I then looked into where I might get the arch from.  I quickly found that Garden Site, who I have previously reviewed products for, sold the arch.  An email or two later and the deal was done.  I have to be transparent with you and say that I was given the arch to review, I did not buy it. 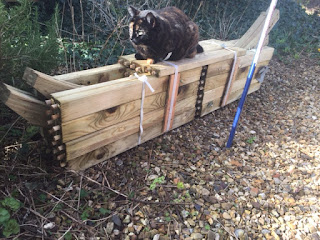 One reason that I like to work with Garden Site is that delivery from them is very easy.  They turn up when they say they are going to and left the arch where it was easy for me to move into the garden.  You will note that the arch quickly found Esme approval. 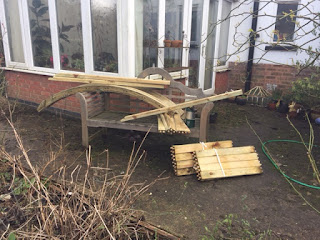 The arch was unpacked and moved to where I needed to start assembly.  The instructions are fairly minimal but they are sufficient.  One thing they state clearly is that this is at least a two person job and I can confirm that it really is. 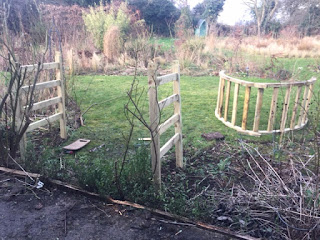 After a couple of hours I had reached this stage.  The instructions said place the sides in position and then sort out the top.  I had to enlist help when I got to this stage and we soon concluded that this method was not working well for us.  It was also definite, as suggested in the instructions, that this arch needed proper anchoring. So I wandered to off to find some ready-mix concrete and we agreed we would meet up again in a week to complete putting the arch up. 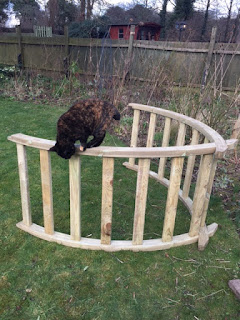 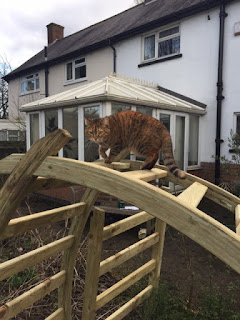 and Flossy thought it was worth checking as well.

A week passes, ready-mix concrete is purchased and I also bought some stronger bolts to hold it together.  The bolts supplied are probably fine, but I was not quite sure of them and I wanted this arch to be right.  I also took about six inches off the height as the instructions said this would help stabilise it.  I put the arch together as one piece and then it was really quite simple for the two of us to lift it into position. 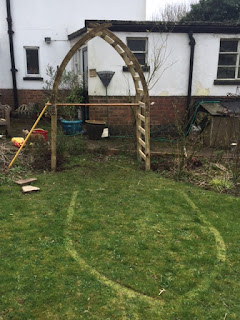 Ta da!  the arch was up!  I braced it with a rake and a hoe (garden tools are so useful), concreted it in and left it to set hard.

Another week passes, no it did not need a week to set, but as I work during the week and it is not properly daylight when I get home this time of year, gardening only happens at weekends. 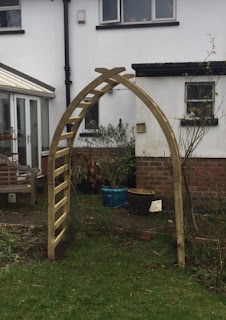 It looks as beautiful as it did at the show and it is completely stable. 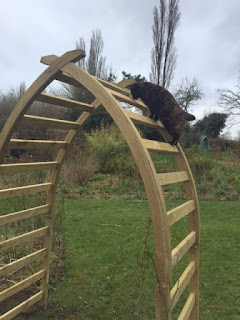 Esme says it is solid enough for any cat to make full use of. 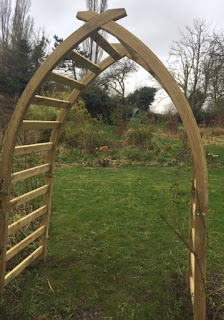 and it makes me happier than a garden arch should be able to.  I also like it that it is called the Whitby arch and that its shape is based on the whalebone arch at Whitby.  I am very fond of Whitby and I have stood by that arch many times.

When standing here looking at the garden through it to the Portmeirion bench at the top of the garden, I realised that this was a shape that I clearly have an affinity for.  It is now a repeated shape, which if I was a designer I would say was totally deliberate, whereas it is just serendipity at work again. 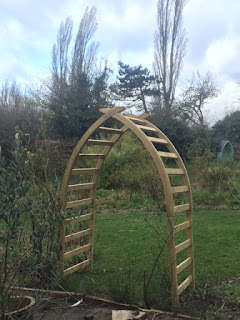 I am hugely grateful to the nice people at Garden Site for providing me with this arch.  I can genuinely recommend the arch and Garden Site's service.

The arch is made from pressure-treated timber to protect it from rot for fifteen years.

I am also hugely grateful to the Cynical Gardener for giving up her time on two weekends to help me put the arch up.  Her advice as always was extremely useful and any excuse to have a catch up and a chat is a good one.