December 11, 2016
Way back when the garden was first being developed, at the dawning of the creation of the pond there was also a small stream created that ran from the top of the garden along a natural line through the depression where the pond was dug and out the other side to the boundary.  As it was not a real stream it required electricity and a pump to make it work.  None of this was my plan as I worry about electricity in the garden (I'm daft enough to put a spade through the cable), so when circumstances changed one of the first acts I did was to remove said stream and fill it in.  As said above the stream did follow a natural line that ran across the garden. Who knows, maybe once there was water running through it.  It lent itself to something and I needed to consider what. 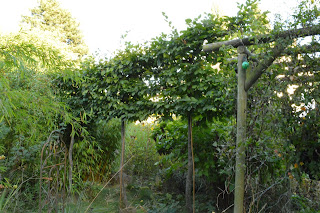 The lower part of this stream is now the line of the pleached hornbeams.  I could see them when I looked at the space, all I had to do was plant them and wait for them to reach the same stage that I could see.  They are now pretty much there.

For the other side of the stream I could also see in my mind's eye what I wanted.  I envisaged a row of copper beech pillars.  So five beech twigs (they were barely saplings) were purchased as, quite frankly, I could only afford to buy small.

The years go by and two of the twiglets very promptly die.  I replace them and they die again and so I decide that three is probably a good number anyway. 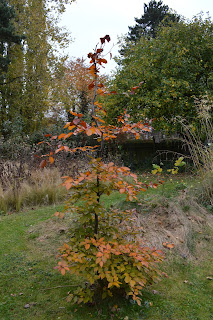 Eventually they have reached the stage where I now shape them.  The height I wanted has been reached and so I now clip the top. I also clip the branches when they go beyond the desired diameter.  This has encouraged them to bush out a bit and whilst they are not yet the pillars that I want they are definitely getting there. 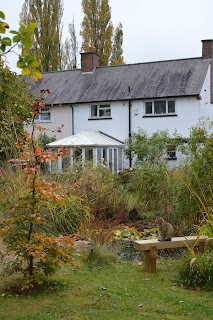 I like the look of them very much and after some thought (well actually very little thought), I decided that three did not look as balanced as I would like and that I had to try again and by another. 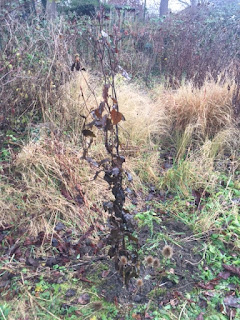 It might not look at the moment, but there it is, the fourth sentinel.  It is a bit larger than the ones I bought the first time so I am hoping it will catch up in a couple of years. 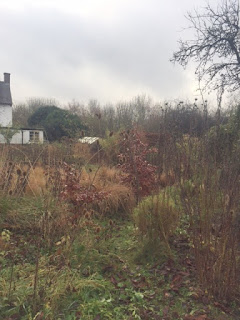 and whilst this picture is rather dark and grey as I planted the new tree on a dark grey day, I now have a sense of balance for my four sentinels and I look forward to watching them continue to reach their destiny.
copper beech Four sentinels