December 15, 2016
Its been a while since I last wrote one of the Blackberry Tales, maybe there are fewer things of wonder recently, maybe nothing has caught my eye.  But on this day, this particular day there it was, lying on the surface of the Woodland Border, a lump of solidified lava. 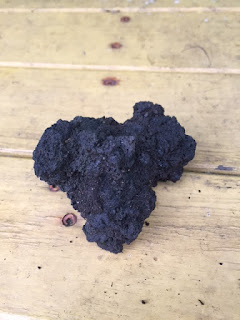 Pardon? I hear you say, exsqueeze me, baking powder?  Yes, you heard me: lava.  This is clear evidence that once more than a few years ago, this part of Leicester was the site of a volcano.  The founding volcano of the city, Mount Leicstos.  You may think you have heard little of this particular volcano, but I am afraid I can only shrug and lament inadequate education if this is so.

Please do not doubt that it is lava.  It is not some other dark stone/rock.  It is not coal, for if I had found a coal seam at the top of the garden I would have been pondering whether I could find Superman to compress it in his fist to make diamonds.  No, this is not coal, it is cold lava, the flow of which swept down from the mountains (presumably somewhere above Nottingham)  to create the Leicester plains.  I have a geography O'level so I am pretty sure of my knowledge base.

Well what else could it be?  It is too large to be some charcoal from a domestic fire and even if it was that why would it be at the top of the garden?  It could be left over maybe from a long gone bonfire, but it is not wood it is definitely rock and I am going to say igneous rock*