December 31, 2016
The year ends with as changeable weather as there has been all year.  We have been having rain, sun, frost and fog.  Quite a bit of fog in the last few days in fact and I am not hugely fond of fog, especially driving in fog.  This blog is not about driving though so let's move on. 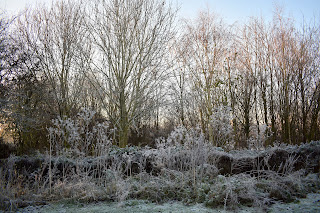 These pictures were taken fairly early on a frosty morning on the lead up to the end of the month.  This is the part of the driveway, it is its own special frost-pocket and always stays frozen for longer than the rest of the garden.  I really liked how the frost and light worked together at this moment.  I will have to cut down last year's growth at some point but for this moment in time it was worth leaving be. 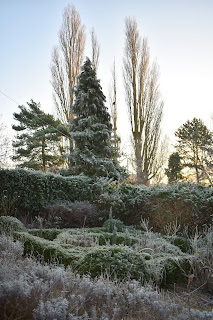 The Knot Garden responds well to frost.  It picks out the lines well and from this angle you cannot see all the frosty little weeds. 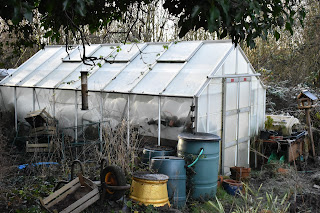 The greenhouse has been visited by the ghost of Miss Havisham who every year whirls around with fleecy blankets in order to protect from the sharpness of the cold. 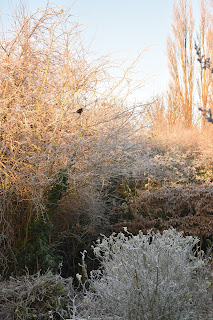 I was enjoying the light when I was taking these photographs.  The sun was still quite low in the sky so was not covering all the garden.  I spotted this blackbird in the hedge and liked how it looked. 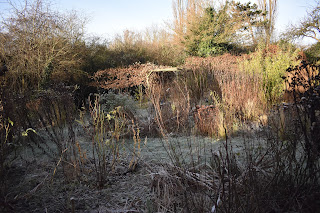 The sun highlighted the pleached hornbeams. But the lawns remained steadfastly frozen.  They had that solid feel underfoot that they get when frozen. 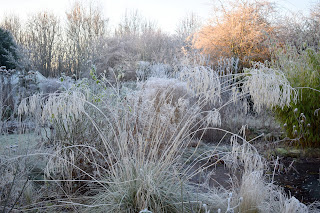 The grasses in the borders look good in the frost.  This was a sharp frost so it clung to the detail well. 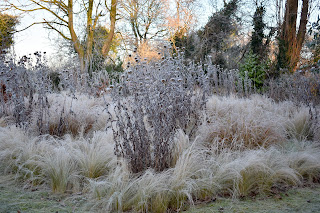 The Prairie Borders still look good in the winter.  After failing with adding cosmos this year I am still thinking of adding a small element of change this year.  Not sure what yet, but it will be only one type of plant and probably only one colour.  The Prairie Borders are my practice at control as it is here I place the most constraints on myself.  Not even poppies are allowed to grow in these borders. 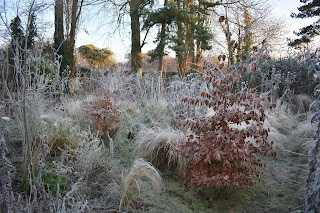 In between the Woodland Border and the Prairie Borders the Four Sentinels mark a boundary.  I am so glad I chose copper beech as the colour of the leaves lifts the otherwise monotone borders. 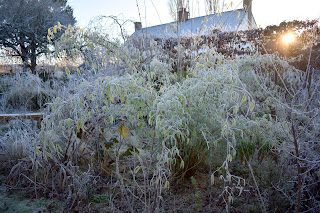 In the Exotic Border the Phyllostachys nigra is bowed but not broken.  This has been in the garden for around nine years and it has become a handsome plant. I do not mention it often enough I think, but I should.  It was one of those magazine offers and was a small plant when it arrived.  It must now reach a good eight feet in height but it has not spread or run.  It is a good plant. 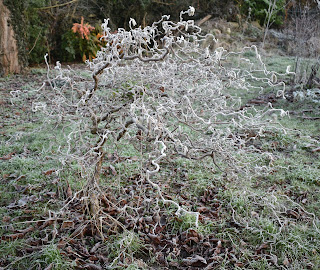 In the Wild Garden the contorted hazel loves the frost.  It shows it as its twisty turny best. 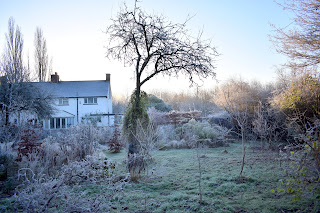 I am not sure there is a time when I do not love the Wild Garden, even in frost when it has been mowed and there seems to be little going on, it is one of my favourite parts of the garden. 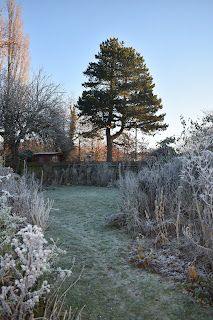 The Long Shoot also works well in frost, the frosted remains of the planting still give height and structure.

and as I follow it around to the Burtonesque Curve I still like how this movement of lawn works.  I am however getting twitchy fingers to have a new project in the garden.  I am not sure what, but the wind is in the east (metaphorically speaking) coupled with 2017 being the tenth year of this garden means that I predict that there will be change. 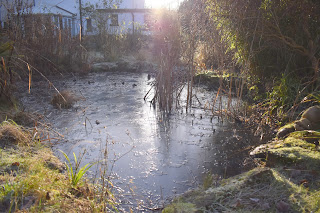 The pond will always remain no matter what the change, I am sure of that.  It is now at it's cold frozen state but in not that many weeks frogspawn will appear.  The pond is the centre of the garden and the heart of the garden.

Thanks to Helen for hosting this meme.

Thanks to all my readers for reading and can I take this moment to pause and wish you all a very happy new year.  Whatever changes and challenges 2017 will inevitably bring, I hope that it serves you well.