December 26, 2016
In truth, Storm Barbara was not that stormy when she arrived in the mild Midlands. She had done her worst before she reached us and so it was fairly blowy and very rainy but not as dangerous or intense as other areas had experienced.  On saying this, for one elderly member of the garden it was traumatic. 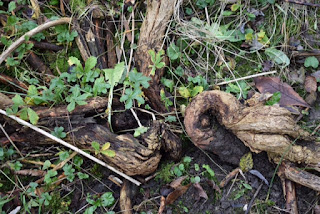 The Tree Lupin has been in my garden for quite a while, I think at least eight of the ten years I have lived here, I could even check my records and not be surprised if it was nine.  It has formed the centre piece of the Tree Lupin Border for all these years and has flowered and given me the most amazing scent for all this time.  Yet as you can see above (ignore the weeds, it is a great plant for hiding weeds at its base), the recent stormy weather has split it asunder (isn't asunder a wonderful word, got to be one of my favourites). 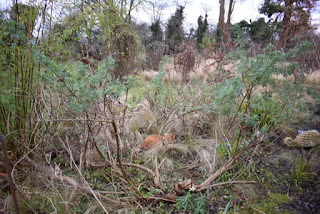 I saw this upsetting sight as I had a wander around the garden on Christmas Day.  I waggled one of the heavy limbs and realised it was split at its heart and not going to mend itself again.  I stood in front of it momentarily pondering whether if I tied it together that would help?  But no, I could see that age was really the issue, the tree lupin is in need of drastic action.

The pruning saw was fetched and I cut away the wobbly bits. 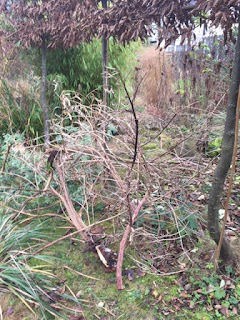 There were quite a lot of wobbly bits.  The tree lupin must have been about five feet tall and at least eight feet across.  It is a wonderfully sprawly plant that allows other plants to grow through it. 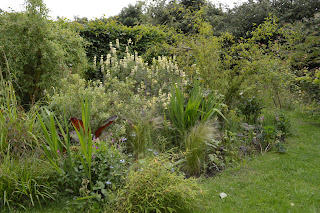 This is how it looked in June, flowering away like a good'un. 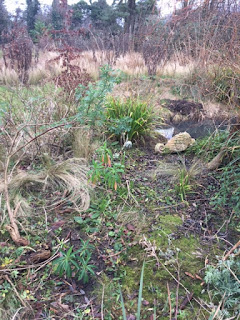 After surgery it is now much smaller and this huge space has opened up.  You can see the recently re-sited dolphin, that is likely to move again, I am moving it around a bit at the moment until I am happy with it.  The tree lupin will either live and rejuvenate or it will die.  If it lives that is really good, if it dies it is a great new opportunity.

But all is not lost even if it does die.  As I was removing the dead bits there were many seed pods still on the plant.  Some seeds I put in my pocket to sow in the greenhouse and some I popped into the soil to see if they would germinate better outside and then.... 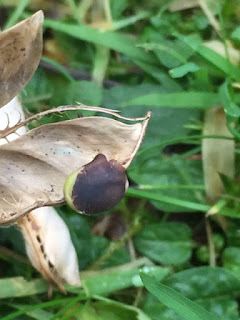 .... I found this one, already starting to germinate.  A peep of green and a small root just forcing it's way out of the seed case.  This one I popped onto the surface of a plant pot with fresh compost in it.  I pressed it carefully so that the root touches the compost surface and and I hopeful it will continue to grow.  It is a new hope.
Storm Barbara Tree Lupin