November 30, 2016
November has been mild and cold and has also seen the start of the rainy season.  Lots of rain in has fallen this month, mainly in a two day period and the garden feels more soaked than it has done for many months.  We have had a couple of frosts, but generally it has not really been that cold.

So to the garden: 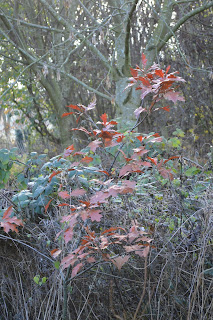 Well, the driveway actually, where the Pin Oak has turned a beautiful russet red.  This is such a fine tree and I am so pleased I planted it in the driveway as it makes quite a statement.  It is still young but it has settled in very well.  I am hoping it will still start to mature and put on more growth next year. 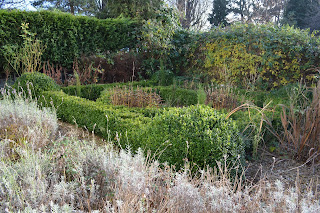 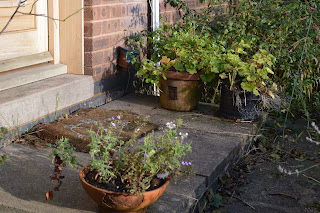 On the front doorstep there are still some pelagoniums resisting the cold as is the Bowl of Happiness. 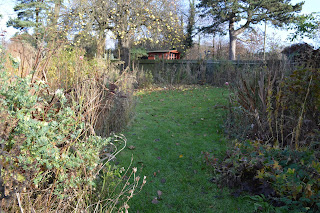 Into the main garden itself and it is one of those days where the sun is bright but the shadows are long.  The Long Shoot is looking a bit dark with a sprinkle of windfall apples on the ground.  The birds and squirrels are enjoying eating them. 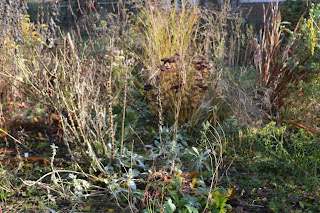 In the Pond Border itself the planting is looking exhausted and cold.  It is the time of year when the sedums start to come into their own and I love the structure that they bring to the winter garden. 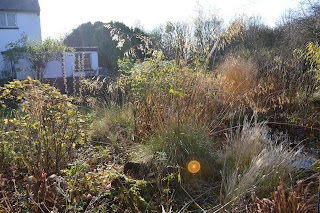 The grasses by the pond are also providing good structure and work well with the quality of the light this time of year. 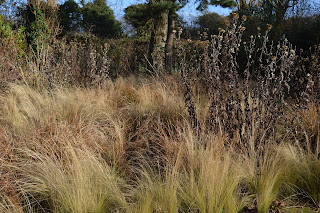 The Prairie Borders also shine in the sun.  They have done well this year despite the near total failure of planting cosmos into them for a change.  I have planted some tulips into them to give a bit of Spring colour.  This might be a failure too though as I think the squirrels have feasted on them. 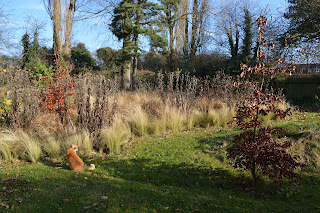 I like this view across the Dancing Lawn towards the Prairie Borders.  It also shows the beech pillars that are not quite pillars yet and of course, Bruce. 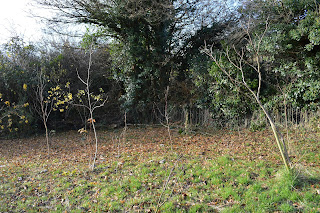 The Wild Garden looks sparse this time of year.  The trees are still rather young but they are maturing well now. 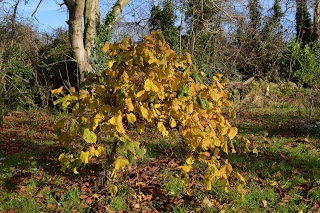 The contorted hazel is looking very fine with its autumn leaf colour. 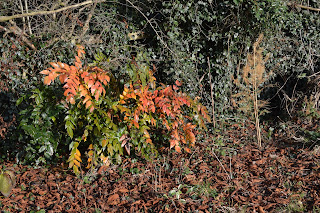 and the mahonia at the top of the garden is also doing well.  It has been joined by a Japanese larch which I am hoping will settle in well.  I know it will make a big tree but I think there is capacity for it at the top boundary. 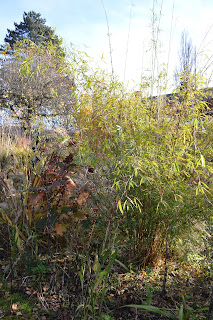 The Exotic Border has some bare patches but the bamboo and the oak-leafed hydrangea give it good structure through the winter. 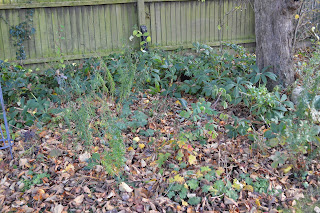 The Spring Border is sleeping under a carpet of apple leaves for now. 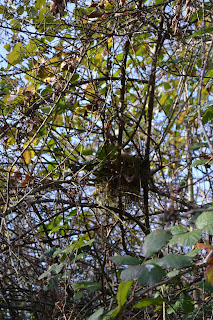 and the leaf-fall exposes some nests in the boundary hedges.  Not sure what this is the nest of, but it is well made and I am hope that next year it might be used again. 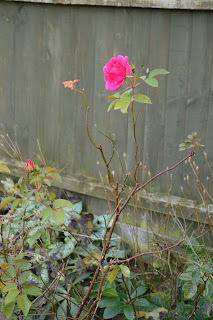 There are still some roses in bloom - this is Sir Clough. 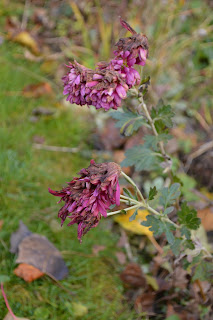 But some of the chrysanthemums have seen better days. 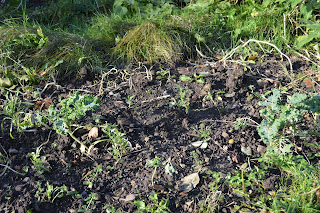 In the veg borders the slugs have eaten pretty much everything except the kale.  Not sure that is a good sign for the taste of the kale. 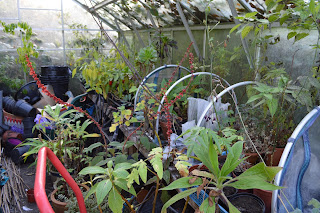 The greenhouse is full and waiting to be fleeced when the temperature takes a further fall. 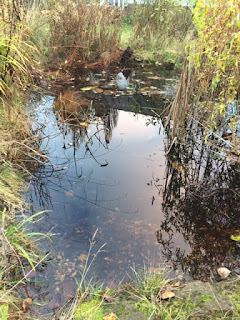 and the pond is pretty much full.  The heavy rain the other day topped it up nicely.

I am still weeding the garden as often as I can, the lack of serious frost means that the weeds are still growing.  I tell myself every weed removed now is worth 100 in the new year.  Let's hope this is so.

Thanks as ever to Helen for hosting this meme.
End of month review End of month view EoMR Japanese larch Rose Sir Clough