A pitstop at Hidcote

November 10, 2016
How does one start to write about Hidcote?  The issue is it has all probably already been said.  Is this going to stop me?  Of course not. I have visited Hidcote twice previously, firstly probably 15 years ago and then again about eight years ago.  The last time I visited I left a little underwhelmed.  I cannot quite explain this, but the garden did not have the magic I had felt on my first visit.  It seemed a little tired in places and a little almost unloved.  Most recently when I have been in that vicinity I prioritised visiting Kiftsgate, its very near neighbour, a garden I always enjoy visiting and has a real feeling of soul about it.

Yet on saying this, not visiting Hidcote was nagging at me.  I knew that the National Trust had been restoring it to be more like it was in its heyday and I was intrigued to see what this would mean in reality.  I recently had reason to be driving close by so I thought it was time for a revisit.  I'm pleased I did.  I was lucky in that it was fairly late afternoon and whilst still in the school holidays it was not too crowded. 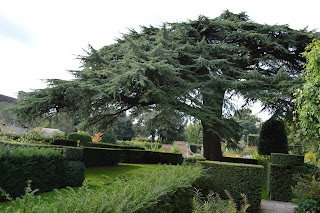 As you enter the gardens one of the first things you see is this magnificent Cedar of Lebanon.  I smiled in recognition of it from my previous visits.  It is a wonderful tree perfectly sitting in its environs. 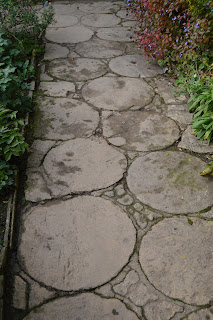 I walked along the paths and pondered the circular stones.  I had a bit of a Portmeirion moment.  There are oval slate paving stones at Portmeirion that look very decorative and are the by-product of making slate toilet seats (yes they are the bit taken out to make the hole); so I mused as I looked at these circles if they had a story. 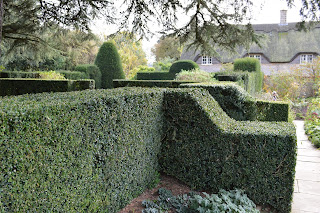 Hidcote is famously described as a series of rooms, so there is lots of very precisely cut hedging. 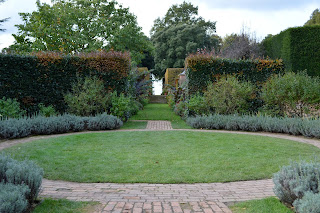 Circles are a recurring theme.... 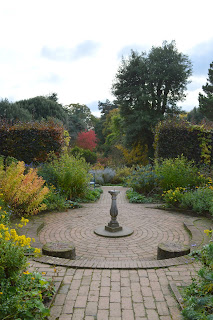 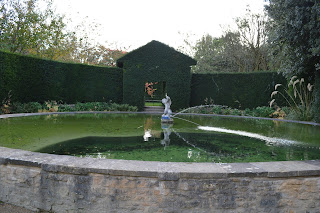 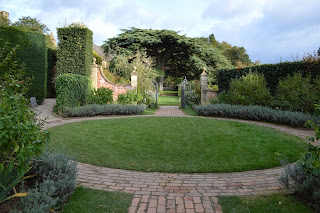 This repetition gives a rhythm to the design that is pleasing. 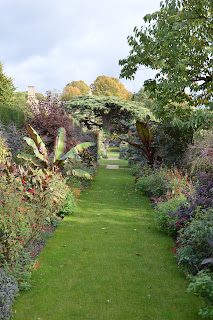 The hot borders looked good, but you could not walk up to them when I was there.  With the heavy footfall this area must get it is no surprise that they have to try and protect it when they can. 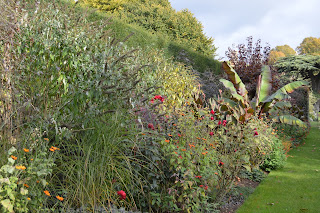 The sun shone just right at this moment, it makes all the difference when looking at a red border.

Like I said, I have been to Hidcote before but never by myself and this gave me a freedom to wander without having to consider anyone else.  There is something freeing about solitary garden visiting and whilst I love visiting gardens with others, there is something rather special about being left to your own thoughts as you wander around.  I knew I had never been in the wilderness part of the garden in my other visits; this had to rectified. 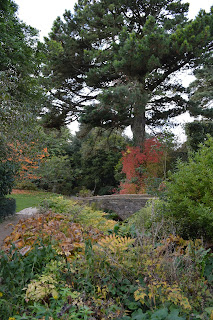 I really liked the Wilderness.  It has a wonderful charm about it but what I noticed most was the scents.  I shall explain, as I wandered around the main garden there was that distinct scent of damp autumn.  You know the one, its a bit sluggy. As I moved into the Wilderness there was the sudden scent of candyfloss. I suspected there was a Cercidiphyllum near by, but I could not see it.  I pondered about being led around the garden by the nose, going from scent to scent and how this would change with the seasons. 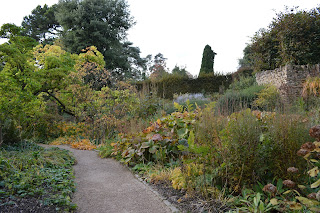 I loved the colours in this part of the garden and how it felt relaxed.  It has a lack of wow that was a joy to find.  Much of Hidcote is about formality and this lack of formality that bleeds away as you move further into the wilderness is a welcome relief. 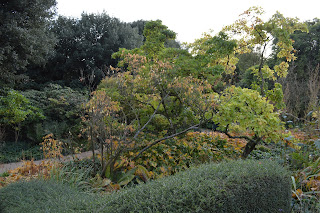 I spent a lot of time in this area. 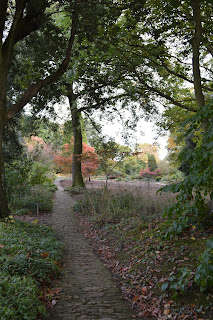 The paths wind you around the garden. 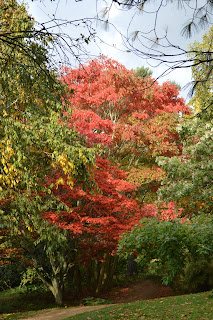 Some of the colours just stop you in your tracks.  Well they did me.

I was also stopped in my tracks by the Poppy Garden.  Really? I hear you say, yes it was so. 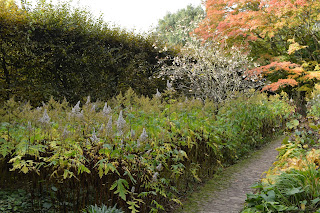 This garden is a stream of Macleaya microcarpa, the Plume Poppy.  It is probably past its best this time of year but imagine it in full flower.  I really liked this use of this plant, which I know can be a bit of a thug.  It is a brave person that plants it en-masse, but here there is space for it and it looks really good.  I pondered whether I could do something similar, I might have the germ of any idea.

I then found myself alongside the Rock Bank, 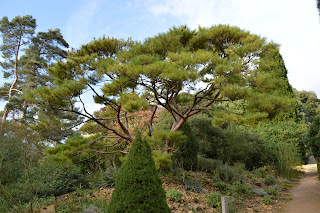 I got a bit excited by the Rock Bank. 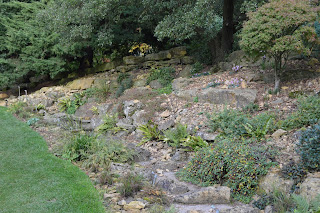 I could see how Major Johnson had created these different areas to host his collections of plants. 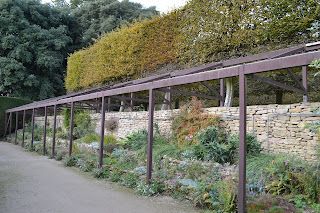 I liked this hot spot for dry plants further up the garden as well.  It felt like a moment of 'this is a hot wall, I think it will work well for my spiky collection' moment.  A moment most gardeners will recognise, the right spot for that plant so there it has to be. 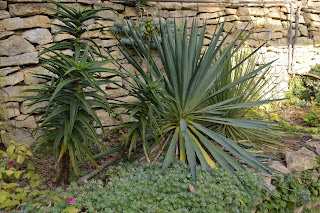 As I'm having a bit of a spiky moment I did stand here in awe for a while. 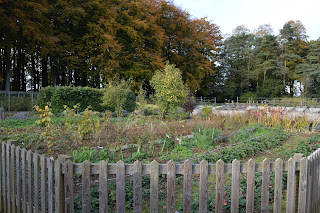 I also went into the Kitchen Garden, I have no memory of being in this area before so I assume I had missed it previously.  It was very ordered, very pretty and you could buy the produce.  There was an honesty box (I love an honesty box). 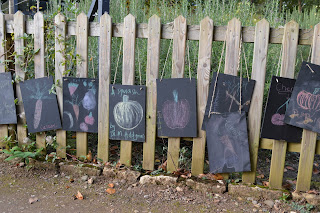 The area was clearly used a lot for school trips and encouraging children to learn about food growing.  I found these slates charming, there is no other word to use, charming. 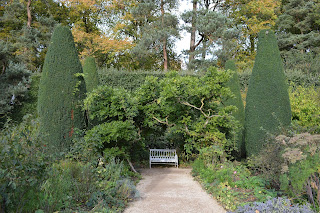 Around from the kitchen garden is probably the best framed seat you will ever see.  It could only have been more perfect if the wisteria had been in flower. 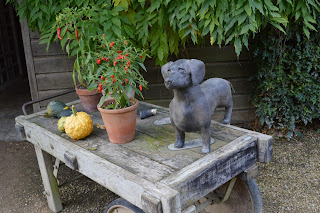 I liked the small touches like this cart.  If you look carefully you can see that one of the backlegs has fallen off the dog and rolled to one side.  I felt sorry for the dog. 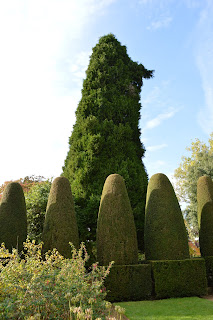