October 20, 2016
The Exotic Border has been through more iterations than any other border in the garden.  It has in truth lacked direction and yet there has been a slim thread of consistency running through it year on year.

The border was firstly the Dahlia Border.  I mused about it as being a riot of colour.  It never quite got there in reality. it was less of a riot more of a mild disturbance.  Some years it did better than others, but generally it was always short of the mark.  The border is perfect for growing dahlias as it is probably the sunniest and best drained area of my clay garden. This border, unlike most in my garden, does not contain any roses.  Every now and again I get tempted to just pop one in, but so far my discipline has been good.

Some years pass and the tree lupin takes up residence.  The border is now rightly renamed in its honour as it is a fantastic plant.  Then there followed a large Phyllostachys nigra which has grown really well.  Every year I planted dahlias into it and it has bumbled along fairly happily.

Last year I went to Great Dixter for a course on exotic planting.  This made a huge impression on me as did other visits at that weekend and in particular my visit to Ulting Wick which gave me huge food for thought. 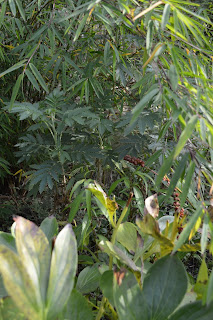 So I began planting with more of a purpose.  I added a Melianthus major, a gift from a friend.  Also a callistemon found its way into the border.  I wanted to put in some structure that would look a bit exotic. The view from this angle shows the tithonia that are a great favourite of mine.  There is the Twinings dahlia in the foreground that is never lifted but comes back year on the year.  There is also the blue of the Salvia atrocyanea shining its blue wonderfulness. 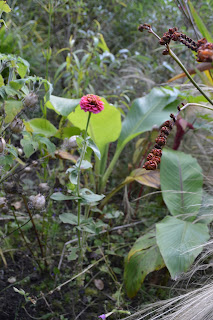 Some bananas also were added and some vietnamese coriander.  This coriander has really nice foliage and I thought it would add something a little different. 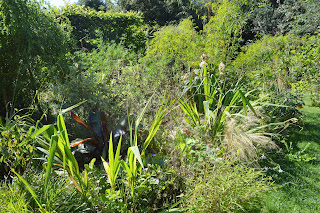 The foliage and grasses have worked quite well  I think. 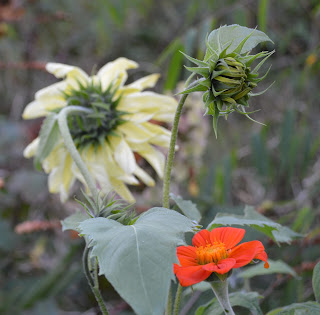 There are also some sunflowers that have added some more height and contrast to the tithonia.

Am I happy with it?  Almost, it has not been too bad for a first year.  It is, in truth, just short of the mark.  Will it better next year?  I hope so!

I've enjoyed appraising this border so I think the others in the garden might be due a consideration as well.  I shall return to this theme soon.
Exotic Border exotic planting Great Dixter Ulting Wick