October 18, 2016
I was contacted recently to ask if I would like to trial some Wilkinson Sword garden tools.  I had a look around their website and the first product I chose was the  Razorcut Comfort Medium Bypass Pruners.  I do like a good pair of secateurs and this offer to trial just as my trusty secateurs were on their last legs.  I had had them for a good ten years so I think they had lasted me well but I was in that limbo of not knowing whether to replace with the same or try something new.  Whilst I was in this undecided state I purchased a pair from a local garden centre for £3.99.  I told myself if they lasted me a couple of months whilst I came to a decision that would be fine.  Dear reader, they did not last a week. 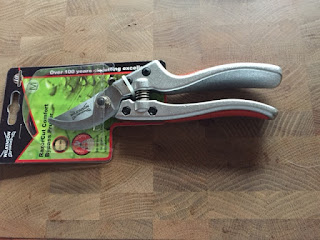 The Wilkinson secateurs duly arrived.  My first impression was that they were very comfortable to hold; they fit well into the hand. 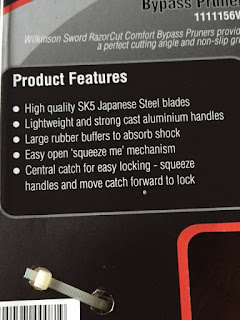 The packaging says that they have high quality Japanese steel blades.  They certainly are very sharp.  Compared to my old secateurs that have become blunted with age and poor sharpening skills on my part, they cut through stems with complete ease.  I might have got a bit snip-happy with them when I first took them out for a spin,

The easy open 'squeeze me' mechanism works very well.  You just squeeze the handles slightly together and the secateurs pop open ready to use in your hand.  To lock the secateurs though is a little more fiddly.  I think this is partly because at first I could not train my brain to lock them in a different way to my old pair.  It is a different action and so I had to learn not to do what my hands just automatically wanted to do.  I can just about do it with one hand now but quite often it takes me both hands to lock them.  The lock works well though and that matters.  A pair of secateurs popping open when you don't want them too is both annoying and a risk. I have been using the secateurs now for a couple of weeks and it is pruning/cutting back time of year.  One of the first jobs I used them for was the pruning of this rose 'Maidens Blush', that sits in front of my kitchen window.  It had grown to over six feet tall this year and so it was in need of some reduction and thinning out.  As I prune I could hear the words of Monty Don talking about pigeons flying through things.  That was not about rose pruning but you get the idea. 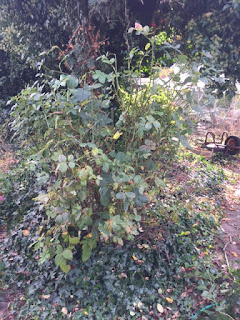 The secateurs made light work of this.  Some of the stems are quite thick, more than a centimeter in diameter, as it is a well established rose but I did not need to resort to loppers to cut through them.  I was very impressed.

The secateurs have now become my primary pair.  I am very pleased with them and I can happily recommend them.
Comfort Medium Bypass Pruner product review Wilkinson Sword