October 10, 2016
Dear reader at certain times of the year I manage to give myself a slightly strained back.  One of the worst times I do this is at this time of year when the nights get longer and colder and my tender plants need to come indoors.  Last year I decided that I was not going to hurt my back again lugging around heavy pots, I was going to buy a trolley. Trolley duly purchased I then hit another problem, namely the step into the conservatory.  The trolley could not climb the step; which  was fine except for the biggest, heaviest pot that holds the brugmansia.  One wrenched back later and the brugmansia was indoors safely for the winter.

I decided for the second time that I would not do the same again.  I made a plan of two parts.

Part 1 - buy some large plastic pots to move the brugmansia into so that I did not need to lug around the big ceramic pot that in itself weight gawd knows how much.

Part 2 - buy a trolley that could negotiate steps.  It took a bit of hunting around but then I found the Tri-Truk trolley on the Thompson and Morgan website.  Now some of you will know that I trial plants for Thompson and Morgan and therefore receive them at a discounted price.  This trolley is not made by T&M (other vendors also sell it) and so I paid the full price.  I am telling you this so that you know that I am not going to look kindly on wasting my money.

The trolley arrived earlier this year and sat in its box waiting for me to get around to putting it together.  A rainy afternoon happened and so I decide it was the day to assemble it.  It was quite easy to do, a set of spanners and a a monkey wrench were all the tools I used. 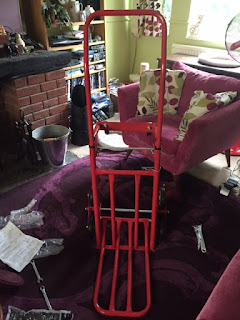 This truk is rather clever; not only can it climb steps but it also converts from a trolley to a sort of truck. 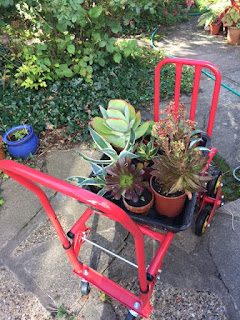 It has worked well on negotiating steps but it is not so successful if there is a bit of a lip on the step.  There is a lip to the door of my conservatory and the three-wheel mechanism was not very keen to easily mount it.  I decided that rather than pull trolley hard over the step I would lift the plant in.  This was ok as it was in a plastic pot and I achieved all this with no injury to myself.  This is very good.  The steps up and down to the greenhouse it managed with ease.

I will give you a couple of notes of caution.  Firstly, it steers like a trolley, in other words, its not great at going around sharp corners.  It is ok, shopping trolleys are worse, but it does need a bit of hand.

Secondly, the drop down bit to be the trolley base has nothing to hold it in the upright position.  This is a bit of a flaw as when you store it if you do not face this bit to the wall it can suddenly drop down.  It only needs to do this once for you to realise to store it facing the wall, but it is still a shame as a simple catch would solve this.

So, do I like the trolley?  The answer is yes it seems to have done the trick. Not only did I load the conservatory and greenhouse in record time, but it was also a pain-free operation.
product review Thomspon and Morgan Tri Truk trolley