September 26, 2016
Just in front of my house is a small border, probably around 3 feet deep and 5 foot long.  It is quite a warm border but it suffers from the dry margin that the house creates.  When I first moved into the house it was dominated by a large lilac, a red rose and a ceanothus.  Now I like a good ceanothus but this one was too large and was blocking out light from the window.  I gave it a drastic prune and it responded by drastically dying.  This was no great loss and I resolved to replace it elsewhere in the garden, nine years later I still haven't got around to this.

I have planted odd bits in this border, some to better effect than others.  There is now a climbing Gertrude Jekyll rose by the door which is a pure delight.  I also planted a white japanese anemone that winds its flowers through the red rose and works very well.  A couple of years ago I planted some fuchsias and hellebores in the border and they have also worked well.  Finally there is a myrtle by the front door.  This is important, if you plant a myrtle by the front door it means you will always return home safely (apparently/allegedly). 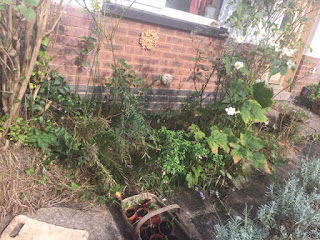 The border though suffers dreadfully from couch grass.  No matter how much I weed, and I do often, it romps around.  It has smothered various other attempts at planting and so I decided enough was enough.  Yes, dear reader, I glyphosated it.  What what you say!  This is not a good thing to do, well no it isn't but needs must when the devil drives.  It is not near any food growing and, quite frankly, for me it was the best solution (no pun intended) (well, maybe a little).

A few weeks ago I also took some divisions of various plants in the back garden.  I had determined that this revamp of the front garden would not cost me any money.  I potted up the divisions and lo and behold they sprouted quite well. 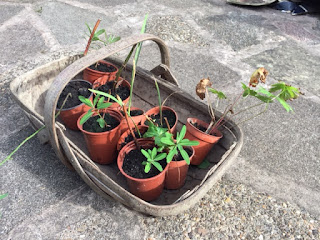 There are some astrantias, euphorbias and some hesperanta.

It was time to clear the detritus from border and replant. 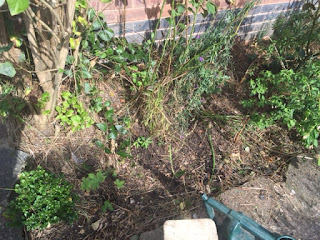 I can tell you are peering at the photograph. I admit it does not look much better yet...... 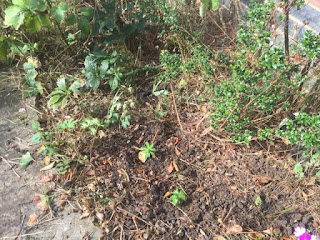 .....but I have faith that it will.  Whilst I vaguely think that revamping ought to involve vampires, in reality I think I have given this border some bones from which I can now build on.