September 22, 2016
I was invited to go along to the recent Kelmarsh Hall Dahlia Festival that took place over two Sundays in September. Kelmarsh is about thirty minutes from where I live and very easily accessible from the A14/A508.  I last visited there around ten years ago and knew I was due a return visit. 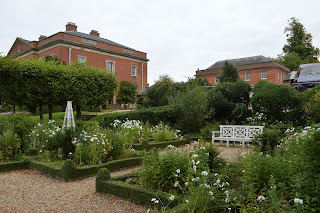 The gardens are mainly the product of Nancy Lancaster's vision and her work with Norah Lyndsay and Geoffrey Jellicoe.  These three people shaped the garden as it looks today and the trust that now owns the house and gardens aims to continue these gardens as they would have. 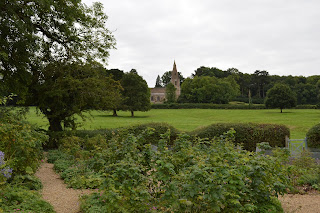 Nancy Lancaster is reknown for leading the 'English Country House' look, she liked her gardens to be soft, billowing and nostalgically romantic.  The above photo is of the Fan Garden, that allegedly Norah Lyndsay marked out with a wave of her parasol.  It is full of old English roses.  The field beyond hides a buried medieval village.  Nancy had this view cleared of some farm buildings that she  felt spoiled the view to the church.  Local tales also hinted that she might have wanted to move the church too, but that did not come to be. 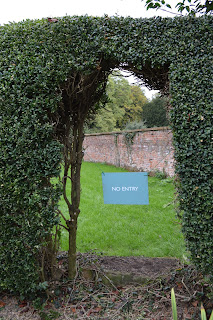 Close by the Fan Garden is this intriguing arch in the hedge.  They have recently found some steps leading down into a small enclosed area which they believe was the site of a scented garden.  They are going to try and recreate the idea in this space, which is all rather exciting.  Unlike some country house gardens, they have few records of plant lists.  Nancy did leave a journal that does record some of the plants she used and this is used for reference often, but they do not have detailed plans.  The main pictorial record they have are black and white Country Life photographs.  Useful in some ways but it does mean guess the colour. 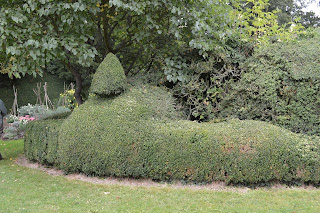 As you walk around the gardens there is topiary and hedging everywhere.  It has 'good bones'. 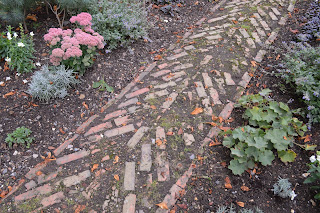 There are also some wonderful herringbone paths, 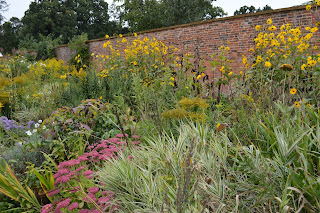 and a very yellow long border.  This border was fantastic, I love yellow in the garden and I thought this was a joy. 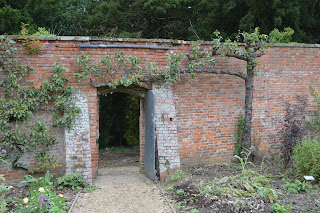 The dahlias are grown in the Walled Garden.  It is a huge space, full of colour.  The Dahlia Festival was made up of various events including a tour by the Head Gardener Josh Coyne, a talk on the Dahlias at Kelmarsh by the garden consultant Michele Hickman.  Michele also gave a dahlia clinic in the afternoon and there were flower arranging demonstrations from Emma Wright. 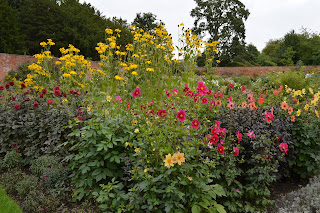 The Walled Garden is split into sections with the dahlias dominating probably about one half of the very large space. Michele explained that dahlias first were grown at Kelmarsh by a previous head gardener who used them for cut flowers in the house.  This meant they built up quite a collection which was then added to by the author Andy Vernon who donated some of his collection. 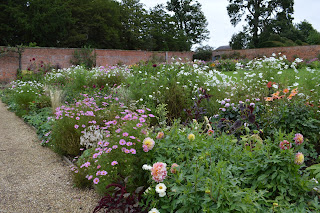 Now there are many, lots, loads of them. 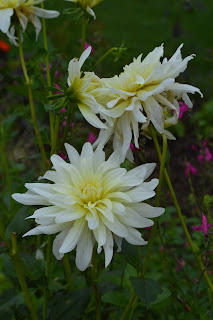 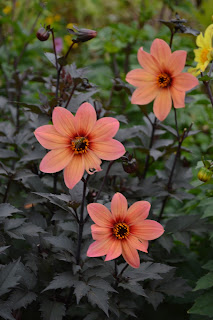 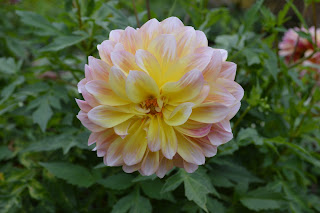 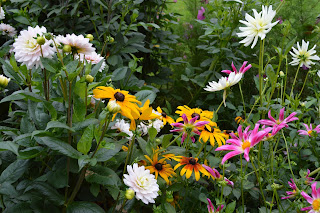 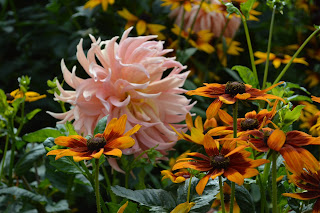 Almost every colour shape and size you can think of is there, all mixed in well with perennial planting.  Michele gave us tips on how to keep them alive over the winter, but observed that whether you lift them all or leave them in and mulch them there is no perfect way of guaranteeing survival.  This was very reassuring for me as I always lose a couple. 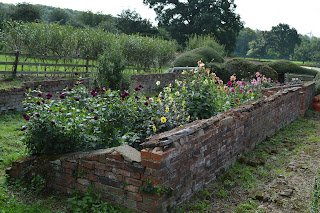 There were even some hiding in this little out of the way area. 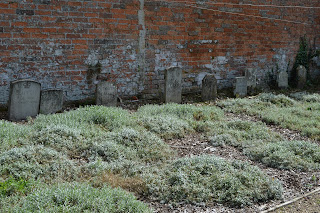 I thought it quite unusual to see a dogs' graveyard in the walled garden.  I have seen many such dog headstones but never in a walled garden before. 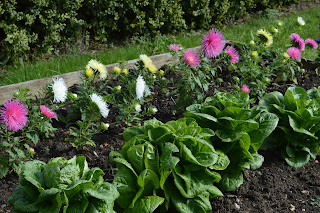 I liked the lettuce and annual aster section very much. 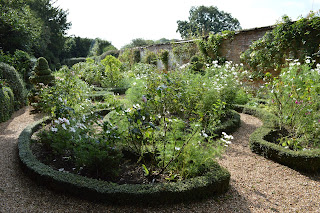 Outside of the walled garden is this wonderful scent garden.  There are roses and scented pelagoniums and the scent is amazing. 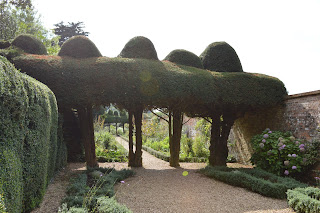 I love these yew hedges with their skirts lifted.  I remembered them from my previous visit and I think they are a great feature. 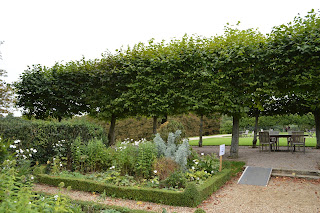 To the front of the house are these rows of pleached trees.  I remembered standing looking at these for ages last time I was here and they are, very truly, the direct inspiration for my pleached hornbeams.  It was after studying these ones closely I decided I would give it a go.

and this cheeky robin was fluttering around the tables near the tea/coffee/cake sales.  Clever robin.

Kelmarsh is a great garden that is currently in the process of being revamped.  I am hopeful they will not mind me saying, but you can see that there is work in progress in the borders.  It is a real challenge to revamp a garden that is open to the public and I actually quite like seeing a garden that is not completely perfect.  It makes it feel more real.

I loved Kelmarsh, I remembered how much I loved it last time I visited, I berated myself for not visiting sooner and I will not wait another ten years before returning. Next year's Dahlia Festival might be a must-do visit.
Dahlia Festival Geoffrey Jellicoe Kelmarsh Hall Michele Hickman Nancy Lancaster Norah Lyndsay