September 01, 2016
August has been quite warm, indeed rather hot.  Just when I was beginning to worry that we had not had rain for a while it then rained rather a lot.  This makes it a good month for the garden. 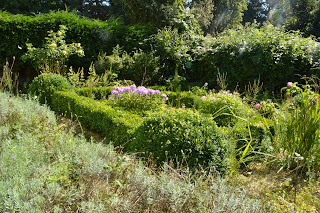 In the front garden the Knot Garden is looking ok.  It needs some work but I am reasonably happy with it.  The five small cypress trees I planted in it last year are putting on growth quite well now and this makes me happy. 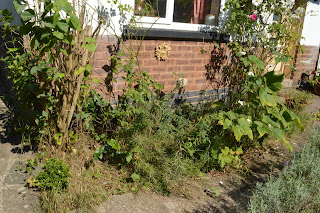 This does not make me happy.  This is the border by the house and it is over-run with couch-grass.  I have struggled to make this border work so it is going to get cleared and replanted.  I have divided various plants from the back garden and I currently have various potted up bits hopefully taking in the greenhouse. They will be planted out before the frost descend so they can settle in before Spring. 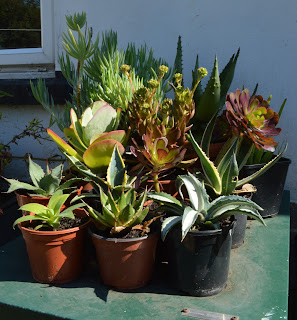 The sharpies are still sitting on top of the boiler.  Some I have bought, some are from cuttings and one is from seed.  It is not a big collection but it makes me happy. 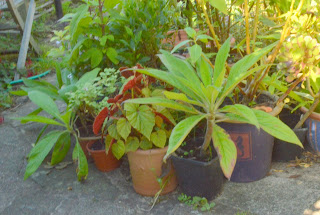 Also making me happy are my echiums.  The big one I bought and the smaller one I have grown from seed.  I have about eight in total from seed.  I desperately want to get them through the winter and hopefully to flower.  I have grown them before and successfully overwintered them, getting them to flower however is another matter. 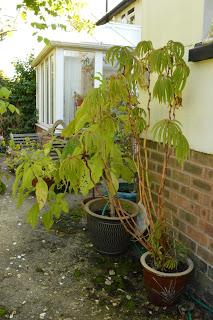 Around the side of the house is the Begonia luxurians and the Brugmansia.  They have grown well this year.  The Brugmansia has been flowering since around February.  It looks like it is pausing but it has more buds on it ready to flower again. 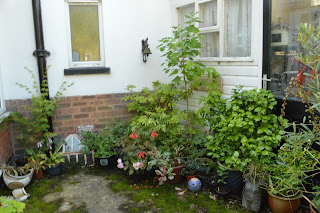 The Courtyard is working well now.  It has taken me some time to make this space work but now I think it is good.  All the plants are in containers and whilst it is very shady for most of the day, the plants are thriving.  It is also a good nursery space, I have various shrubs in pots that are not big enough to go out in the main garden yet.  They seem to like waiting in the wings. 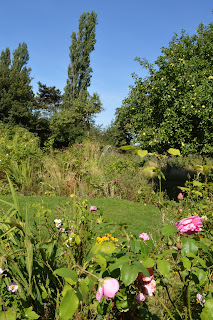 The view across the Conservatory Border is looking good.  The rose in the foreground is Portmeirion and as the sun hits it, it smells of hot roses.  It is rather wonderful. 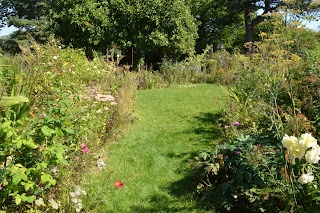 The Long Shoot is also still quite colourful.  The red of the hesperantha can be seen.  I bought one of these plants a few years ago and I have divided it often.  It now repeats around the borders rather well. 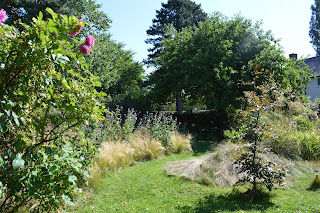 This is the view from the Dancing Lawn with the Prairie Borders to the left and the grassy knoll to the right. 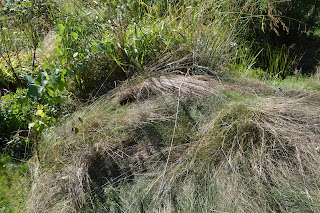 The hole you can just about see near the top of the grassy knoll is home to a wasp nest, well I think it is wasps, I am not getting that close to find out.  I would usually have cut the grass on the knoll but for obvious reasons that is not happening at the moment.  I am surprising myself that I am living with this nest quite easily.  I am very (very) scared of wasps.  At the moment they are not troubling me so I am not troubling them.  It is a deal that works well. 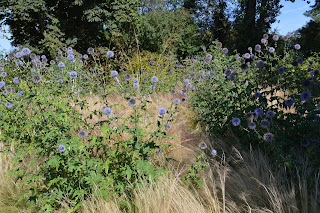 The Prairie Borders are at their blonde best.  The cosmos I planted into them to add a change have not really made the impact I would have liked.  The slugs won that round. 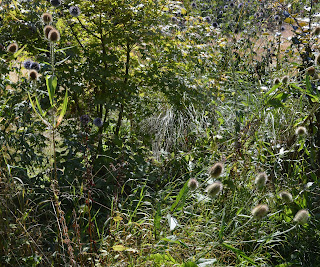 The teasel patch is much reduced this year.  One thing I like about the teasel patch, other than the teasels, is that it is never the same two years running.  It is completely self seeded so it is totally at the whim of nature. 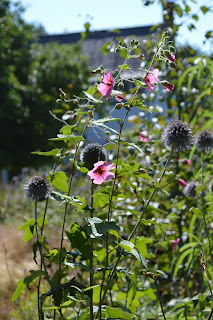 The Woodland Border is looking quite colourful.  This Anisodentea 'El Royo' flowers pretty much every month of the year.  It is a fantastic plant. 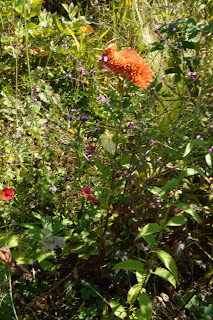 In the Conservatory Border the chrysanthemums are starting to flower.  I love this copper one. 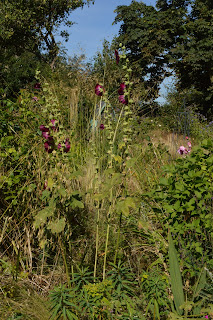 Whilst in the Pond Border the Hollyhocks are performing brilliantly.  I have grown some more from seed so I expect next year to hopefully be quite show.  I am very enamoured of hollyhocks. 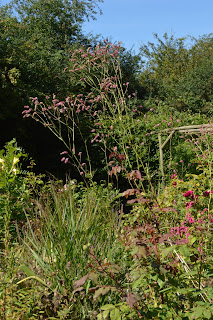 The sanguisorba Pink Tanna is also stealing the show.  It was not this big last year but now it has clearly settled in.  Not only is it structurally brilliant, the bees love it. 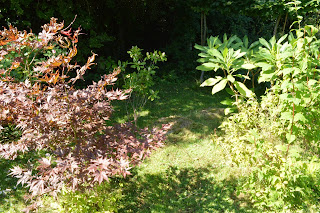 The Four Sisters are doing ok.  The Carol Klein Acer has been quite wind-burned in recent weeks..... 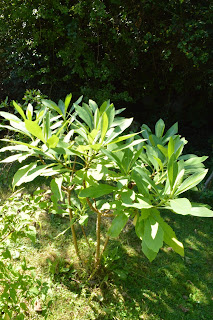 .... but look at the Edgeworthia, it is fantastically healthy.  It is maturing really well, I am very very pleased with it. 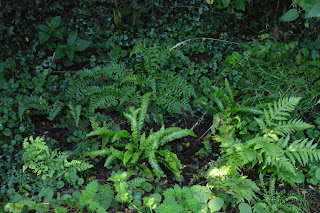 The fernery, whilst admittedly a little weedy, is also coming on well. 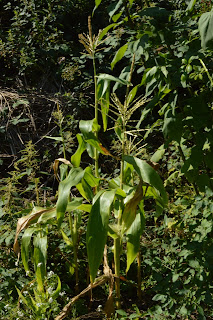 In the veg borders there is sweetcorn (ignore the nettles)...... 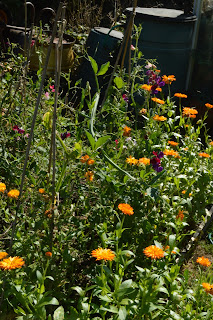 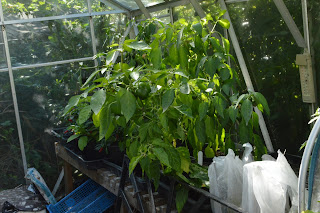 The greenhouse is home to chillies and various cuttings. 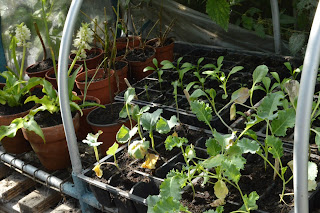 Plus wallflower seedlings, the divisions for the front garden, some autumn veg plug plants being grown on and some rather nice white eucomis that will feature in a future blog. 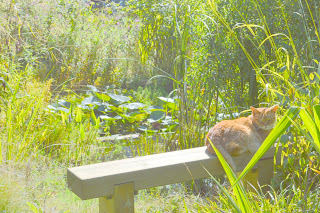 I end on the pond as is traditional.  Yes it is a bit of a bleached out photo but I liked it anyway.  The pond has finally cleared after weeks of gloop clogging it up.  It has taken a variety of things to clear it so I cannot with confidence name the winning method.  His gingerness wanted to be included in the photo so it was churlish to refuse.

Thanks as ever to Helen for hosting this meme.
echium edgeworthia End of month review End of month view fernery hollyhocks