August 01, 2016
I received an email some weeks ago now asking me if I would like to trial a Buff.  I knew what a Buff was because of a previous conversation with some gardening friends some months previously, but other than a quick browse around the website at that point I had not gone any further.  So when the email arrived I had another browse around the website and thought it was something I would like to try.

Then there was the tricky part, I had not realised how tricky this next part would be.  I had to choose which one.  This was not easy, there is a Buff for everyone, but what kind of Buff person am I?  Then I saw the one that called to me, the one that made me smile, it was the  JD Time to Nest Buff  from the Julie Dodsworth Collection. 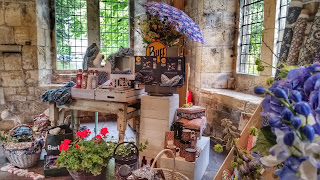 Picture of the Julie Dodsworth Collection by Kitshack

It is a very pretty Buff, it is also very useful.  It became, very quickly, a constant companion as it packs away very small and weighs virtually nothing. It is, above all, practical.  One day I was out garden visiting and whilst it has been really warm recently an unexpected cloud covered the sun and it was suddenly not as warm as it was.  I had no coat or jumper as it was meant to be a warm day, but there was now a chill.  Out came the Buff and I wore it as an impromtu scarf, it provided just that bit of chill-defense I needed.

A week or so later and the heat has really kicked in, we are suddenly having that elusive thing called a summer.  On a hot sweaty day in the garden the Buff is very good for mopping a sweaty brow; and yes, the Buff is very washable. 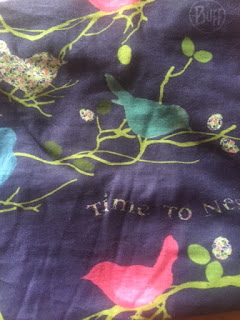 The website gives different examples of what a Buff can be used for and it is truly a very versatile thing.  I have worn mine a time or two as a head-scarf to keep the sun off my head when I have wandered out leaving my sun hat behind.  I have also been using it as a hair band as I am currently growing out my fringe and it is perfect for keeping my hair out of my eyes when I am working in the garden. 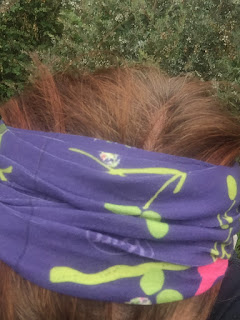 I don't think my roots need doing just yet do they?

I really like this buff, it is one of those simple yet brilliant ideas.  You can use it in so many different ways and it looks good. I am now thinking of buying a couple as Christmas presents for people who I know would love one (is it too soon for the C word??).

So what kind of Buff person are you?