August 04, 2016
I had placed Wyndcliffe Court on that imaginary yet no less real list of places that I wanted to visit.  I enjoy a sculpture garden and I enjoy an Arts and Crafts garden, so the two combined made it a 'must make time'.  I need to confess that it turns out that whilst I knew it was near Chepstow, that Chepstow was not where I thought it was.  Let's just say I might (only might mind you) have heard Chepstow and thought Chester.  Anyhoo....

I then heard the other day that Wyndcliffe Court, (Chepstow, not Chester) was closing for good at the end of September this year.  This made me reach for a map and try and see if I could work out a visit.  Joy of joys, it not being in Chester but actually in Chepstow opened up an opportunity as I had a trip to Devon already planned.  From where I live Chepstow is pretty much on the way down so my lunch time stop was decided. 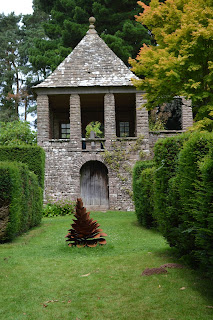 It has to be said they really are very fine gardens.  They were first planned Henry Avray Tipping.  I confess I was not aware of him but he certainly planned a well thought out garden and was clearly an interesting man.  I had one of those moments when I wished I could have visited the house and gardens in their hey-day. 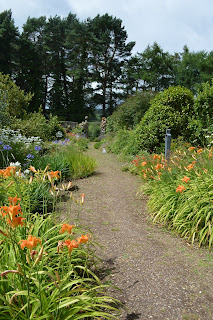 There is good use of colour, 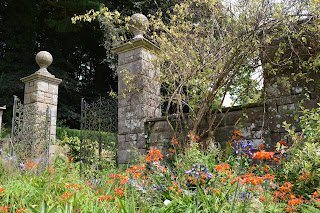 some wonderful structure to work around, 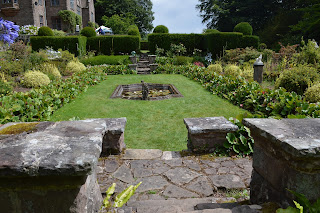 and a good mix of formal and informal. 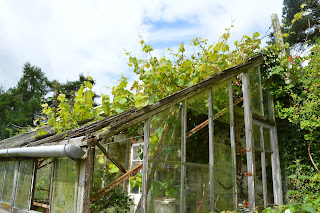 It is fair to say that some parts of the garden, like these greenhouses, have seen better days. 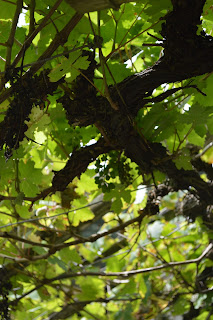 The vine inside was still doggedly producing grapes. 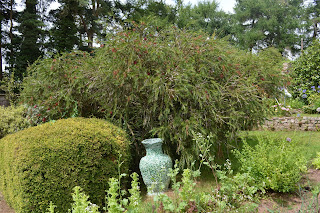 In the walled kitchen garden there were at least three large callistemons.  I do not think I have even seen such mature shrubs.  I was slightly in awe of them. 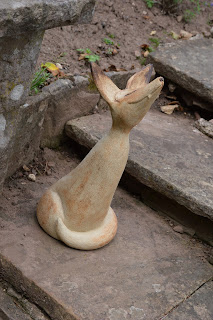 The scupltures fit in well around the grounds. 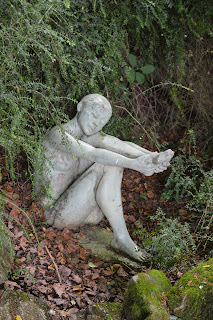 This lady appeared to be having a bath in a puddle of leaves. 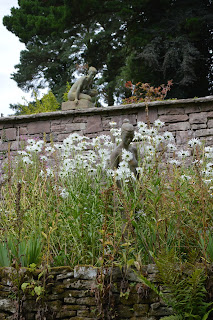 I like this picture alot, I want to call this scene 'Don't Look Now', or better still 'She's behind you!' 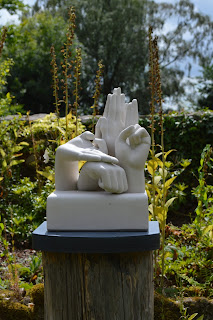 I loved this sculpture, it reminded me of the Helping Hands from the film Labyrinth.  This was probably my favourite of the day, but it was hard to choose. 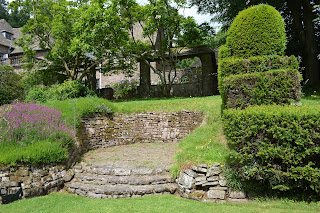 There is some good topiary in the garden and some niches like this that look like it should have a curved bench situated in it.  If you stand on the raised area.... 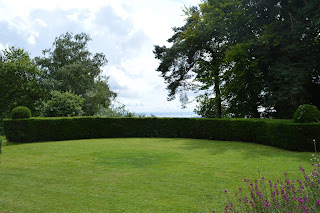 .... you look out across this almost circular perfect lawn at the view....... 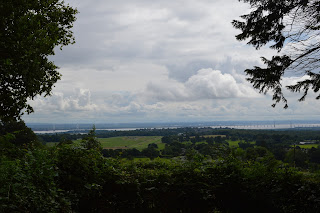 ...it is some view.   I could have stood there for hours, it was amazing.  I pondered whether the owners at the time thought the Severn Bridge enhanced or spoiled the view?  Now it is just part of the view and to me it is rather a wonderful structure.  I drove over it on the way home the next day which for some reason was slightly more exciting than I would have thought. 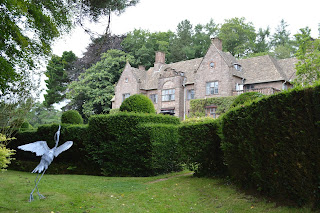 The house itself is a great example of Arts and Crafts.  As I wandered around the garden I felt it had all the bits that one would expect in a garden of this age.  The topiary reminded me of several gardens and the circular green pause of a lawn did as well.  The is garden firmly placed in its time.  I am going to be so bold as to say that elements of this house and garden struck notes of recognition with Plas Brondanw, the home of Sir Clough Williams Ellis, which is enough on its own to raise a happy smile with me. 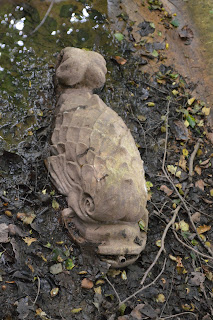 and as I've mentioned Clough, I will say I probably liked this dolphin so much, I very nearly bought it and now I wish I had. 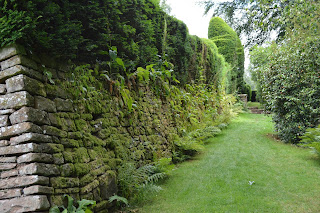 I also fell in love with this mossy, ferny, self-seeded wall.  It was beautiful. 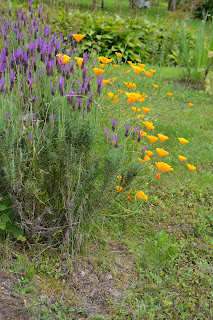 I really enjoyed my stop off at Wyndcliffe and I was very glad I visited.  I did have lunch there, which involved a good teapot (when not looking at gardens I can be found gazing at ceramics) 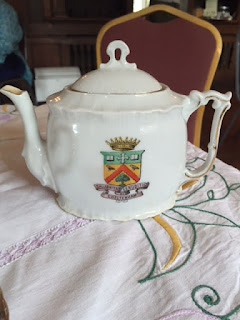 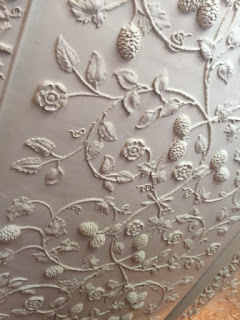 You know that when you are greeted at the door of the cafe to be told it has a good ceiling that it is probably going to be a bit of a treat, and it was.

There are lots more sculptures to see than I have shown, I am not going to show you everything as it is a place to go and see for yourself if you can.  Just remember, Chepstow is not Chester and you will be fine.....

but you only have until September 25th, so get a bustle on if you want to visit.

Other posts relating to this trip: