Irritating Plant of the Month -August 2016

August 23, 2016
Ok now this one is really annoying because it has proved me right.  There are few things as irritating as giving a plant a chance against your better judgement and then it proves to you why you had an issue with it in the first place. 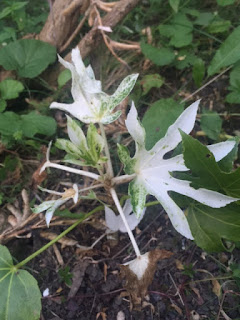 I present to you Fatsia japonica 'Spiders Web' which I bought a few weeks ago.  Look at it - it is horribly bleached.  Now I know some of you will start shaking your heads and saying things like 'its getting too much sun', 'it needs more shade', 'it's your fault you have put it in the wrong place'.  I can only concur but that does not make me any less irritated.  Its almost as annoying as  'I told you so'.

I knew that this plant did not want a lot of sun and I chose a spot where I thought it would form part of the understory.  I knew that as the other plants grew up around it they would provide the shade it needed.  Well they have not grown over quick enough and hence the bleaching.  Thankfully starting to colour up a bit again now in which case when it has it can consider itself redeemed.

I am not sure who I am most irritated by - the plant or myself.