July 28, 2016
I have been thinking about doing some retro-planting for a year or so now.  It started with some alyssum and quickly developed into a wish to grow some alyssym and blue lobelia alternating in the garden.  This was the type of gardening I grew up with and a nostalgic wish made it seem like a nice thing to try.

I did not appreciate that this would be more challenging than I expected.  Let me start this story with last year....

Last year I started to grow some alyssum from seed but could not get the blue lobelia to germinate.  This was frustrating but undeterred I thought I would get around this by ordering some lobelia plugs.

Can I give you my top tip when ordering plug plants?  Check when it says they will be despatched.  If you buy late in the season, which I did, it might be the case that they are not delivered until the following Spring.

Yes, that's right, I had to wait for them.

Which neatly brings us on to this year.  This time I lost my alyssum seeds, I should have known then that the fates were out to thwart me.  However some had survived the winter and I thought that I could get away with them for another year.  The blue lobelia plugs duly arrived and I potted them on carefully.  All was well.

Then I planted out the first batch, the slugs swooped in on them and they were reduced to stalks.

Undeterred I planted out a few more.

The slugs swooped again, burped in gratitude and lay in wait for the next batch.  Even I am not foolish enough to just plant out more, so I put out some organic slug pellets and they are sort of limping along.  However the effect is nothing like I intended yet and I wonder if it ever will be.

and then fate stepped in to lend a hand.  Fate decided to wear a hole in my coal scuttle.  I realised this after I kept seeing little coal-dusty spots on the carpet when I had moved the coal scuttle, a quick check and I was wandering around like dear Liza with a hole in my bucket.

I put the scuttle in the utitlity room thinking I would put it out for the rubbish.  Then Serendipity, whom we already know to be muse, gave me a bit of flick around the ear and pointed to the coal scuttle.

I was perplexed, what was I looking at other than a coal scuttle with a hole in the base?

and then it dawned on me.  I have spent years reading those gardening mags where they make amusing planting in recycled containers.  For years I wondered where these people got their unwanted coal scuttles from to plant up.  Now I knew! 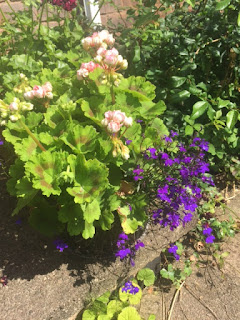 A few pelagoniums from later and there it is, my coal scuttle installed on the front door step.  It might not be quite what I intended, but I have got where I needed to be*

*with due reference to Douglas Adams:


“I may not have gone where I intended to go, but I think I have ended up where I needed to be.”  (The Long Dark Tea-Time of the Soul)