July 08, 2016
I enjoy the Conceptual Gardens at Hampton Court Flower Show very much.  I had two gardens in this category that I really wanted to see this year so they will take priority in this post.  Firstly there was the Near Future Garden designed by my friend Arit Anderson (shameless name dropping there, do I care, not at all).  I have known Arit for a few years now.  I first became aware of her work after she co-designed a Fresh garden, Bird Columny, at Chelsea Flower Show in 2013.  We met at an event shortly after that and have been friends ever since.  I was delighted and excited for her when she told me she was designing a garden at Hampton and I decided there and then I had to see it. 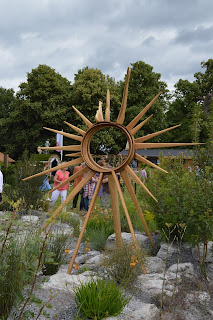 The garden is designed to walked through and around, this is very much a feature of Hampton Court Flower Show gardens, they have an accessibility that Chelsea Flower Show Gardens generally do not.  The garden is based on the theme of climate change, it gives no judgement as to the causes of climate change but it is difficult to argue that it is not happening (otherwise we would still see woolly mammoths wandering down the high street).  The garden is hot and dry with a superb whirlpool in the centre. 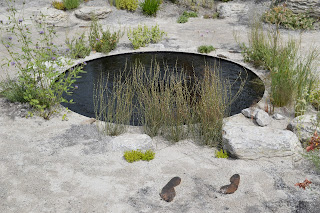 The footsteps through the garden were a wonderful touch. 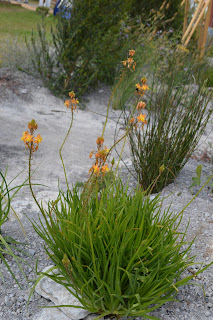 The planting is colourful and perfectly planted with its scorched surroundings.  The garden includes sculptures from Charlie Whinney. 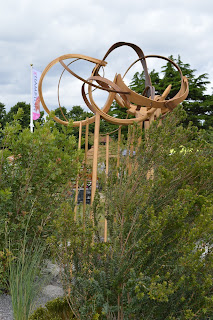 These wooden sculptures work perfectly in the garden and are really quite something. 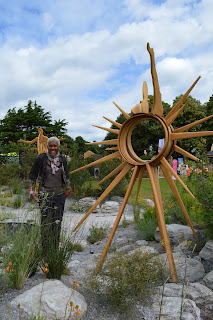 Friendship aside, I liked this garden a lot and I when I heard it had achieved gold I was totally delighted.  The judges had got the result right (of course they had, they agreed with me).

Moving on to the next conceptual garden I was keen to see, the UNHCR Border Control Garden designed by Tom Massey and John Ward. 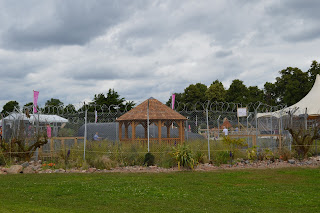 This was also a gold winning garden and again the judges correctly agreed with me.  This garden is to highlight the plight of refugees.  There was some talk in the press about this garden being ‘shocking’, I am not sure I found it shocking but it was disconcerting and it did its job in making me think. 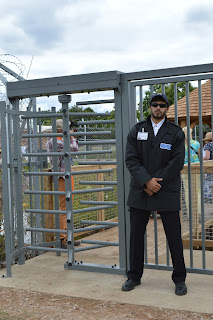 The security guard played his part well, he stood sternly and managed how people entered the garden.  Without speaking or moving he was intimidating.  In our comfy lives where we get to spend a day wandering around a rather lovely flower show, a moment of remembering that the ability to spend days like this is a privilege is no bad thing. 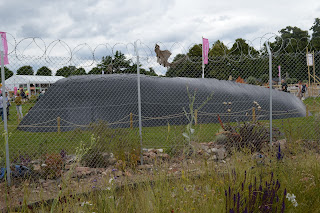 The views from inside the garden also worked well, it was of course chance that the neighbouring garden from this side could be mistaken for a bunker. 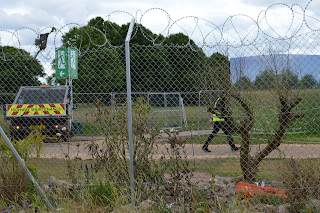 The work going on outside the garden also seemed to add authenticity.  There was a distinct feeling of very much looking out through the fence to a different place. 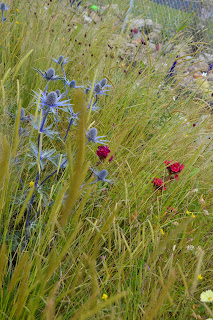 The garden is beautifully planted.  There is wild, half-dead scrub planting around the outside of the fence and inside the most wonderful meadow planting. 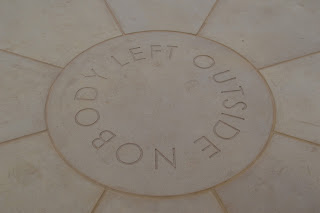 The meadow planting is to represent safety, but even within this safety the world outside of the fence can still be seen.

Both of these gardens are in the Conceptual garden category and I do think that it is the Conceptual Gardens where Hampton Court really excels itself.  These are the cutting edge, the gardens to make you stop for a moment and think.  You are not intended to go away and recreate the look back at home (though elements of course you can interpret as you wish), the point of these gardens is to show a different edge.  The two highlighted above did that with great panache.

I also enjoyed this row of  greenhouses which were called..... the Greenhouse Effect - well,what else could it be. 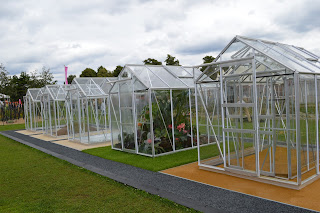 This was designed by Sheena Seeks and whilst you can argue about what makes a garden, it did make its point. 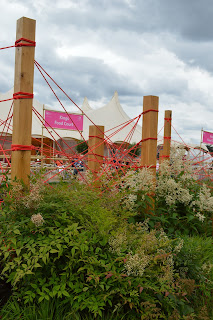 The Red Thread designed by Robert Barker is based on an ancient Chinese myth that gods tie red thread to our ankles when we are born and attach it to all the people whose lives we are destined to touch.  I really like the idea of this, it is one of those 'stop and think about this for a moment' moments. 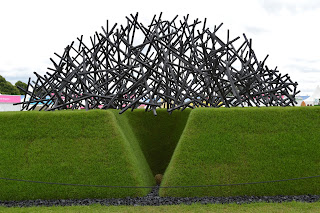 I loved this, it was designed by Tony Smith for Rolawn and is called 'Why?'  I think this is a very apt title. It is meant to represent the complexities of the human brain, the black rods represent the human mind. 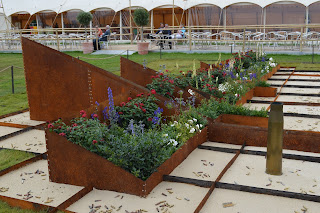 This is Peacemaker designed by Katerina Rajaf and is about focussing sympathies for communities suffering violence throughout the world.  How apt this is in the time we live in.