July 31, 2016
As July ends the year still feels slightly behind, summer has finally arrived and the weather has definitely warmed up. 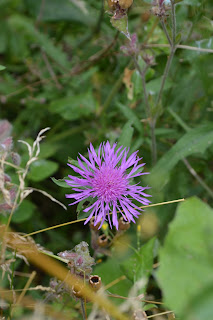 This Knapweed is the legacy from a packet of seeds I bought on the Isle of Man getting on for eight years ago.  I sowed them and was really happy when they germinated.  Then it became a bit invasive, (is it possible to only be a bit invasive?).  I spent quite a bit of time controlling it in the front garden and still have to remove it from where I think it should not be. I planted some of the seedlings into the driveway as I am happy for it to dot about there.  I'm relieved it has decided to comply with this request, well mainly anyway, and I can now happily continue to remove it from the front garden. 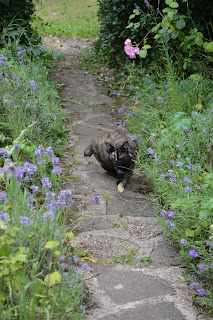 The lavender that lines the front path is flowering well and Esme approves of it. 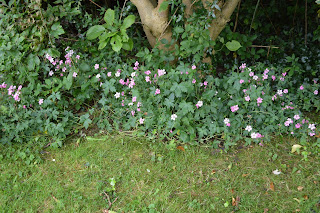 This pretty little geranium is under the magnolia tree in the front garden.  I relocated some divisions to under the tree some years ago to see if it would thrive and light up this dark corner, I think it has done this well. 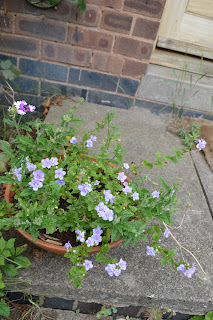 On the front step this bowl of Verbena 'Purple sparkles' and Bacopa 'Blue Hollyhock' has been flowering for weeks.  It is a bowlful of cheer. 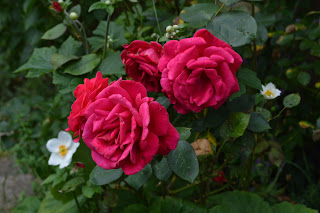 The white Japanese anemone in the front border is starting to flower and I always like how it looks with this red rose (name unknown). 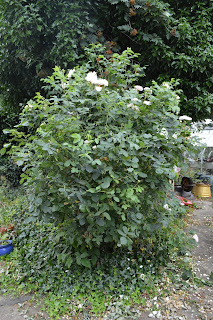 Around to the back of the house and the Rosa Maidens blush has developed into a small mountain of a rose.  It must be over six feet tall.  It still has a tendency to mankiness but I feed it regularly and it rewards me by wafting its scent around on these warm summer evenings. 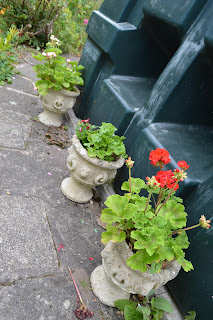 This row of zonal pelagoniums is doing very well.  These planters are incredibly heavy but I like how they look. 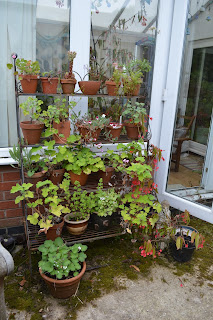 In the Courtyard the pelagonium stand is looking good as well.  They are all growing well. 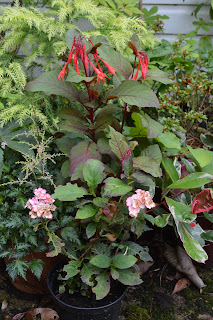 This species fuchsia and Hydrangea macrophylla 'Miss Saori' look good together.  The hydrangea was sulking a bit so I moved it forward to get a bit more light.  It has rewarded me by flowering. 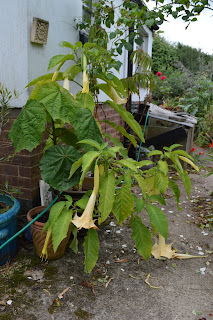 Just by the edge of the Courtyard are two of my very favourite plants.  The Brugmansia is flowering like a flowery thing. It has the most intoxicating vanilla scent.  Just by the side and slightly overwhelmed by it is my dombeya. Well, in truth it's 'son of dombeya' as the original plant died over the winter, but the contingency cutting I thankfully took has grown really well. 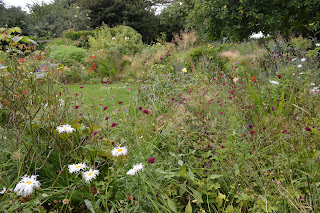 The view across the Conservatory Border is pleasing this time of year.  The Leucanthemum superbum 'Phyllis Smith' are dotted through the border and the white gives the borders a lift. 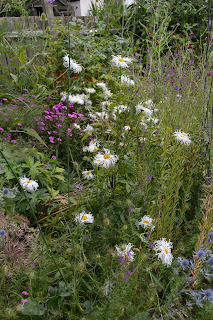 They mingle well with other border stalwarts such as the Geranium 'Patricia'.  I divide these plants every now and again and so they repeat merrily throughout the garden. 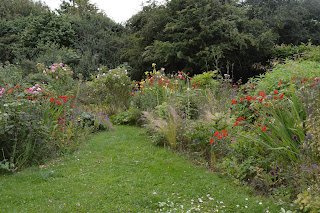 This is the view from the formal lawn down the Long Shoot.  The Crocosmia 'Lucifer' adds darts of red on both sides.  This is what I wanted to achieve as I like the idea of a repetitive rhythm of planting. 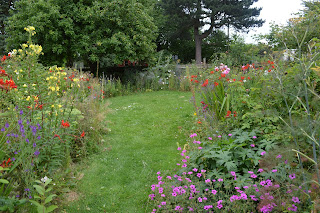 This is the view going back the other way.  You can see the Evening Primrose that has turned up this year. I shall have to keep an eye on it as I know it seeds well, but I don't mind it seeding around a bit willy-nilly.  (Willy-nilly is a technical term that all the top garden designers understand.......) 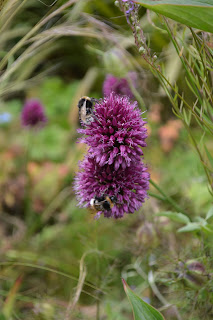 It is bee time in the garden, plants such as this allium attract them well. 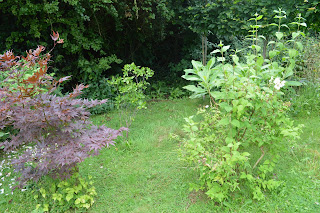 The Four Sisters are growing well and if you peer into the background you can see the fernery is coming on as well. 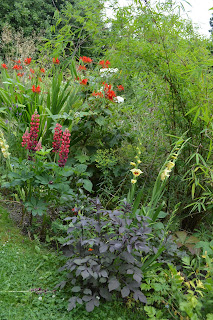 The Exotic Border is getting ready for the dahlias to start to flower.  The lupins and the gladioli are doing well. 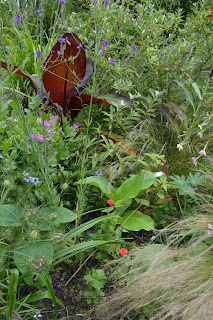 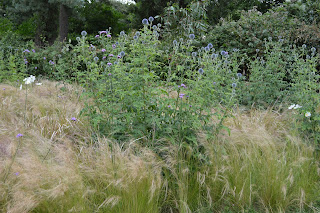 The Prairie Borders have some white cosmos flowering in them.  There are not as many has I had hoped flowering yet, the slugs have eaten many but I am hoping that they will start flowering soon. 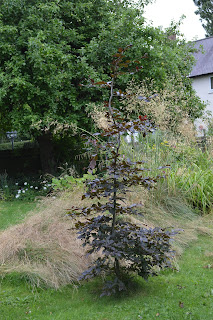 This purple beech pillar is almost looking like a pillar now.  I have three and they have been twigs for most of the time.  They have finally reached the stage where I am shaping them and I am hopeful that this will mean they will bulk up soon. 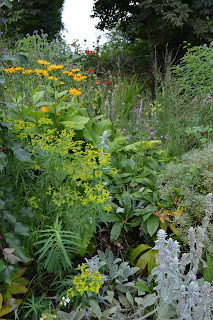 The Woodland Border looks good from this angle.  I will therefore only show you this angle. 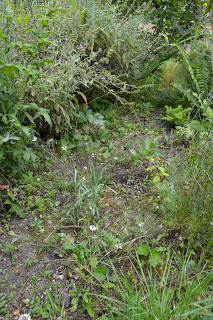 Oh ok, there is this angle as well, it is also looking quite patchy.  Mainly this is because what was planted here has been eaten by the hoard of slugs that have been marauding around the garden like a plague of....... of........ slugs? 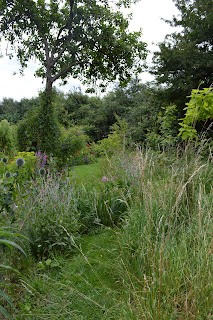 The view from here in the garden is quite pleasing.  The Woodland Border is to the left and the Wild Garden to the right.  The path winds down across the Dancing Lawn towards the Exotic Border.  One's dances should always border on the exotic...... 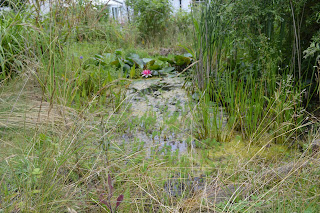 I end as ever with the pond, still a bit sludgy but better than it was.  The waterlilies are flowering well and that is a good thing.

Thanks as ever to Helen for hosting this meme.
Brugmansia Dombeya End of month review End of month view Hydrangea Miss Saori