A quick run out to a plant fair

May 12, 2016
An hour or so spent at a plant fair is rarely time wasted.  Even if no plants are purchased the excuse to wander out and catch up with a friend is worth it alone.  I had never been to Donnington le Heath before so that chance to go to a plant fair there was not one to be missed,  especially not as it had a good list of nurseries attending.  For various reasons I did not get to RHS Malvern this year but I knew I could get my plant fix closer to home at this fair. 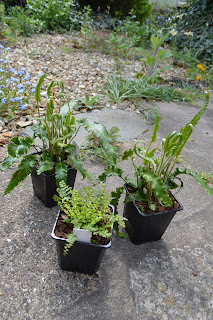 Firstly I bought three ferns from Edrom Nursery.  2 x Asplenium scolopendrium Angustatum and 1 x Asplenium trichomanes.  These are now planted into the fernery that is getting to be almost full.  I think there is space for one more fern.

Then we moved on and found the Cotswold Garden Flowers stall.  We were there quite a while....

.... in the end two purchases were made:

The first plant that caught my eye was this one: 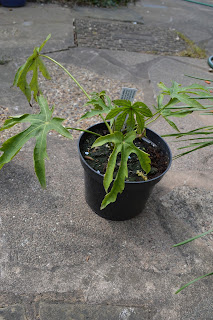 Fatsia polycarpa cut-leaved form, which apparently used to be Needham's Form.  I  was drawn by the wonderful leaves, they are quite different from the 'Spiders Web' I bought the other day and I decided I had to have it.  It is a bit young so I have potted it up and put it in the Courtyard for now.

Next I found this: 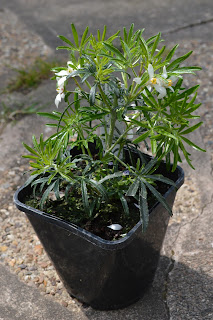 A Choisya 'White Dazzler'.  Now, I do not like choisyas very much.  Most of them leave me totally cold to be honest, especially the yellowy-sick looking ones.  What I liked about this one in particular was the finely cut leaves, it has subtlety that drew me to it.  I nearly put it back when I read it was a choisya, but I am glad I did not.  The label quotes Graham Rice and apparently it is his favourite plant.  I could not claim it was my favourite, but I suddenly felt in good company.  This too has been potted up and put in the Courtyard for now.

It was a successful trip, it is about twenty minutes drive away so there was plenty of the day left to get out into the garden.  There will be another fair there in August, I predict a return visit.
Asplenium Choisya Cotswold Garden Flowers cut-leaved form Donnington le Heath Edrom Nursery Fatsia japonica fernery Needham's Form Plant Fair White Dazzler