April 24, 2016
I have been fairly obsessed with Edgeworthia chrysantha since the moment I first saw one.  They have the most amazing scent and flower early enough in the year to mean that they will not go unnoticed.  I have owned several and I have killed a few (but then again, too few to mention...).  I had one that lived in a pot quite successfully for years until I moved to this house.  I then planted it in the garden and killed it.  I think I tried again after that to no avail so this one that I bought in 2013 was pretty much a last attempt.

I planted it in the most sheltered part of the garden where it forms one of the four sisters.  Every year I watch it carefully, hoping that it does not die in the winter and hoping that it might flower in the Spring.

So far in terms of not dying it is 100% successful, it is not dead.

In terms of flowering, well that has all got a bit exciting this year.  Let me demonstrate: 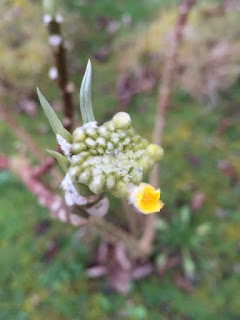 The first sign that the bud that had been promising much but doing little was actually going to perform. 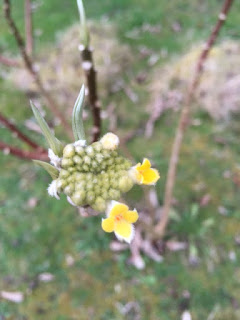 Two florets opened and it was suddenly looking really possible. 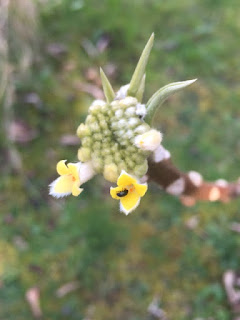 A bug joined in to see what the fuss was about. 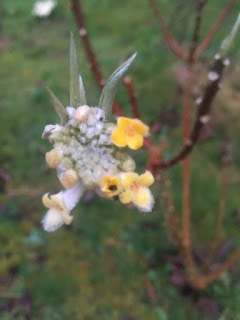 I reckon that is four. 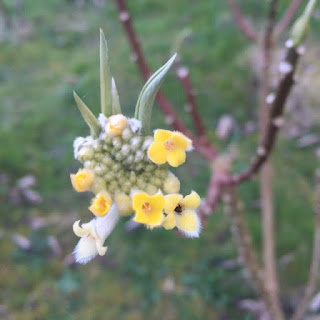 Four and a bit? 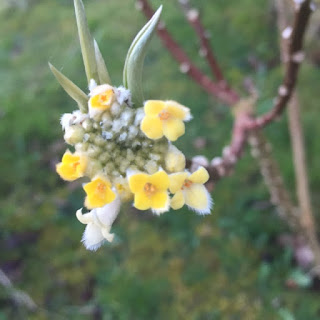 Six and a bit and enough that I can actually smell the wonderful scent. 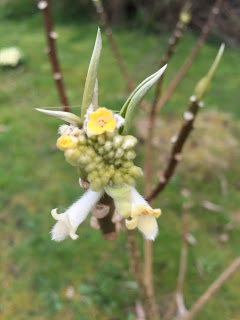 But then, alas and alack, a retrograde step. 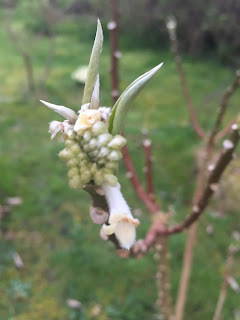 and back we go to nearly the start.  But it is ok, I am not downhearted in fact I am happy.  Yes I will be anxiously watching the edgeworthia again all next winter, but I shall also be excitedly awaiting flowers as now I know they are possible.
Edgeworthia chrystantha