Stoneywell, where daffodils are the new snowdrops

April 14, 2016
I do love daffodils, I always have, even as a child their cheerful beauty is something that has always delighted me.  I plant some every year, some in the borders and some in the grass in the Wild Garden.  Over the years I have bought lots of different sorts and my taste has evolved and developed as I have learned all the different varieties there are. I still love the big yellow trumpety ones and recently I have become enamoured of miniature ones such as 'Elka', cyclamineus, pseudonarcissus and bulbocodium.  My latest must-buy bulbs were Narcissus Telamonius Plenus, I saw a picture of them at a recent talk about Capability Brown and I wanted some, I found a seller and that was that, 50 bulbs were ordered.

So, imagine my delight to visit a garden absolutely awash with daffodils.  More daffodils than I remember having ever seen before gathered in one place. It was a revelation.  It was a garden I have visited before: Stoneywell.  I last visited in November 2014 and it was very interesting to see the garden at a different time of year.  The day, however, started with a picnic. 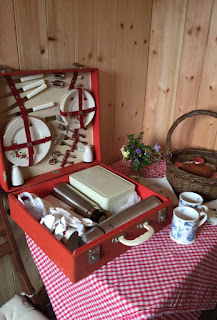 Picnicking has become this year's habit and is definitely to be encouraged.  We were given permission to sit in the National Trust shed as it was still rather wet and chilly when we got there. 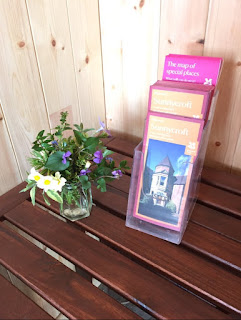 We left our table-posy as a thank you.

Soup, cake and Tunnocks tea-cakes were consumed and the weather brightened up on cue.  We were ready now for our afternoon. 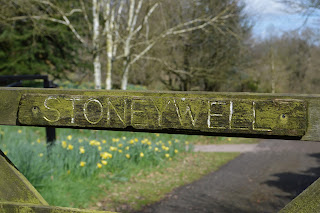 We started our visit this time by escaping down the lane.  It was an escape, you are not meant to go wandering off by yourself which I think it probably for two main reasons:  firstly the road has no footpaths and so is rather dangerous. Cars drive down it frequently enough to make it a risk.  Secondly I think it is to protect the privacy of the neighbours.  This seems very reasonable to me as it could be quite a shock to suddenly find you were living next door a National Trust property.  I made sure I  photographed the daffodils that lined the road from a respectful distance. 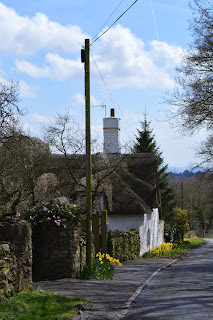 I also paused to admire the stone gateposts for Stoneywell, 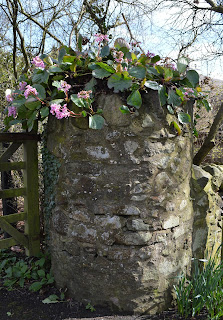 They are rather wonderful, a real slice of Arts and Crafts in their circularity.  I also love the bergenia that is growing in the top of them.  I dislike begenia generally but here they work so well, I am reassessing my views on begenia. 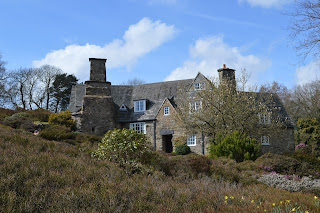 It is the most wonderful house, it fits so well in its landscape. 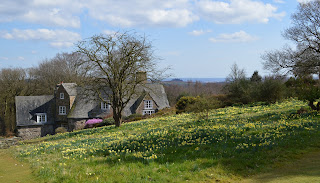 and look at the drifts of daffodils.  They were everywhere, nodding their heads in happiness at the Spring sun.

These will all have been planted decades ago, I love this one with its pale pointy outer petals. 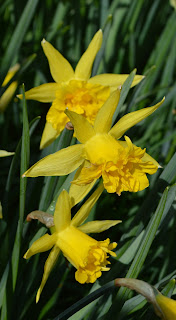 and this one, which was abundant, could this be the Telamonius Plenus I have just purchased? 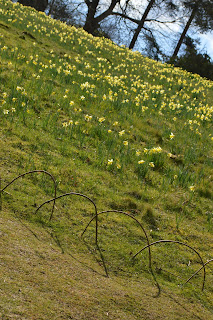 The ground is not this steep, but it is quite steep in places, and just daffodil after daffodil.  I am now certain I do not have enough daffodils, this is now a definite fact.

I also went for a wander around the woodland, which is a mix of native trees and some fantastic rhododendrons. 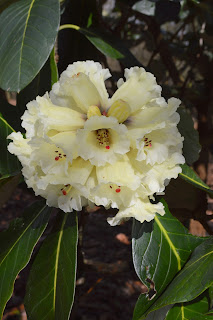 Look at the beautiful red spot in this one. 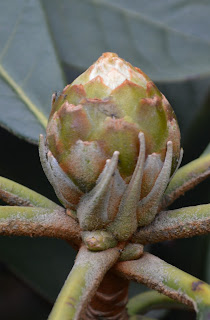 and I think that size might matter, this was huge. 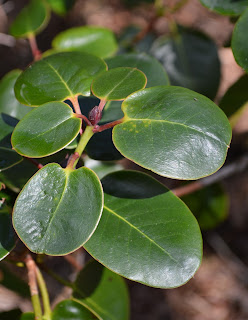 and this was glossiness abounds.  I do not know its name, but I want to.

Back into the garden that surrounds the house and there are more rhododendrons and azaleas, the gardens were buzzing with all the bees and insects. 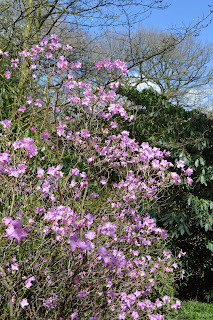 I particularly liked this one with its pale, almost pale green, flowers. 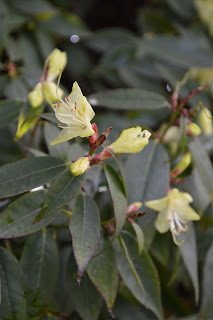 As I dislike green flowers this was a new thing for me. 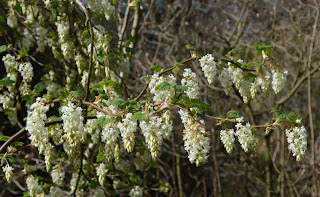 I also fell in love with this white flowered ribes.  You can expect me to have purchased one very soon. 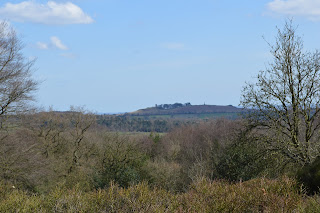 We stopped and sat on one of the seats in the garden to admire the view.  Apparently originally the house was going to built on this high part of the garden but it was eventually built in the hollow just below where we sat.  As we stared across the Leicestershire countryside I mused as to which direction my house was.  We decided neither of us had a clue until we realised that sticking up on the hill opposite was Old John, the folly in Bradgate Park.  Suddenly we had our bearings and there was pointing and agreement as to direction.

But the day was really about daffodils, they were the star of the show and as I wandered through them I decided that whilst drifts of snowdrops are good, the spectacle of these daffodils were on another level.  I shall have to visit again soon to see what else this garden has to offer.
Bradgate Park Gimson National Trust Old John Stoneywell