The quinquennial of the quince hedge

March 13, 2016
Way back when in 2011, when this blog was quite new and the garden was five years younger, I wrote a short piece on the quince hedge I planted in front of the house under the lounge window.  At that point it was a scrubby row of twigs rather than anything resembling a hedge.

I was also at that point pondering a second pond.  This pond never came to be and is now the site of the bog garden and the woodland border.  I remain glad that the pond idea faded.

A couple of years on and I updated on the hedge and the non-existant pond.

I was then having aspirations of a heather spur.  It was a short lived aspiration.  I still have some heather in the extended border but it has never quite taken in the way that I wanted.  I need to return to this idea at some point as it has been a disappointment.  The quince hedge was not hugely impressive in how it had developed either, but I persevered.

Another year passes and it is the 2015 update.

The hedge is sort of getting there.  It was starting to put on some real growth by this point and I was starting to be able to trim it into shape a bit.  Now this trimming helps hugely as it encourages it to branch out more.  The more branching it does the more I need to trim it a little again.  This is all good.

and now?  well now it is still not a hedge, but it is definitely improving. 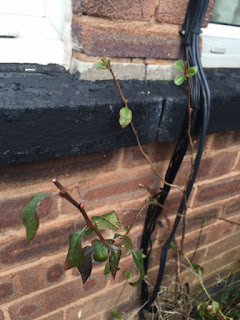 This might not look like much to you, but this is the quince reaching over the windowsill.  I trim it to keep it at windowsill height and every time I do this now there are more branches to be trimmed.

This makes me happy. 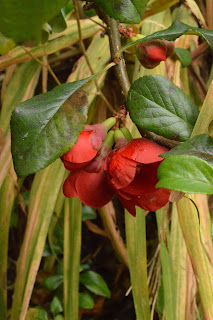 It has also been in flower for weeks and weeks now, since November in fact.  This is very good, it is a great attractor for bees and so very useful in the months when flowers are fewer in the garden. 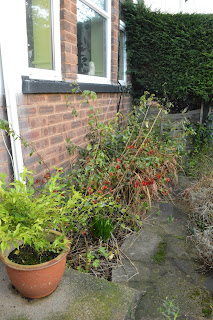 No, its not quite a hedge, but it is more hedgy.  I am hopeful it will be even better when I report back next year.
heather spur quince hedge