March 27, 2016
The other day I was reading an article in the Guardian written by Alys Fowler about what to plant on a damp grave.  This coincided with a recent conversation I had when wandering around a graveyard looking at snowdrops and primroses.  As we walked through the graveyard we discussed the various mementos that had been left in memory of loved ones.  Some contained baskets of primroses, some had some dwarf lime-green conifers.  Others had plastic wreaths still there from Christmas and other assorted plastic flowers and ornaments.  All of these are valid ways to remember those no longer with us, but it did start a conversation about what I would want and definitely not want on my grave. 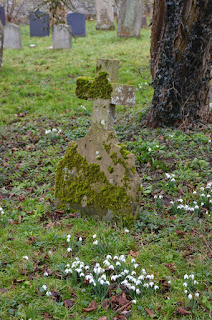 The conversation was purely an exercise in discussion as I have been clear with my family that burial is not for me.  I want scattering (they know where) and I want a bench with my name on it (they know the phrase it has to contain), but this still did not stop me considering what would make me spin like a top and what would be acceptable.  As with most things, this is not something I would want leaving to chance.

I think hellebores are a good starting point as they flower at the most grey time of year.  They bring a smile and are tough as old boots.  If I was lucky they would self-seed around and spread a bit of happiness.  Hellebores are definitely on the list.  I would also like some snowdrops and primroses.  This time of year I would want colour.  As the season develops then I would like some simple wild flowers preferably in some long grass, a mini-meadow would suit me just fine.  I would insist on a poppy or three, but that is because even in death I will still be that predictable.  (Not wishing to stretch this too far, I would be totally predictable as my ability to do much would be limited).

Have I mused too much on this?  Probably, but a wander around a pretty graveyard is something I do rather enjoy.  I like that they become havens for wildlife and wildflowers.  I like reading the headstones and thinking about the lives that are no longer with us.  I wonder about the families you see buried together and think about what their stories might have been.

and Alys's suggestion of Primula florindae is a fine one, I could almost be persuaded to be buried in such a place.
Alys Fowler graveyards hellebores snowdrops the Guardian wild flowers wildlife