February 28, 2016
I recently attend the Garden Press Event which is where many garden-related businesses go to show their wares to press and bloggers.  I met lots of very nice people and saw some very interesting products and as the year progresses I will be trialling various things as a result of this day.

One of the companies I spoke to was Burgon and Ball.  Now I have been aware of this company for many years and I own several garden tools made by them including some wonderful topiary clippers that I must have bought at least seven years ago and they are still going strong.  I was delighted that in the press-bag that they gave me was a Poc-Kit belt. 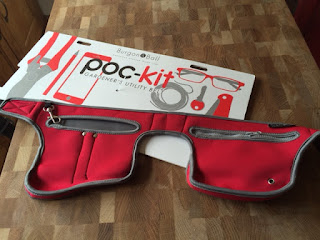 This belt comes in several colours but as I am a very predictable person, I spotted a red one and asked if I could have that one.  I had been looking at these belts for some time and thinking that I would really like one; it was on the list of things to investigate further.

When I got it home I had a think about how I would use it.  I realised quickly that as a knife holder it was very useful and it also has one of those holes to let you have string/twine readily to hand.  This is just the most useful thing ever!  Well, ok I might exaggerate, but the moment you think "I need string for that" then usually "that means going back to the greenhouse" now is "oh look, I have some string in my useful belt-thingy". 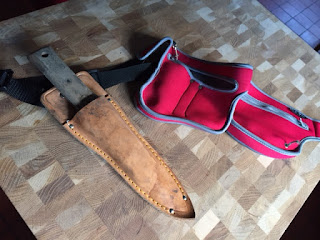 I could not, however, fit my hori-hori into the pockets.  There was a moment when I considered it but even with my poor spatial ability I could see it was just too big.  This was a disappointment.  A moment or two later and a little bit of fiddling about with the buckle and I had  successfully attached the hori-hori holster onto the belt.  I now felt like Batman reborn!  The utility belt that most of us who grew up watching Adam West as Batman have craved for was finally mine.