What sort of a person has a power complex about flowers?

"What, are you gardeners? I hate gardening! What sort of a person has a power complex about flowers? It’s dictatorship for inadequates. Or to put it another way, it’s dictatorship."  Doctor Who (Season 9 E.11). 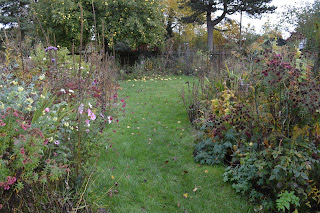 Well, that's me found out then.  It is a sentiment hard to argue with, well, I'd rather not be called inadequate (but if the cap fits....) but the rest of it has to be pretty much spot on.  Gardening is about control and the management of space so that it bends to the gardener's will.  Even if that will is to have a wild space, if any plant is managed, encouraged, discouraged then there is control occurring.

I was going to say next that I was talking to a non-gardening friend the other day, but of course most people are gardeners to some extent unless they have no growing space what so ever.  Many houses have gardens that people garden to some extent even if it is just mowing a lawn.  Many of these people would not describe themselves as gardeners but in truth they are.  This is a long-winded preamble to the point I was aiming for: I was talking to someone who described themself as not a gardener and who went on to say that most of their gardening was about trying to gain some sort of control.  After a brief moment of pause I replied saying that that was what most gardening is, just that we might not express it in quite that way.

Of course the reason for that control is that we want our gardens to look in a certain way, we have a design idea in our heads that we want the garden to conform to.  So our desired look might cottage garden, prairie planting or a stripy mowed lawn or just have some rather nice raked gravel.  Dare I say it, we might just want our gardens to look pretty (lovely/beautiful/awesome).

I am going to struggle though with being disapproved of by Doctor Who......
Doctor Who gardening