The descent of winter

January 21, 2016
Finally Winter has made its presence felt.  It has been mild and rainy for so many weeks.  We had the odd frost but generally nothing serious and nothing that has lasted until lunchtime.  Now we have the real thing, firstly a sprinkling of snow and then that real frost that gets into the soil and locks everything solid. 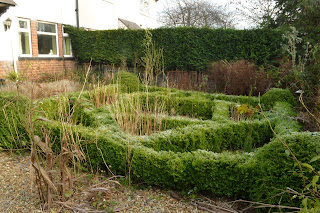 It is the time of year when the Knot Garden gets a dusting of frost.  I always think that frost and snow work really well with the Knot Garden, how they cling to the Box hedging gives it an added dimension. 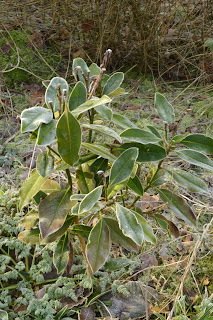 As I wander out of the front garden and into the drive I start to think about the different microclimates the garden has.  Only a few steps and there is a real difference in the amount of frost.  The top end of the drive near the house is quite open and the frost and ice always fix deeply.  This Magnolia grandiflora 'Little Gem' is looking pretty with its iced leaves, but is definitely shivering. 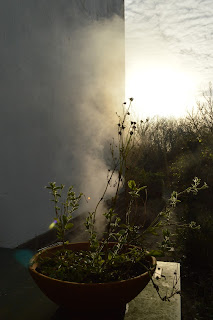 I then turn to go to the back garden.  I pass the Petunia exserta that has been living on top of the boiler for the summer.  Maybe this heat has helped it keep going?  It does look rather ethereal with the steam (fumes??) that are coming out of the boiler exhaust. 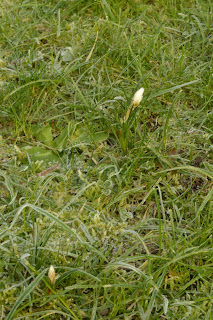 By the pond of the first of the crocii are emerging. 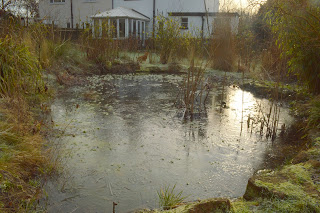 The pond itself has a thick layer of ice covering it for the first time this winter. 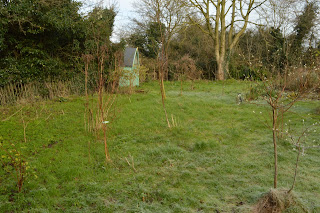 As I turn and look behind me there is a clear line where the sun has touched the grass.  The side boundary sheltered by the trees that make up the hedge. 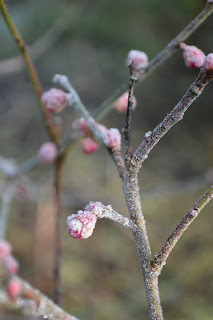 The Prunus Ben-chidori is quite frozen. 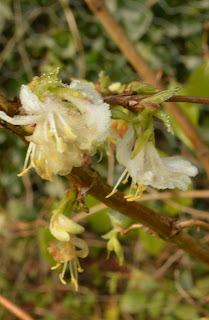 The Winter Honeysuckle has that frozen/translucent look about it, a bit watery but still hanging together. 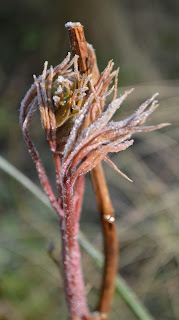 and as ever the Tree Peony looks amazing when covered in frost.  I think this plant is almost worth growing for when it starts to grow, never mind its beautiful flowers that come later. 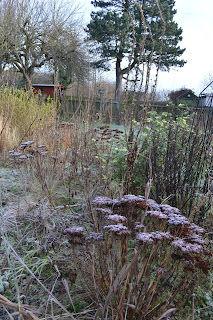 The Pond Border gets quite heavy frost, it is more central in the garden and has less to protect it.  These sedums give really good structure at this time of year.  I have added more in this year as I like the way they repeat down the border.  It was one of those better moments of thinking that I have had.  I have read a fair amount by and of Gertrude Jekyll in my time and the notion of rhythm in repeat planting along a border is something I can fully subscribe to.  I do not often get it right, but for the sedums I think I might have. 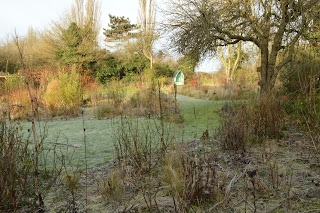 But best of all on days like this is when the sun starts to sweep down the garden.  Where I am standing now, directly behind the Conservatory Border, is the last place the sun touches in the day.  The garden slowly defrosts in line with the sun.  Plants at the top of the garden will open their flowers a couple of hours before the ones down here near the house.  Yet this corner is not too harsh, plants grow here well and when the sun does arrive it lingers here the longest.  It is no coincidence that I am standing next to the wine bench, where I like to sit on warm summer evenings and catch the last of the sun with a cheeky glass of red.

Ah summer, so far away, your time will come.  For now I am enjoying this period of stillness caused by the frost.  The garden needs a moment to stop and think as do I.
frost Gertrude Jekyll Magnolia grandiflora 'Little Gem' microclimate Petunia exserta prunus ben chidori winter honeysuckle