and then it snowed

January 17, 2016
Yes the first snowfall of this winter has arrived in this corner of Leicester.  After weeks of grey mild rain, the temperature suddenly did a dive.  We had a couple of practice frosts and then went straight for the white stuff. 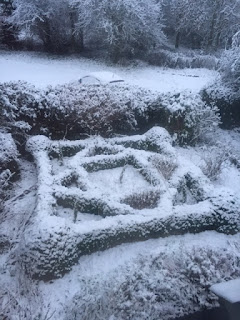 This photo was taken before it was totally light, it was my first opening of the curtains to see if we had had the promised snow.  There was more than I had expected, dare I say hope for?  Yes, I can say hoped for.  Snowing on a Sunday when I have no plans fits into the childish remembrance of snow as exciting.  Come tomorrow morning when I have to drive to work my grown up remembrance of snow as dangerous, disruptive and just plain cold will be back in place, but for this  brief day I allow myself a romantic view of the white stuff.

I also can forgive it much as the Knot Garden responds well to snow.  As commented to a twitter friend, it hides a multitude of sins.  From the above angle the baby cypress trees can be seen quite clearly.  I have big hopes for these trees as the Knot Garden needs some work this year.  I predict the buying of more gravel...... 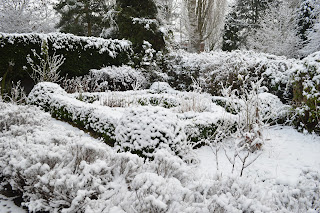 Once the daylight had finally arrived (or should I say I finally got up and greeted the world properly), I rushed outside to take snowy photographs before it started to thaw and got walked on too much. 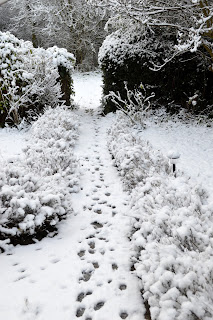 However in a household that contains four cats (only three ever really go out) it is impossible to find completely unwalked on snow.  It looks like its been a busy night of poddling up and down front path this morning. 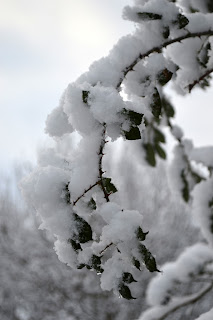 The snow has settled on this invading bramble, making it briefly a feature before I remove it. 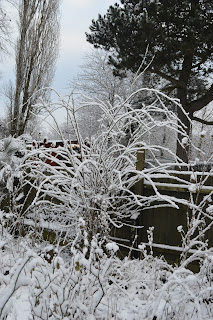 Snow is good on thorny plants, this Rosa Rugosa which is in real need of cutting back is looking beautiful with its arching stems. 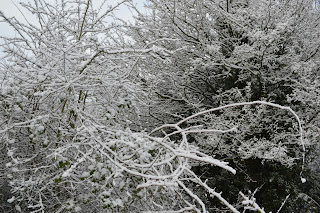 Further along the garden on the other side where the boundary is largely made up of trees, this Rosa Kiftsgate is also arching its way along.  I planted this rose a few years ago fully in the knowledge that it was a beast of a plant.  It has been slow to establish but is now starting to romp around the boundary.  It is more effective than barbed wire and infinitely more beautiful. 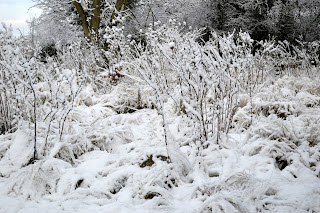 Less spikey, but no less structural, the Prairie Borders look a little lumpy but the dead stems of the echinops work well to give height and form at this time. 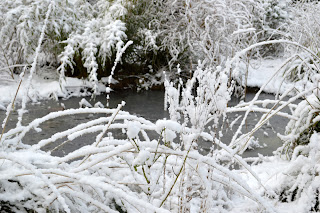 The grasses that edge the pond make a great foreground to the frozen water. 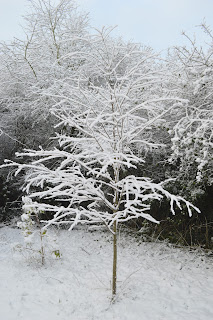 Before the thaw sets in, the Katsura Tree is picked out in white. 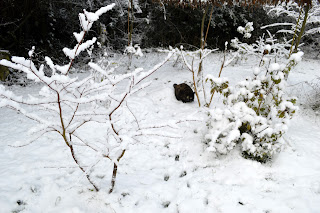 The Four Sisters are comfortable in their blanket of snow and are accompanied by Esme, who was having great fun chasing up and down the garden as I took these photographs.  She seemed completely unconcerned by the snow even though this will be the first time she has encountered it. 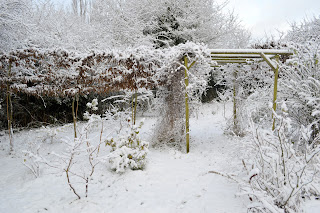 A step back shows the pleached hornbeams looking good in the snow and the now slightly less wonky pergola not looking too bad.  Here, again, the snow is hiding a lot. 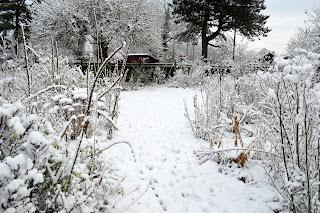 The Long Shoots remains one of my favourite parts of the garden.  I love this view of it in particular.  I never tidy up the borders very quickly and partly this in the hope of days like this, where the dead stems hold the snow and hopefully protect the hibernating insects (sadly slugs too, but we cannot pick and choose these things). 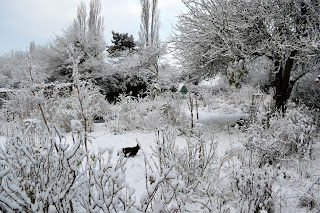 Whilst I know that this snow is not going to help the already saturated soil, I can pause for a moment: watch the little brown cat, and enjoy this snowy day. 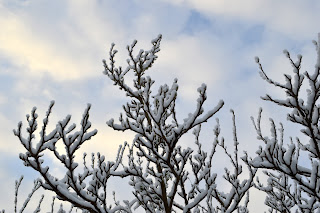 I then decided that my hands were freezing and my feet were going the same way. One final look up to appreciate this cold day and it was time to go indoors.
cypress tree Katsura Tree snow