I often have a look back on my End of Month Reviews to see what was happening at the same point in previous years.  I now have an archive to look back on and it is, well I think anyway, quite interesting.

"So 2012 has finished its turn and the end is truly in sight for it.  The minutes are ticking away inexorably to the tolling of the bell that means a year ends and a new one begins.
December 2012, how shall you be remembered?  What is that word I am thinking of, that simple small word that sums you up pretty neatly, oh I know: wet.  December 2012 has been wet."

and to demonstrate this I included this photo: 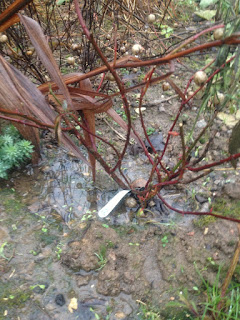 The soil in my garden is mainly heavy clay, but puddling like this is rare.  Even with the current amount of rain fall I have not seen puddling like this yet (I think I have to add the word yet).  This could be though because the soil has been dug a few times since 2012 and improved so maybe that has helped.

"December is ending cold and stormy, it has been a stormy month.  We are lucky here living in the mainly sheltered midlands so whilst it has been a bit scary at times, the worst of the storms have so far passed us by.  I have taken these photographs a couple of days early as more storms are due.

Today it is frosty." 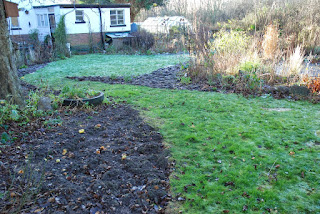 and it does look cold!  The Burtonequse Curl was new at this point and it remains an addition that I am very pleased with.  I still look at the shape and it pleases me.  I think this was the last major change I made to the garden, which makes me itchy just contemplating that.  It must be time for something new.

"2014 is ending as cold and frosty.  The last few days has seen deep overnight frosts and even a smattering of snow on Boxing Day.  I decided this time to take the photos for this post whilst it was still frosty rather than wait for a thaw." 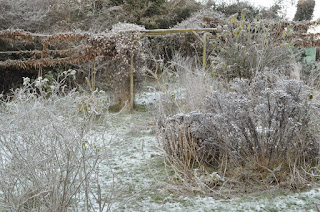 It was a very cold new year, very different to this year.  The frost lasted quite a while and let to a rather late Spring.  This year Spring feels like it is almost upon us already as snowdrops and Spring shrubs have started flowering.  I'm a little concerned that there will be less to flower when the time arrives that they usually would.

"December is going out on a rainy and stormy note.  It feels like it has rained, at least a little and often a lot, every day for some  time.  I took these photographs on a rare sunny day as I knew that the next day was forecast rain and storm (Storm Frank) so I most likely would not want to go outside." 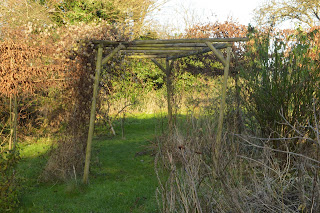 We are back to wet and rainy, the garden looks remarkably green still but yes, the pergola has now a bit of a lean to it.

I wonder what the new year will bring.....
End of month review End of month view garden archive