The last Saturday before Christmas they have been holding a local food fair. Last year when I went I bought cheese and fudge but missed out on the rather nice looking crisps as they sold out fast.  This year we went with a strategy in mind to buy when we saw things rather than waiting and thinking.  This worked well, I came away with cheese, fudge, crisps and a thing that I can't remember the same of but it was a ball of mushrooms and taleggio baked in breadcrumbs.  This is stage one of the tradition.

Stage two involves a nearby garden centre.  We have a wander around this garden centre as they sell a good selection of winter plants (we never seem to go any other time of year).  This year we admired the camellias that were heavy in bud. We also had a good look at a viburnum or two and some hellebores.  We then go into the houseplant section.  Neither of us are confirmed house plant buyers (though as I say this I look left into the conservatory and wonder if this is really true).  We wander around and look at the plants and invariably start to giggle. 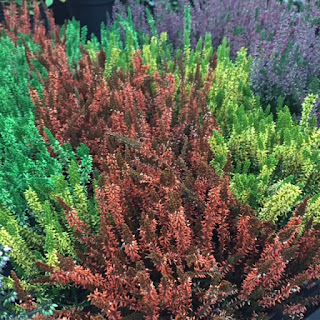 The gawdy heather always makes us pause.  I am absolutely no-where near the top of the good taste league, but I find these rather disturbing.

Then there are these plants: 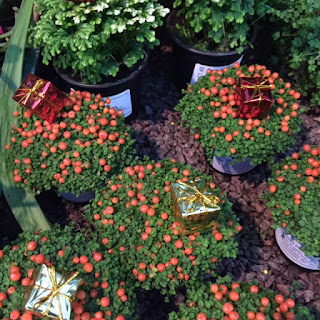 that for some reason have a tiny parcel stuck to them. 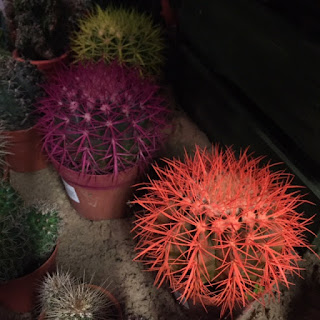 brightly coloured cactii.  This is a dark photograph, if I had made it lighter it would have been a bit too much I think. 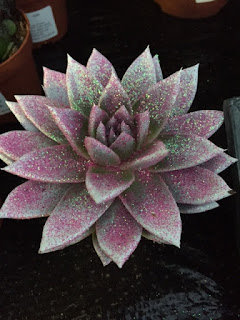 which we suspected also glows in the dark.  What did this poor plant do to deserve being covered in glitter?  Seriously - the poor thing, surely it was beautiful enough which this treatment?

Then we stopped and stared a lot. 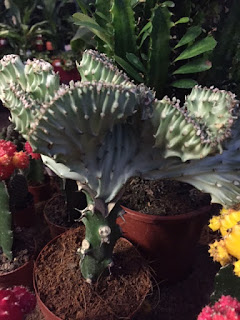 Can you see the join?  We had to walk around this plant as we thought it must be grafted, after further inspection we were not sure if calling it grafting was accurate.

But, there is a but, as these are just a few plants in a rather large building.  Whilst it is easy to poke fun I did, of course, find a plant I had to buy.  Every year I do and every year they have been good plants that have thrived.  So this year I bought.... 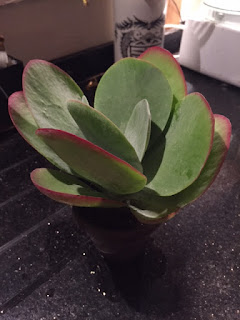 this rather fine Kalanchoe, not bad for a fiver I thought.

So there is the tradition, go and buy food then wander into the garden centre and chuckle at a novelty plant or two and then buy something rather nice.
christmas tradition heathers kalanchoe painted heather