November 05, 2015
There are consquences from visiting the Garden Literary Festival, 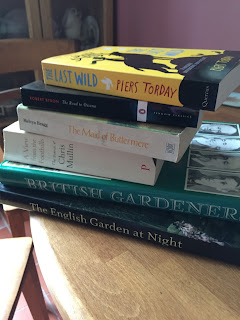 a rather large pile of books.  Most of which were not the subject of any of the talks, but were mentioned by various speakers during the course of the weekend.

I'm sitting there, listening happily, and a book is mentioned.  Oh that sounds interesting I think and look it up.  I then make a note of it.  A little later another book is mentioned, the same thing happens again.  The picture above is what happens next, I appear to have bought a few and still have a few that I had to make wait until another payday had been.

Not all were mentioned at the weekend, one I happened across in the book shop at Hatfield House, but it was sealed so that it could not be flipped through.  I understand why this happens as it does protect the book from being over-perused, but it did mean that I could not decide whether I wanted it or not.  I was curious enough to buy a second hand copy from a well known internet book seller, but I would not have risked the full price.

One book though I have to give special mention to.  Its called British Gardeners, A Biographical Dictionary'.  I had never heard of this book and again I had to make a second hand purchase.  It arrived and after moment of quickly looking at what I had bought I realised I had a purchased a real gem.  It contains pretty much every gardener you can think of and many that I could not have thought of as I did not know of them. 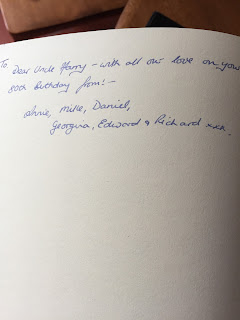 Even better was that it contained a dedication, I just love books with a dedication.  I was only sorry that there was not a date to go with it but I do hope Uncle Harry loved this book as much as I do.