November 22, 2015
Pardon I hear you say, Coronation Street gardens?  Yes indeedy, I recently went on the Coronation Street tour and part of what made this exciting was the chance to wander around the gardens.  I have been watching Corrie since before I can remember, it has always been there in my life from when I was very small to now where it is now an ingrained habit.  I do not watch any other soaps (though I have flirted with others in the past), Corrie is the one I will not miss. 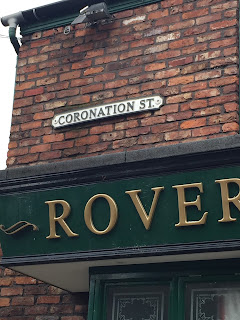 Hang on though, you say, are there a lot of gardens?  Well, it turned out to be more interesting than I expected in that regard. 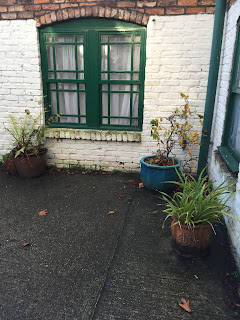 The yard behind the Rovers contains a few scratty looking containers.  It is November and this specific set has not been used since 2013 so a bit of scratty is allowed.  I thought it was realistic scratty really. 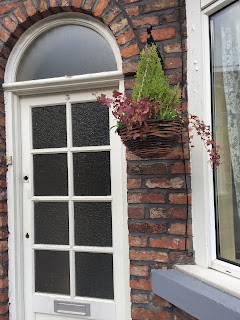 Emily has her hanging basket. 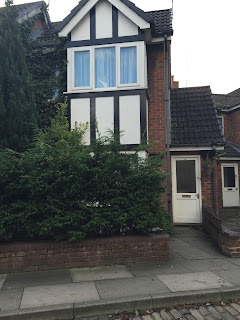 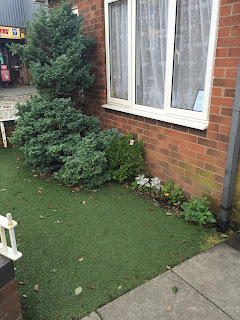 Sally has a few real plants, but, horror of horrors!  fake grass!  Yes, who would have thought it that on a television set where people probably walk all over these things all the time they would use fake grass. 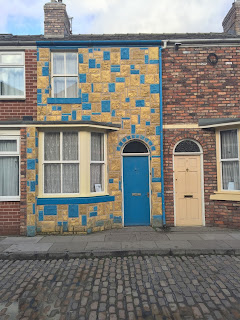 The back yards behind the houses are tiny and most do not really contain any plants, but do not under-estimate how bright this cladding is.  You almost do not need flowers when you have something this bright (almost...). 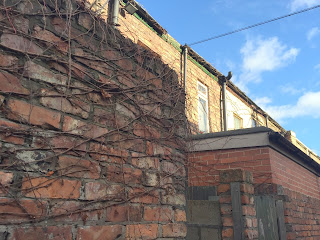 On our wanderings we decided we had never really seen this part of the set, these are the houses behind Coronation Street, the ones that back on to the pub, the Barlows etc; the other side of the ginnel behind the houses. 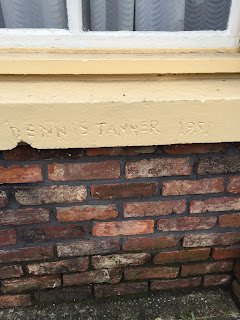 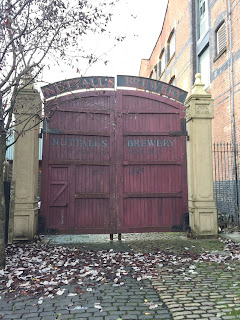 and we stood in front of the Nuttall's Brewery gates, used a couple of times in the story but not seen recently.  They are impressive gates and we wondered where the gate posts had originally come from. 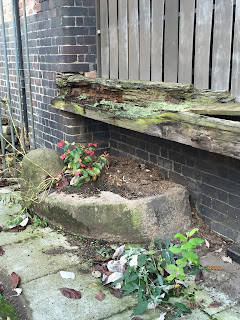 This planter was beside the gates, a little unloved but it is November and they are demolishing all this soon. 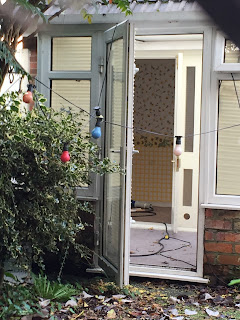 We then wandered behind Sally's house and the other 'newer' houses on the other side of the street.  The abandonment of the houses was clear. 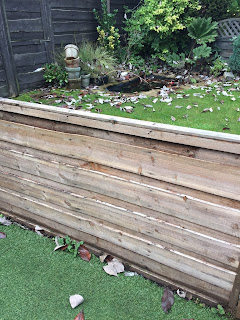 The Platts have artificial grass, but next door where the Nazirs now live has a real garden.  It has grass and a pond.  I remembered the pond from a brief story line.  There is good planting around the pond, it has a rather nice gunnera. 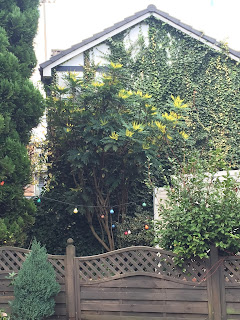 Sally however wins the best garden plant.  Look at this mahonia - isn't it fantastic?  It's wonderful what a couple of years of neglect can do and this is a great plant.  On saying that I've neglected the one at the top of my garden since 2007 and it looks nothing like this.

It was a cold damp November day when we visited and we loved every minute of it, if you get the chance to go do.
Coronation Street Coronation Street Tour Corrie Corrie Tour Denis Tanner Rovers Return