October 18, 2015
Michael Perry is Thompson and Morgan's New Product Development Manager and as he describes himself, a modern day plant hunter. I have met Michael several times and he has even visited my garden as part of the plant trials that I do for Thompson and Morgan.   Michael is also a committed fundraiser for the Alzheimer's Society and for Perennial.  Michael is currently asking people to donate to vote as to whether he shaves off or keeps his beard in a fundraising campaign for the Alzheimer's Society.   https://www.justgiving.com/shavethefur/  www.justgiving.com/keepthefur

Michael's adventures in order to raise money have led him on treks across the desert, founding the Grubby Gardeners who started off doing muddy obstacle races and then progressed to naked calendars (as you do).  I decided not to use a naked photo of Michael though for this blog, I chose one  instead from when I visited the Thompson and Morgan show garden at Jimmy's Farm. 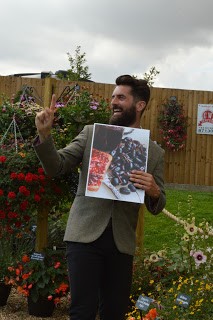