October 21, 2015
Yes, to celebrate Back to the Future Day, of course I am going to write something, I am not the sort to let such an opportunity pass.   In Back to the Future 2 the future they go back to is the 21st October 2015.  Many articles are being written about what was correctly predicted and what was not, but lets face it, none of them have a mobile phone.  It is now possibly hard to imagine that in 1989 when the film was released, it was hard to imagine that there would be the widespread use of mobile phones.

Anyhoo, writing about Back to the Future in a gardening blog did give me a bit of a challenge as there is not a lot of gardening in any of the films.  Then I remembered the pine tree(s).  In the first film Marty sets off from the Twin Pines Mall car park.  He returns to the Lone Pine Mall car park.  When Marty arrives in the past he has to escape a farmer and in doing so he runs over one of the baby twin pines killing it and thus changing the landscape of the future. 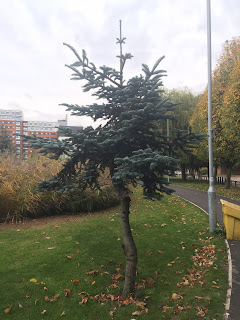 I had a bit of a conifer moment myself the other day.  I have stated previously my dislike of conifers, and in general this remains.  It turns out though I rather like a good pine and I saw this blue pine tree the other day and got a little attached to it.  I had to take a photograph much to the amusement of passers by who could not see the attraction.  It is rather a rubbish photograph I admit, particularly as you do not get a sense of how wonderfully blue this tree is.  It was a grey misty sort of day which is my excuse for bad photography.  This lone pine (it is not actually lone at all, there are about five of them lining the path) is rather fine.

Please note, I had a notion that I would finish this by writing something about the Terminator series and the various dates and years referred to in that franchise.  I was defeated in this objective as after looking at the films I thought I knew well I just got completely lost at plot twists and re-written timelines and gave up.  I just hold on to the thought of time travel as being timey-wimey and leave it as that.