August 02, 2015
I have arrived at my last breakfast with Toby,  I shall miss his soothing tones on a Sunday morning.   This week is called 'Art, Craft, Nature and Modernism' and starts from 1840 looking at the Italianate style for houses and gardens.  Toby then talks us through the bedding revolution and how it was the sign of wealth and it appears to me, a bit of bling. 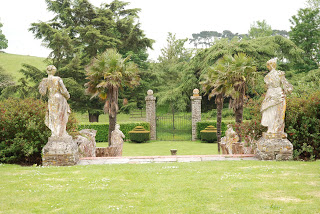 We then move into the rise of exotic looking bedding planting.  At this mid-19th century point there was the development of the large glasshouses in which to house these exotic finds, brought back at great expense and some risk by plant hunters.  Toby goes on to tell us about the head gardeners who looked after these precious plants and how they developed hot houses and regimes to keep these plants alive and preferably flowering.

We look at Paxton and move on to Bateman of Biddulph Grange.  We particularly look at how art and nature can co-exist.  Both Chatsworth (where Paxton was based) and Bateman developed highly formal planting alongside naturalistic gardens.  The reaction to this was the work typified and led by William Robinson, who wanted less formality and more plants and gardening than overtly controlled spaces.  Toby calls this a battle of architect vs gardener.  It can be no surprise then that we swiftly move on to discuss the partnership of  Edward Lutyens (architect) and Gertrude Jekyll (garden designer)  (yes a woman, at last!). 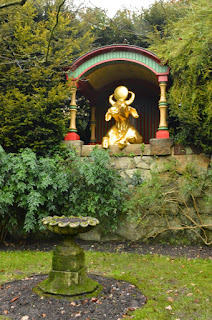 The period comes to a pause for the First World War, a time a great change particularly with the loss of so many men.  This hit many of the stately home gardens hard.  They lost so many of their male staff and their sons and heirs.  Life was never to be the same again.

The inter-war period is one of the rise of the middle-classes, modernism and also the development of Sissinghurst.  Gardens in Britain did not take on the call of modernism as such, we are shown the gardens of Tunnard that surround Bentley Wood, which simplified and stripped back the landscape.

After the Second World War modernism appeared but more overseas than in Britain.  We look at the work of Burle-Marx.  The Festival of Britain in 1951 brought modernist planting to Britain at a time when people were more receptive to it.  The easy, less maintenance, style appealed particularly to the middle-classes who were working all week, had more disposable income and had precious weekend time.

The course ends with Toby saying "gardens are for individuals, we should take our inspiration from where-ever and whenever we want and do whatever we want" which I think is a good thought.

I have thoroughly enjoyed the course, it has told me things I did not know and added knowledge to areas where I did.  The sessions are only thirty minutes and cover a lot of information, this inevitably means that there are some areas where you are left wanting to know more and go off and explore for yourself.  I like this very much.  Toby talks with quiet authority, he clearly knows and loves this subject.  What has been the end result of me taking part in this course?  I now want to do another one.