July 05, 2015
Chris Collins is a familiar face from television.  I think the first time I remember seeing him was on Gardeners' World when he was the Head Gardener at Westminster Abbey.  Later Chris did a very good series called The Plantsman that I watched avidly.  For many children he is known as the Blue Peter gardener, a role he had until 2013.  Chris has just designed, along with Oli Blanc and Charlotte Salt, the Bronze Medal winning Henri le Worm Community Garden for the Hampton Court Flower Show.  This garden is designed to promote an app that is aimed at linking to the National Curriculum and encouraging children into growing food, nature and gardening. 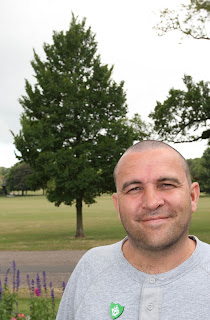