July 02, 2015
A new exhibition opened on the 27th June at Compton Verney to celebrate the 'Arts and Crafts House, Then and Now'.  This is a major exhibition including many items from the Arts and Crafts period.  I was lucky enough to receive an invitation to the press launch and spent a very enjoyable day being shown around the exhibits.  I admit that my primary reason for wanting to go was the promise of a tour around the William Morris inspired meadow by its designer, Dan Pearson.  It was an opportunity I did not want to miss. 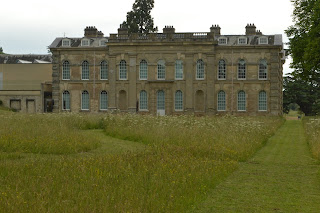 Before I get to that though, the exhibition itself is worthy of visit.  The focus is on 'the house', so you can see design drawings for The Red House, the house Philip Webb designed for William and Jane Morris.  There is embroidery on display by May Morris and others.  There are designs and pictures of work by Charles Francis Anneseley Voysey.  There are also the designs for Stoneywell, a cottage I visited not so long ago and it was very interesting to see the plans with the planting for the thickets laid out. 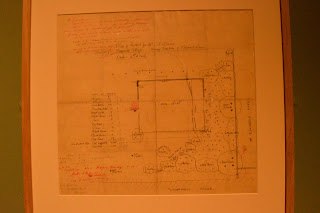 It was also really interesting to see some of the furniture that was originally in the cottage such as this huge settle, the scale of which you cannot tell from this photograph but it is a good 6 foot high and just speaks of 'solid'.  It is the most amazing piece of furniture. 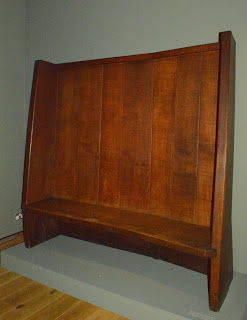 There are lots of objects and textiles both old and new in the exhibition, plus a fascinating silver exhibition.  Well it was fascinating to me as silver making is not something I am very knowledgeable about and I was very interested to see the incredibly beautiful design drawings of some of the pieces and then the pieces themselves.  The exhibition turns around the Hart family who are still making silver-ware today in the same way that generations before have done so.

The exhibition is about then and now, so there are contemporary pieces alongside the old.  There were photographs of Munstead Wood, taken by Gertrude Jekyll herself as she crafted this garden around her home.  There was also photographs old and new of Folly Farm, a Lutyens/Jekyll collaboration updated and revamped by Dan Pearson 2009-13.  The exhibition is skillfully put together and it was interesting to be able to meet and talk with the curator Antonia Harrison.

The main event for me though was the Dan Pearson meadow, that was what I had really gone to see.  The meadow was originally crowd funded last year to help get it going.  Compton Verney relies on its subscribers and visitors so to make this happen additional funding had to be found.  Dan Pearson is a bit 'the man of the moment' fresh from his Best in Show and gold medal at this year's RHS Chelsea Flower Show.  Of course a meadow does not appear overnight, it was planted out last October where there were the beginnings of a wild flower meadow already in progress.  The area was de-thatched and then the seed mix was applied into the layout that had been decided. 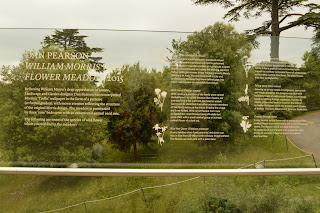 The meadow is based upon the 'Trellis' wallpaper design of William Morris.  This was the first wallpaper that Morris designed and was based on a rose trellis at this home in Bexleyheath.  When walking around the meadow it is quite hard to see this, but there is a terrace where the design is more easy to see. 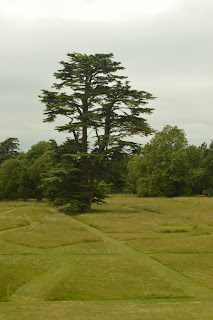 Within the meadow there are circles of specific planting that are to represent the roses in the original wallpaper design.  These are not flowering yet, but in a couple of weeks it should look really good. 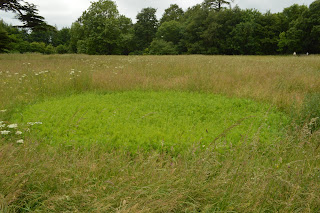 The meadow was helped by the addition of yellow-rattle into the seed mix.  This is a parasitical plant that helps reduce the vigour of the grasses and allows the other planting to come through.  This is a tried and trusted method used by many meadow-growers. 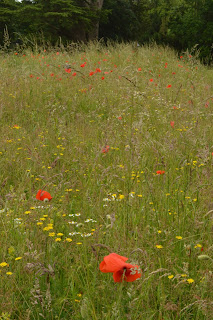 Dan explained that the meadow will evolve and develop, next year it will contain more daisies, then the year after other plants will gain dominancy with orchids (hopefully) arriving around year seven.  By this time the meadow will have stabilised and change less.  The meadow will be treated as a hay meadow, mowed in the Autumn and grazed over the Winter.  In future years it can continue to be a key part of new exhibits as it can be mown into new designs. 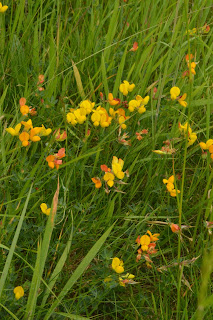 Dan led the tour of the meadow explaining that Compton Verney was a huge landscape but with limited resources.  He wanted to design something that would encourage people to go outside.  A key part of the Arts and Crafts movement was the connection between art and nature so it felt in tune with the ethos of the period. 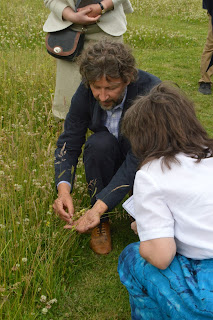 Very importantly the meadow is already making a significant difference to the ecology of the Park.  Already the amount of bees and butterflies has increased.  This again is in accord with the ethos of the Arts and Crafts movement, it is beautiful and it is useful. 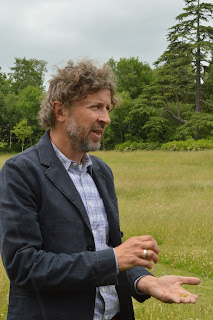 Dan was clearly seeing himself as carrying on in the tradition of the Arts and Crafts Movement.  I was very interested in his suggestion that he would love someone to weave a tapestry of his meadow, so taking the art in full circle: from the original wallpaper design, to the growing meadow, to a piece of tapestry.  What an interesting idea this is and how wonderful if would be if someone took him up on this.

I had a really nice day at Compton Verney and realised very quickly I did not have enough time to see everything I would like to.  I predict a return visit.
Compton Verney Dan Pearson Gimson Philip Webb Stoneywell Voysey William Morris