Farewell to a cat called Lawrence

April 28, 2015
Way back when in September 1999 I accidentally read an article in the local newspaper that some kittens had been dumped in a plastic bag in the local Safeway car park.  It was a timely reading as at the time I had been considering getting a new kitten as one of my cats was getting very elderly and I did not think she had much time left.  My children were quite young at the time and I thought it would help them with the passing of the elderly cat who I had had since before they were born.  So, cat carrier at the ready we went to the local cattery where the kittens were being cared for and picked a tiny black kitten as I have always had a fondness for black cats.  This left a splodgy kitten on its own, well it didn’t as you will not be surprised that they both ended up coming home with us.  The black kitten we named Lawrence after Lawrence Llewellyn-Bowen (it was the shiny dark mane they had in common) and the splodgy one was named Austin after Austin Powers.  (We later discovered Austin was in fact a girl but she has remained Austin to this day). 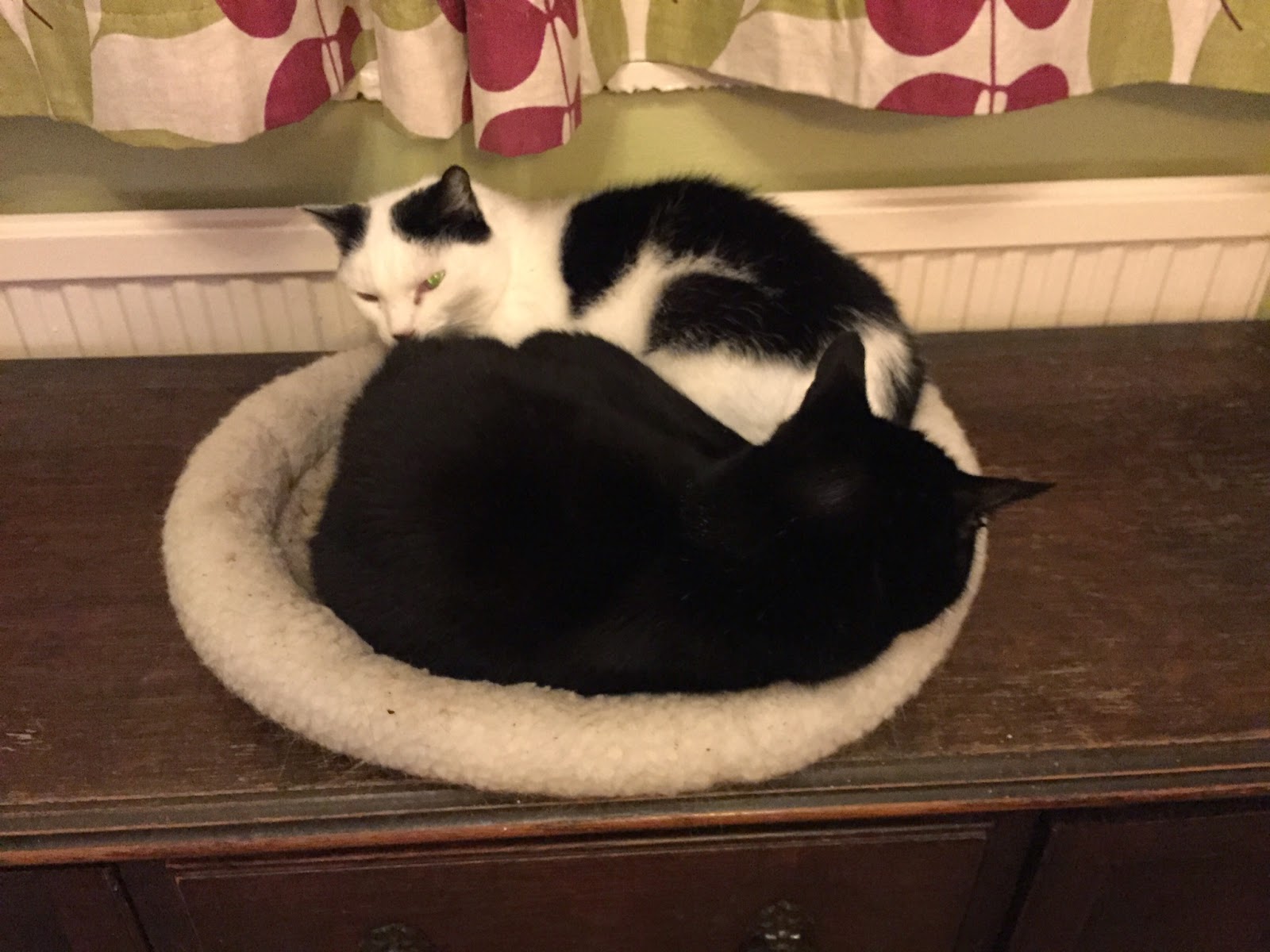 They were tiny and they hid well.  Rarely have I known cats that could be so invisible as these two.  At one point we thought they had escaped but food kept being eaten so we were fairly sure they were in the house.  It turned out they were living in the gap under the fridge.  Eventually they became bolder and settled in properly to living with us.  We moved house and they settled into their new home quite well.  I had four cats in total at this point, the kittens (as they were usually referred to) Geoffrey and Emily.  Sadly Emily did not last very long after the move and the kittens generally kept out of her way.  Austin fell in love with Geoffrey and pretty much ignored Lawrence from that moment on.  Poor Lawrence, always on the outside looking in, he just wanted a friend.

When a few years later I moved again, Austin decided she needed Lawrence again, they resumed hiding and lived in the back garden until the first frosts descended.  To add insult to injury I moved again within twelve months but Lawrence had had enough of outside living by this point and moved into the conservatory to sulk.  Austin’s affections returned to Geoffrey and Lawrence was again excluded.

Lawrence did have a friend in Chesney, the mad kitten who lived with us briefly.  This was rather sweet and I was happy for him in his otherwise lonesome life.  I cannot say he is exactly friends with Bruce, but he did spend the last year being Bruce’s mentor.  Bruce soon realised that if Lawrence was hanging around in the kitchen that probably meant I was cutting up meat or something else they might want a piece of.  Lawrence also taught Bruce where the best mousing spots are in the garden.  It was lovely to watch this relationship which was almost paternal; I think that Lawrence taught Bruce how to be a household cat after his time spent as a stray.

Of course recently Esme has moved into the household and Lawrence was very laid-back about this.  He took one look at Esme, shrugged as if ‘oh look another one’ and went back to sleep.

Lawrence was quite an outdoors cat all his life.  He liked weather, all weather, he collected it assiduously.  He would bring in the heat of the sun and the sogginess of the rain.  We used to call him the weather-cat as he always liked to keep us informed of outdoor conditions.

He was also an accomplished hunter, all of my other cats have always been rather lazy in this regard which is no bad thing in my view.  Lawrence though liked to hunt and in particular mice and shrews.  He would eat almost every bit of them.  I would find the odd foot or tail, sometimes a piece of head but most often a smear.  Since moving to this house, where mice are plentiful, he took up his killing skills to a new level.  Thankfully he rarely went after birds so I admit I encouraged his anti-vermin ways.  My daughter once commented he started life as a weather forecaster and ended up a serial killer, slightly harsh and yet with a ring of truth. 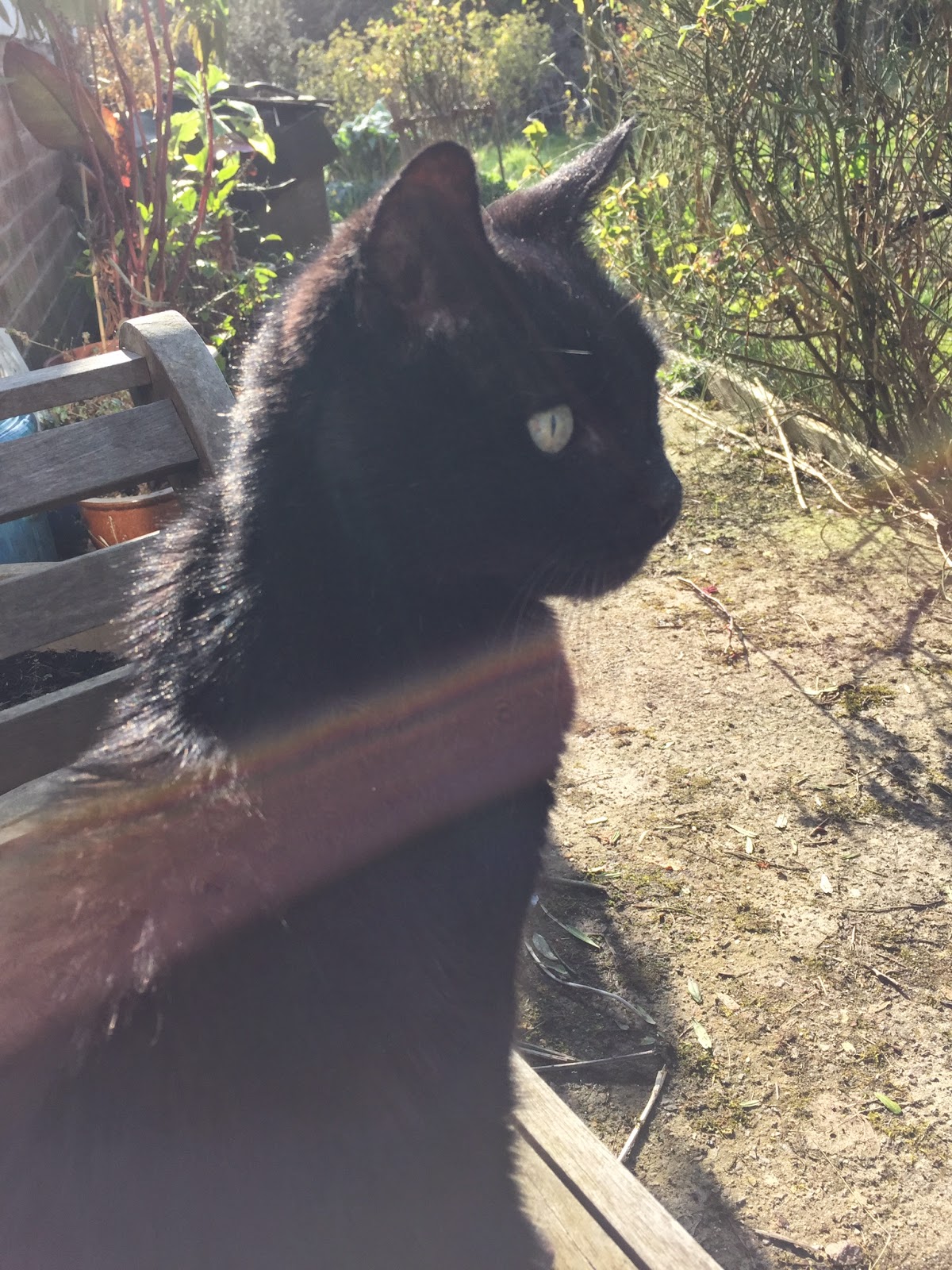 Sadly though over the last few weeks I noticed a decline in his health.  He became rather thin rather quickly and then I realised he had a large lump developing under his jaw.  The vet was very clear with me that this was not something he would recover from and that he was probably in pain so I had to let him go to the big cattery in the sky.  He had had a good sixteen years and I could not bear to think of him in pain.  I think Lawrence really has gone to the big mousery in the sky, his happy hunting grounds.  So farewell Lawrence oh my Lawrence,  I miss you hugely and Austin is missing you more than she can say.  Bruce says so long and thanks for all the mice.