The writing of the lists 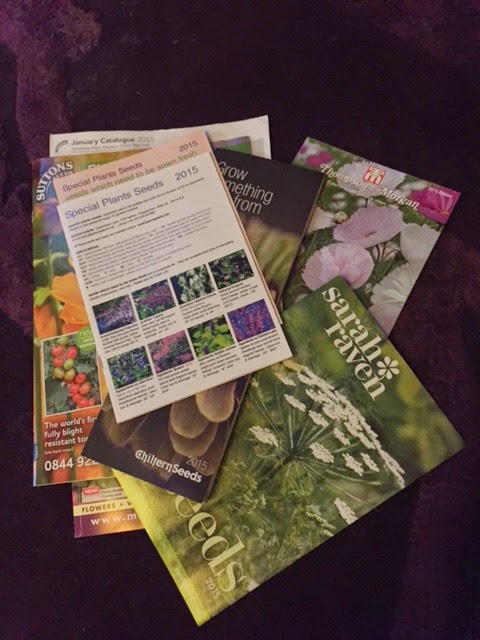 It is the time of year to be staring longingly at seed catalogues, making lists and over buying.  Yes the depth of winter is the perfect time to be spending those non-gardening hours pondering the plantings yet to come.

I am someone who loves to order on-line yet but for some reason my seed buying involves very paper-based preparations.  Well, some paper based some not so.

My seed list collation is an all-year thing.  I keep a list in my phone of plants I have seen and I want to grow.  I keep the list so that when seed buying time comes I can look back on it, dismiss half of it as pure fantasy and buy the odd few that still make it to the final cut.  A good example of such a plant this year is Clary Sage.  I have been aware of Clary Sage as a name for many years but not actually very aware of it as a plant as a real thing in a real border.  One day last summer whilst visiting a garden I saw this plant, I recognised it as a sage of some sort but did not know its name.  Clary Sage I was informed and I was immediately taken with it.  Onto the seed list it went so I could research it and buy as appropriate.  I am waiting for my delivery of said seeds.

Then there is the receiving of the catalogues which is itself exciting.  These arrive in waves over the Christmas break.  These have to be inspected in turn, looking for the usual seeds I buy but also with an eye out for the unusual.  Lists are made, compared and the cheapest seeds are bought from the reliable sources.  I have bought (stupidly) from unreliable sources in the past and funnily enough, the seeds are unreliable.  My most unreliable purchase last year were my echium seeds that germinated, grew and when they flowered they turned out to be Evening Primrose.  I was amused, but not impressed.  I think I might have finally learned my lesson on this one.

Finally there is the seed list from the previous year, as I write down what I have ordered and from whom every year.  This means I have a reminder of my old reliables plus the new recruits.  It also means that if I have a poor set of seeds from one company I can identify this easily and not buy from them again.

I say finally, but it is not finally at all because there is also the twitter aspect.  The photos of desirable plants that make you ask for the name and note it down so you can add to the list.  That happens quite a bit.

I said at the beginning of this post that winter is the best time to buy seeds, well I am going to temper that statement a little.  As the problem is if I receive the seeds in January I want to sow them.  Most of them will sit untouched until April/May, so really I prefer to spread my seed buying over a couple of months rather than rush into it.  So that is what I have done this year as not everything has been ordered yet, somethings are still in wishlist stage.  Then at least I will not be rushing to sow too early, hopefully.
seed buying seed catalogues seed lists