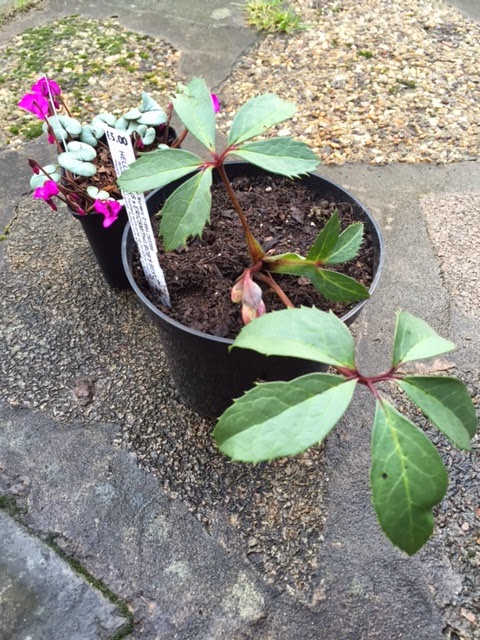 The other day I went to a talk at my local Hardy Plant Society meeting (well, I say local, I actually mean neighbouring county, but near enough), to listen to a talk by Julie Ritchie of Hoo House Nursery in Gloucestershire.  It was a good talk and a nice evening but it did involve plant sales.  I had noted a couple of things during the talk so wandered over to have a look what was available and came away with a small pot of Cyclamen coum 'Silver Leaf', which is now planted up at the top of the garden where the Wild Garden winds around the top boundary.  Every now and again I buy a pot of cyclamen as I would like to have lots.  I live in hope that the ants will do their job and spread some around.

My other purchase was a Helleborus x ericsmithii Bob's Best.  This hellebore is now planted in the Conservatory Border just this side of the cross-over point with the Spring Border.  It was going to go into the Spring Border which contains many hellebores but last year I started leaching a few hellebores into the neighbouring border to give an idea of drift.  I wanted more flow between areas.  I did spend a short amount of time musing about Bob's Best, I could not help but wonder if on the next shelf there is Bob's not quite as good, Bob's well it looks ok in a certain light and Bob's well at least he tried.

Next to be planted out were two purchases from Evolution Plants that arrived before Christmas, so these do not really count as being of the new year but they have not been planted out until now.  They sort of edge into the category.  First to go in was a Sanguinaria canadensis f.multiplex 'Plena' into the top of the garden not that far from the cyclamen.  The second purchase was an accident, a 'I'm still kicking myself' accident as I bought the wrong plant.  I bought the plant below the one I wanted to, I do not often make mistakes when online shopping but that day I did.  Foolishly I compounded the error by not checking the order confirmation properly either so when I did have a chance to rectify my mistake, I missed it.  Damn, damn, damn.  So I had a Ligusticum lucidum to plant out.  I even had to google to find out what it was.  Yes I probably could have sent it back but it was not worth the effort and it was my fault.  So, into the Coal Bunker Border it went and maybe I will grow to love it, or it will end up in the compost heap at some point, time will tell.  Oh and yes, of course I have now ordered the plant I actually wanted, it would have been foolish not to.

Meanwhile, not planted out and still waiting for inspiration to strike where it will go, is a Chimonanthus praecox.  Bought as a whim and waiting for it to flower might be like waiting for my first quince, but I thought why not.