January 31, 2015
Here we are at the end of the first month of the year already.  January has been a strange month, it often feels rather long and yet this year in some ways it seems like it has flashed by quickly.  On saying that Christmas seems more than four weeks ago.

So, to the garden, well the driveway: 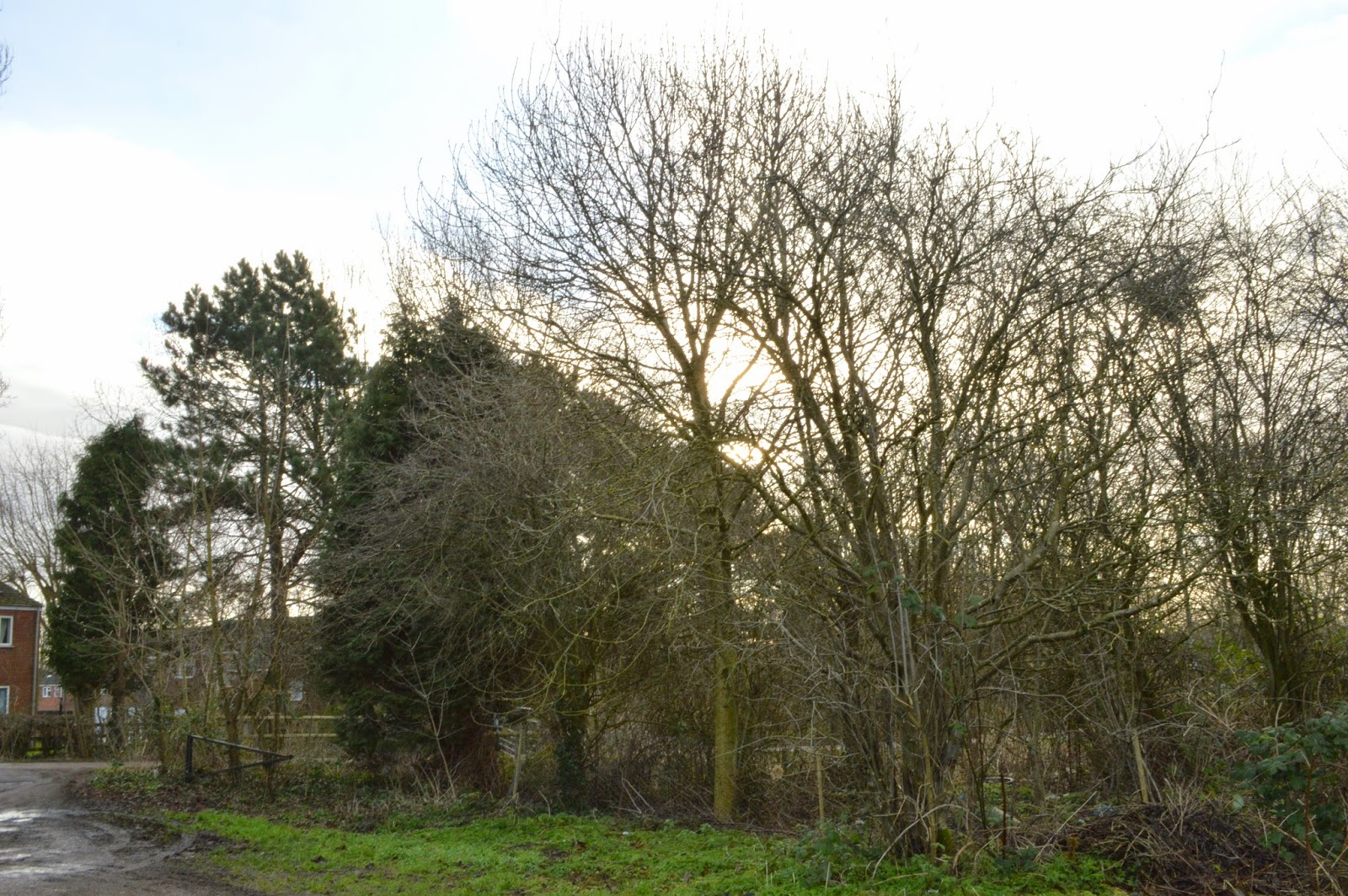 The driveway looks very wintery at the moment, the green is a mixture of grass, emerging cow parsley and moss. 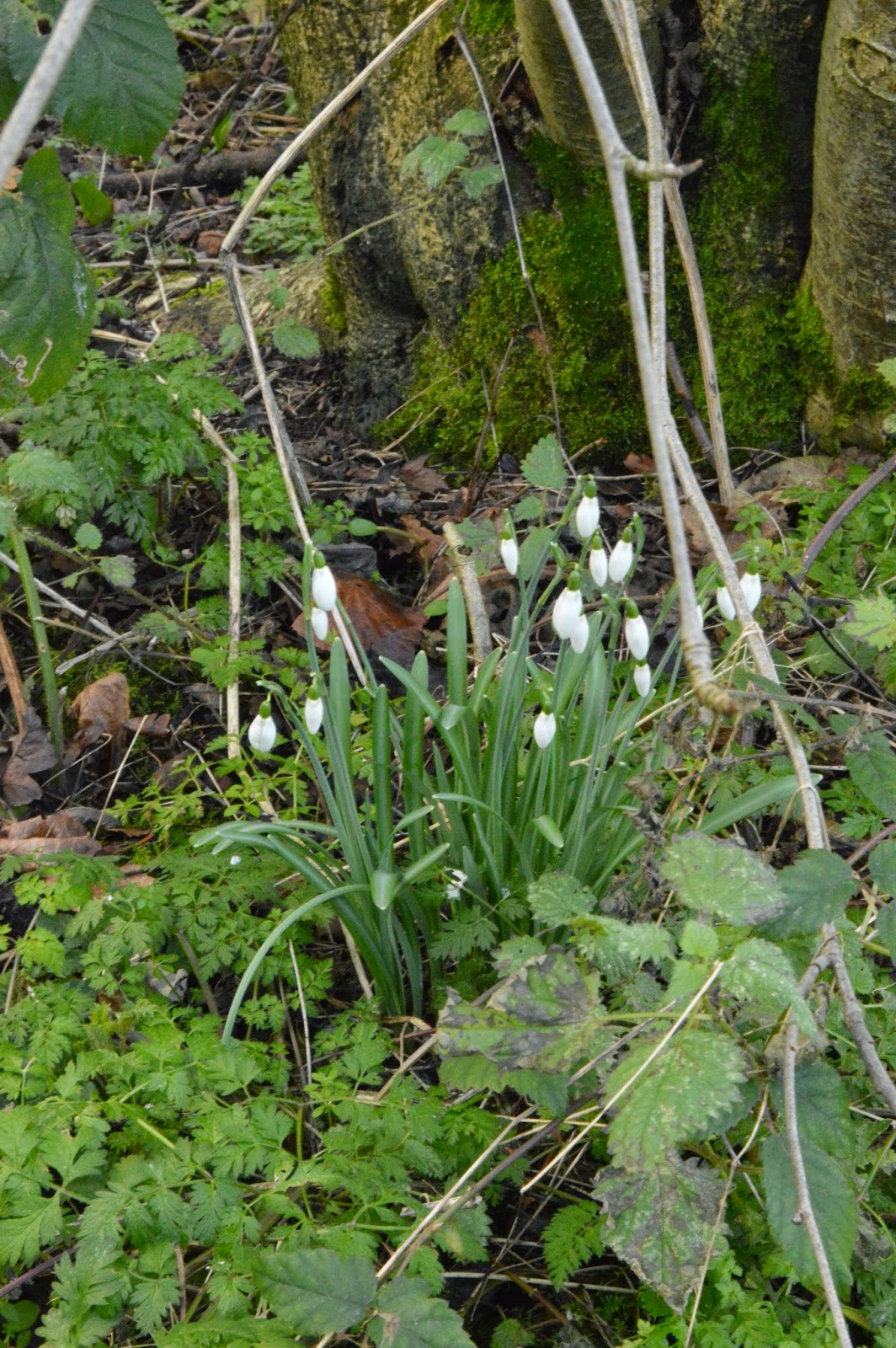 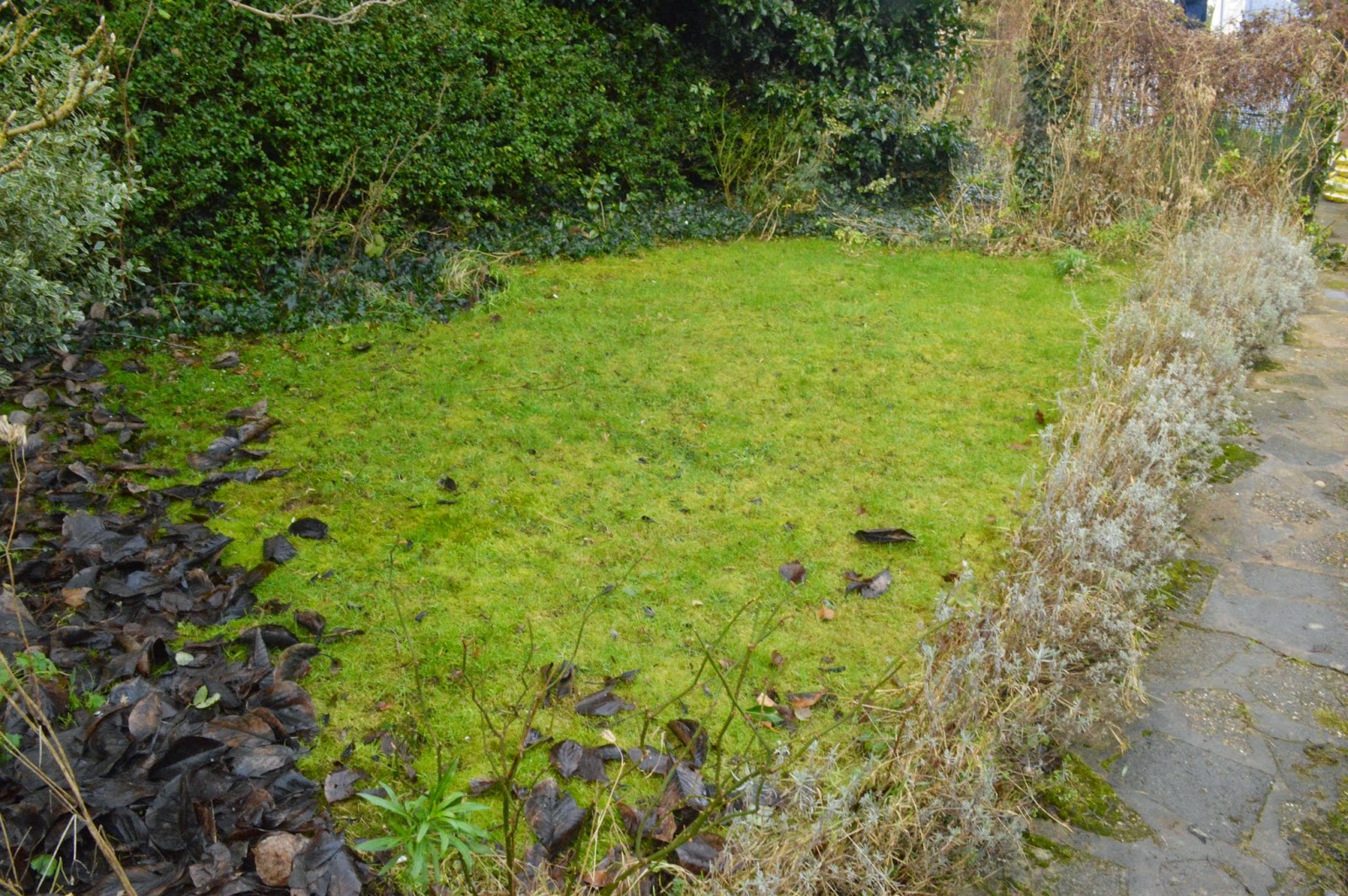 The Aconite Lawn is looking devoid of aconites.  I have suspicion that the acidic soil has eaten them.  My days of buying aconites are now officially over as they clearly will not grow here.  Its a shame but plenty of others things do so I will move on. 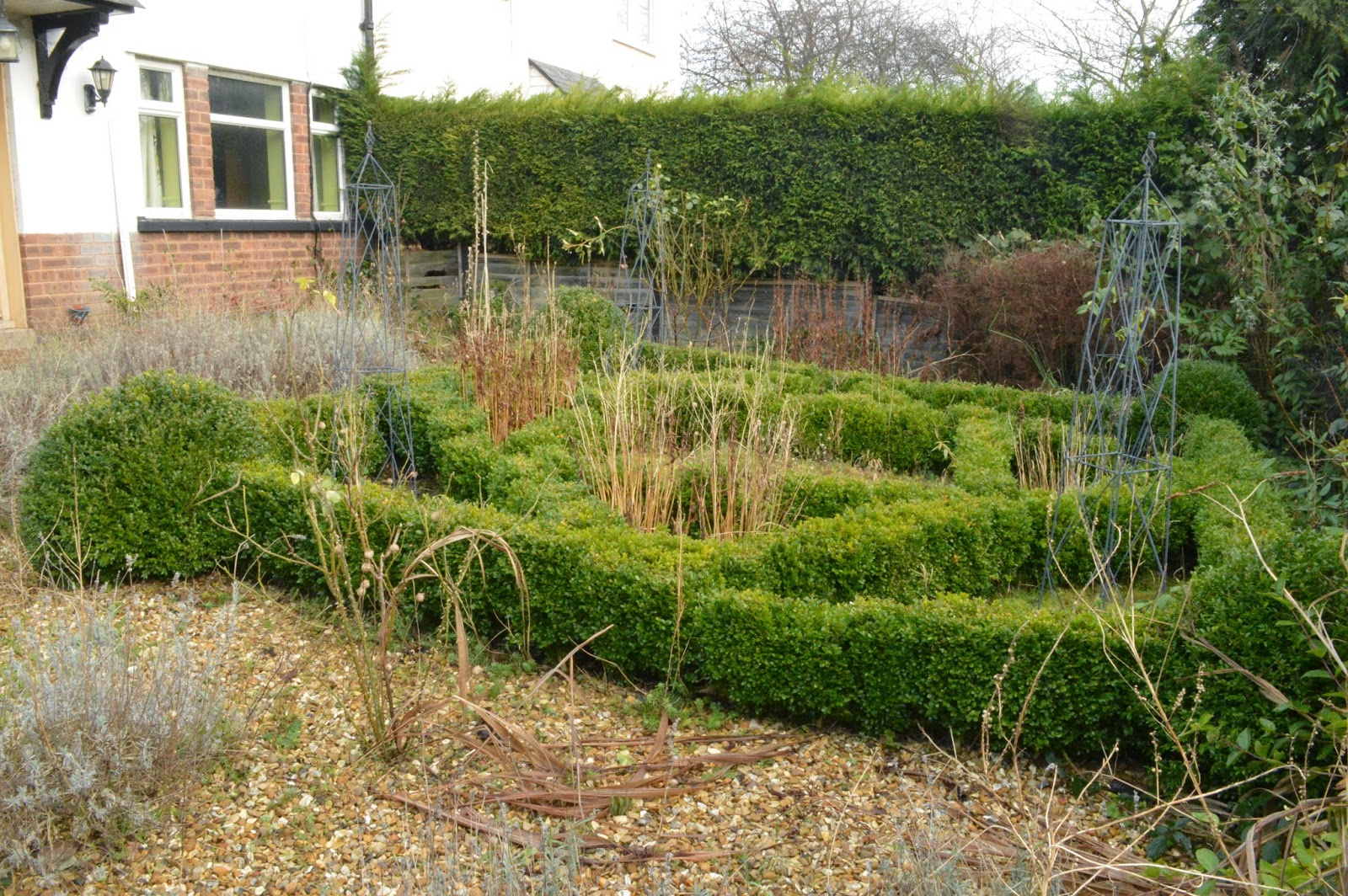 The Knot Garden is in need of some attention but is looking ok at the moment.  I am not displeased with it, I just know that it needs taking on another step now and that shall happen in the Spring. 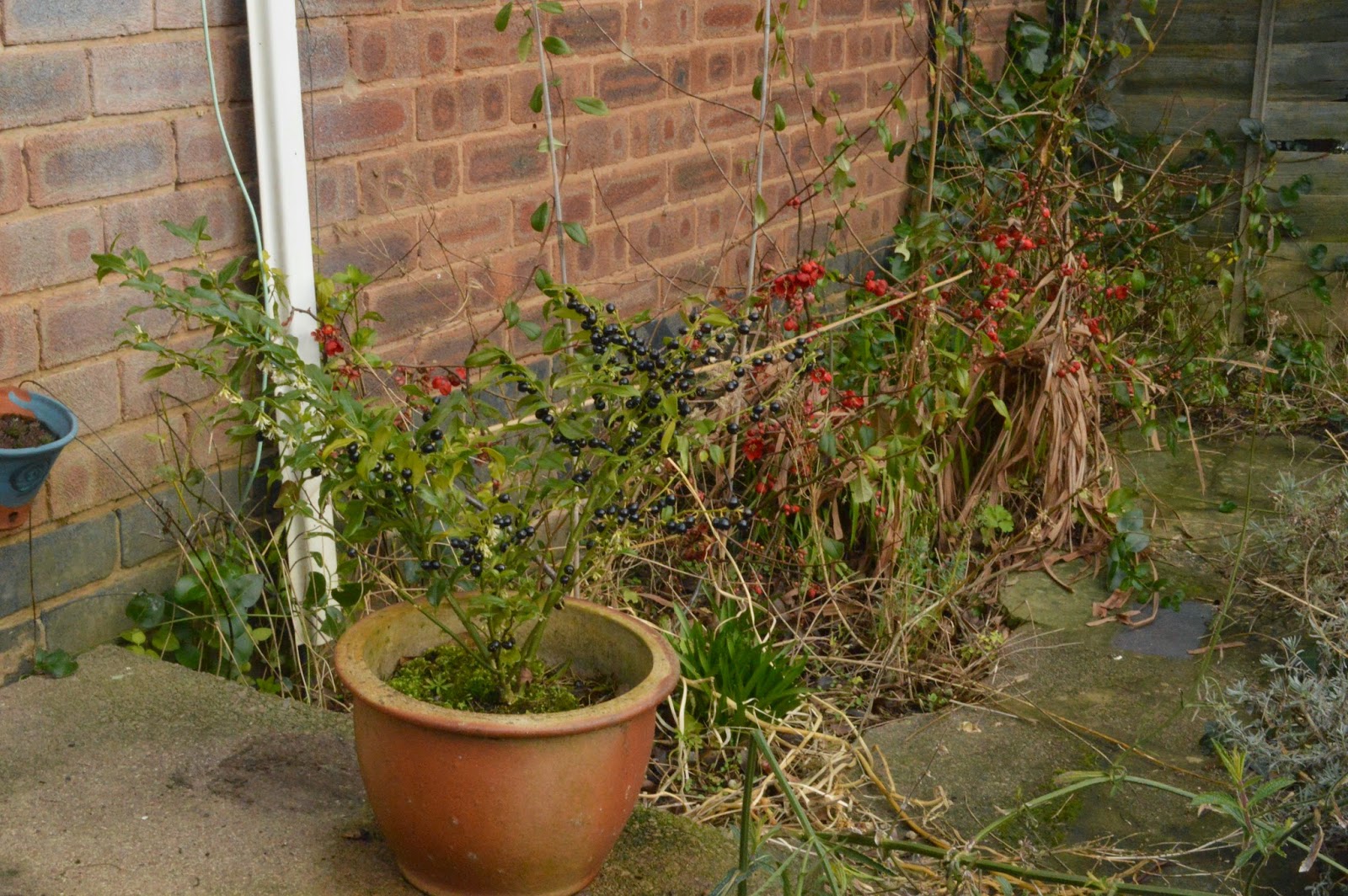 The Sarcocca by the front door is flowering away and smells divine.  The Quince Hedge has been flowering for weeks and makes me very happy.  I am waiting to see the first bee of the year on it. 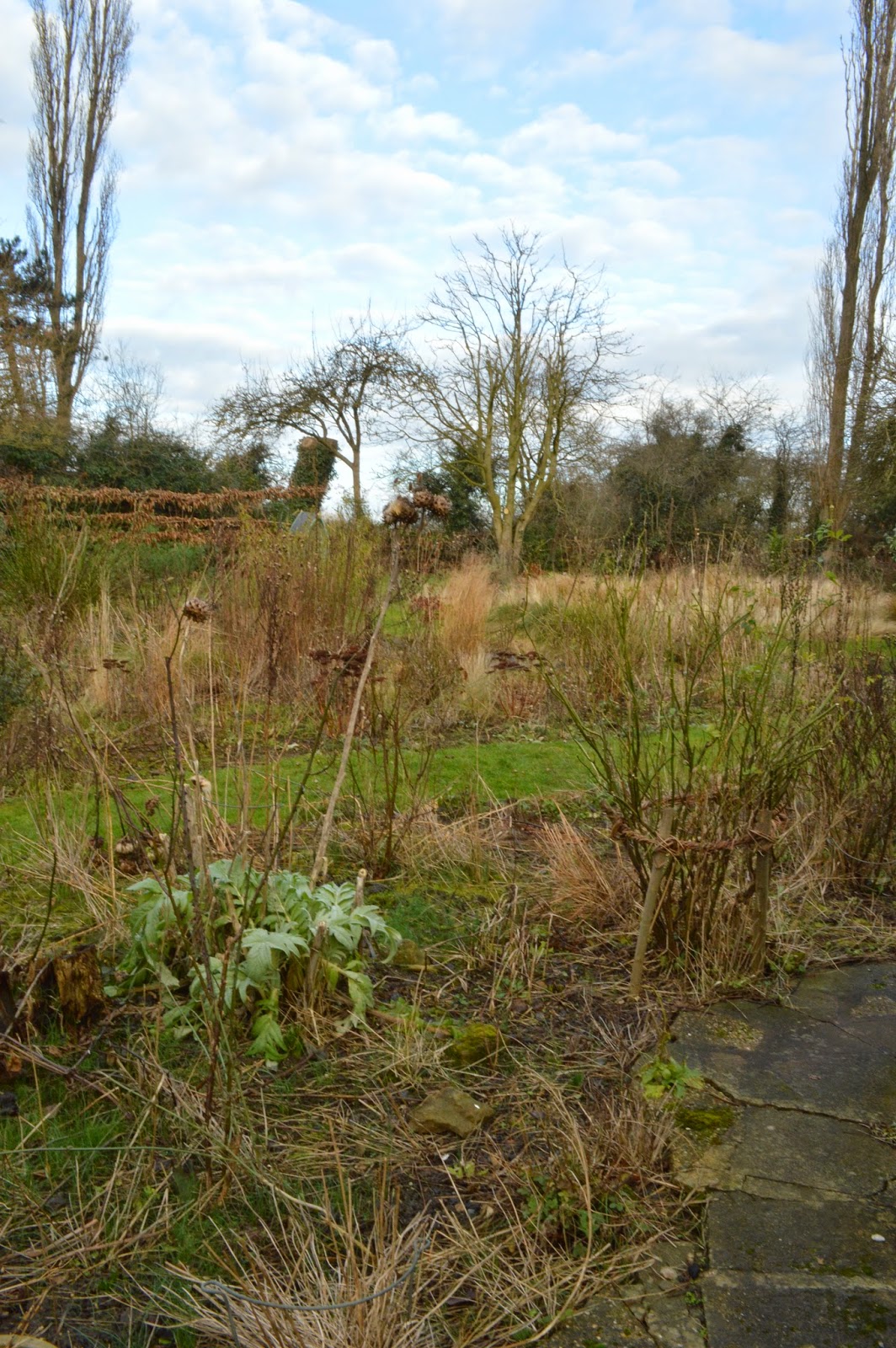 Around to the back garden it still looks very wintery.  The green of the new cardoon growth is a sign of hope of life returning. 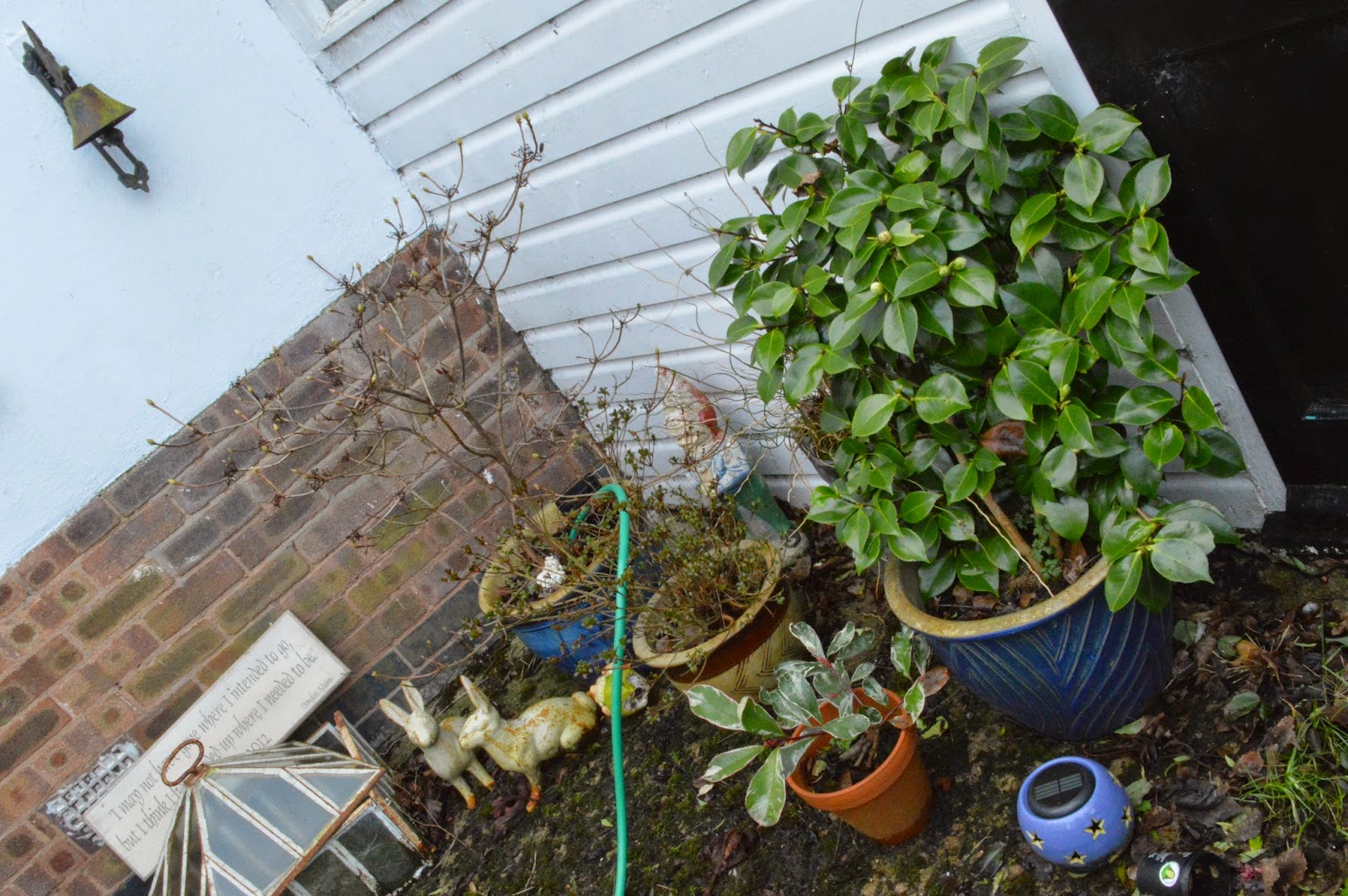 In the Courtyard the Camellia is covered in buds and the Rhododendron luteum in the corner is also covered with buds.  Don't ask me why I decided this needed a slanty photograph, just assume its art. 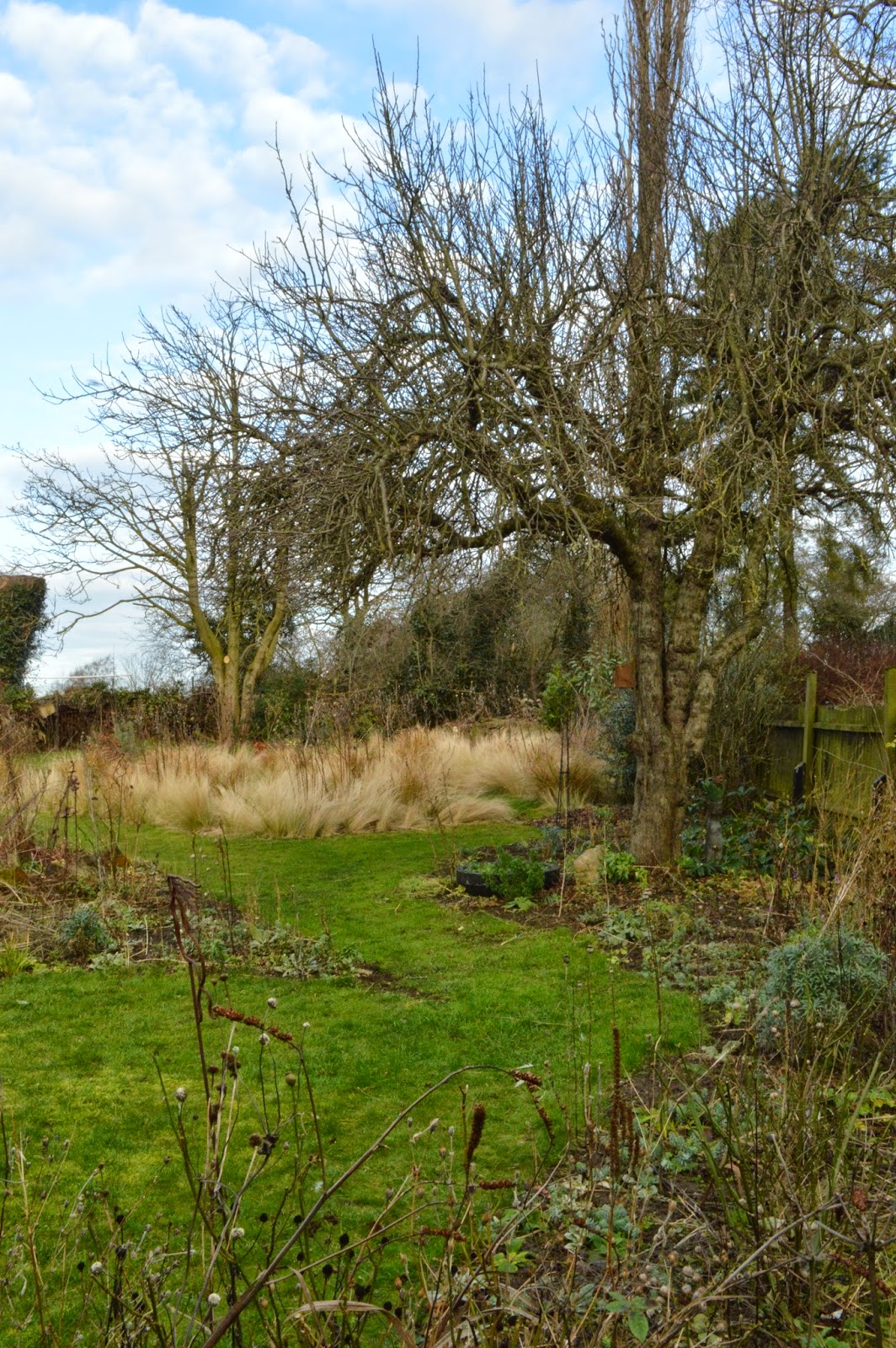 The view from the rear of the Conservatory Border up to the Prairie Borders makes me happy.  The Prairie Borders add good movement this time of year.  It will not be long before they get their Spring hair cut so I make the most of them at the moment. 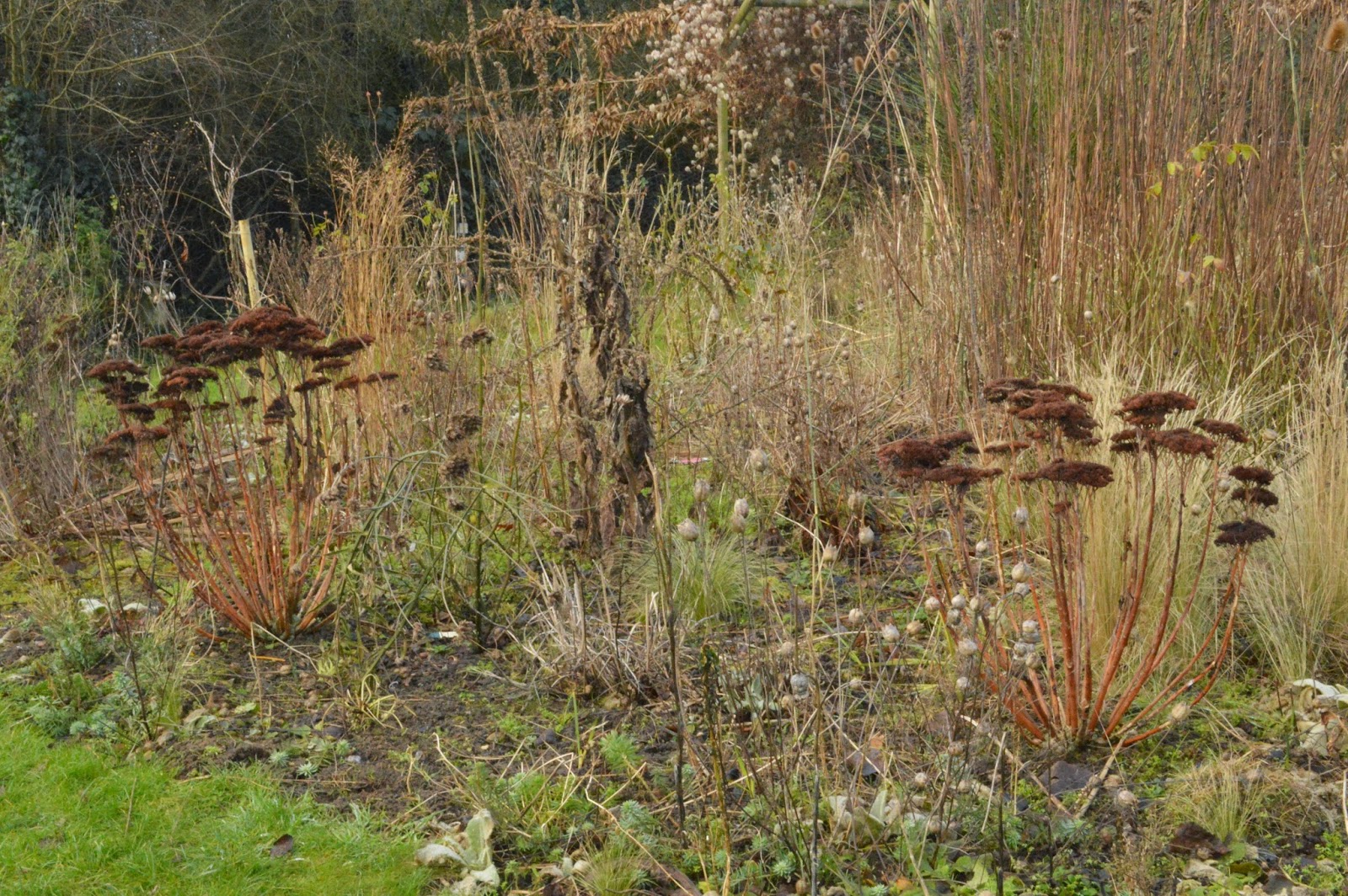 In the Pond Border the sedums are providing good structure.  I will be propagating more of these next year.  They have to be one of the easiest plants to create more of. 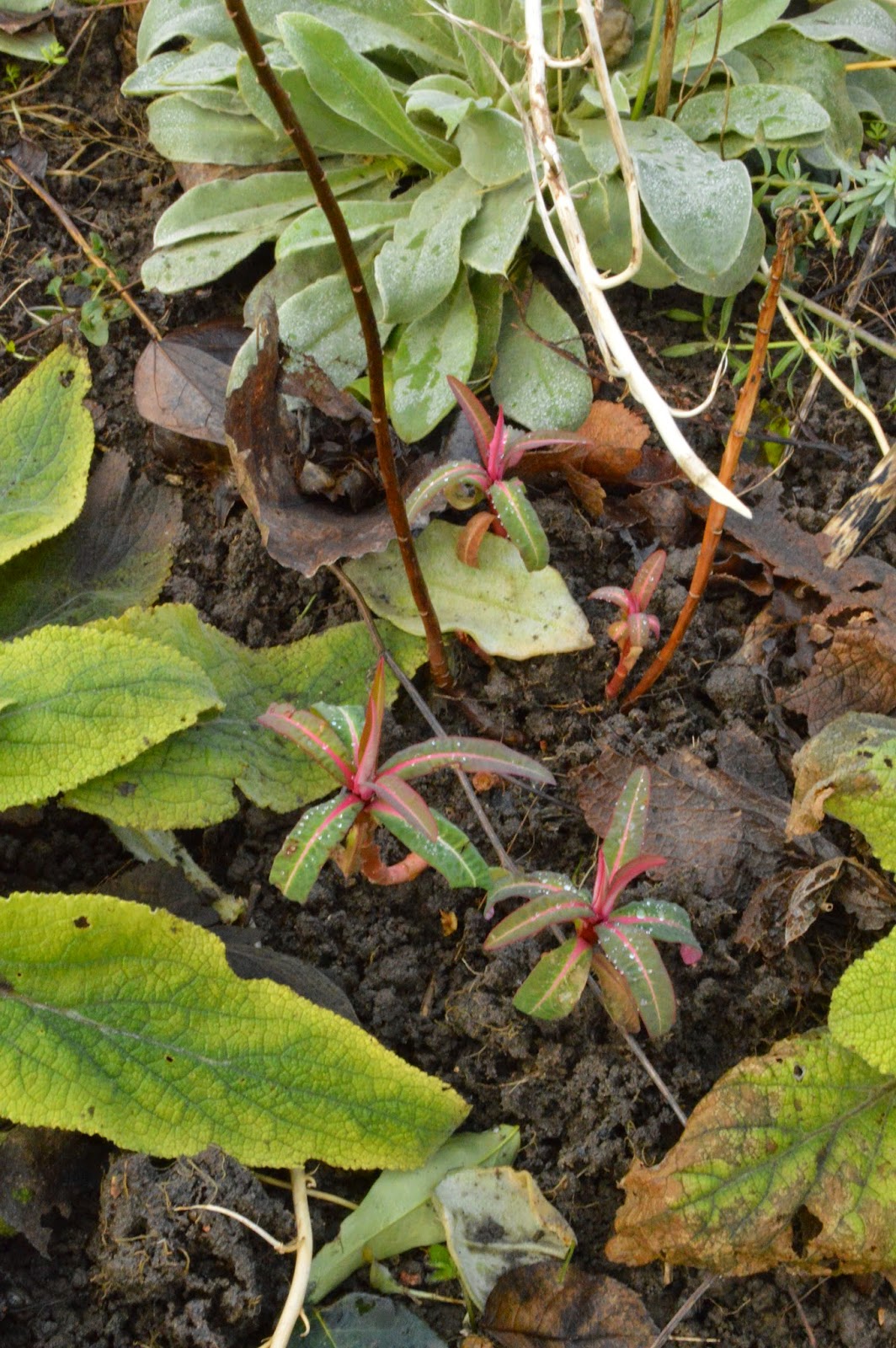 A closer inspection shows that life is returning.  This euphorbia is coming up well.  This is also very easy to propagate, I started with one plant and now have four. 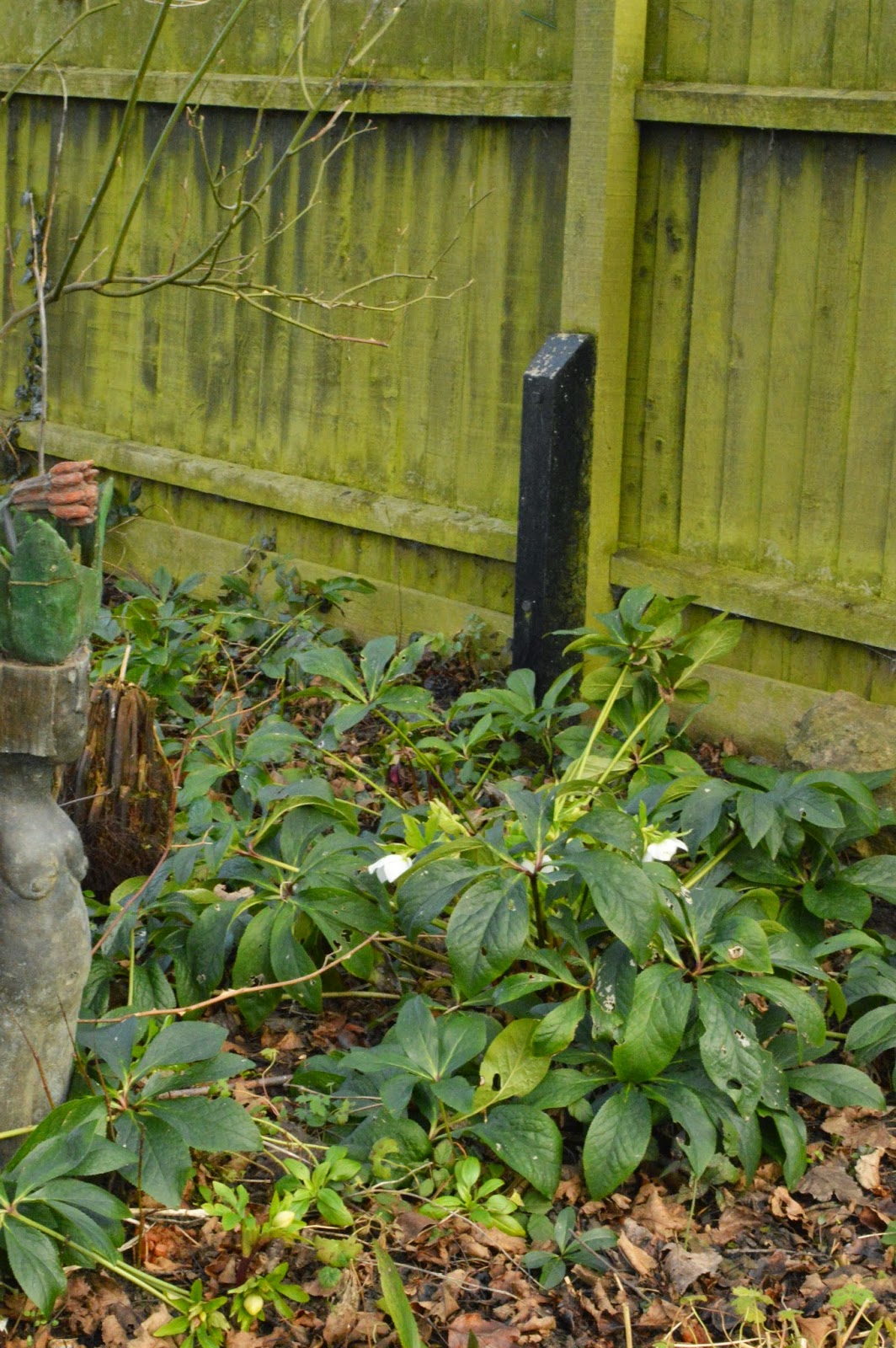 In the Spring Border the Hellebores are starting to flower.  The white ones start first, next will be the red and then the more fancy double ones will be last. 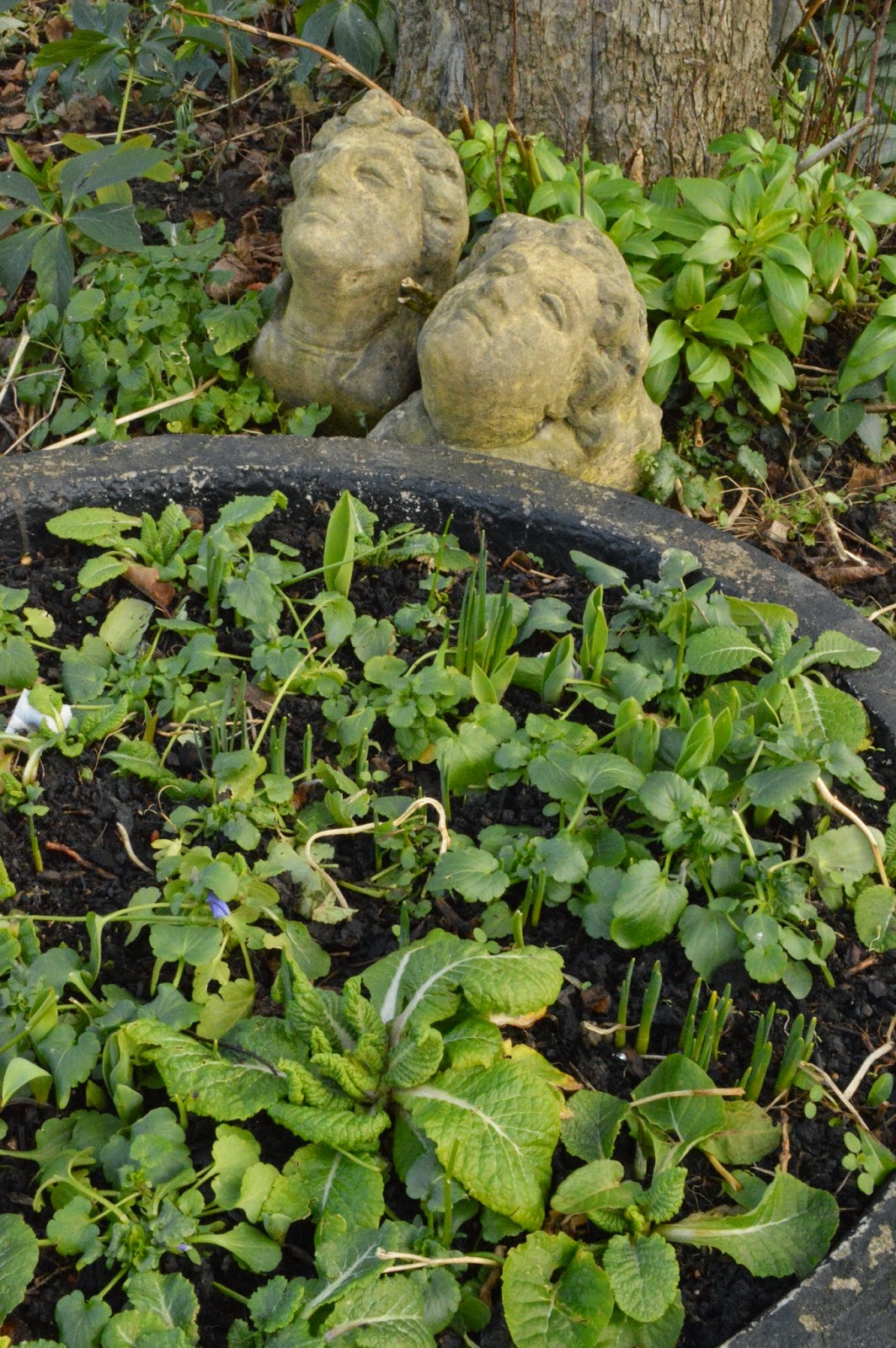 Natasha and Elsie continue to keep an eye on the concrete planter, which is showing lots of bulb growth and the primroses will soon be in flower. 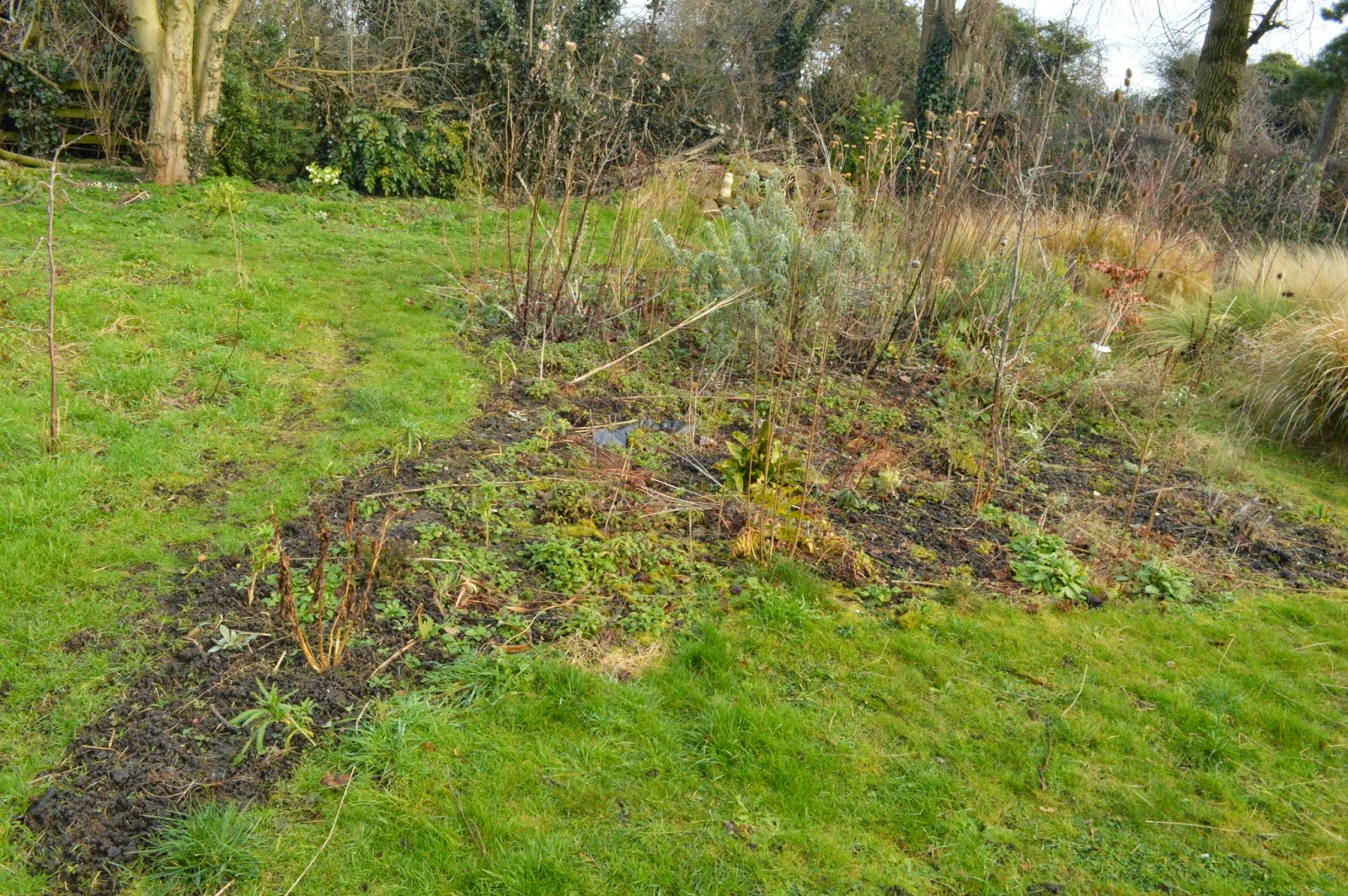 The Woodland Border is good in parts.  Last year's heather is not doing very much at the moment and some of it was killed off by the workmen who dealt with the great poplar disaster earlier in the year.  The poplar problems did stop a lot of development at this end of the garden as I was a bit worried about large parts of it falling on it. 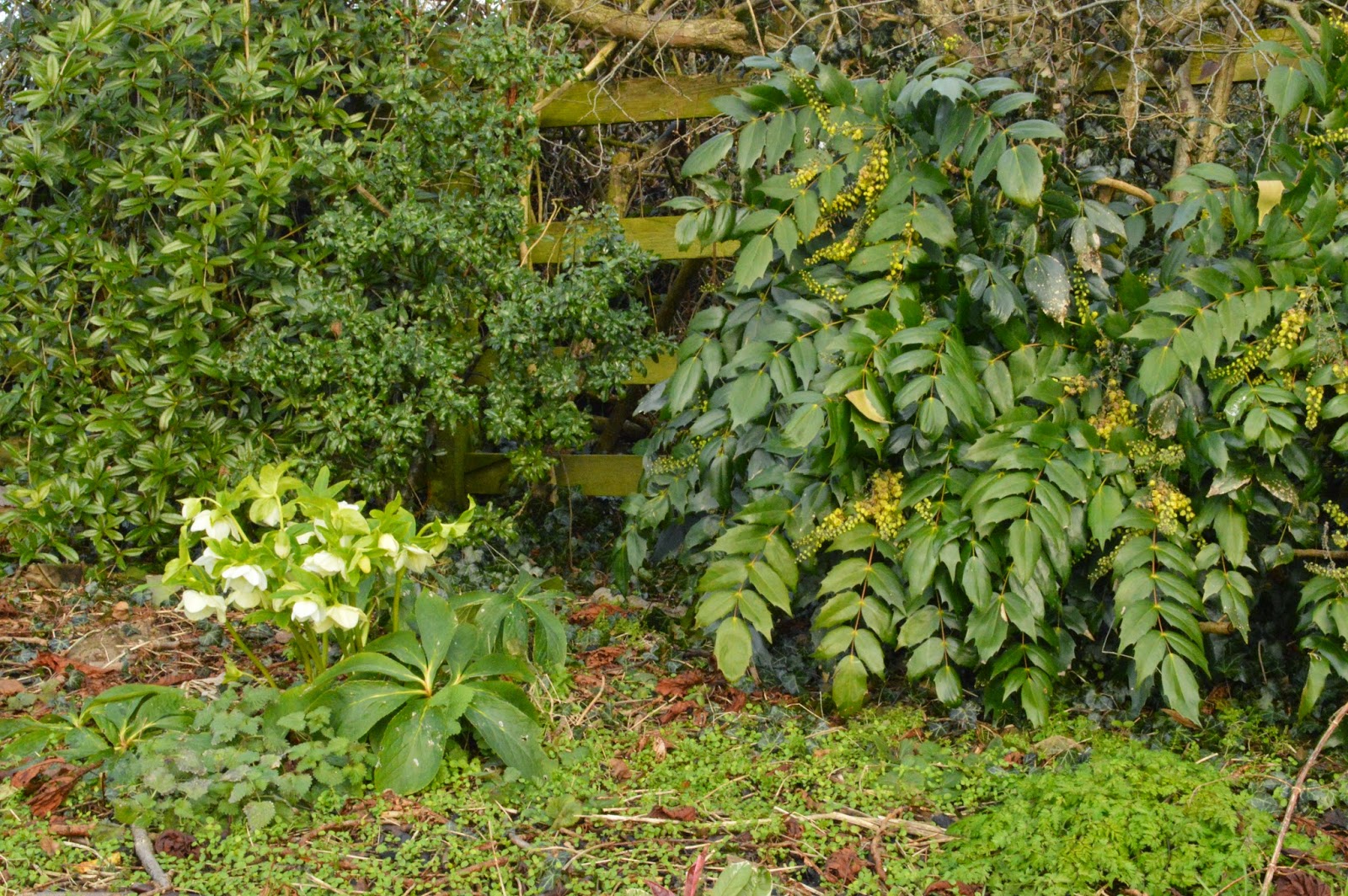 Right at the top of the garden this Hellebore has been flowering for almost as long as the Mahonia.  I want to plant more Hellebores up here and as I have many seedlings I will relocate some up there. 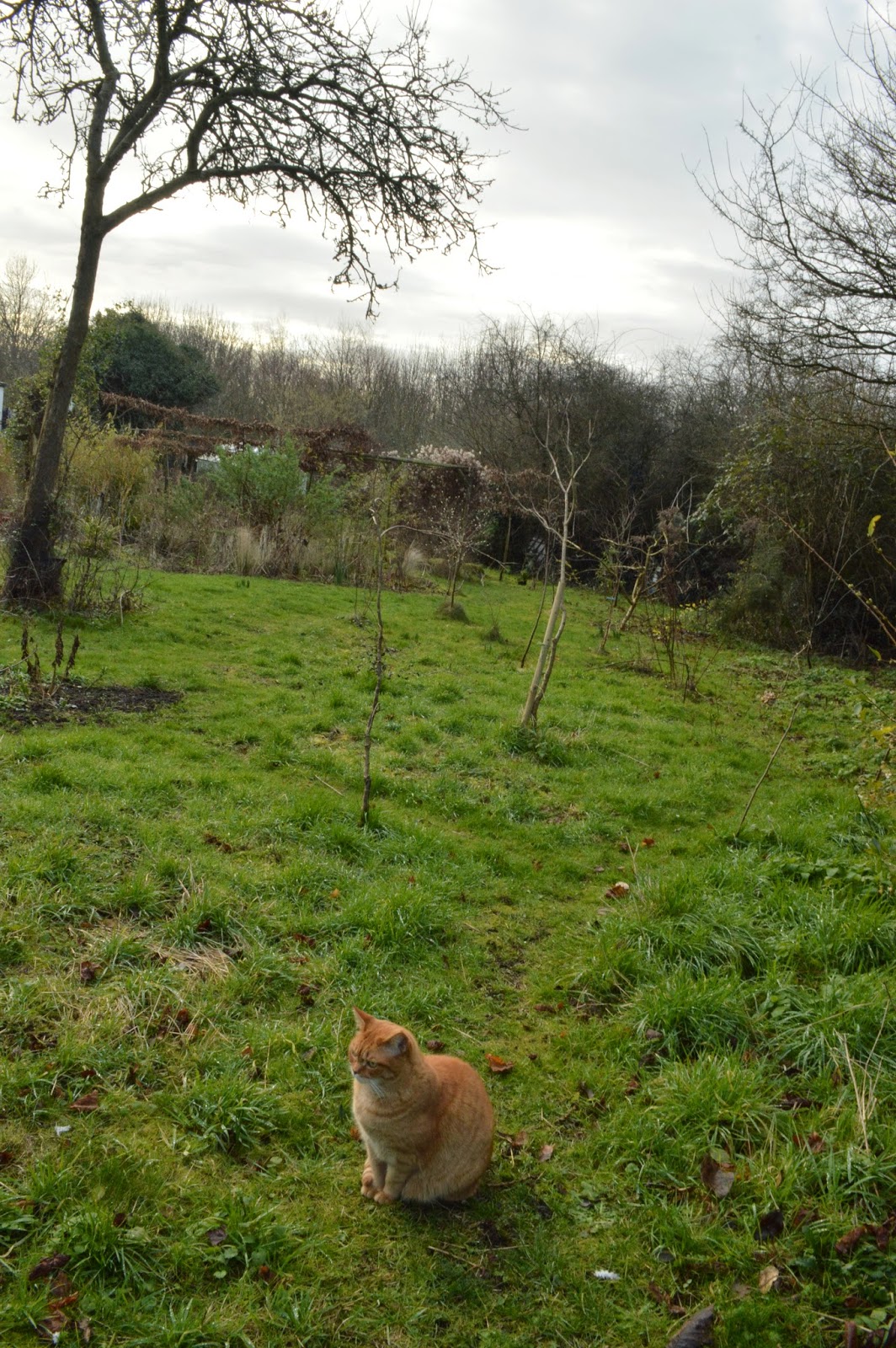 The Wild Garden is just waiting to start its Spring growth.  It is one of my favourite parts of the garden in Spring as there are many bulbs now planted in it. 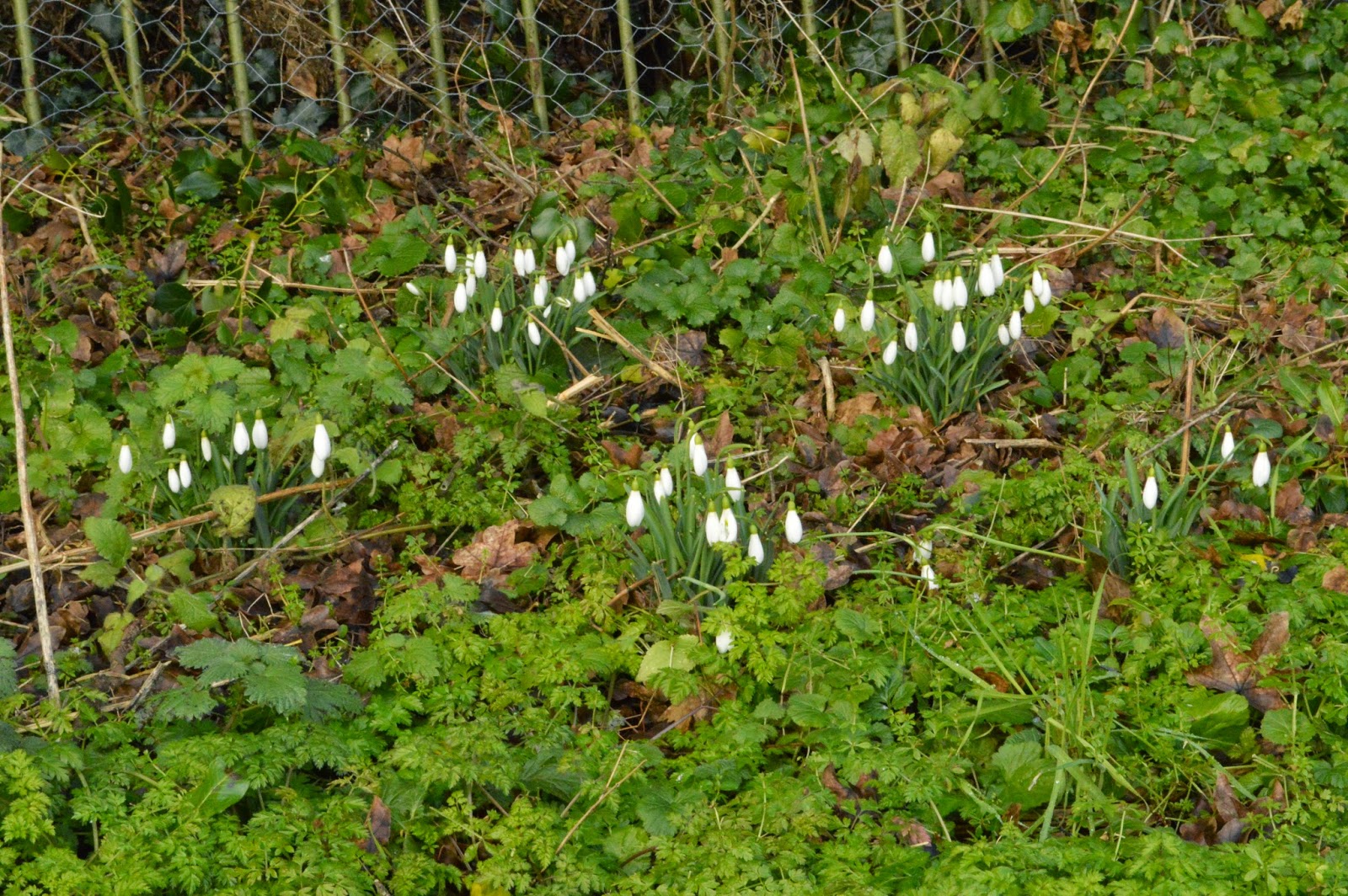 I will be planting more snowdrops this year.  I try to add to the number every year and one day there will be drifts - yes drifts. 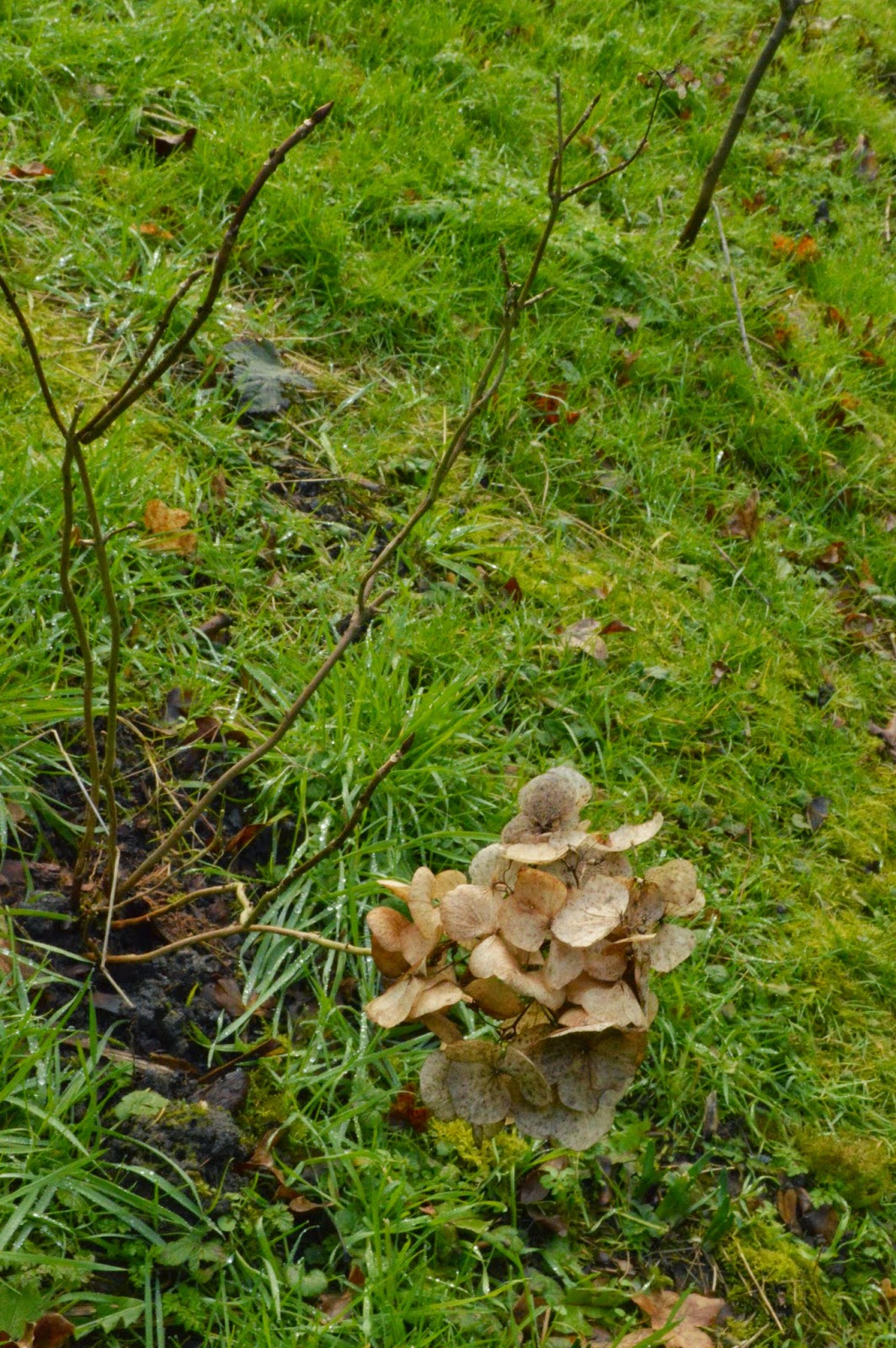 The hydrangea is hanging on it its deadflowers, 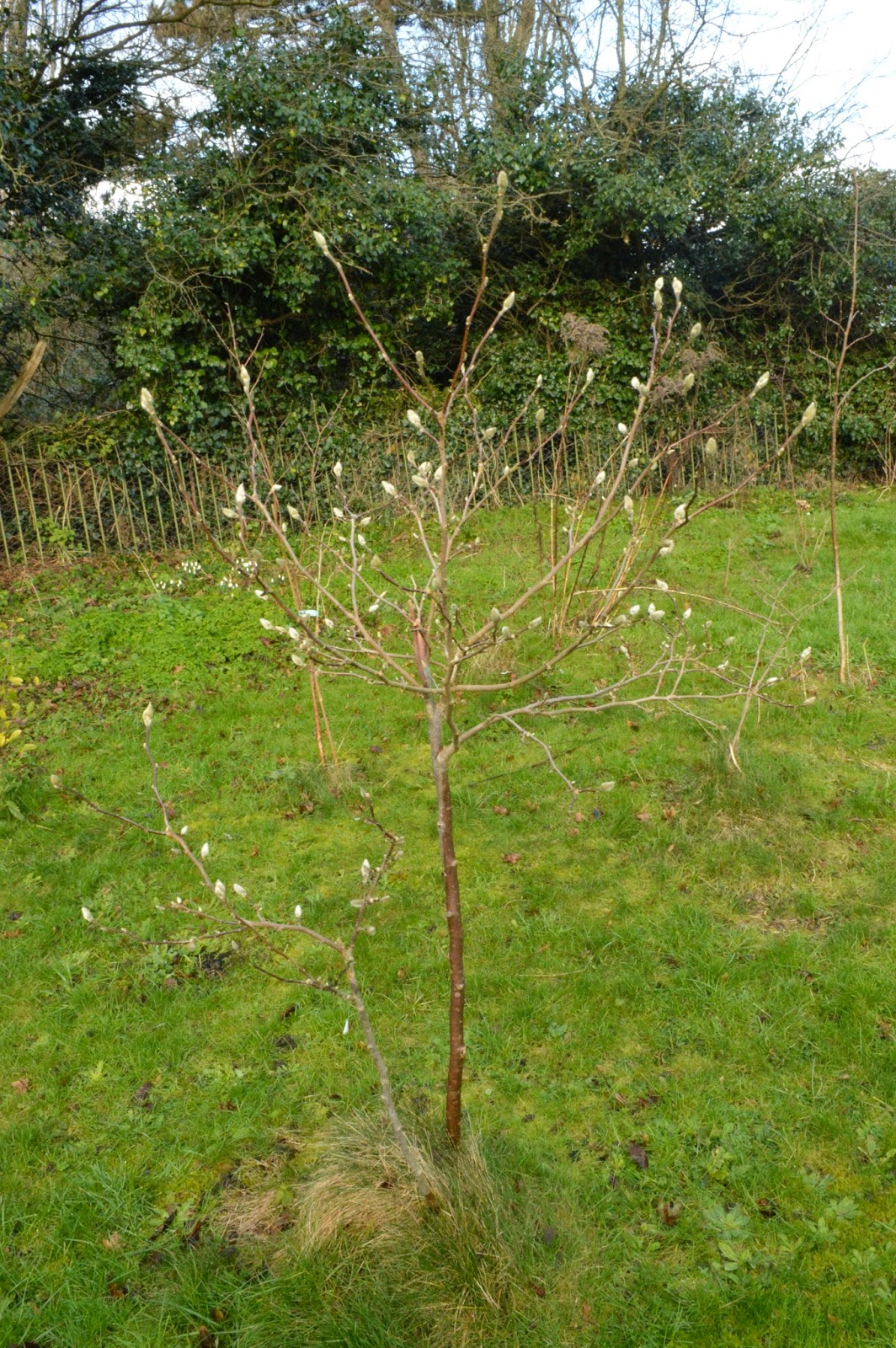 The Magnolia stellata is covered in buds. 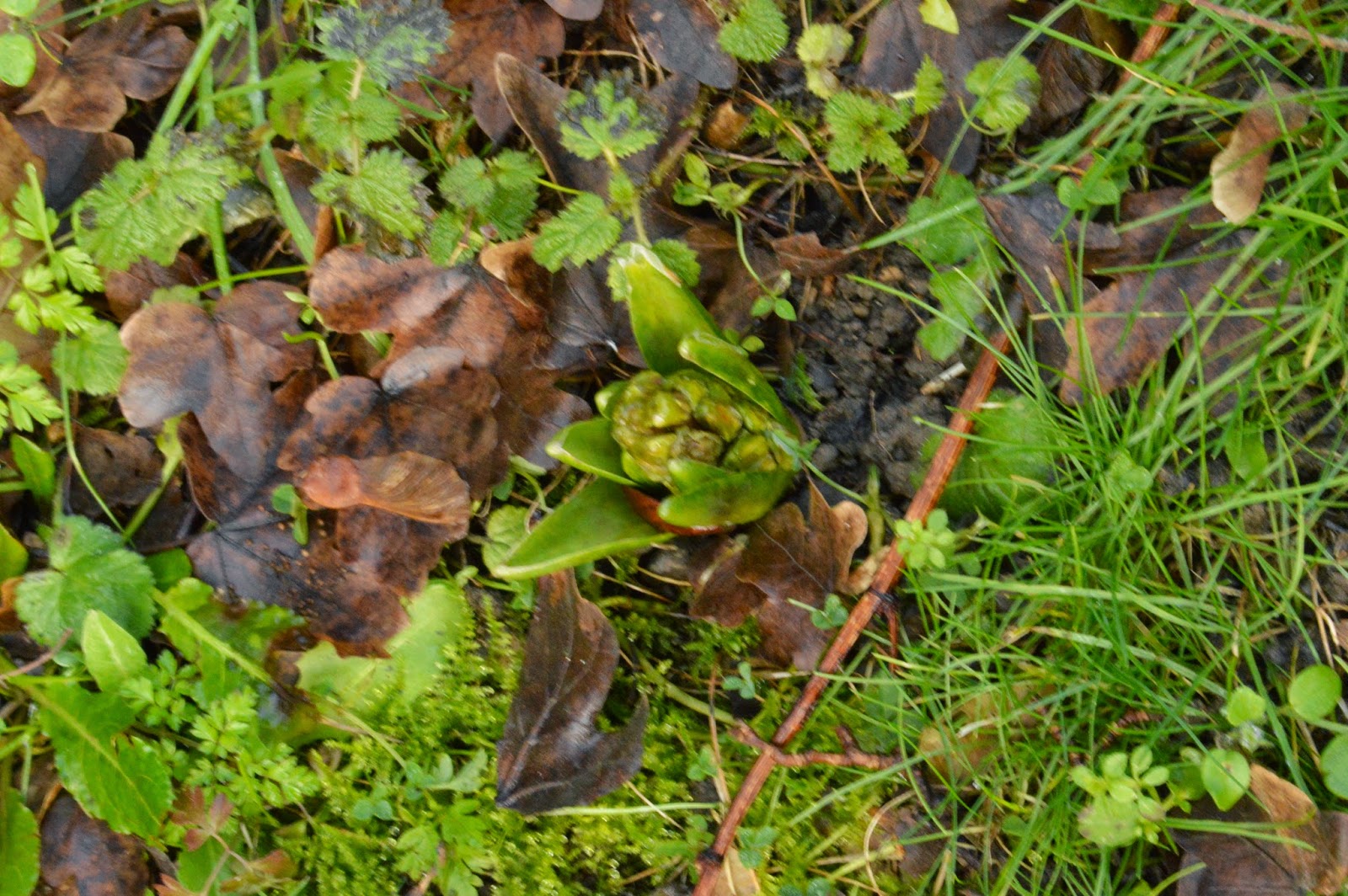 The hyacynths are also coming up, I am looking forward to them flowering. 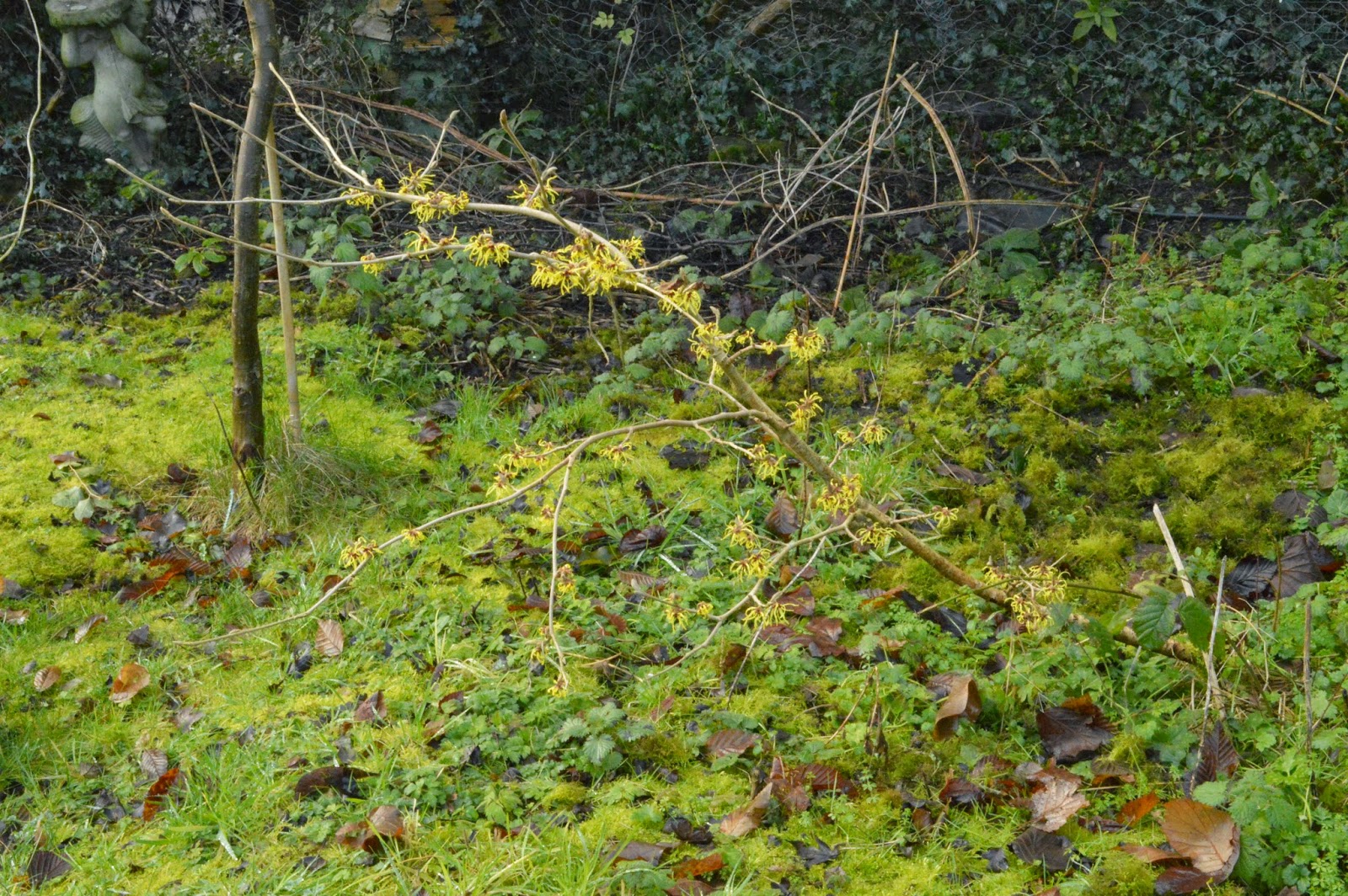 Out of the three hamamelis I have, this is the one that performs the best.  Every year it gets a little better, the other two, well, not so good. 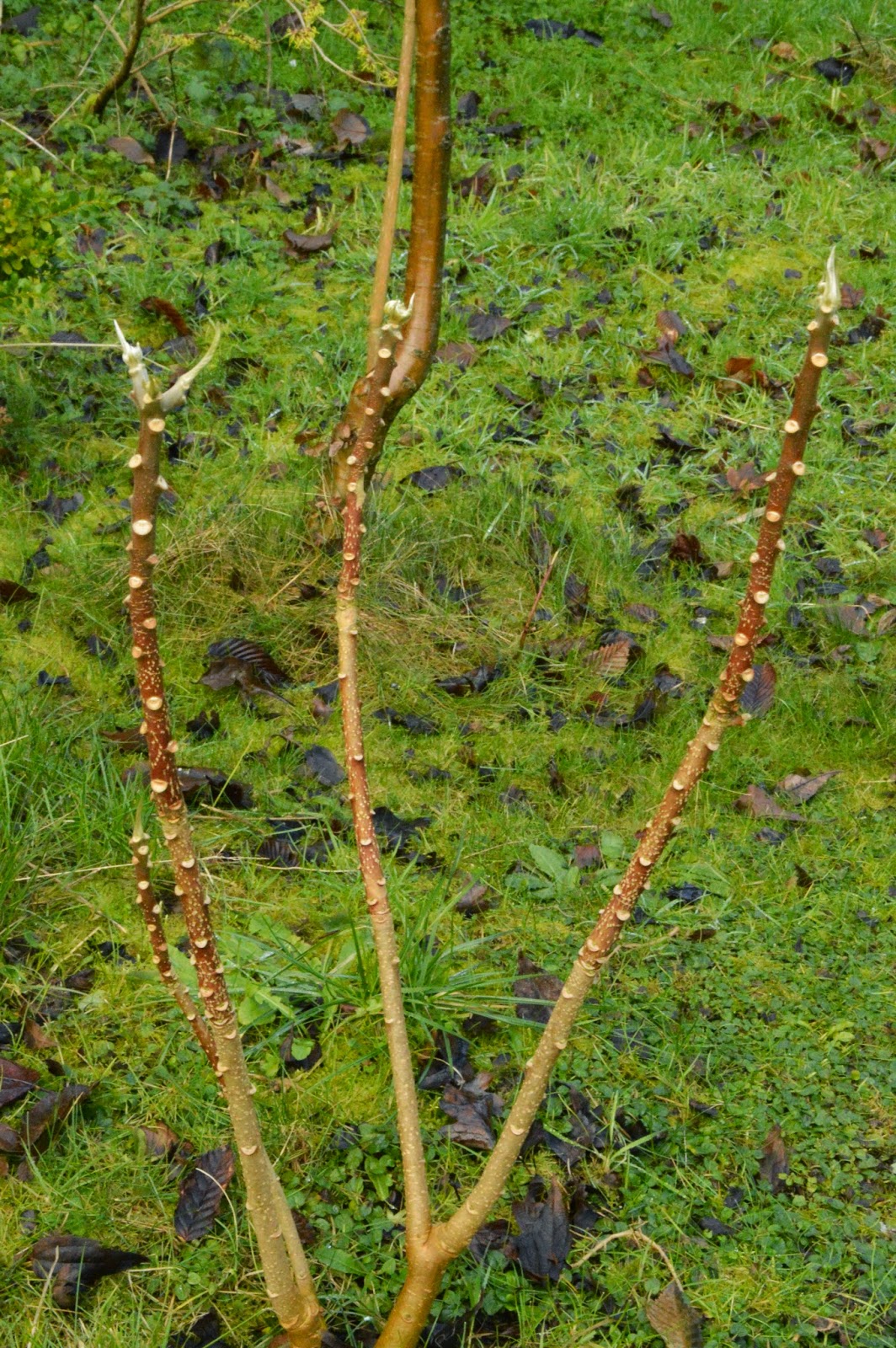 The Edgeworthia still seems to be alive, this is good.  I am hopeful for flowers this year. 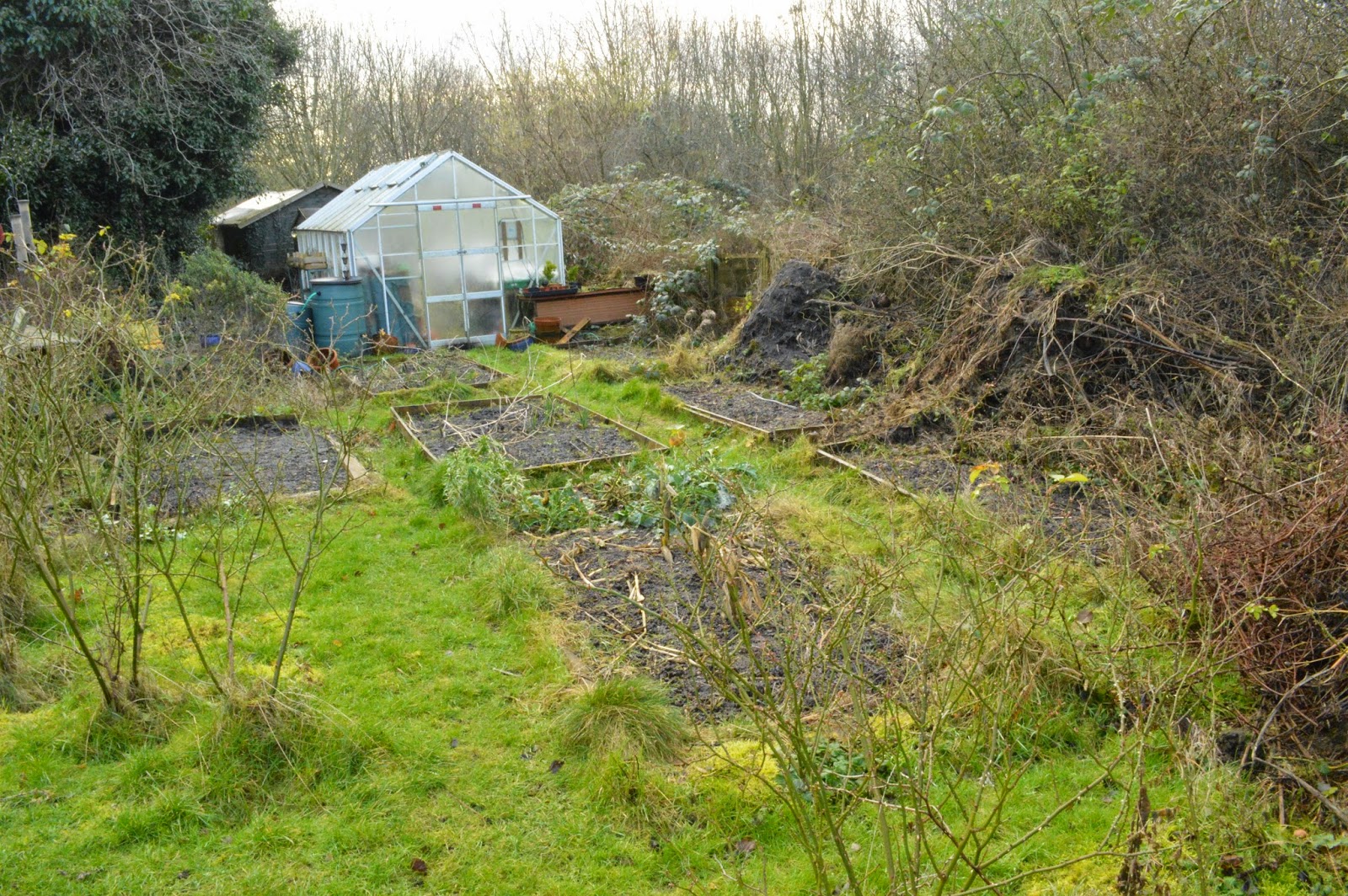 The veg beds look swampy and wintery, this is because they are. 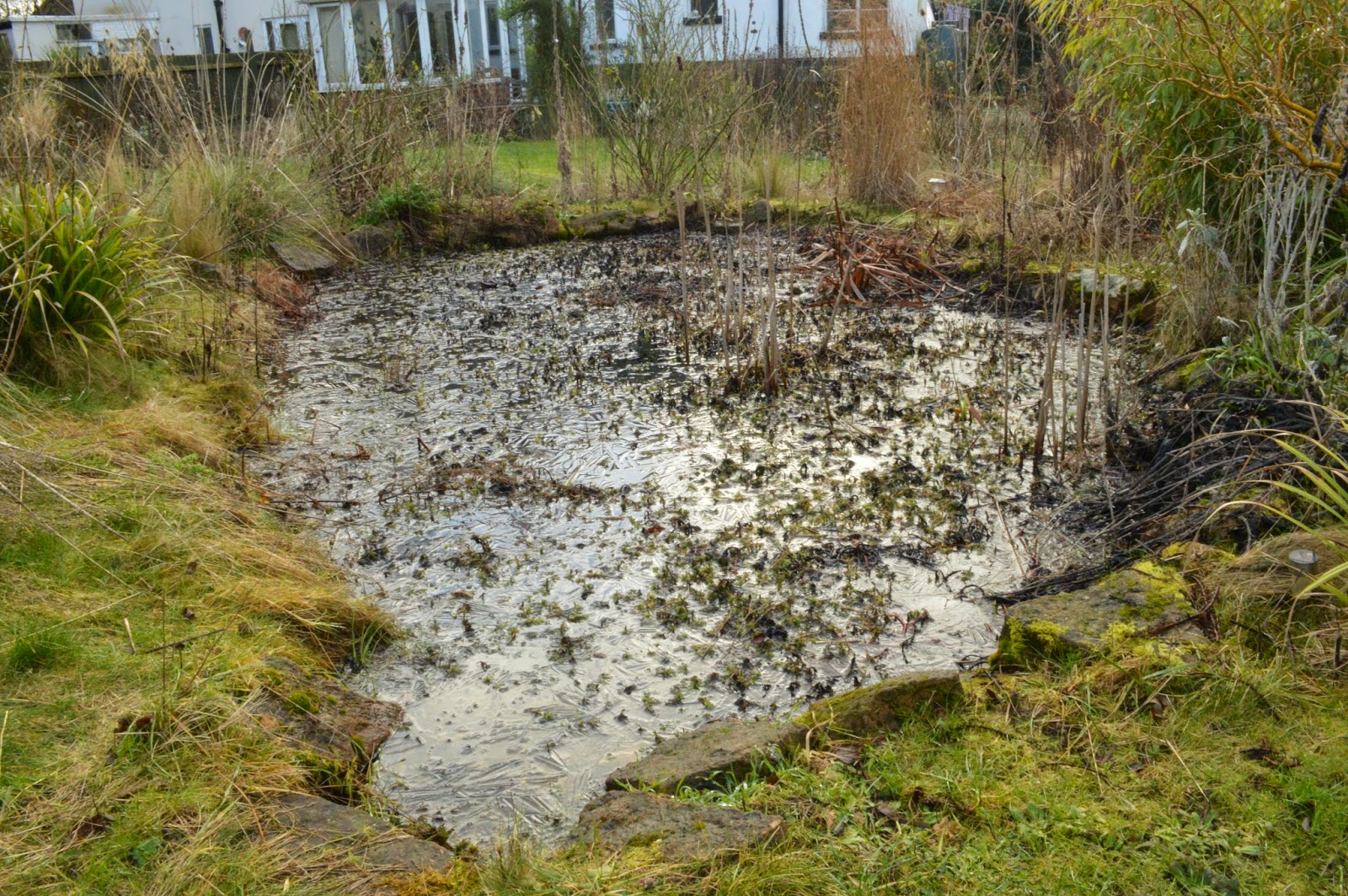 and the pond is frozen, only lightly thankfully, but it has been frozen quite a bit this winter.

I took these photographs the other day as time has been short this week and I was not sure when I would find time to take photographs.  Weather has decided to play its Winter-joker card and snow arrived late this week, so here is a snowy photo though even as I write it is thawing away quickly. 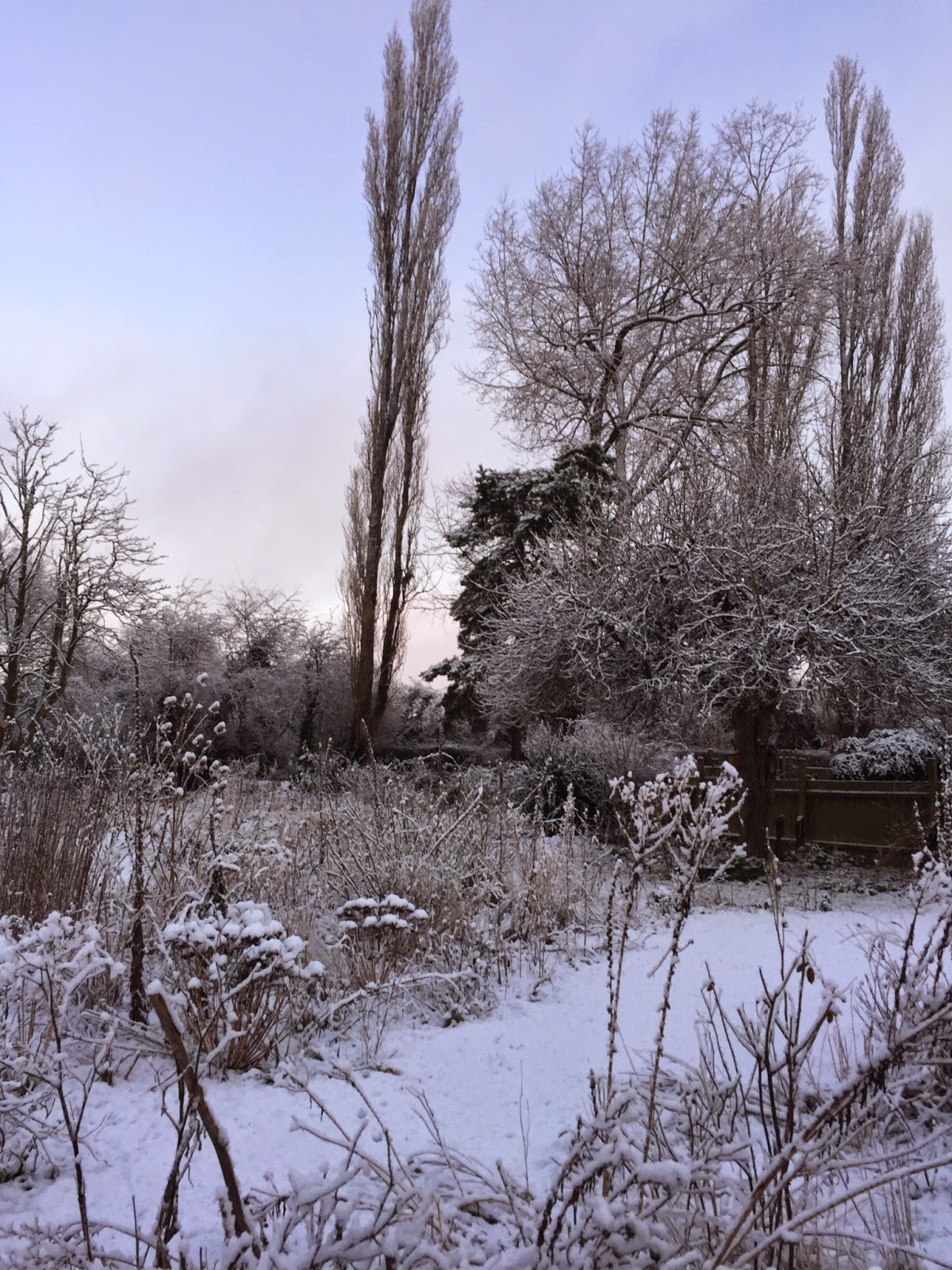 Thanks go as ever to Helen for hosting this meme.
edgeworthia End of month view euphorbia hyacinths magnolia stellata mahonia