A tale of two lions 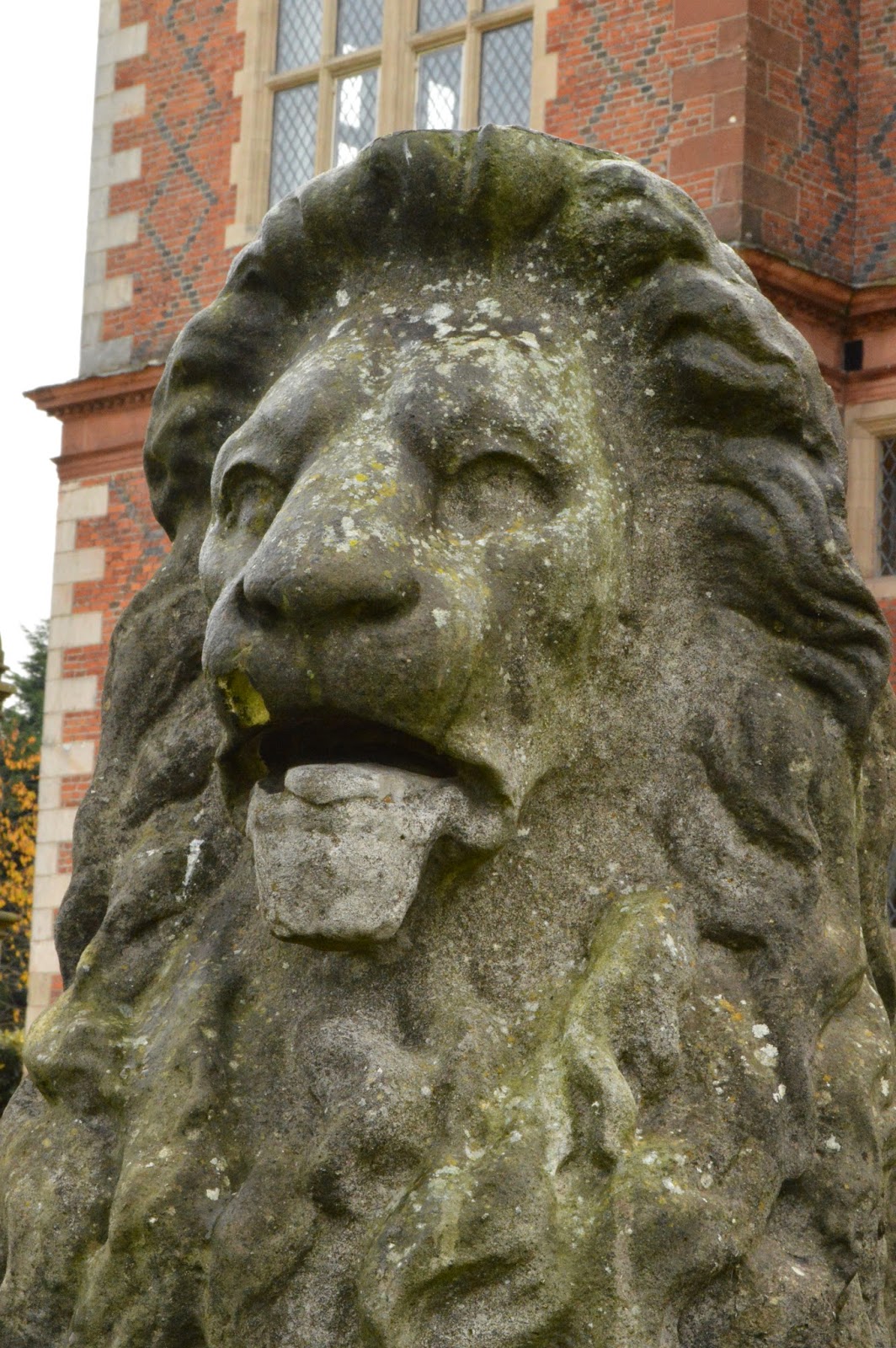 This magnificent beast guards steps down to the main formal lawn at Crewe Hall, once the home of the Crewe family and handily located just outside of Crewe. 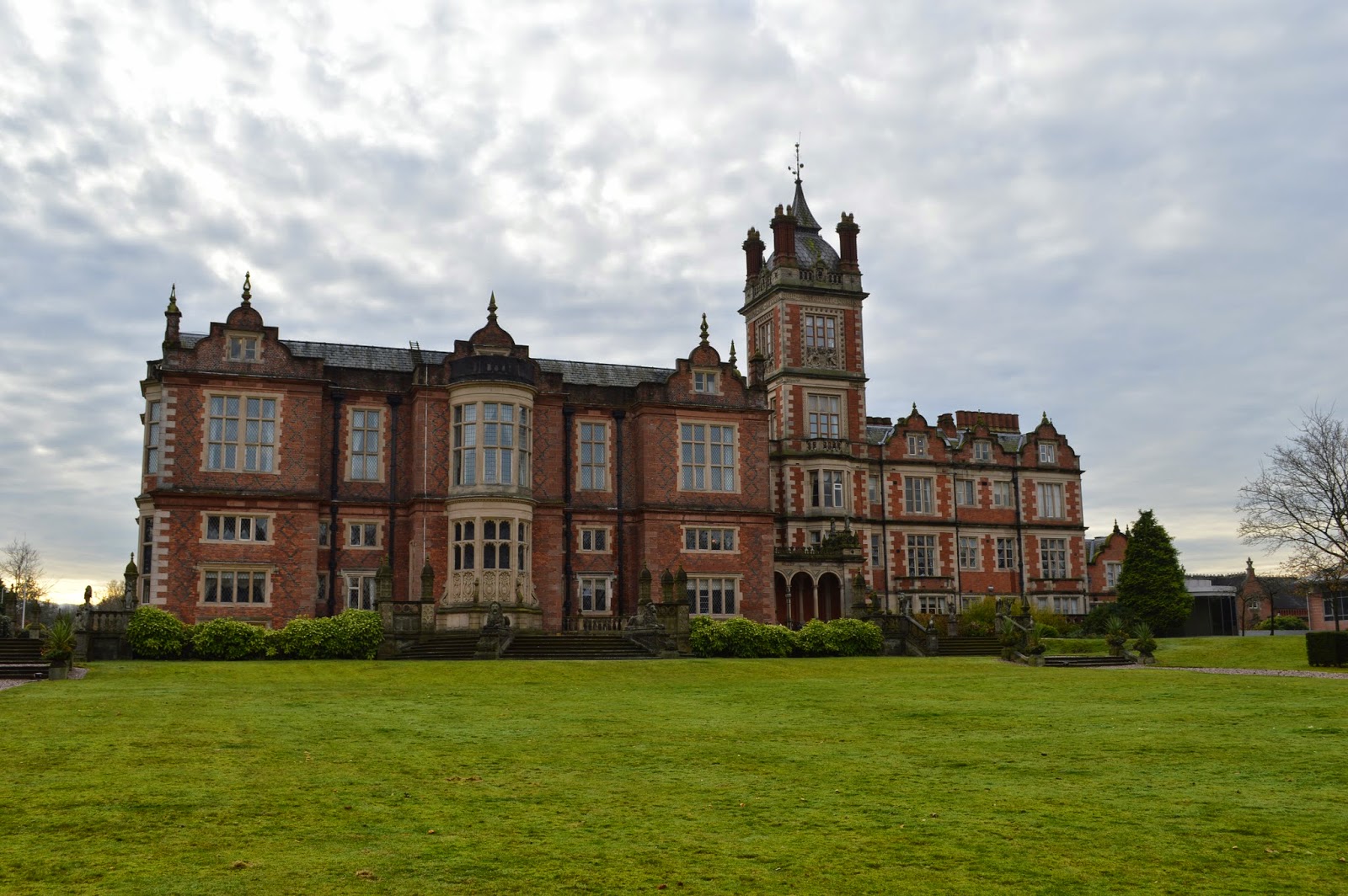 It is a very fine example of a Jacobean mansion.  It is now a hotel and conference centre and a wedding venue. 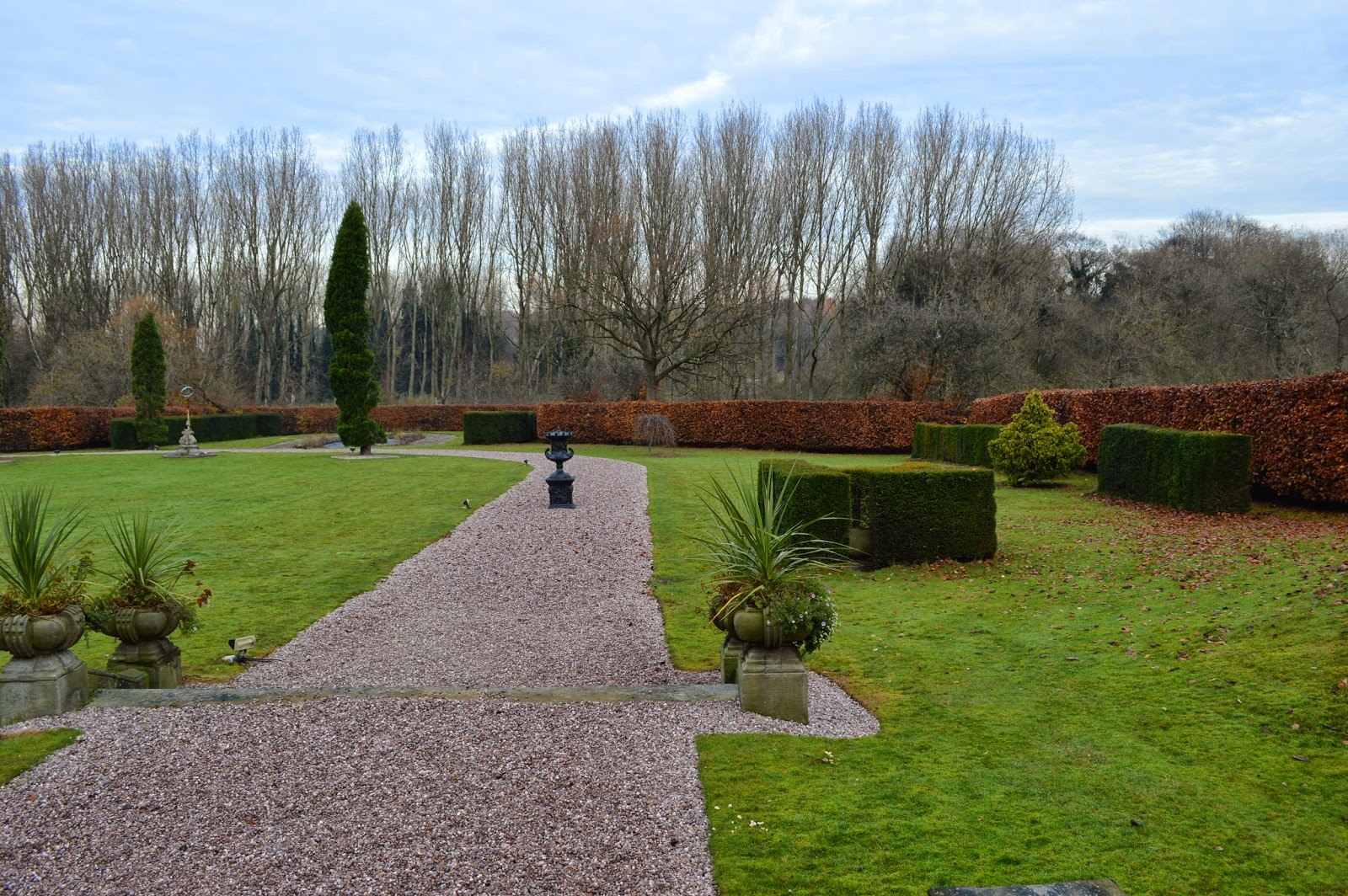 I was staying there recently for a conference, I read up on the place before going and wikipedia talks of grounds designed by Lancelot (Capability) Brown, Humphrey Repton, William Emes and others.  How could I not be excited at staying at such a place?  Though I was forewarned as the same website did say that the grounds have been placed on a heritage at risk register as basically, the gardens have all but gone.  The war years and years of being used as offices has meant the gardens have disappeared.  Only the ghosts remain of what must have once been great. 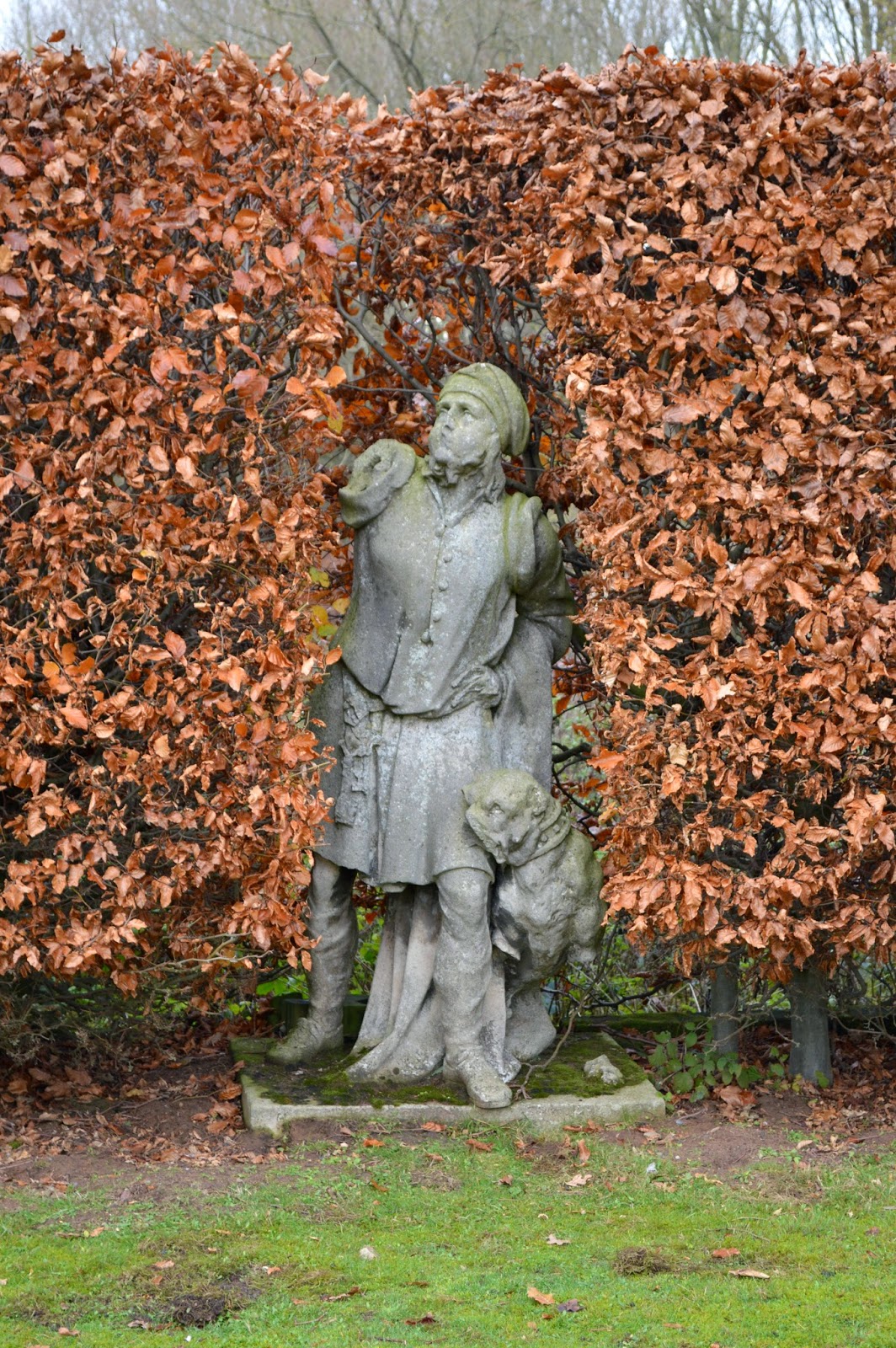 Hedges reveal the odd statue, but few of the statues are not damaged in some way, 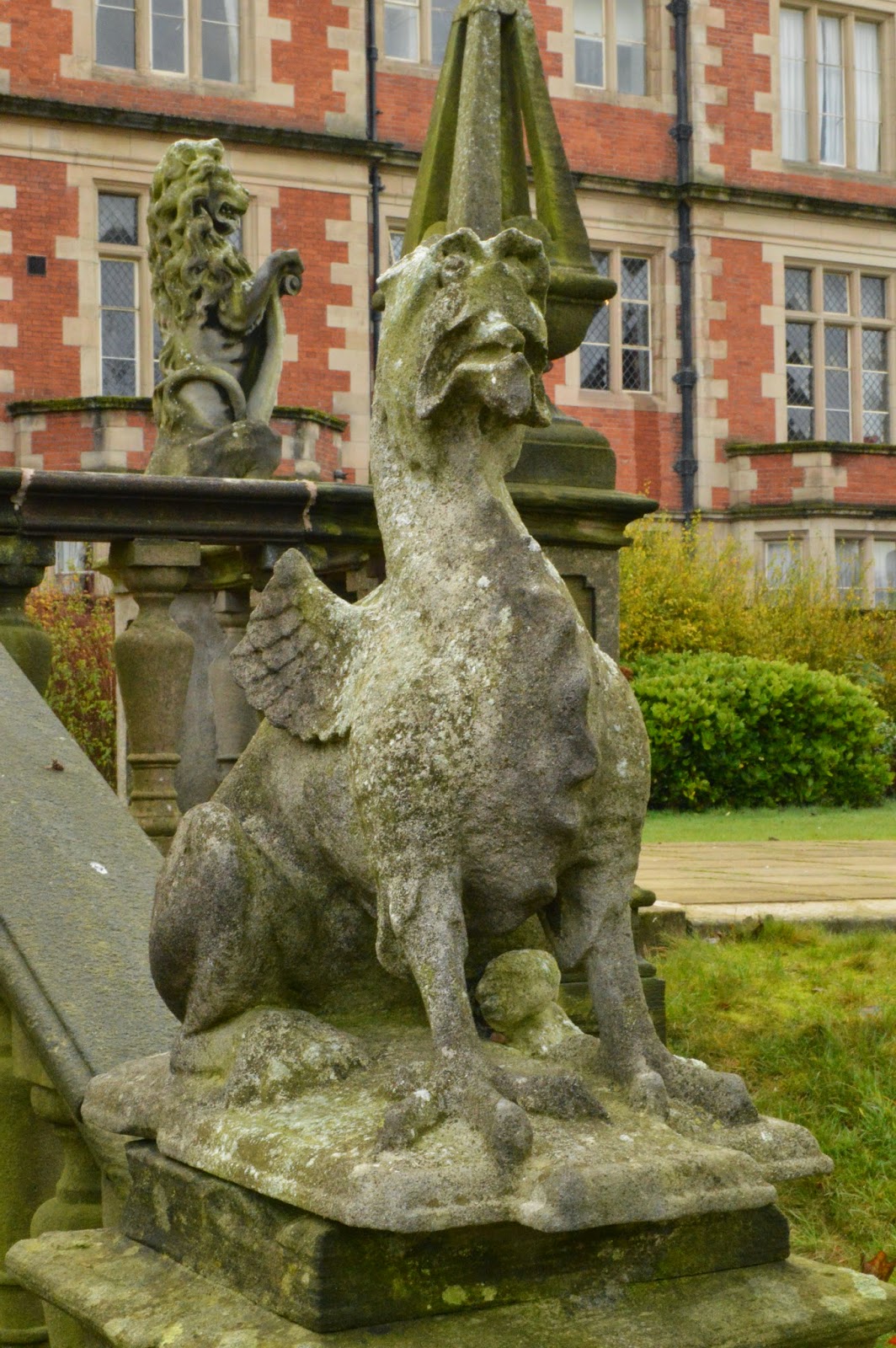 It is a home for the mangled and beheaded, 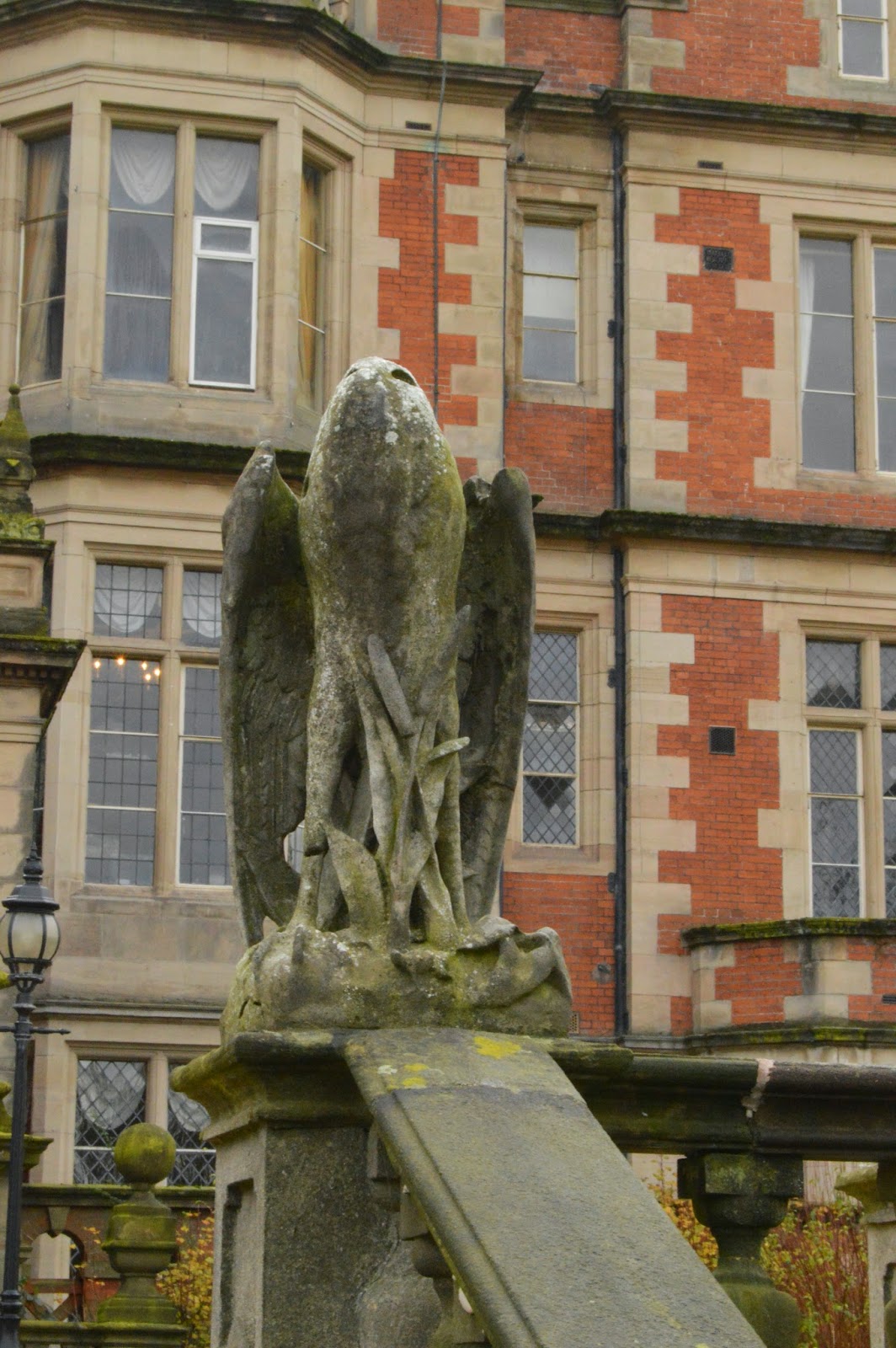 or the empty plinth, clearly vandals and thieves had made their presence known. 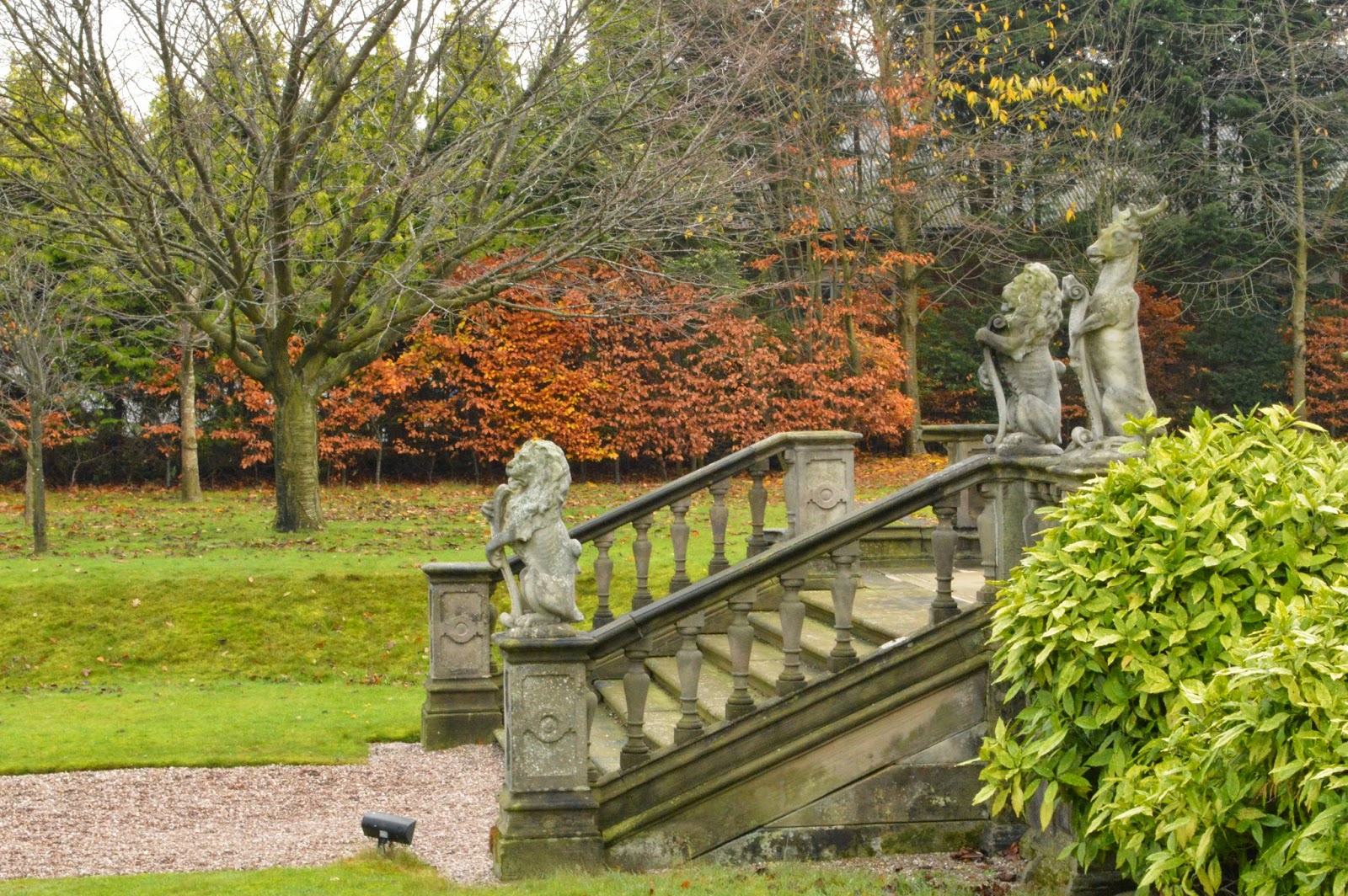 There are some wonderful trees, lots of beech hedging and a fine pond that is currently in its winter state. 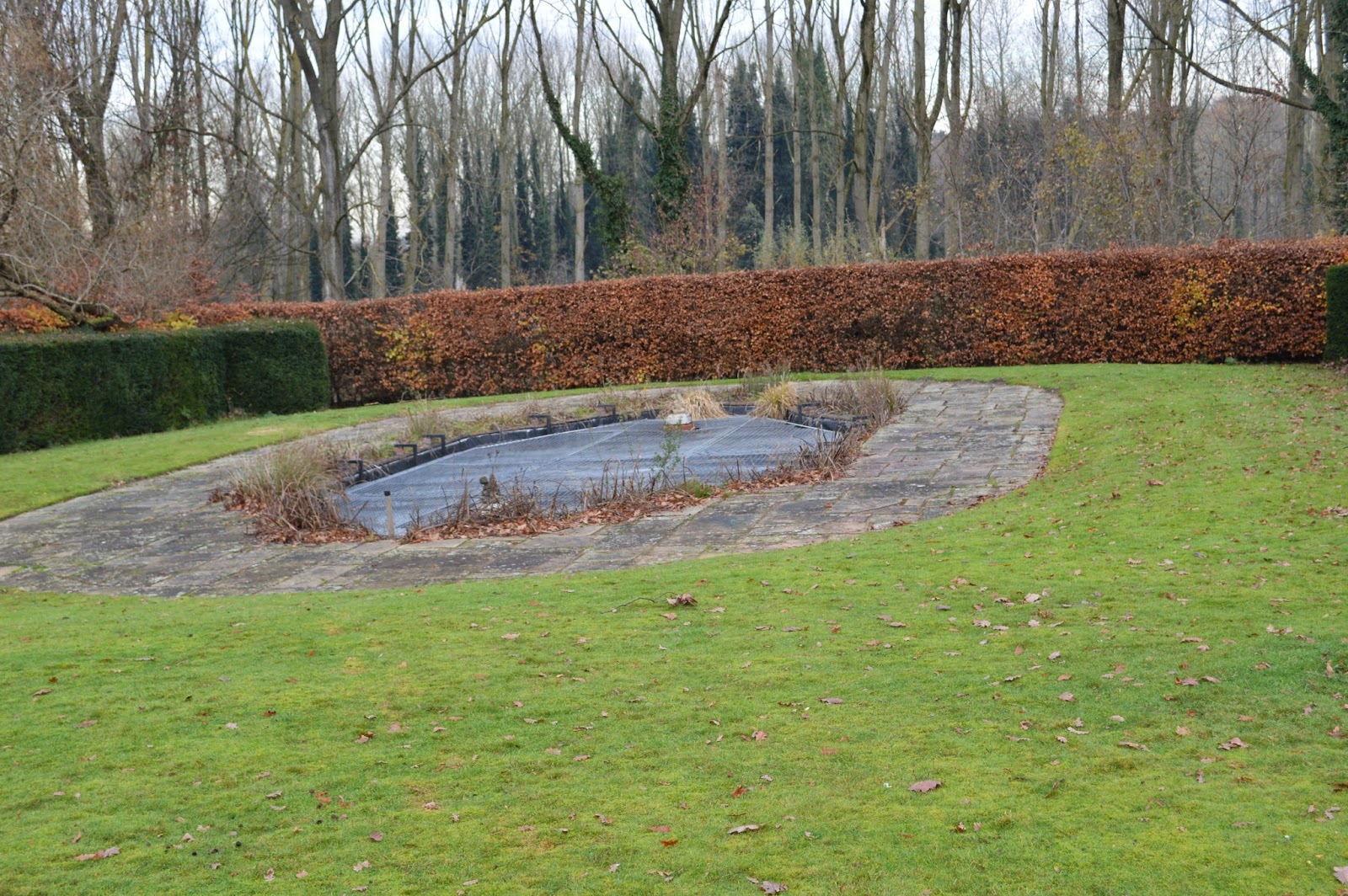 Don't get me wrong, the hotel is really good, I enjoyed my stay there, but the grounds felt like a echo of long gone glory days.  Of course going in November is not going to show a garden overflowing with colour and I have to say that the wedding photographs they had on display did look amazing, I am not knocking it as a venue but I mourn the loss of what had been.

So I moved on to lion number 2: 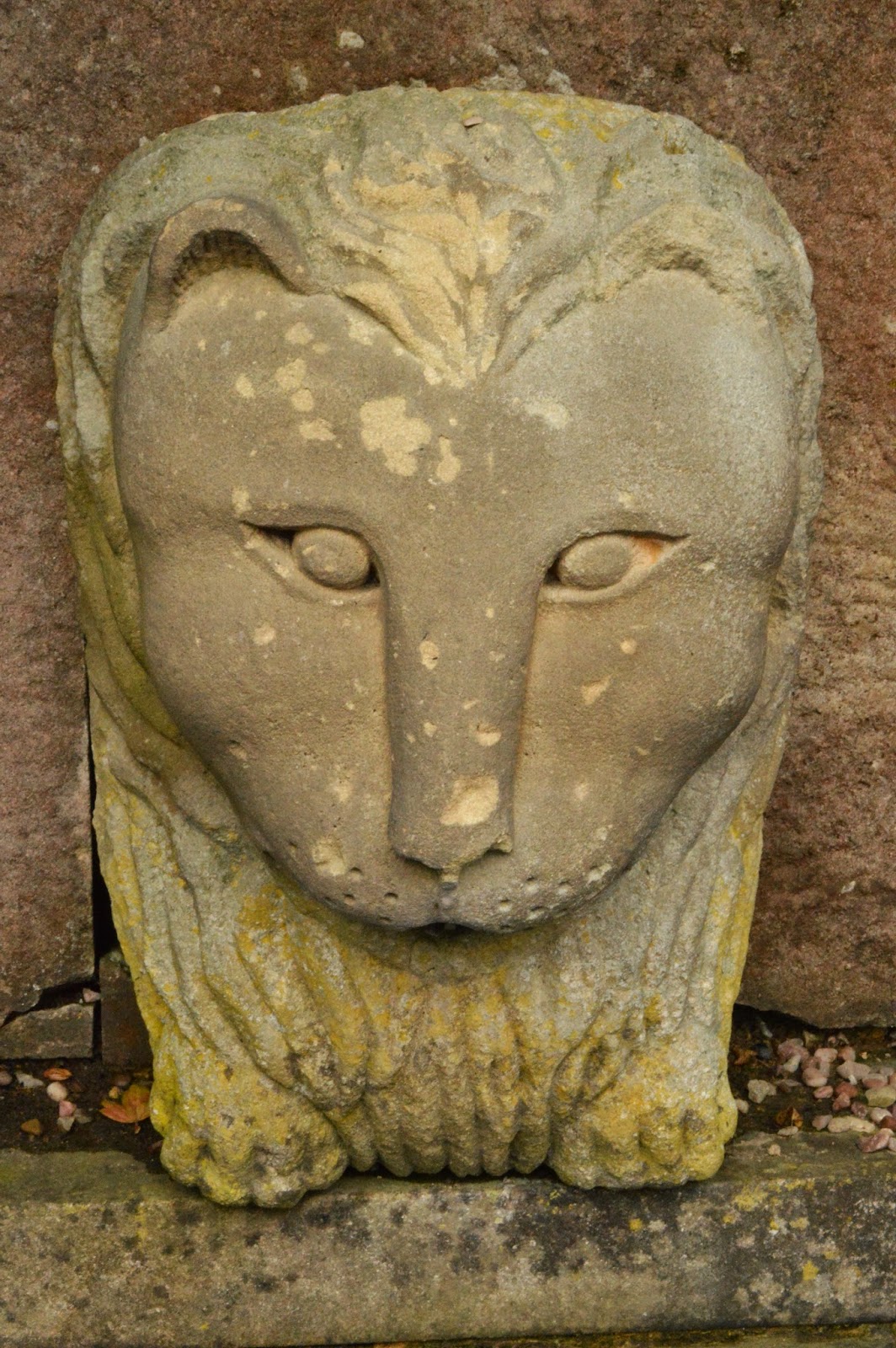 This rather fine animal is less imposing, in fact is not even a whole lion, but a water spout that drips into a basin, but his surroundings are a little more grand. 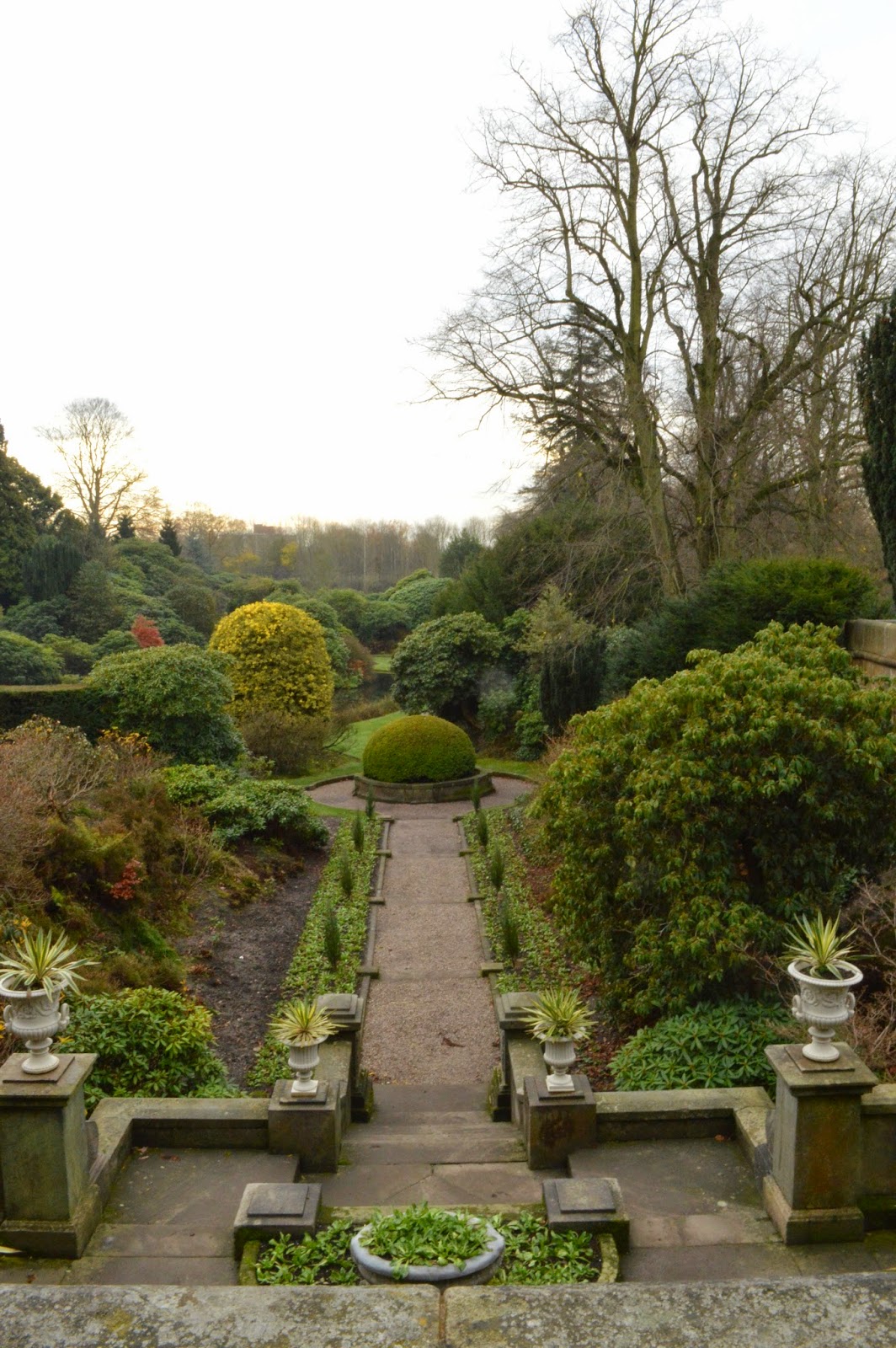 You know that moment when you enter a garden and you stop and just think wow - well that.  An entrance this grand and looking this good on a cold, moist, November day has to speak of great things to come.... 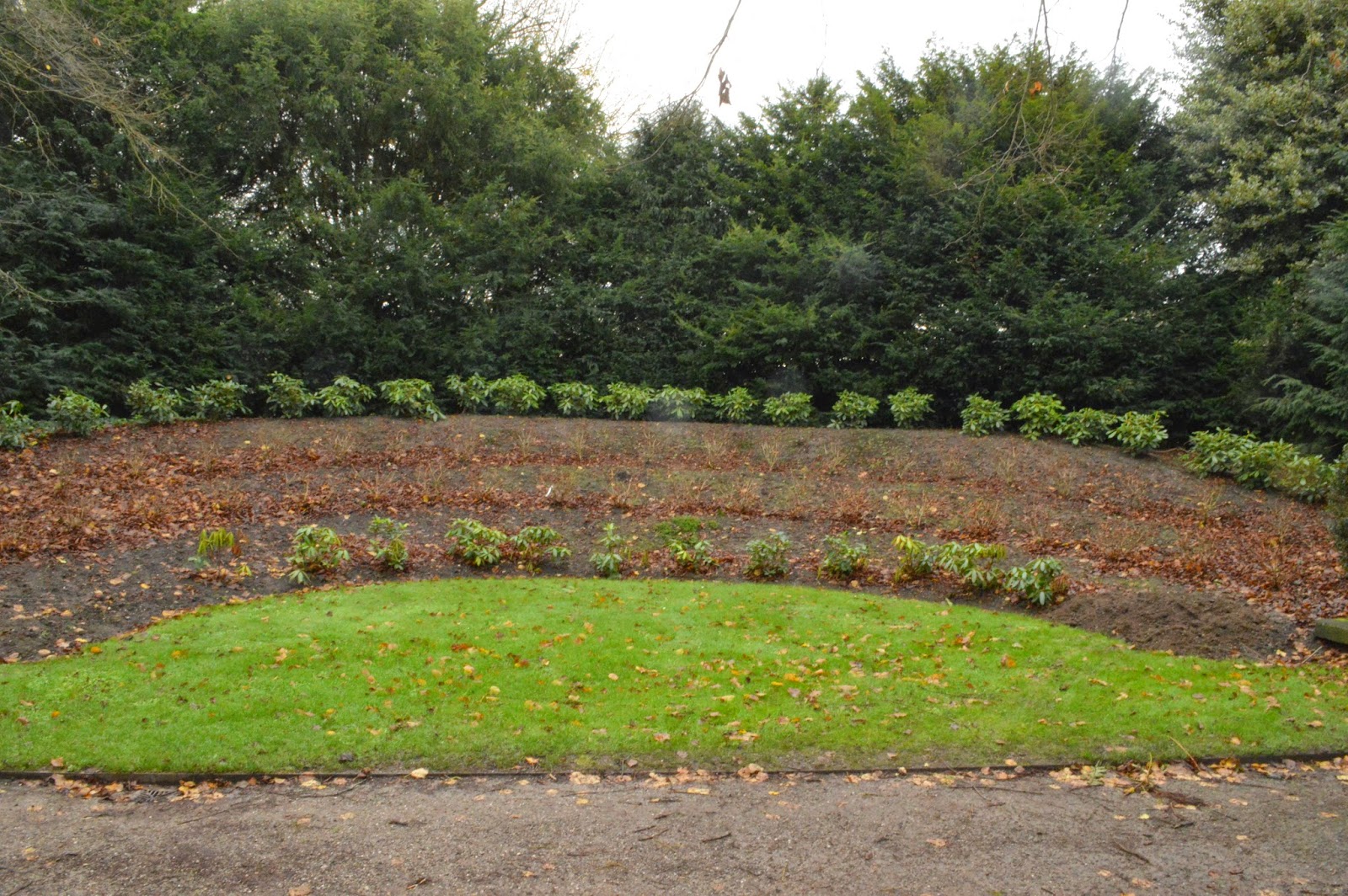 .... a garden of amphitheatres, 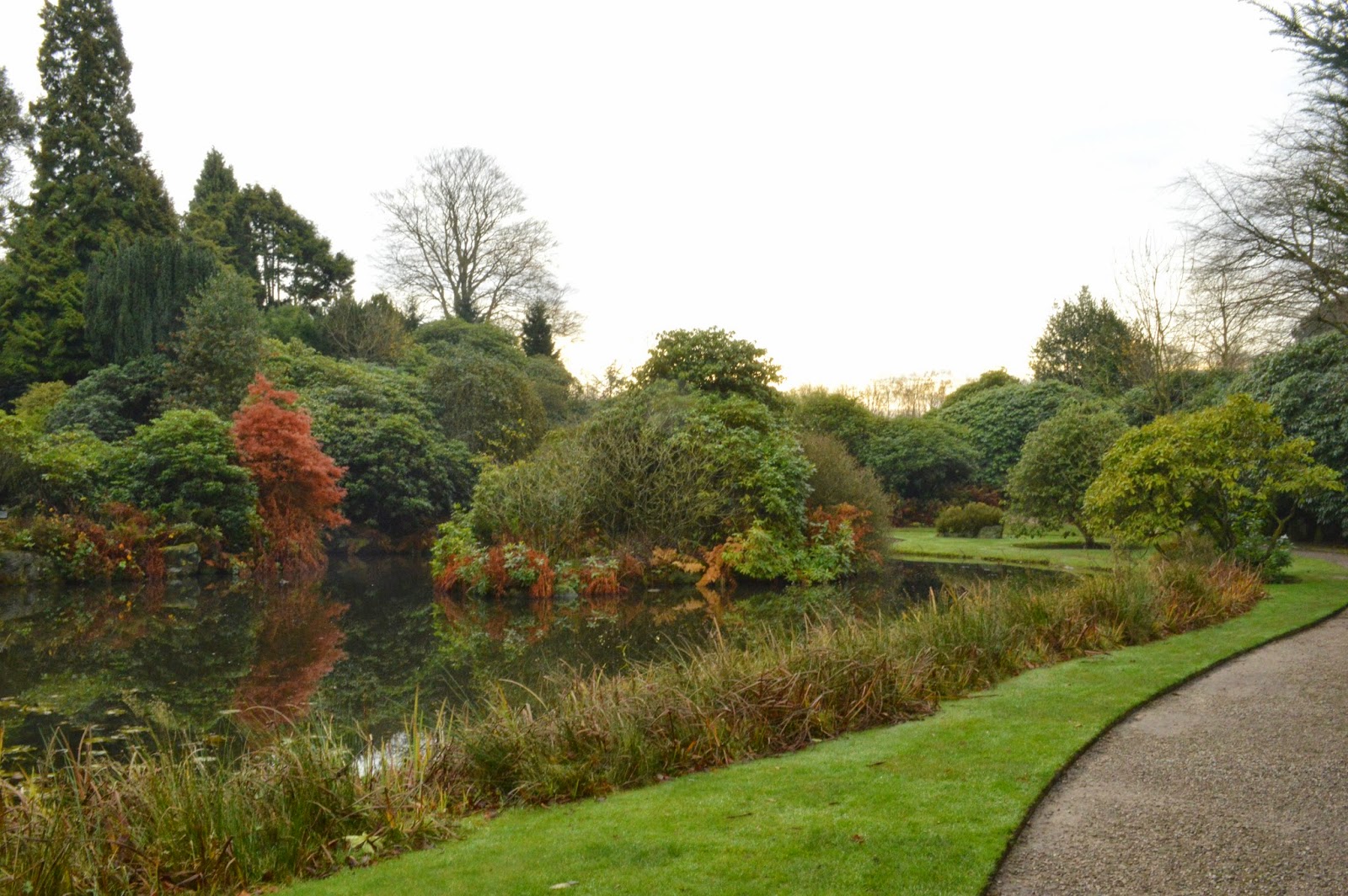 swooping paths around the lake, 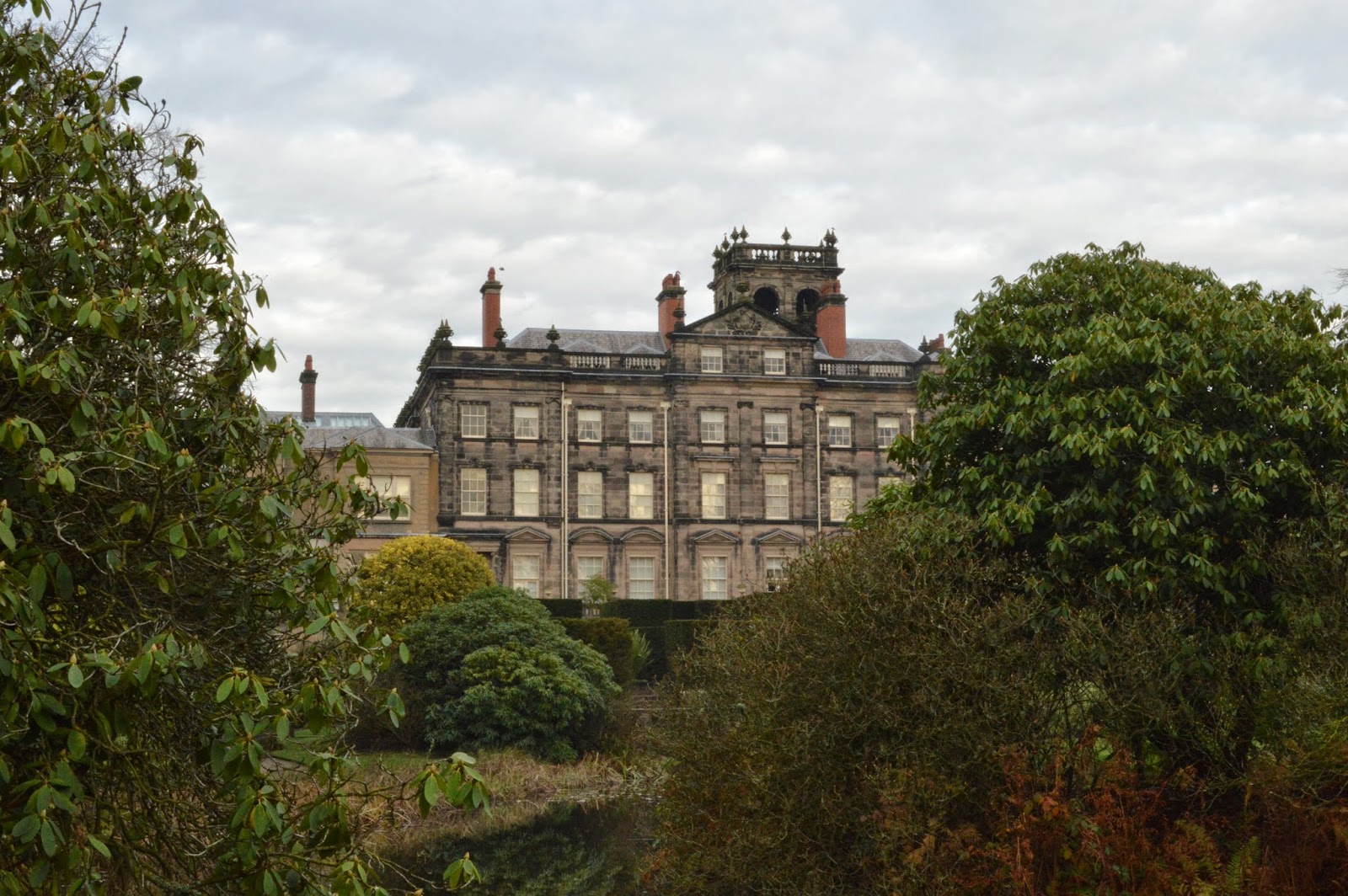 great views back to the house, 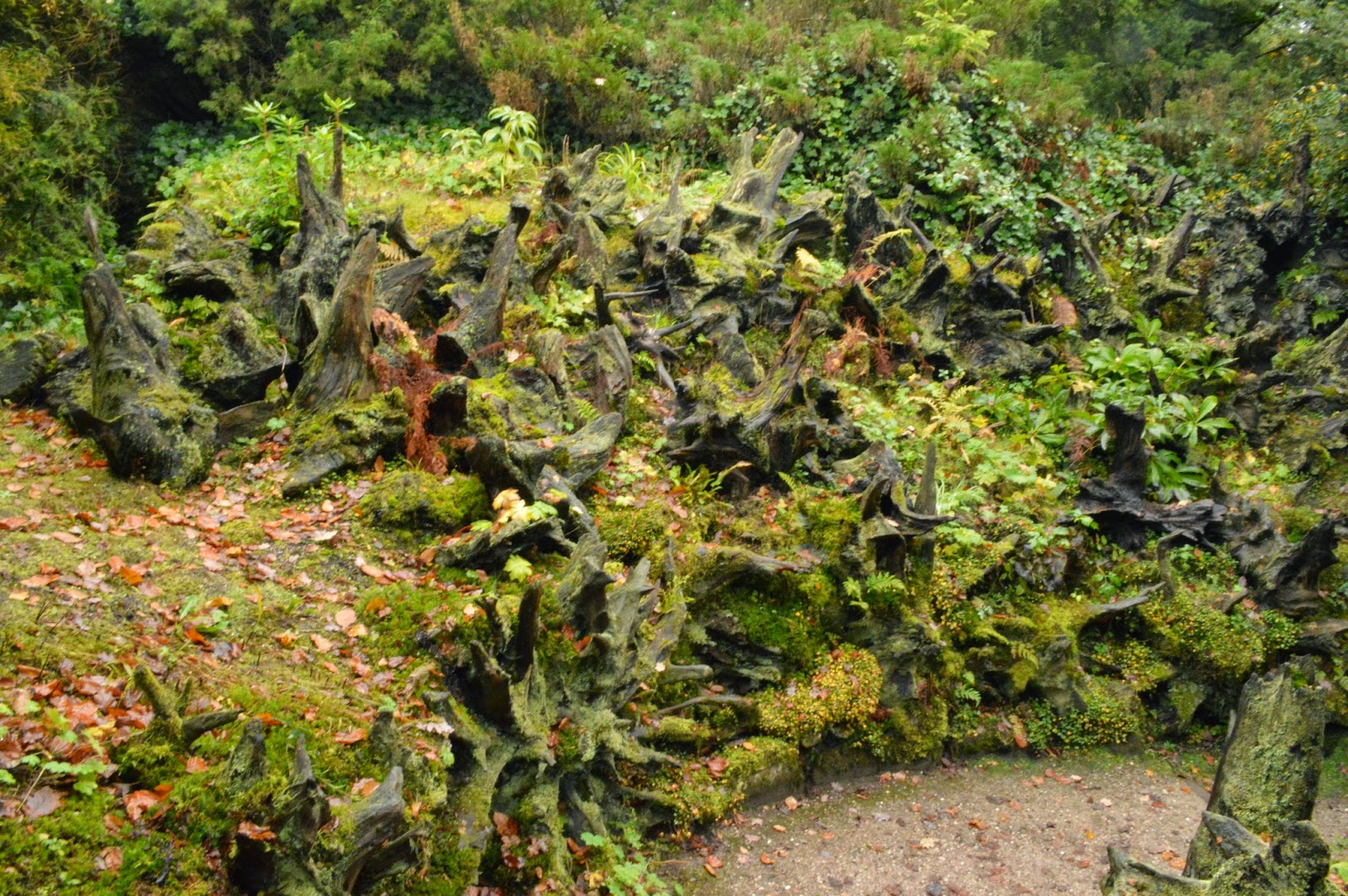 a stumpery to beat most other stumperies, 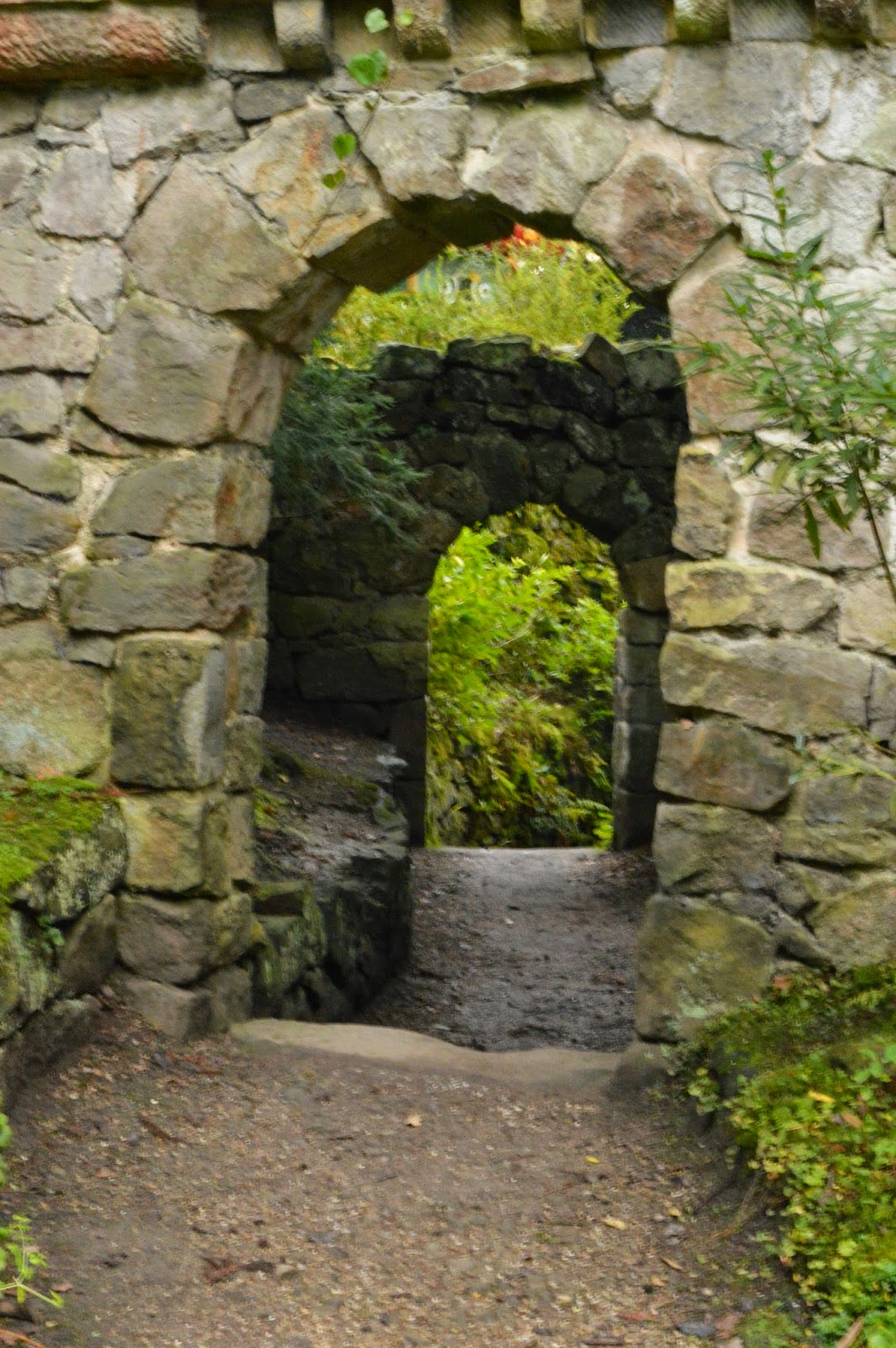 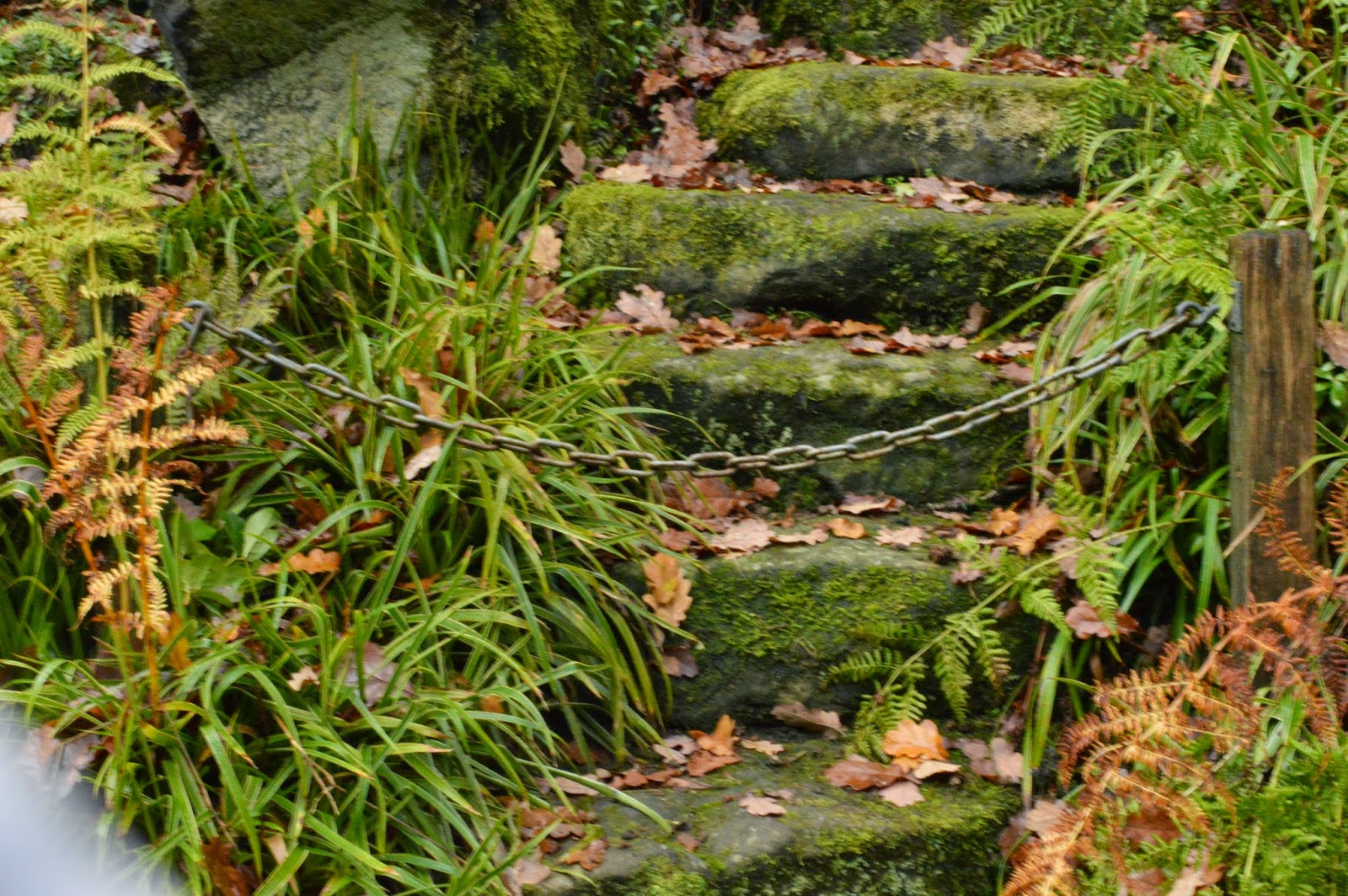 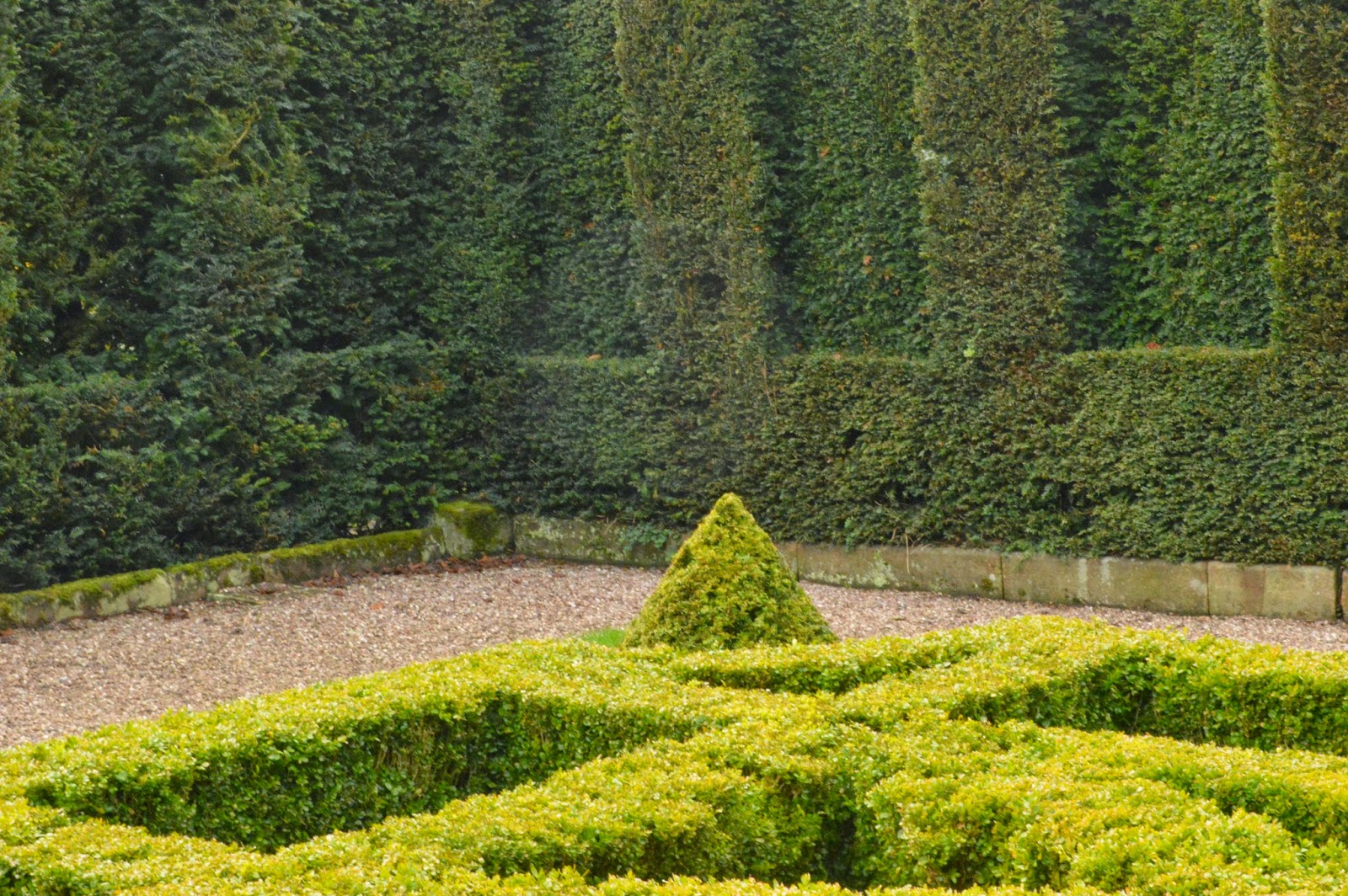 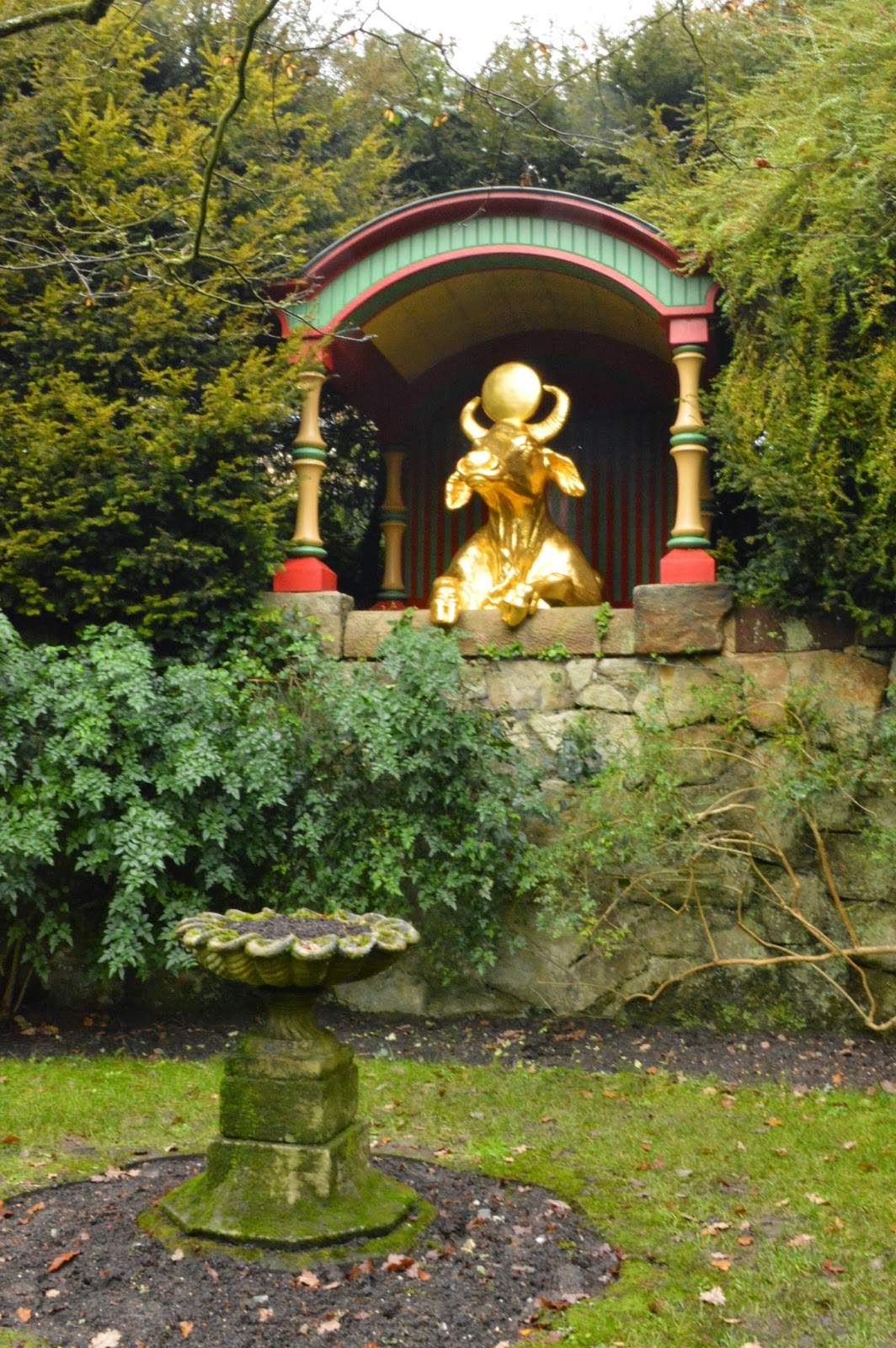 and the odd golden cow with a ball on its head peeping over a wall at you.  Yes it is Biddulph Grange Garden, a place I have wanted to visited for many years and finally got the chance to call in.  I was not disappointed.  It is often described as a great garden and that is because it is.  I was totally blown-away by it and this was without the benefit of dahlias in the dahlia walk. 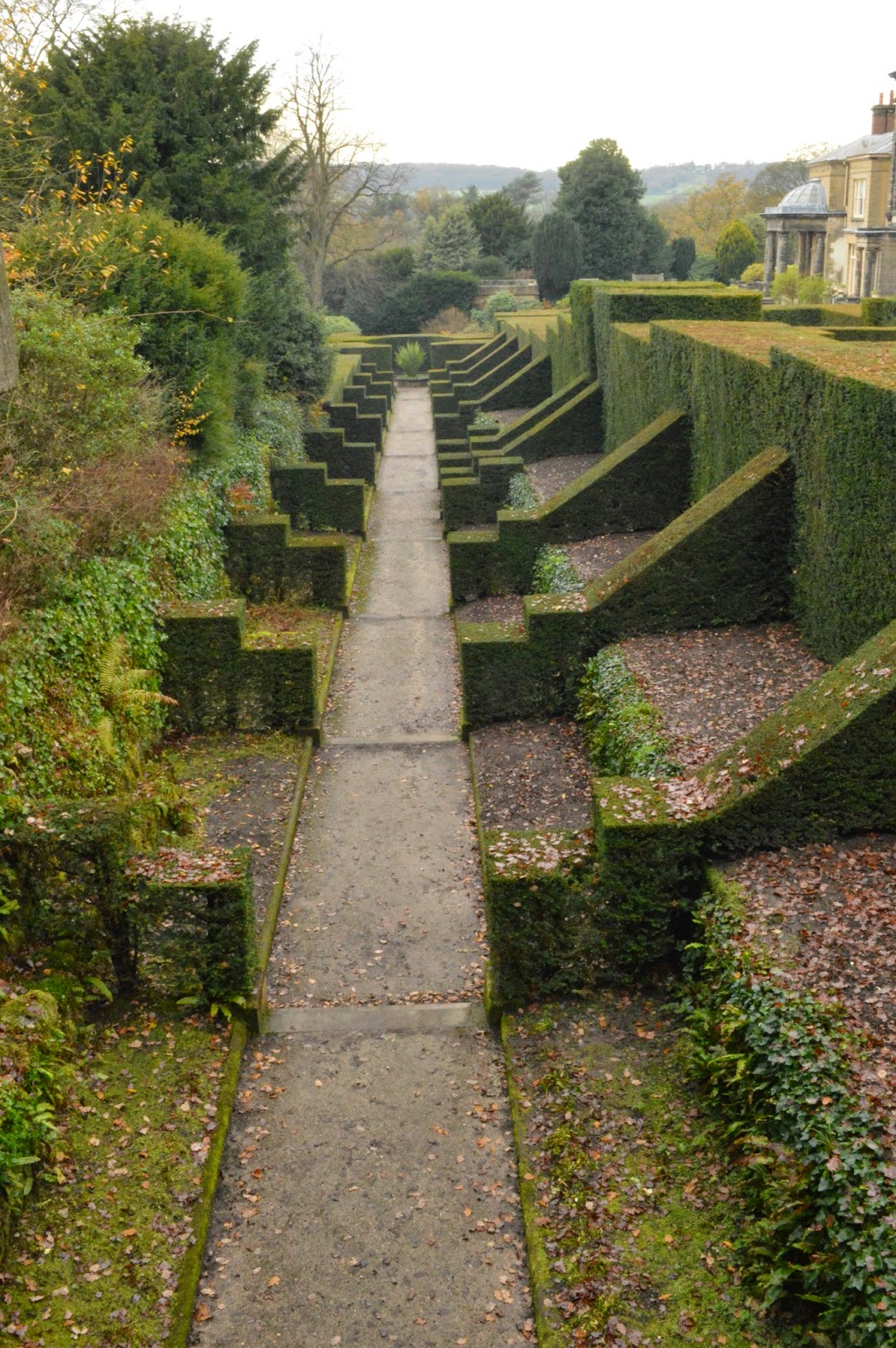 With hedges that precisely cut I almost wonder if you need dahlias? Though I know that with dahlias it is even more impressive and I will be going back to find out.

I am not going to bore you with all the usual photographs of this garden's many delights, but what I am going to say is that much of the delight for me were the things I was not expecting. 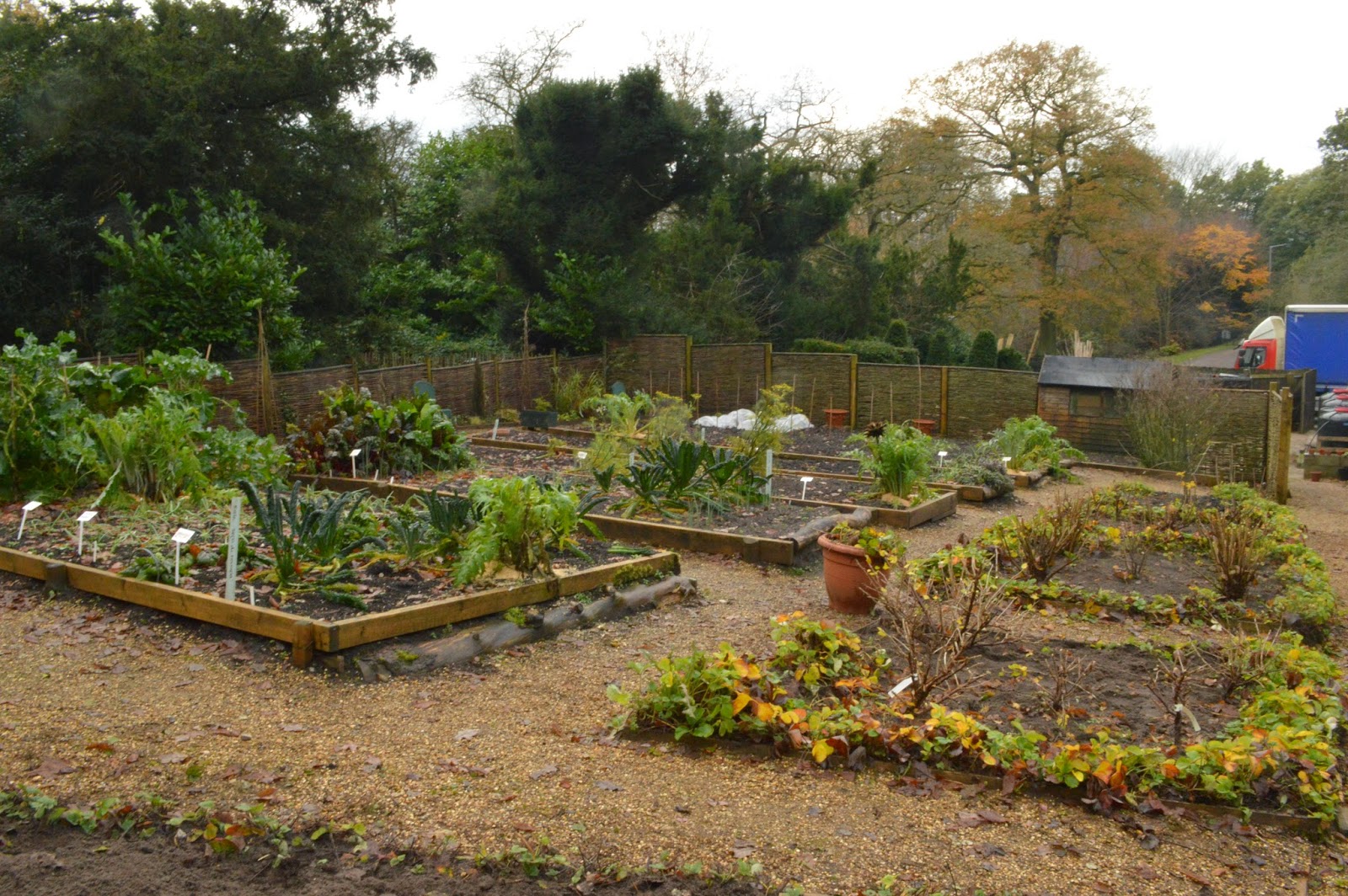 Such as the modest kitchen garden, almost apologetically placed around the side from the main garden.  Apparently the original kitchen garden is long gone and this is a fairly recent addition.  It was beautifully maintained and still had things to see even at such a late point in the year. 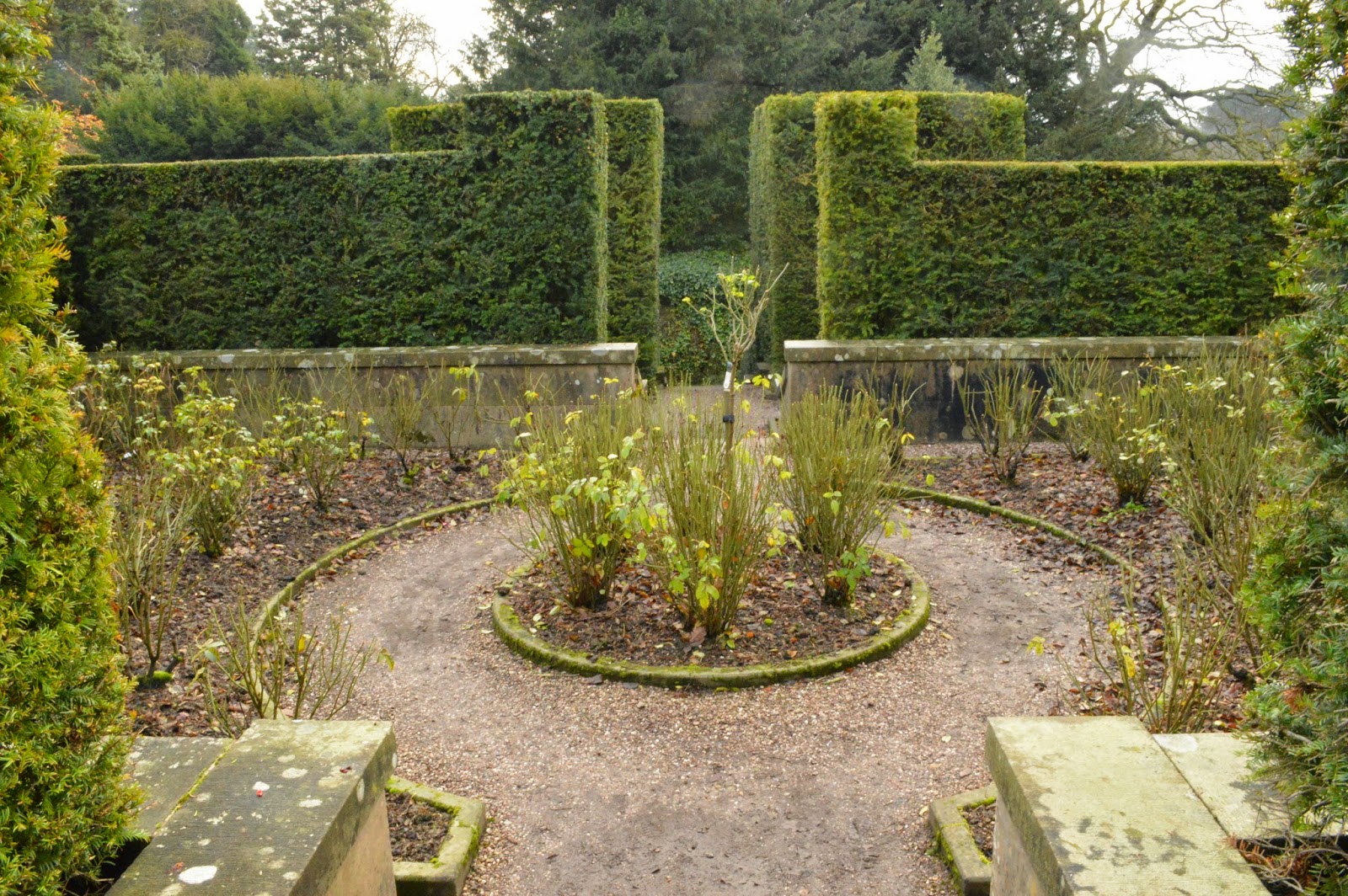 I loved this small, simple rose garden.  What a lovely place to sit in the evening and breathe in the scent. 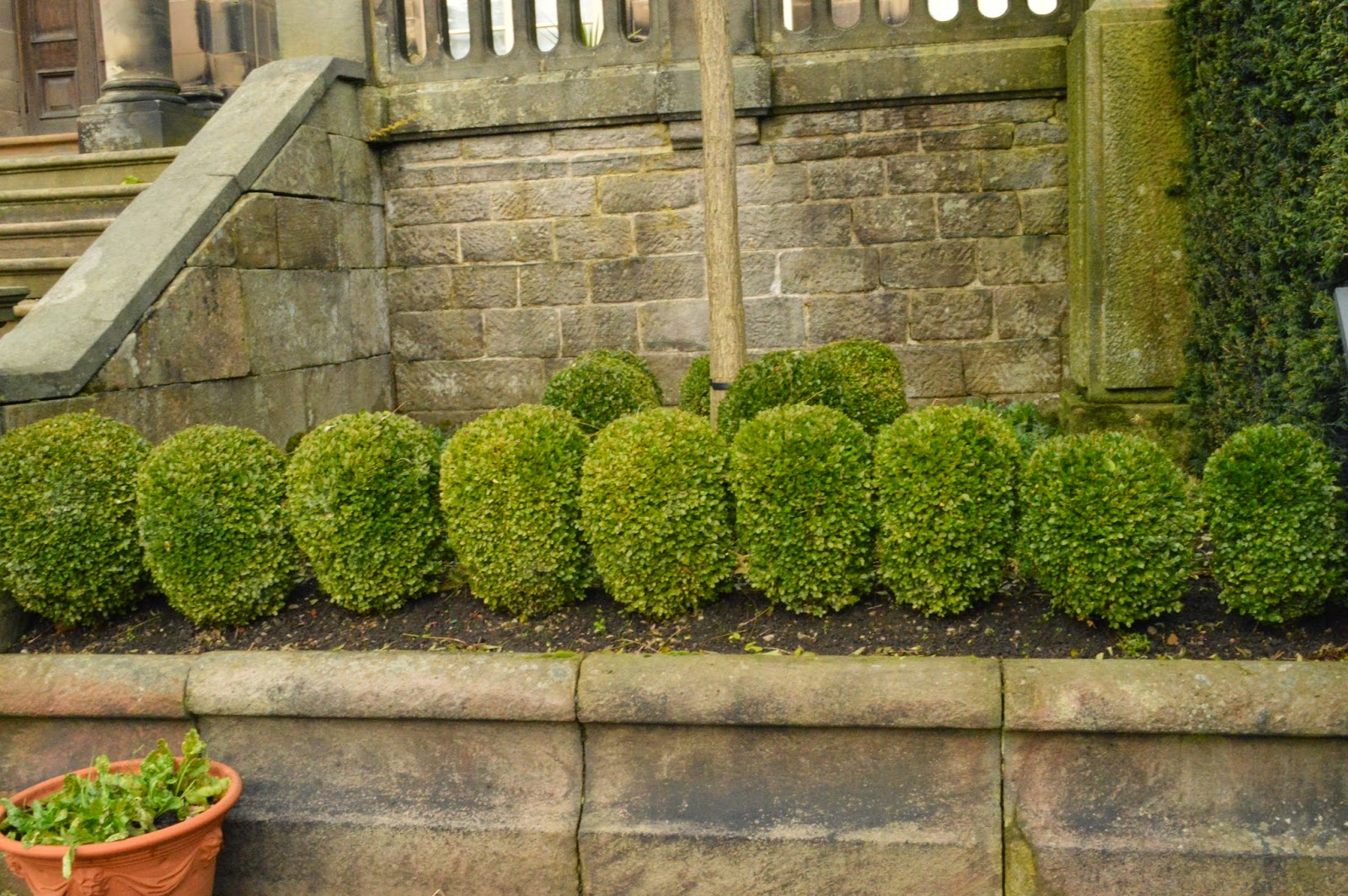 Details like these lumpy box-eggs made you aware that this garden was incredibly well looked after. 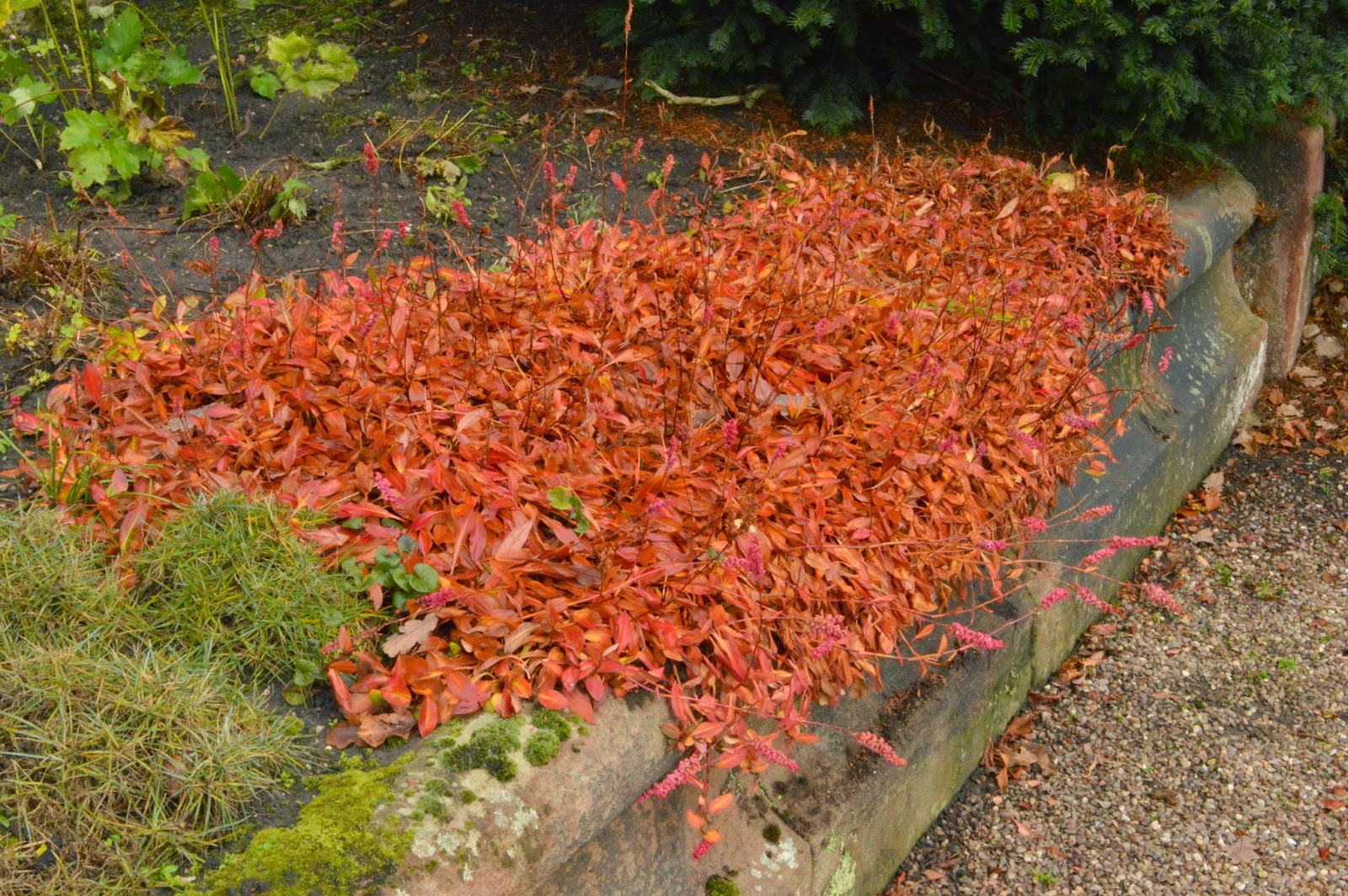 I loved this flaming persicaria, it was just sprawling over the lip of this wall, yet made such a wonderful splash of colour. 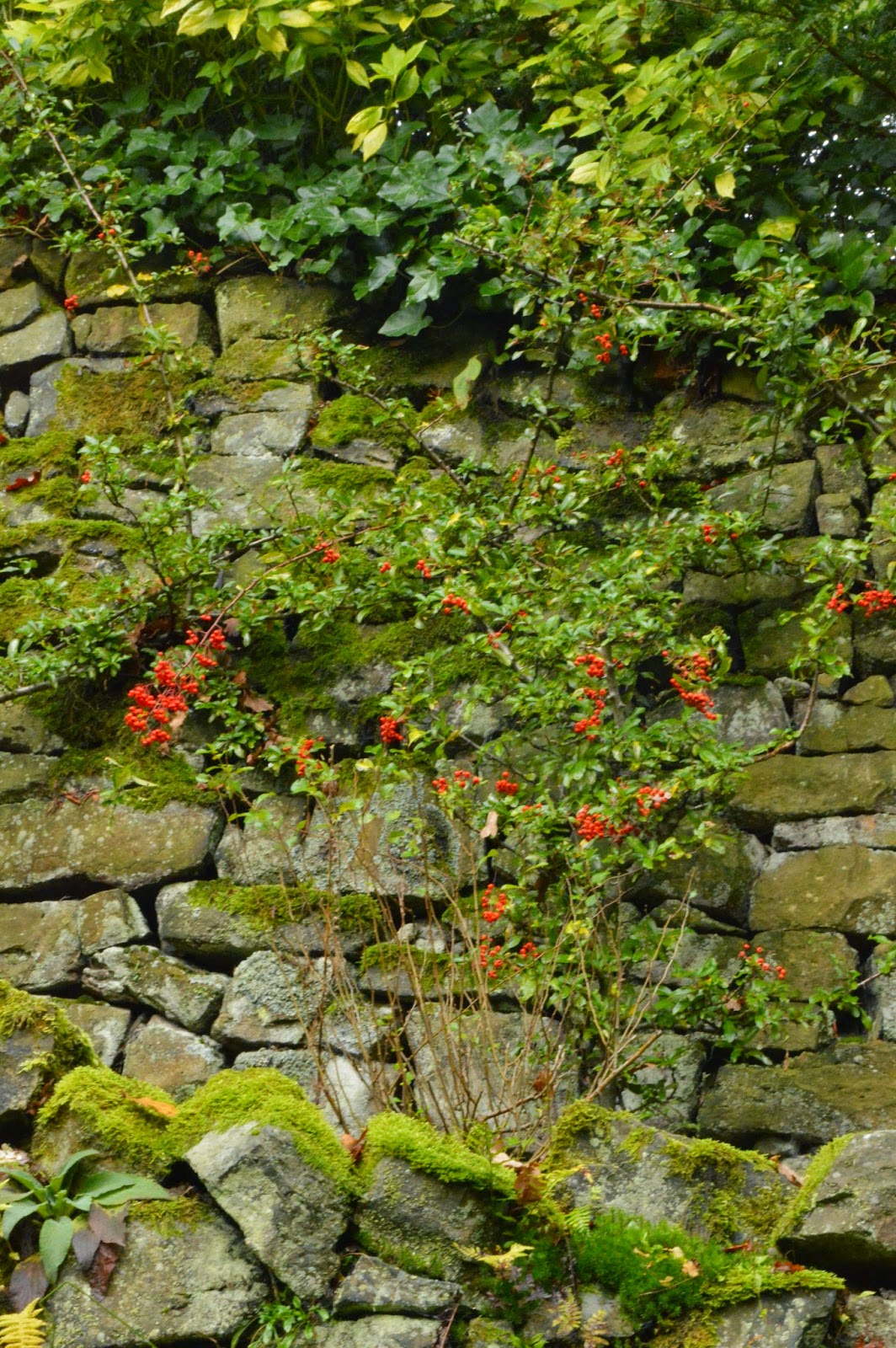 There were many mossy walls, this one was particularly wonderful with its berries and foxgloves.

It was a huge contrast to the earlier garden, it made the loss of the other garden even more poignant.  Of course Biddulph has had its own history of restoration and was itself lost for many years.  Maybe one day Crewe Hall will have its gardens restored.  We can only hope.
Bateman Biddulph Grange Garden Capability Brown Crewe Hall Repton