A wander around Stoneywell Cottage, Ulverscroft

November 13, 2014
Stoneywell Cottage is the first house for the National Trust in Leicestershire and the nearest one to where I live.  I was rather excited to read about it when it was first announced and when the chance came up to go and visit I eagerly agreed. 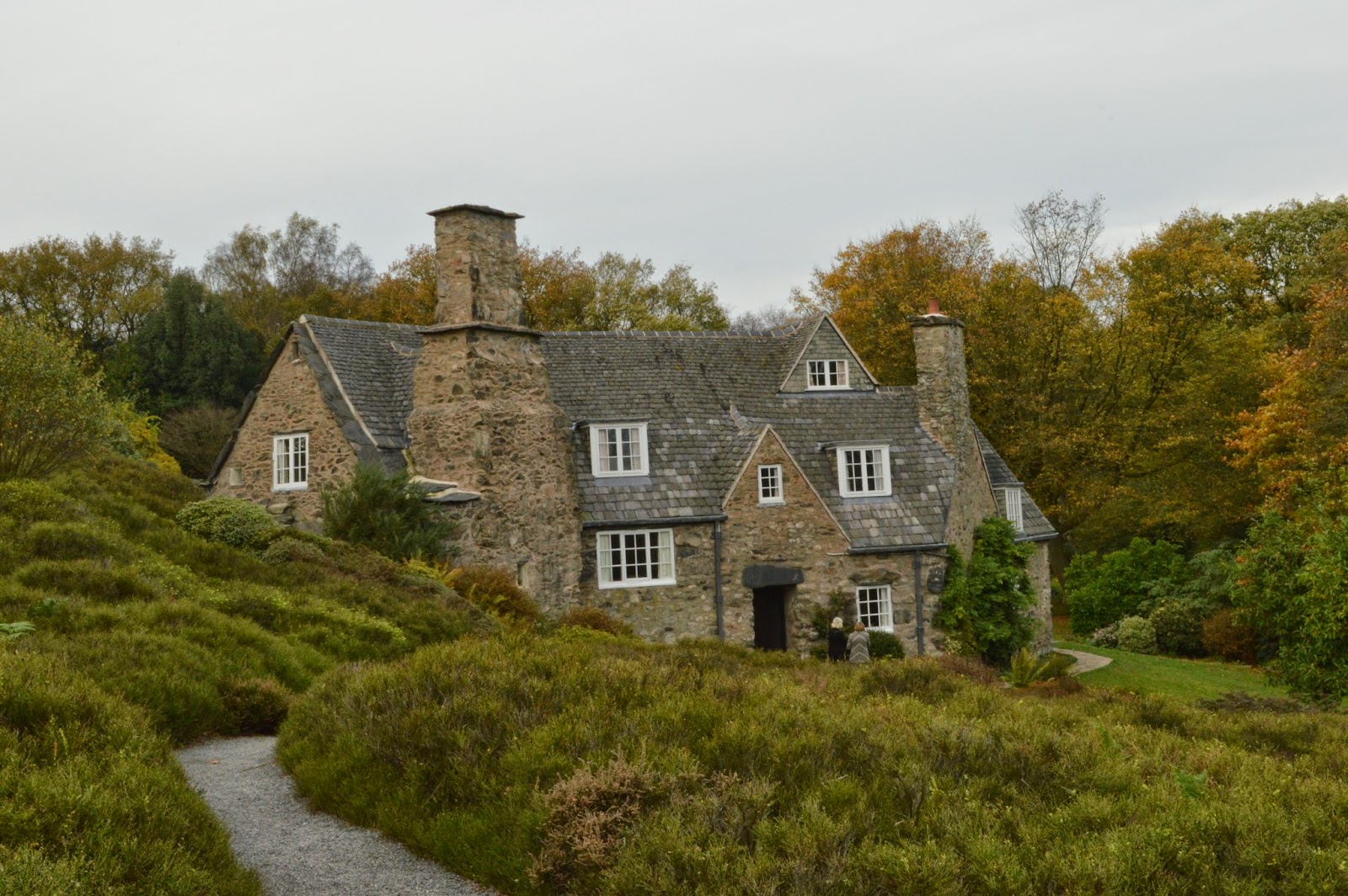 I am not going to go into too many of the  details of the house, it was designed by Ernest Gimson (architect and furniture designer) for his brother Sidney and family as a summer home.  The Gimson family were Leicester based engineers and owned a large foundry in the City.  It is a fine example of an Arts and Crafts cottage and contains many beautiful examples of furniture.  The National Trust in agreement with the last owner have largely furnished it as it looked in the 1950s as that is when the last owner felt it was in its heyday for him. 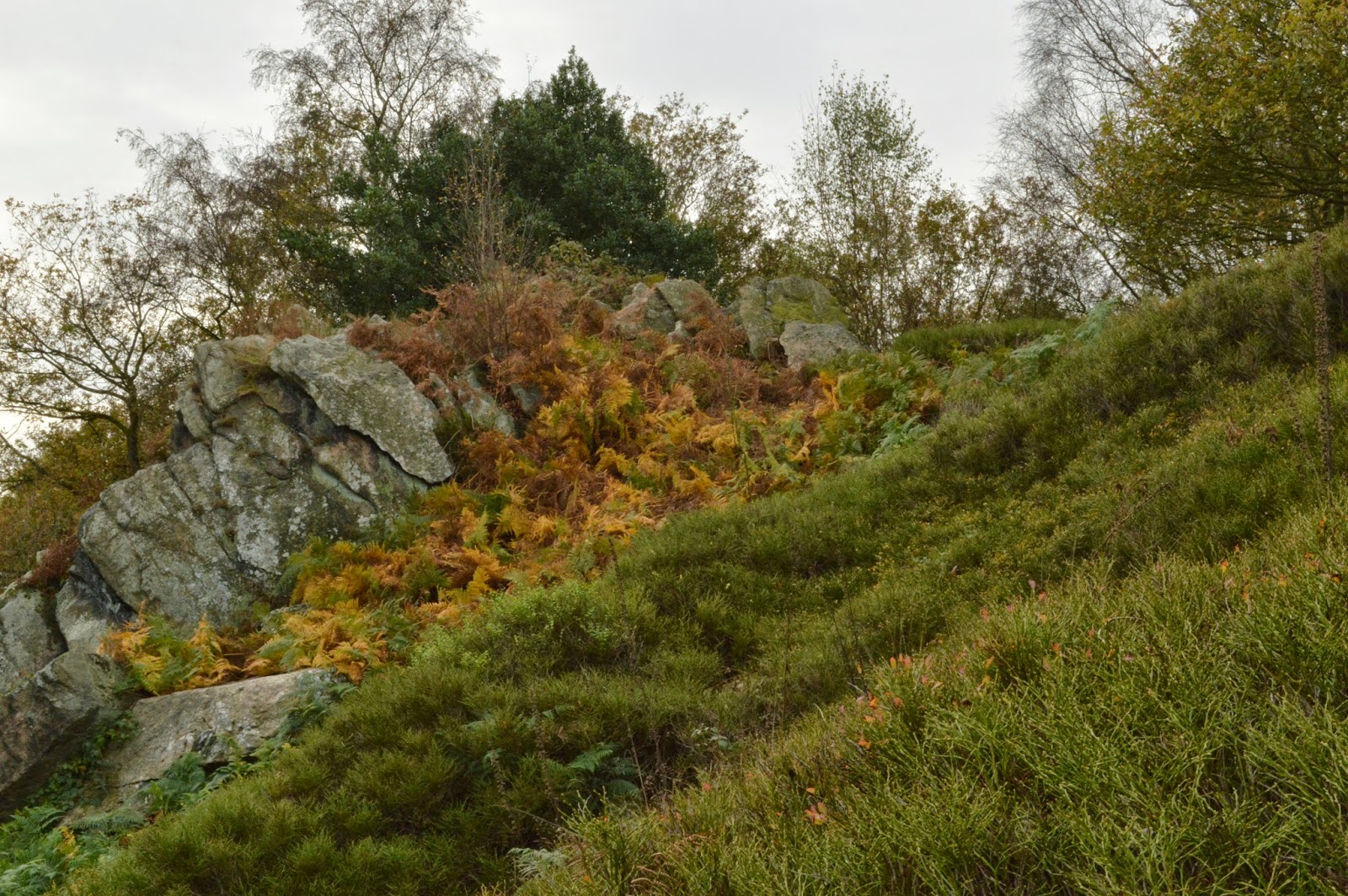 The house is in the most beautiful landscape and nestles perfectly.  It does not jar and seems to flow almost out of the rock that surrounds it. 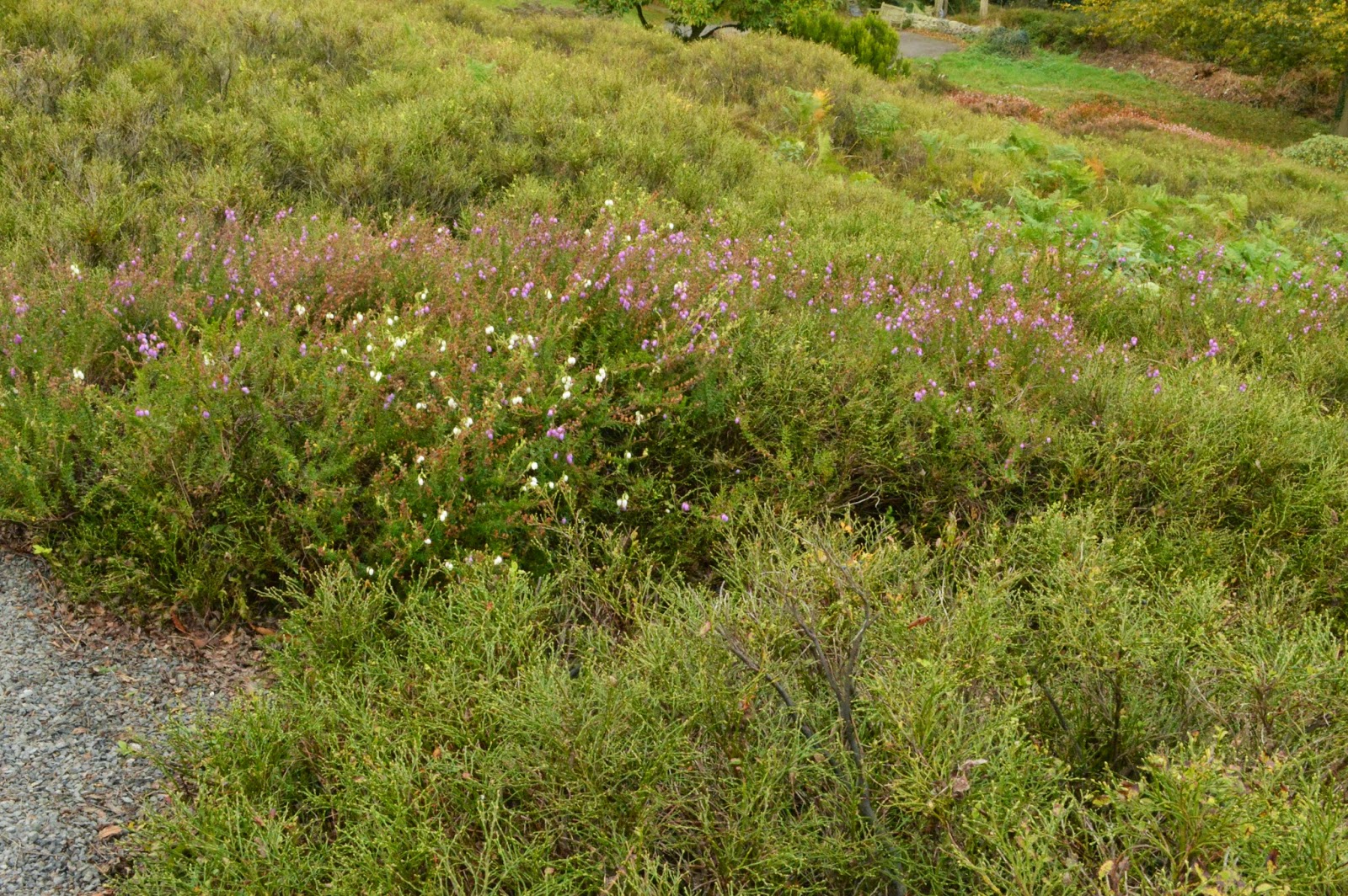 The house is surrounded by heather and bilberries. 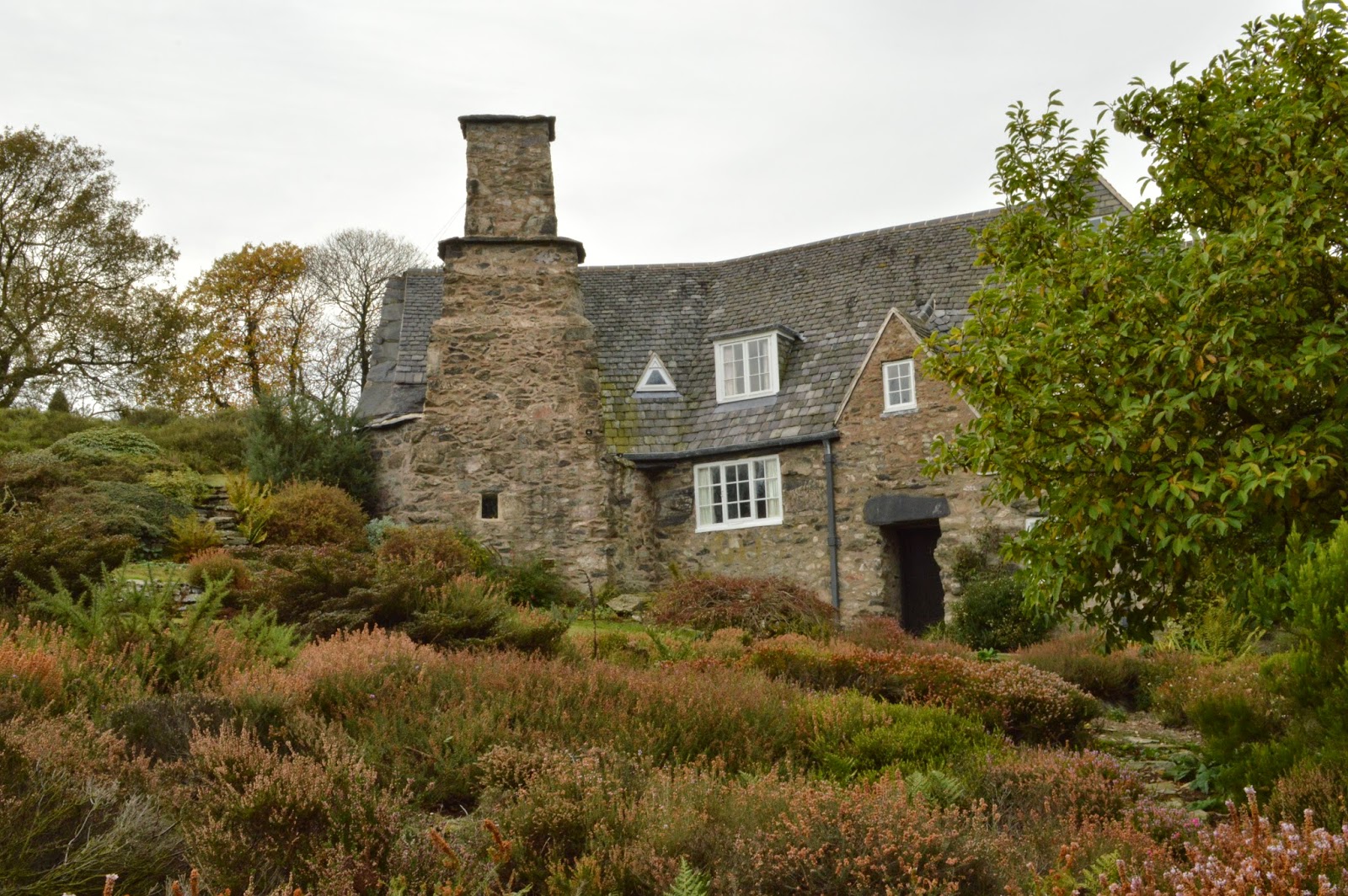 The heather was fantastically beautiful, ignore that grotty stunted stuff you see in garden centres, this was heather running wild and free and looking amazing. 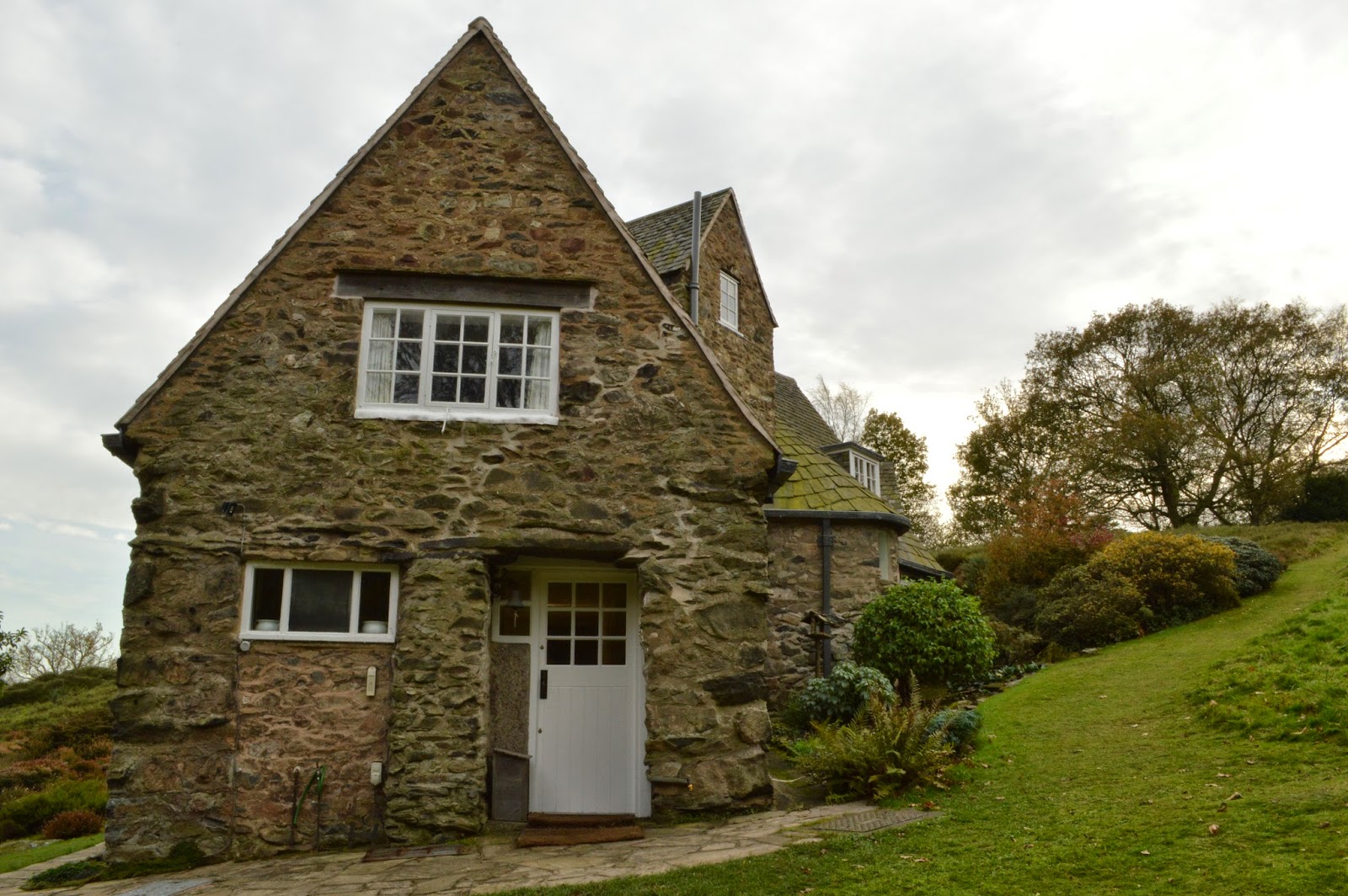 The paths and planting curve around the house with a wonderful fluidity.  You could see a designers eye in the effortless yet clearly not accidentleness of it all. 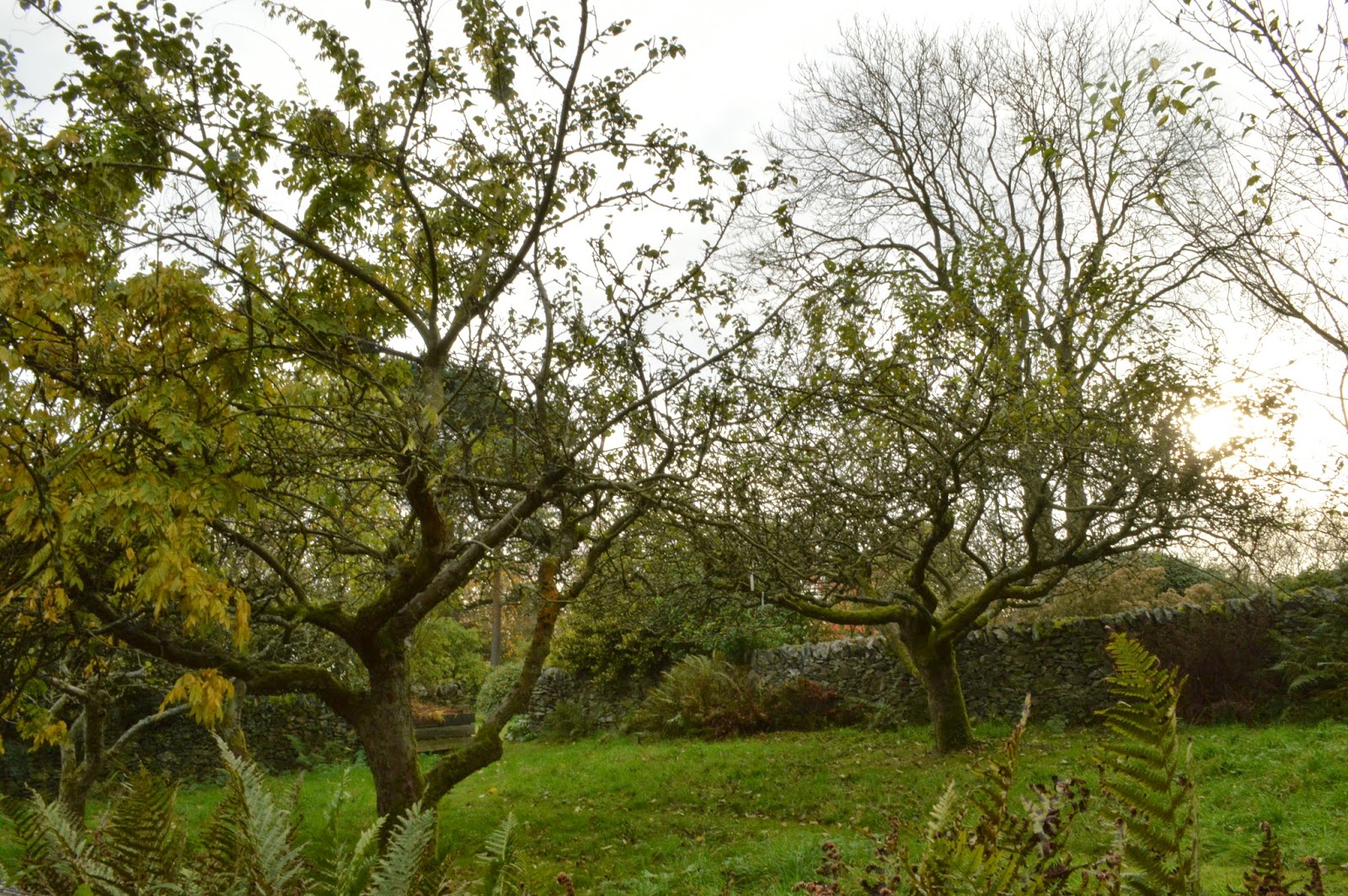 There was a pretty little walled orchard.  There were many dry stone walls all around.  They are an important feature of this landscape. 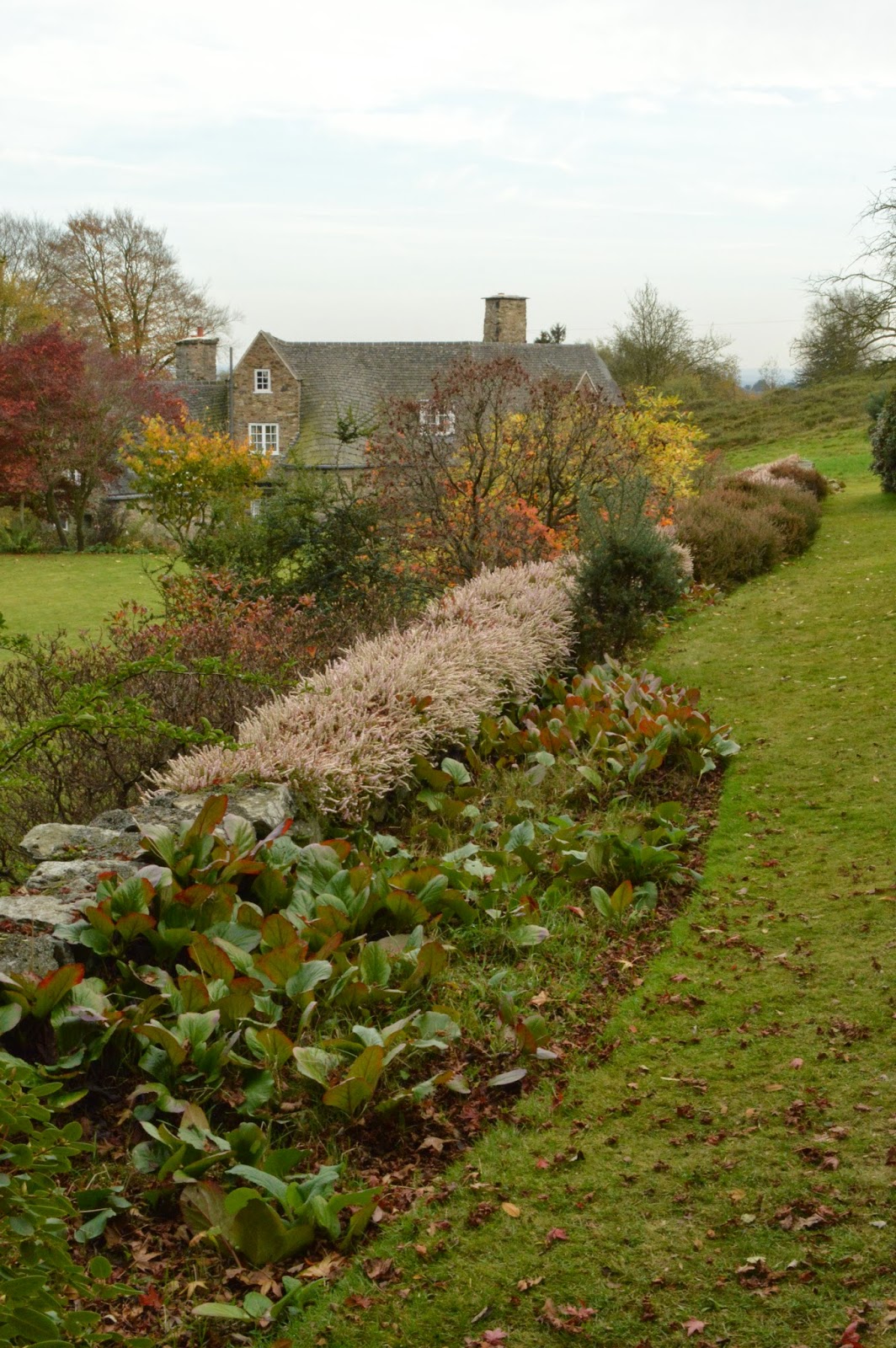 As we walked along we were stopped in our tracks by this heather covering this dry stone wall.  We had to get closer and admire it more. 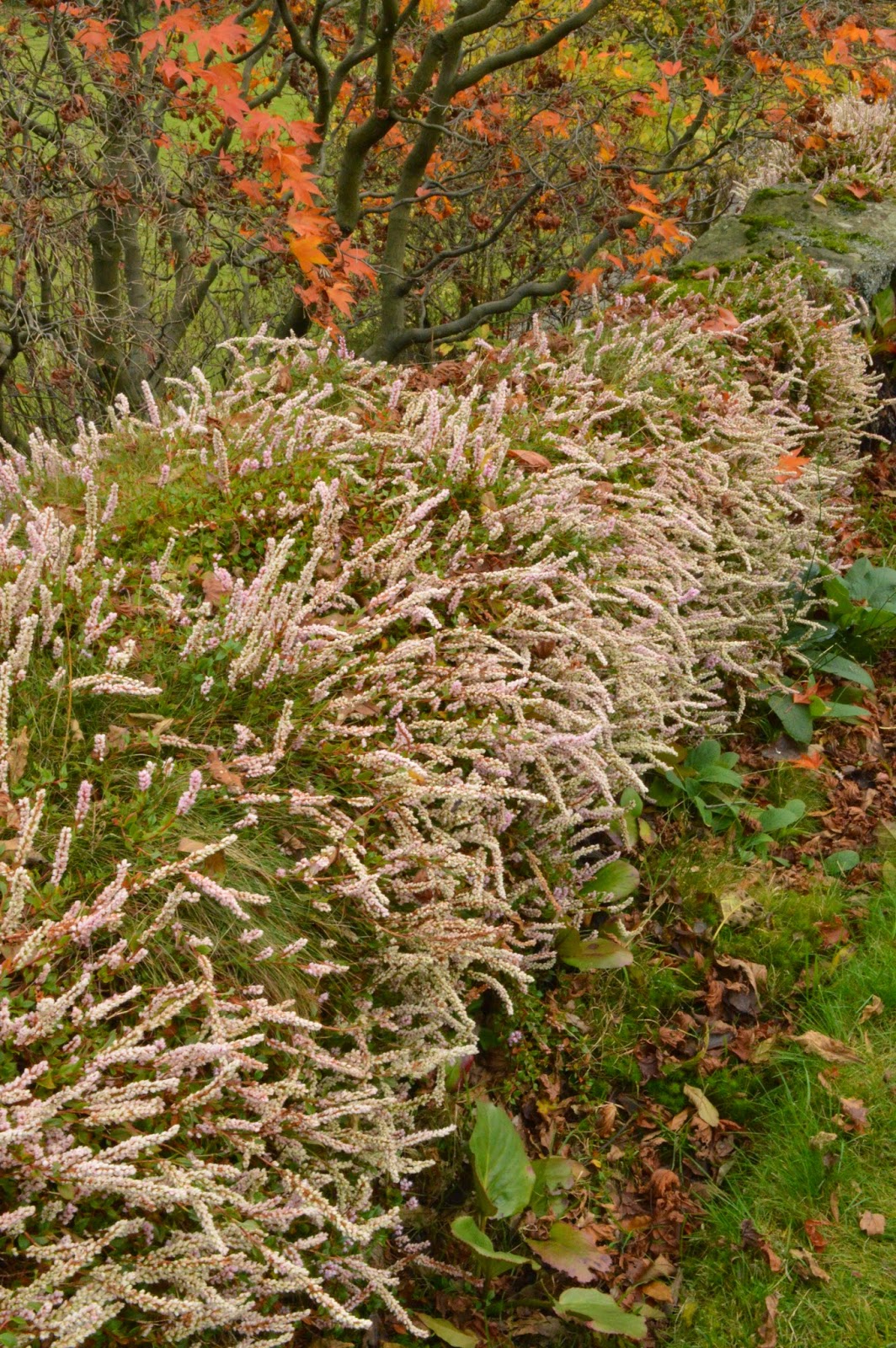 Only to discover it was not heather at all, but a delicate pale persicaria.  How beautiful is this? 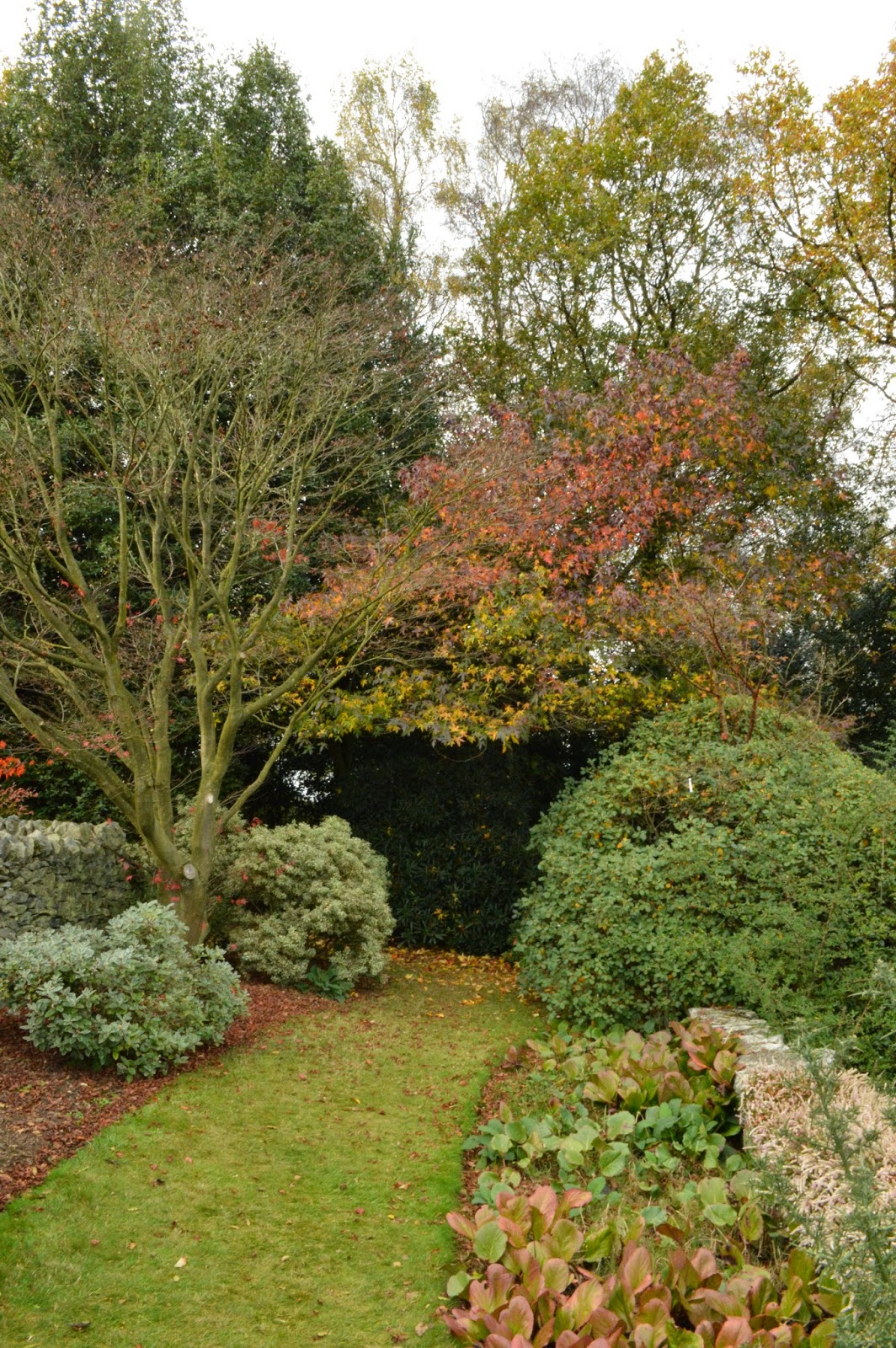 The garden contained many acers and this flaming Liquidamber. 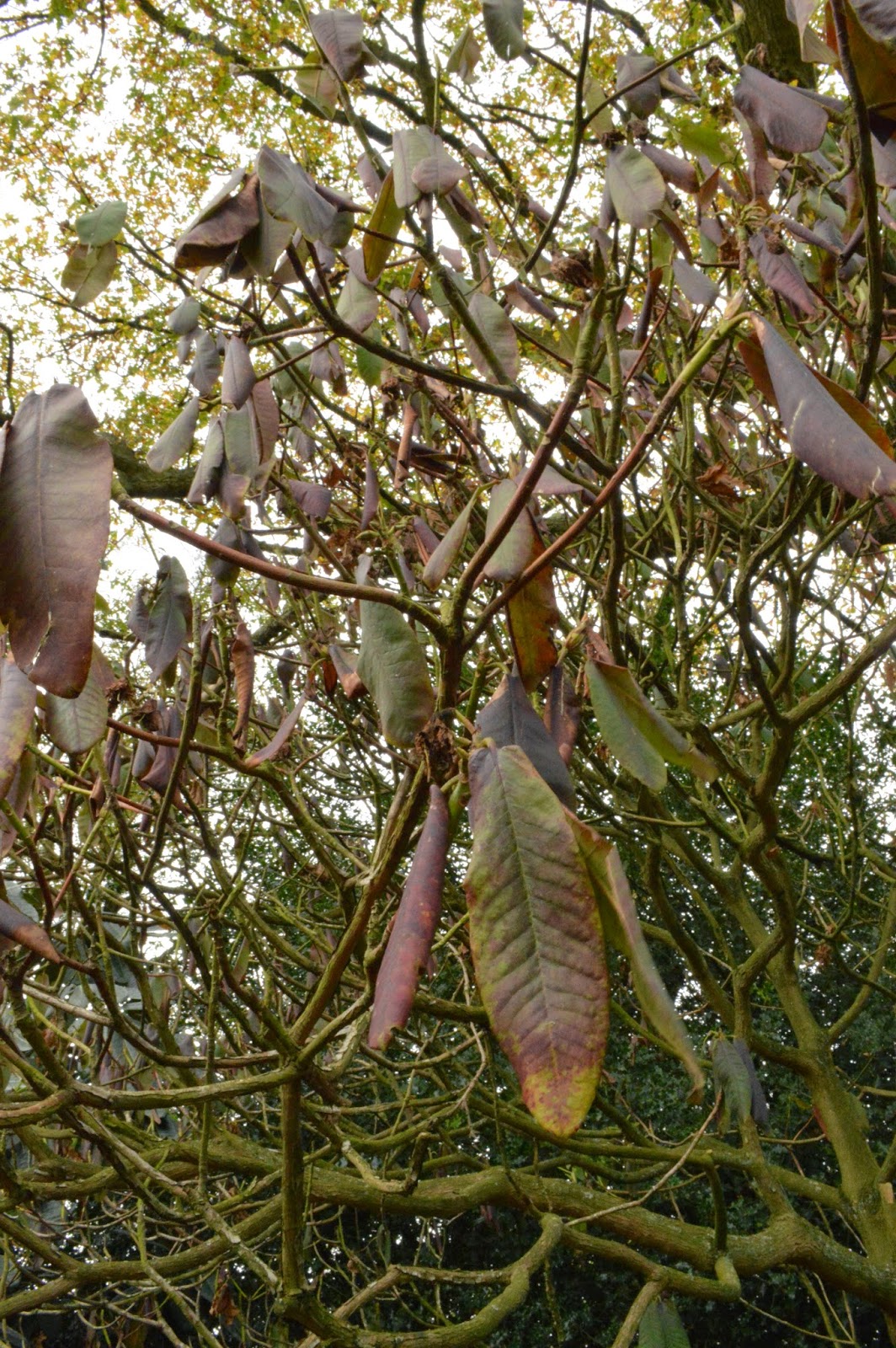 We worried a little at the state of this large rhododendron, it looked like something had tried very hard to kill it.  It might be some sort of virus, it might just be wind-damage or drought, but it looked very poorly in places.  Thankfully there was also some new growth and buds ready for next year.  I shall keep my fingers crossed for it. 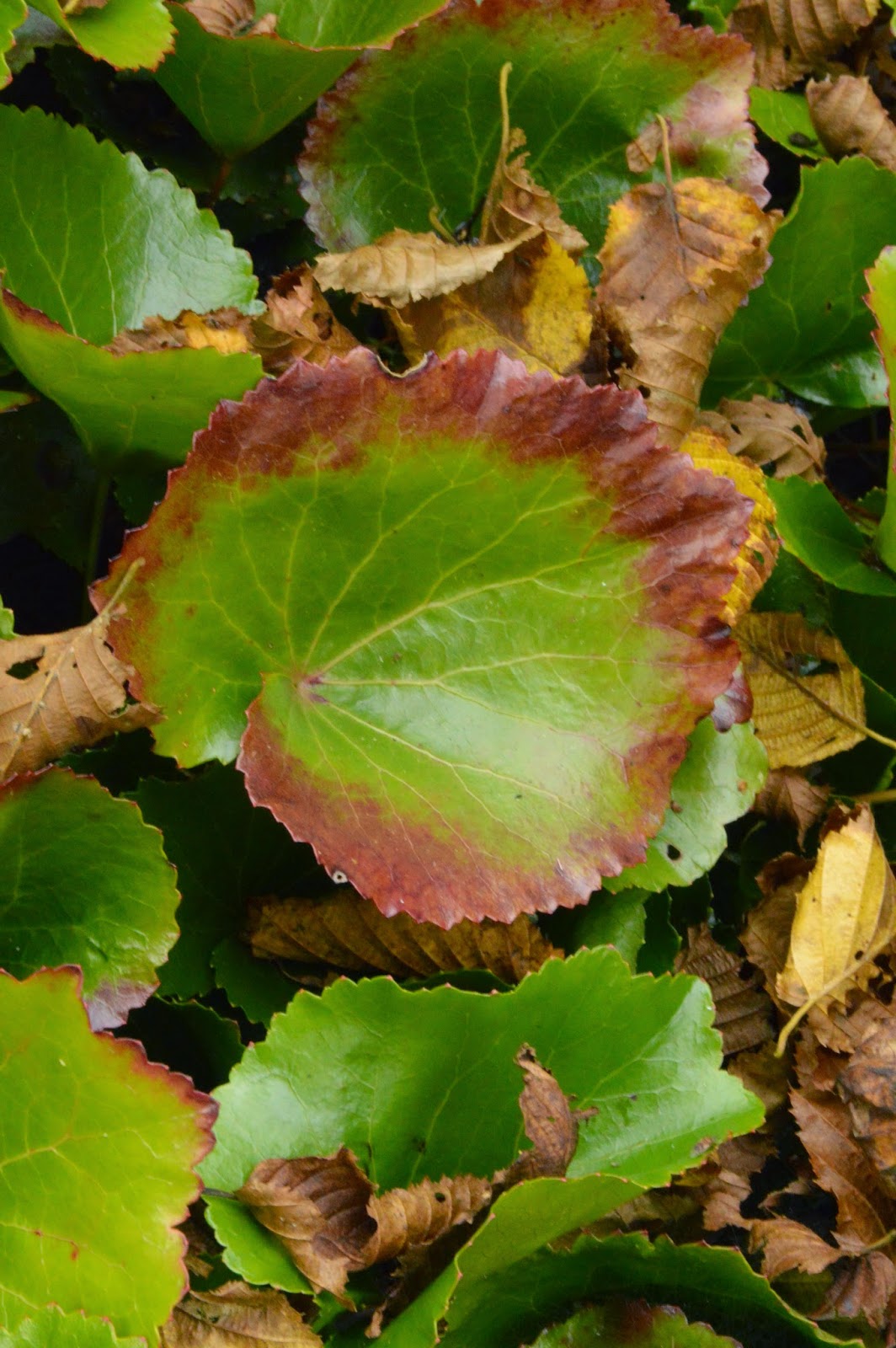 In many parts of the garden was this rather find little plant.  It clearly spreads well and we wondered what it was.  It looks related to a Bergenia, but also we thought a little Asarum-like.  We decided it was some sort of composite cousin.  If you know what it is please tell me.

There was much more to see apparently the daffodils in Spring are a sight to see.  There were many camellias, magnolias and rhododendrons as well.  I will be definitely returning.
Arts and Crafts dry stone walls Gimson National Trust persicaria Stoneywell Cottage