You know when you go to garden centres and various other worthy outlets you sometimes see those stone owls?  I have looked at them for many years and thought how much I wanted one, yet never quite got around to buying one.  Then some weeks ago I was at Calke Abbey and they had some in the sale, well it seemed like fate, this was the day to buy.  After a very brief look I knew the owl for me, picked him quickly in that 'what if someone else picks him up before me' manner, and wandered around clutching him in a possessive manner until the choosing was done and I went to pay.  It was sort of like being the Log Lady, but with an owl instead.

I love my owl.

Then I went to Haddonstone Show Gardens where I also became enamoured of an owl.  No idea why this is happening, I have not had a compulsion to buy owls particularly before.

Then I had to find somewhere for them to live.  I thought they ought to live together really so they could form a parliament.  It did not take long for me to realise where they had to be. 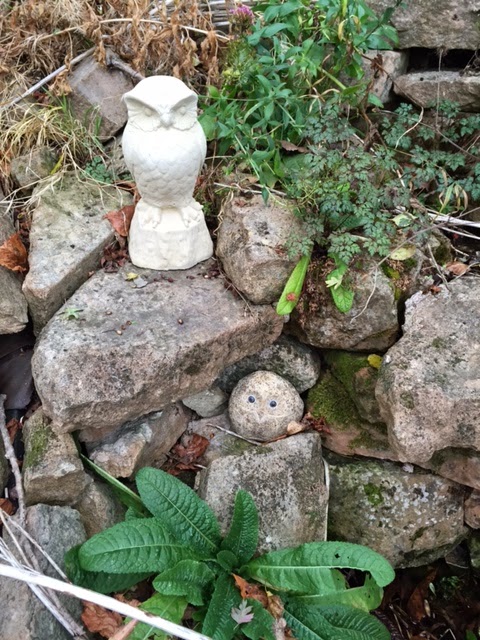 They have been placed on the pile of rocks that occupies the top right hand corner of the garden.  These rocks are weathering in well now and getting more overgrown, something I am encouraging as they are an ugly reminder of the now removed stream that was briefly part of the garden.

The moment I positioned them my mind went straight to the Alan Garner book, The Owl Service and in the same moment the 1970s television series of the same name.  I have happy memories, but slightly scared memories of both.  Yet I look at my owls, who (hoo) I now refer to as the Owl Service and they make me smile.  I cannot help but wonder if there is a third owl out there just waiting to join them.
owl service owls parliament of owls rockery